After a gruelingly stressful month or so for each of us, on Friday, May 20, Sean and I bid our cat Elsa goodbye and hopped in an Uber Taxi to Chicago O’Hare International Airport. We were more than ready for eleven days in California.

We arrived two and a half hours early for our 9:15am flight because the TSA lines at O’Hare had been so bad in the previous week that they’d made the national news. Turns out we needn’t have worried. From the time we got in line until the time I had retied my boots was a cool sixteen minutes. A local news crew was there filming the lack of lines at security. 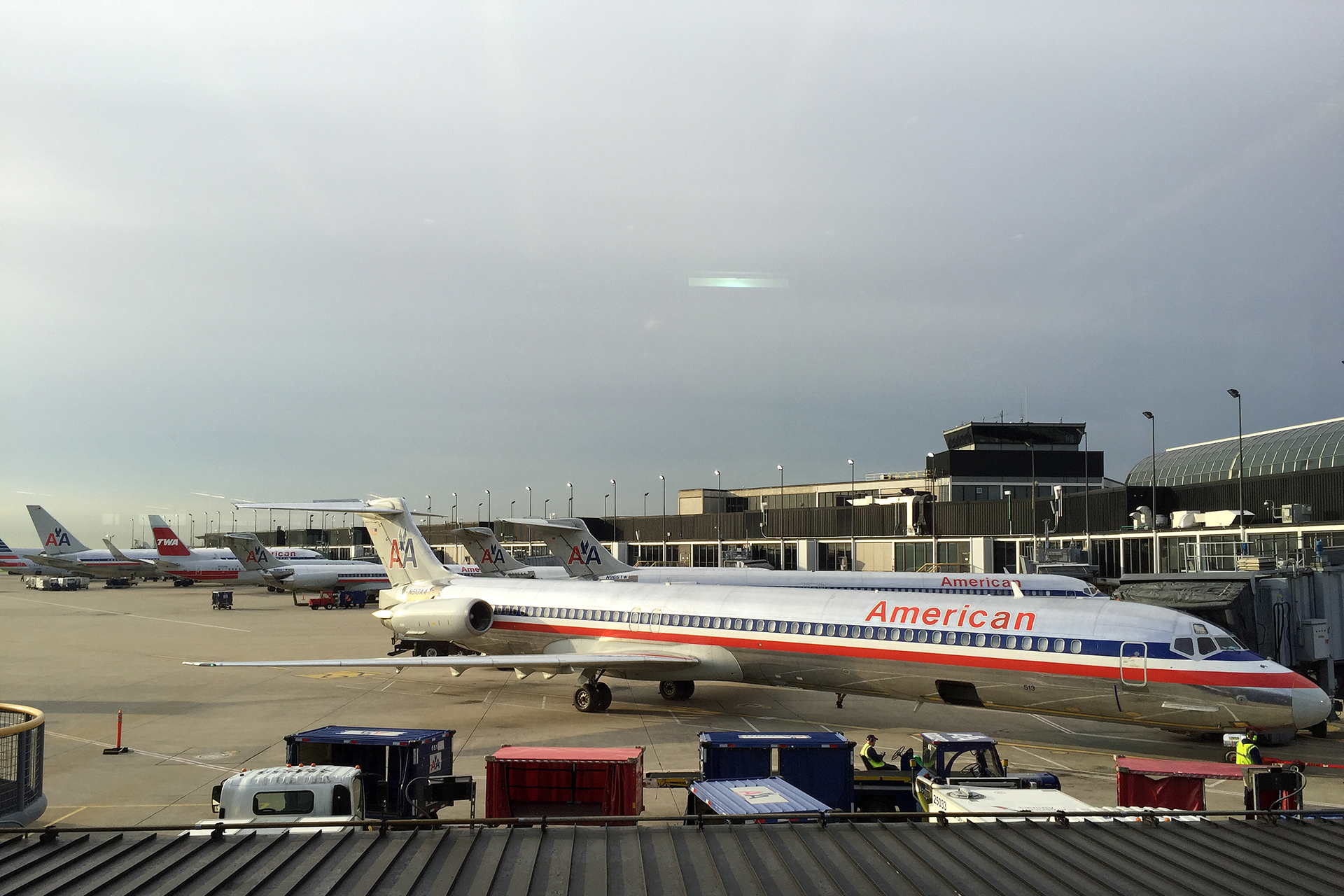 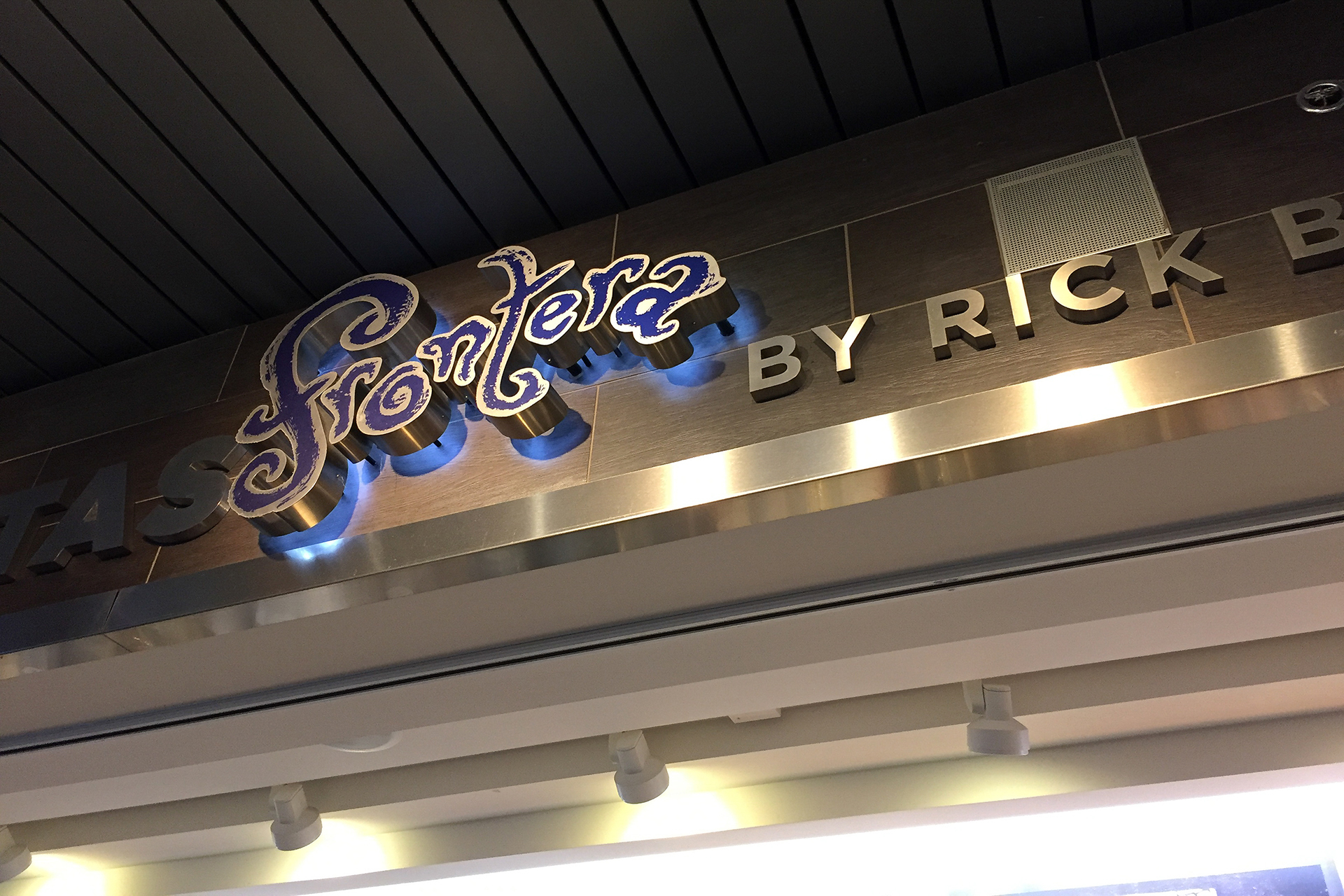 Once through security, we got breakfast sandwiches and our traditional margarita at Tortas Frontera before heading to our gate. We were on a new 737, so I was able to follow our flight’s progress on the seat back screen. Passing over southern Utah, I am convinced that I saw Bryce Canyon National Park from the air. The red rock contrasting with the deep green of the forest and its sweeping southeast orientation make me pretty certain. Farther on, we passed over Lake Mead and could see Lake Havasu on the Arizona/California border in the distance. 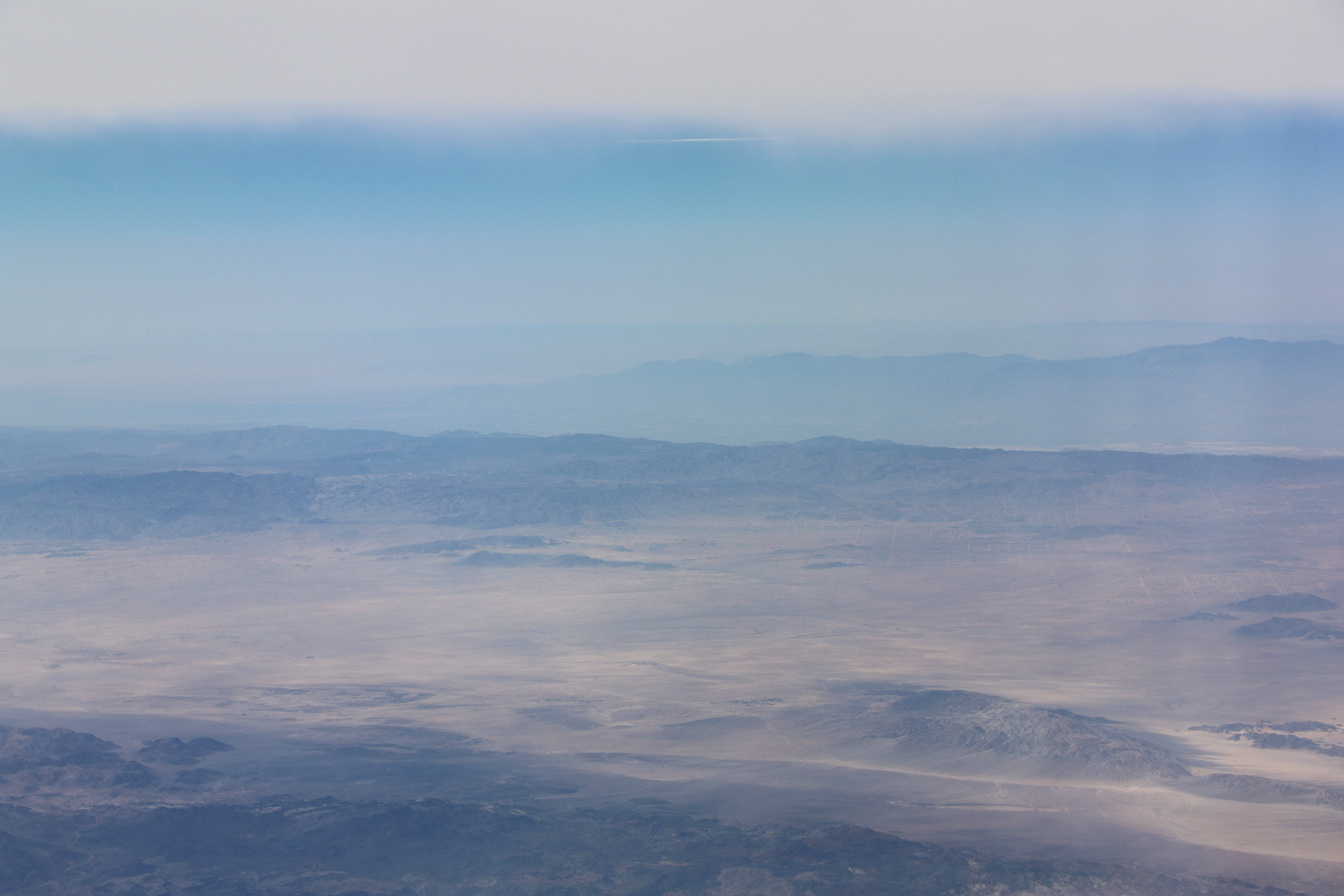 Then we passed north of Joshua Tree National Park as we crossed the Mojave desert.

Our seats on the south-facing side of the plane offered fantastic views of the San Gorgonio Pass as we descended over the San Bernardino Mountains into coastal Southern California.

The marine layer hung thick over LA as we touched down. We took the shuttle bus to Enterprise, picked up our Jeep, and soon were on the 405 headed north toward Brentwood.

Patrick greeted us at his apartment building, Getty visiting scholar housing on Sunset Boulevard. After we dropped off our things, we drove up the hill to the Getty Center.

After lunch at the Getty cafe, Patrick led us behind-the-scenes through the libraries of the Getty Research Institute.

And we took in a Robert Mapplethorpe retrospective in the main photography galleries. 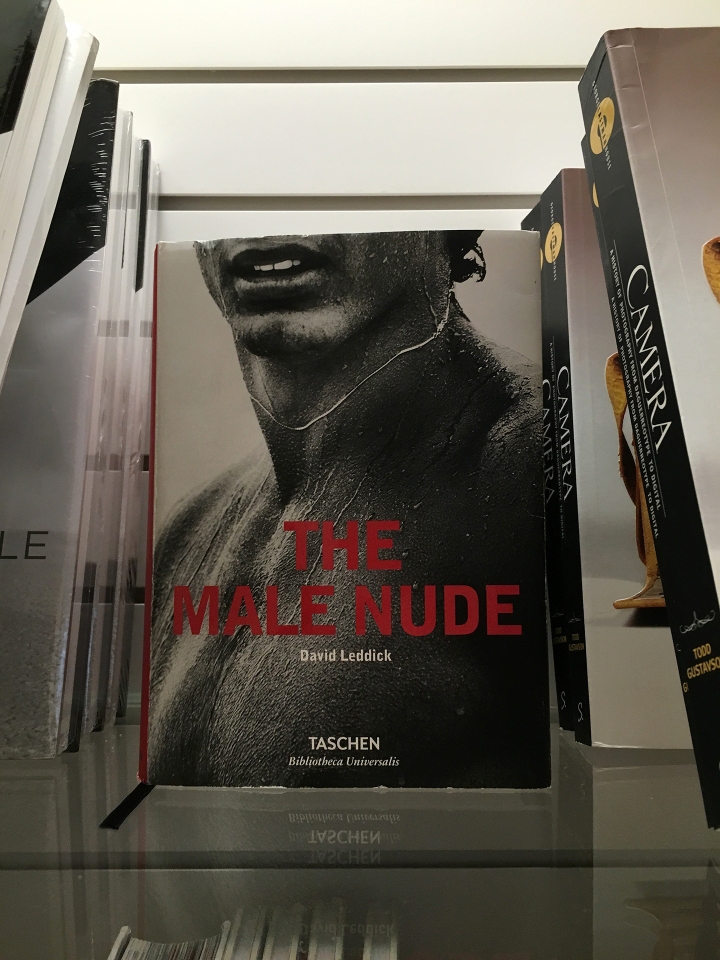 It was a great way to greet Los Angeles and listen to the most recent stories about Patrick’s time at his year-long Getty Fellowship.

That evening, we went to a great Thai place, Night Market, in West Hollywood. It was the beginning of a fun culinary tour of LA.

Next morning, while Sean caught up on sleep, I joined Patrick for his coffee run and stroll around Brentwood. Near the end, we stopped in front of a very familiar looking ranch-style home.

“Is this the Golden Girls’ house?” I asked.

Patrick said that he’d thought many times that it looked a lot like the house from The Golden Girls.

“I know they used a house in LA for the exterior establishing shots,” I replied.

So Patrick looked it up, and sure enough it was the Golden Girls’ house, right around the block from where Patrick was living.

That afternoon, we walked around the Silver Lake neighborhood and visited a farmers market after brunch at Sqirl. Patrick gave strawberries he’d gotten at the market to the staff at Aesop. The rest he used in one of a series of galettes.

Later in the afternoon, while Patrick was at a pool party for the junior scholars, Sean and I went to the REI in Santa Monica to get our camp stove fuel, dehydrated food, bars, and other necessities for Yosemite that we had not flown with. 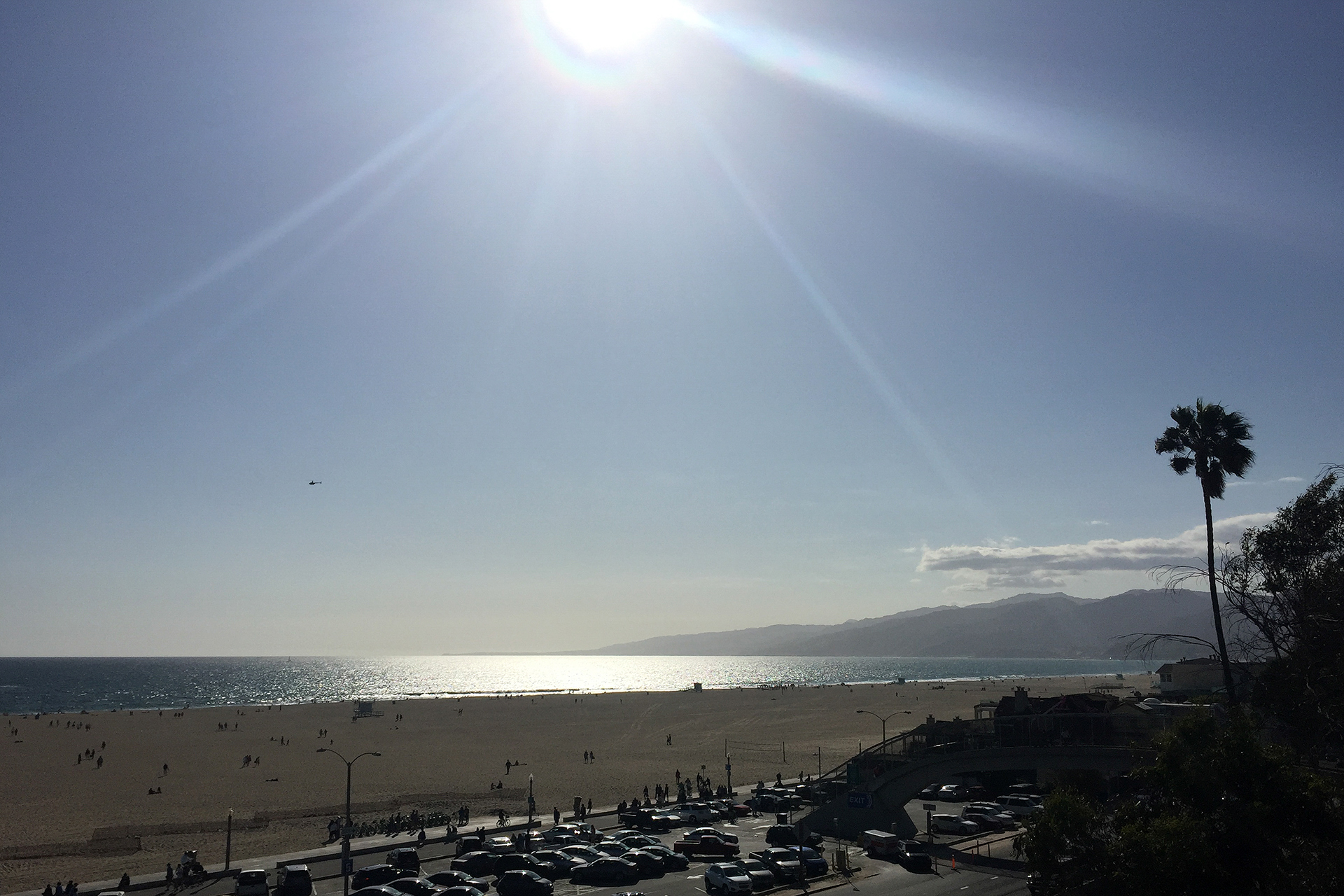 That night we cooked dinner at Patrick’s and conked out early after some cocktails and wine.

Next morning, Sean and I packed up to move on that afternoon to Phase Two of our California vacation. But before we left Patrick’s, we visited his office at the Getty Villa in Malibu. 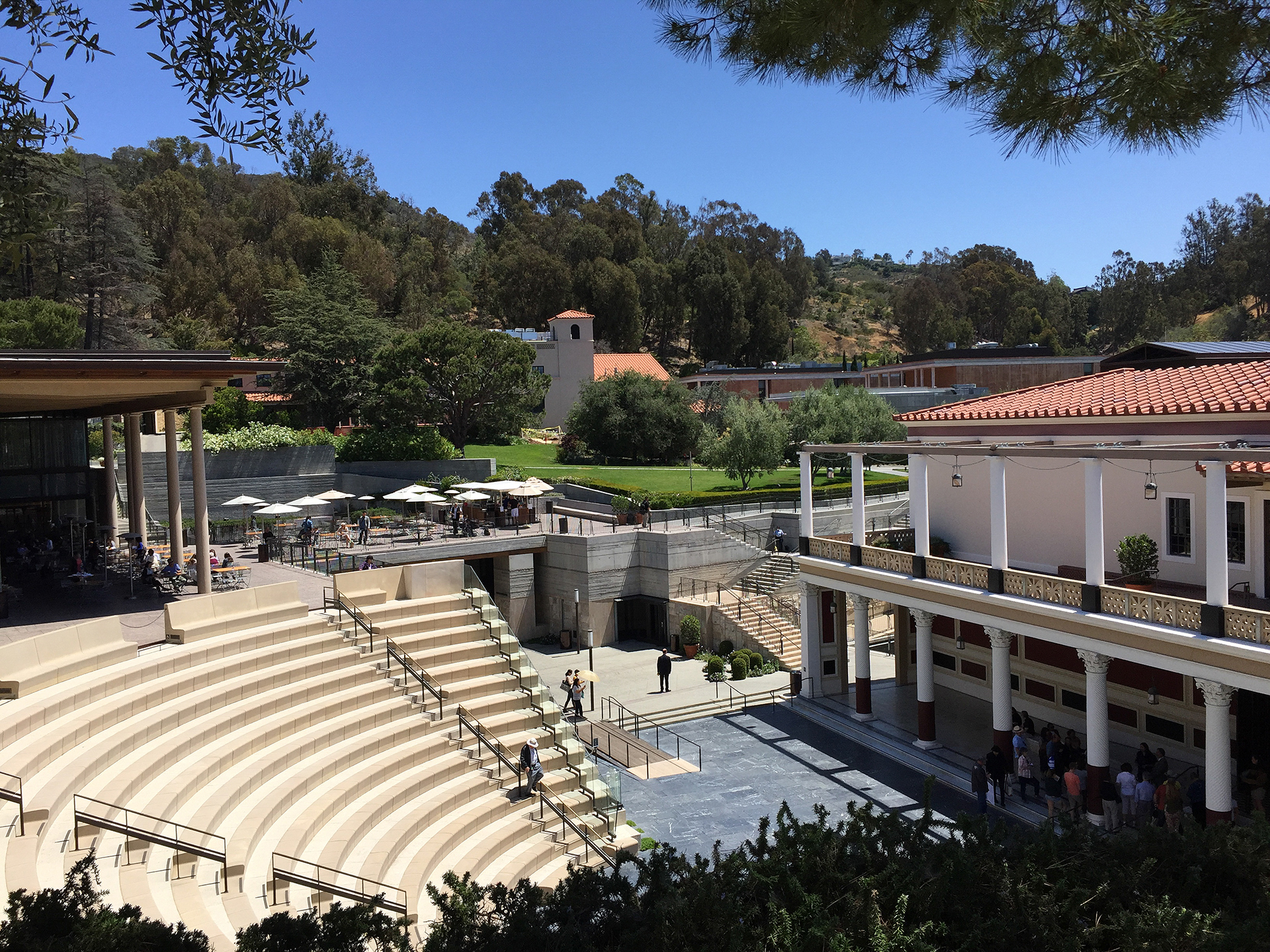 We lunched at the villa, saw a few more behind-the-scenes places, and then toured the galleries of ancient art.

After the villa, we went for a hike in the Canyon de los Leones in Topanga State Park in the Santa Monica Mountains. The entrance to the trail is down the block from the villa, and the canyon has become one of Patrick’s favorite places in southern California. It was grand for him to be able to share it with us. And I share his enthusiasm for the chaparral ecosystem. 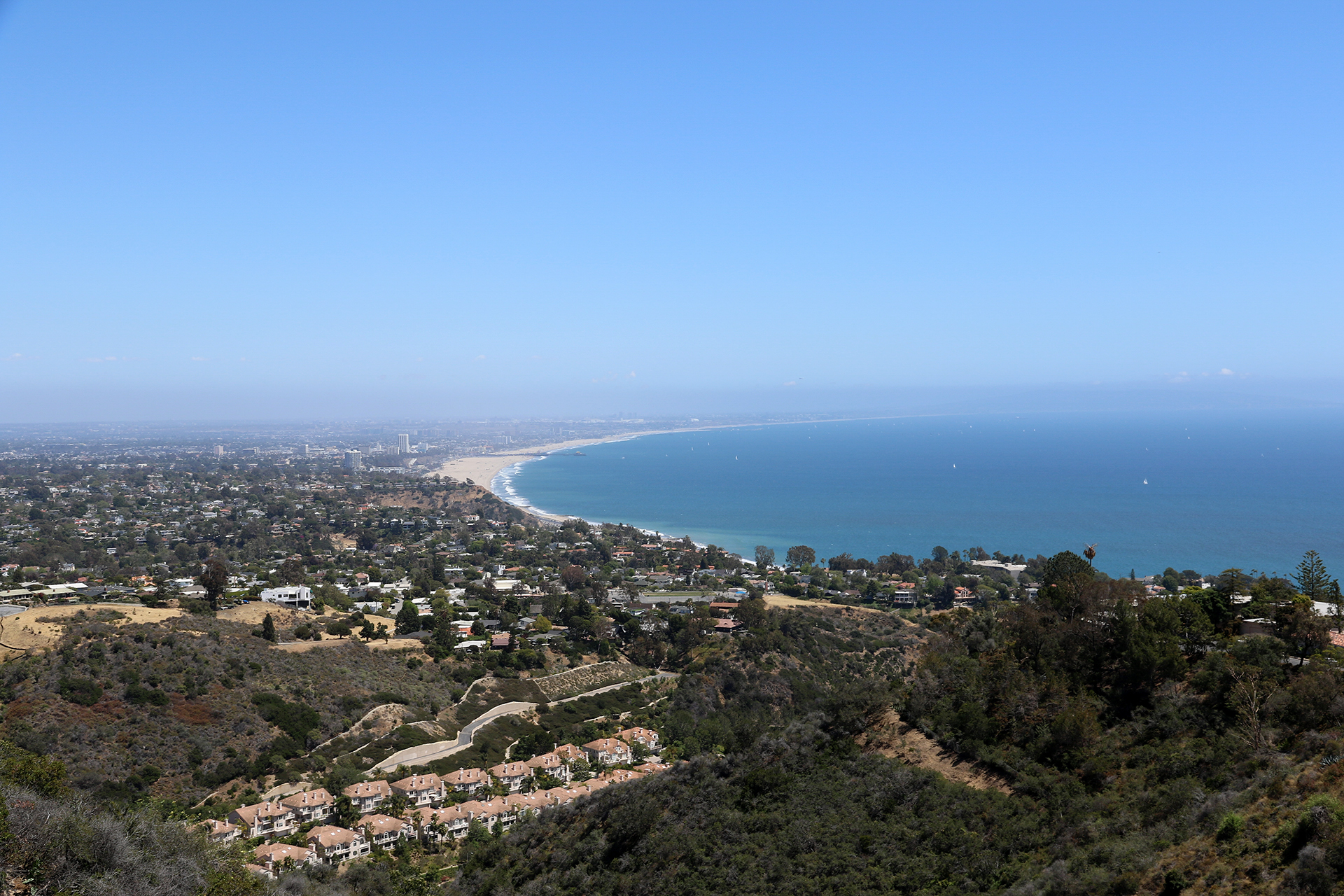 Higher up, the views of Santa Monica Bay and Los Angeles are stunning. 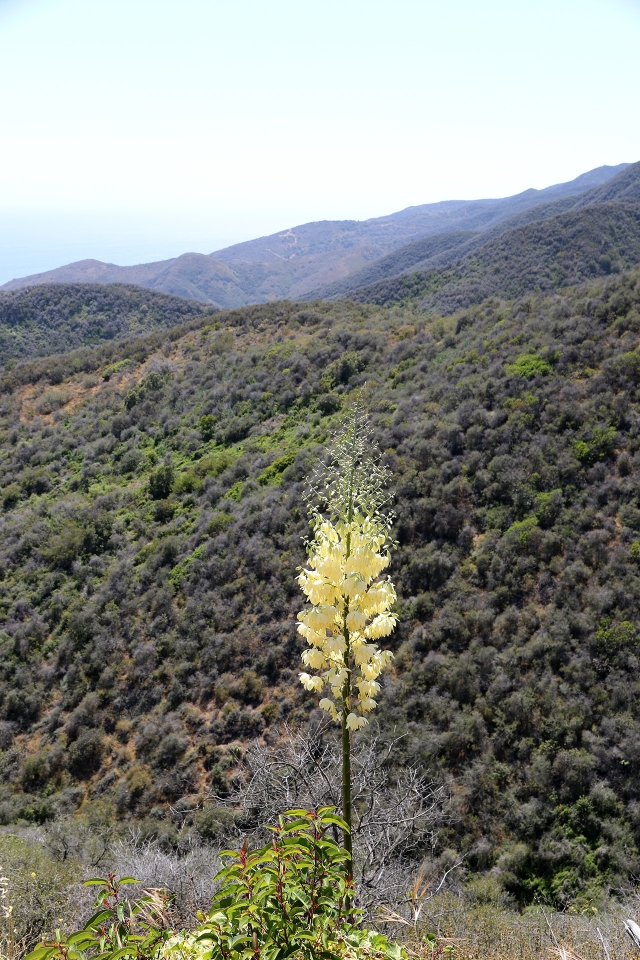 In the late afternoon, Sean and I bid farewell to Patrick (for the time being) and drove down to Anaheim where we checked into the Anabella Hotel. We spent the evening at Disney California Adventure, starting with The Little Mermaid ride. 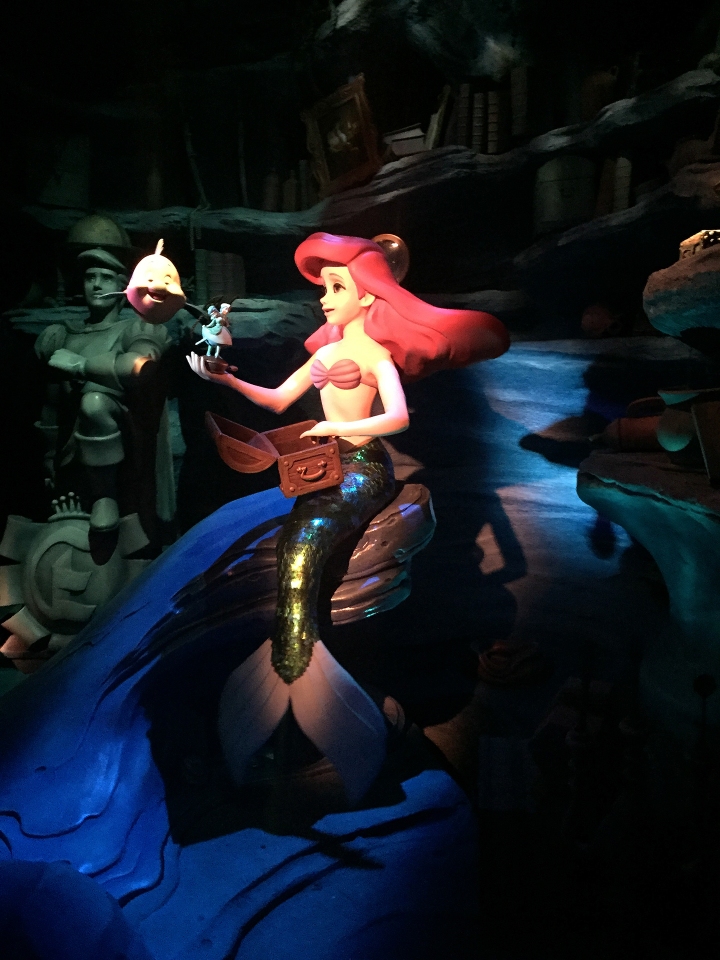 The park, which is built on the site of the original Disneyland’s parking lot, tries to reflect different aspects of California, from Hollywood to San Francisco seafront. The section dedicated to the Sierra Nevada even boasted John Muir quotes and an arrowhead motif reminiscent of the National Park Service logo. 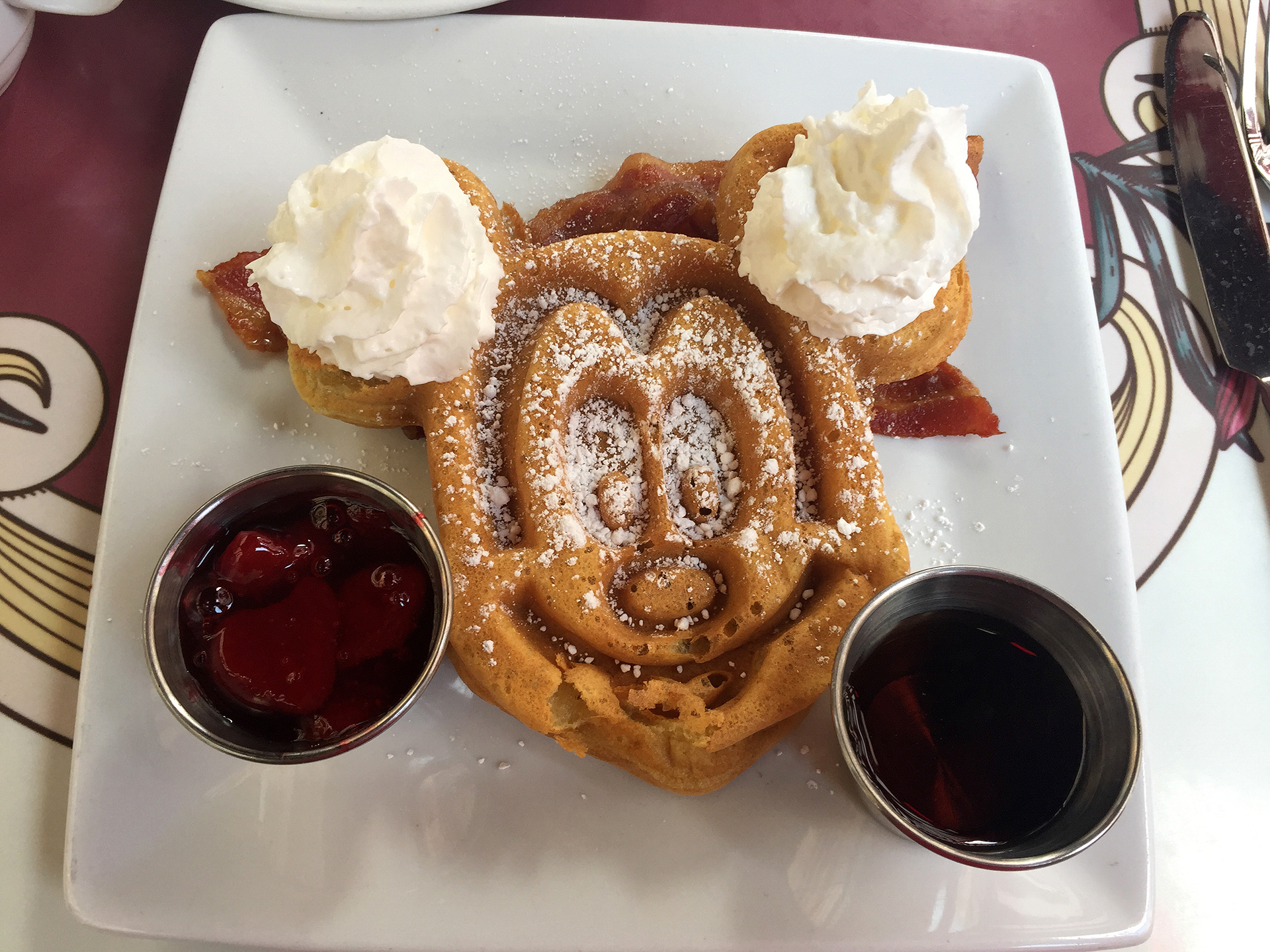 We spent the whole next day, Monday, at Disneyland. We were in line at 8:15am and left the park after midnight. Sean had never been to a Disney park before, and although I’d been to Disneyland dozens of times (my aunt, uncle, and cousins used to live thirty minutes from Anaheim), I’d not been there in this century.

A bison, recently declared the national mammal, in the topiary sculpture garden in front of It’s a Small World.

Although I was suffering from a cold (which had begun as a sore throat the day before), we thoroughly enjoyed ourselves. Even though I felt poorly, we were fueled by adrenaline and fun throughout the day.

The park was busy, but not overcrowded and the information provided by the Disneyland app and the ability to get free fastpass tickets for some of the big attractions helped with traffic flow. In fact, the traffic flow aspect was better than what I remembered from the nineties.

And it was truly Disney magical when we road the Matterhorn Bobsleds while the evening fireworks show was running. Every time the ride jolted us out of the dark interior to the outside of the mountain, we saw fireworks going off. 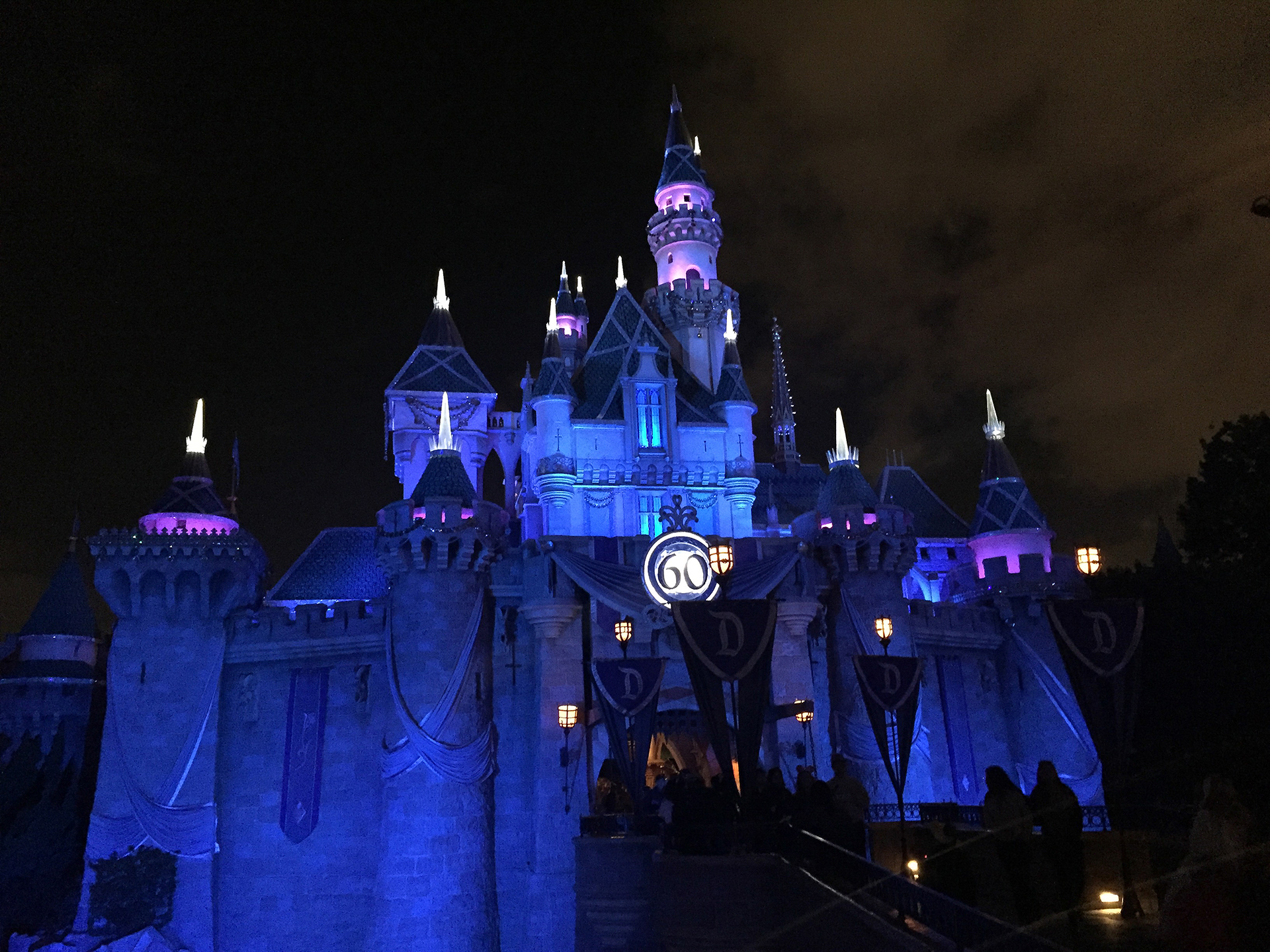 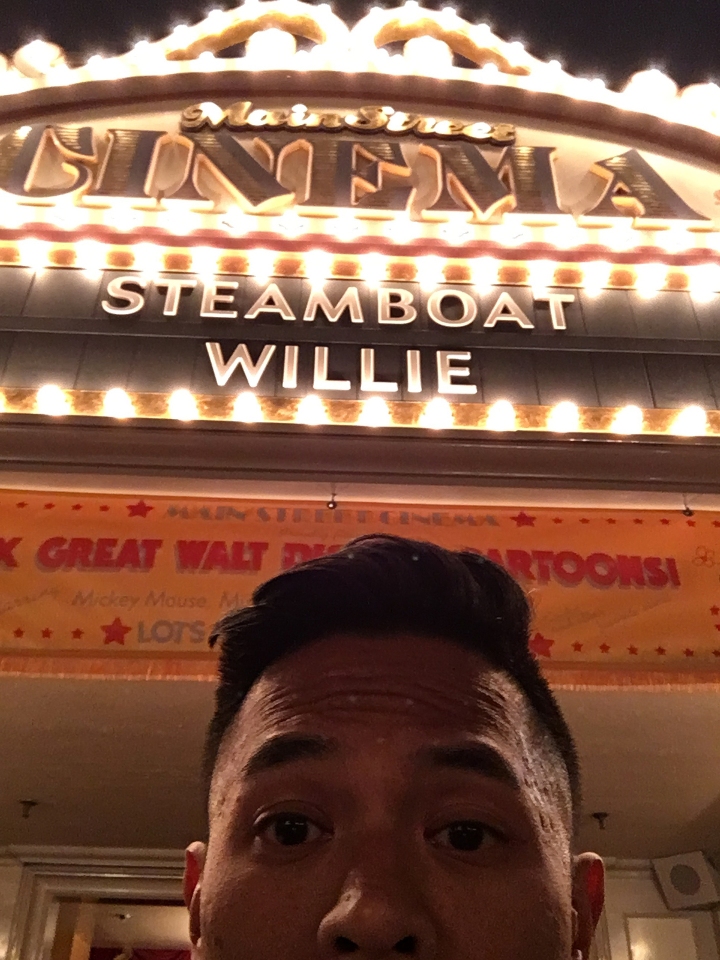 Next morning, Tuesday, May 24, it was time to make the drive to Yosemite National Park and Phase Three of our trip. We had toyed with the idea of driving up the Pacific Coast Highway to Monterrey before heading inland toward the Sierra. That journey would have been a destination unto itself, but it would have more than doubled the driving time. After spending so much time at Disneyland the day before, we decided not to do the PCH.

Instead, we slept in, had a hearty breakfast at the hotel’s surprisingly excellent restaurant, and began our five-hour drive around 11am.

We got on I-5 and skirted downtown Los Angeles and the Santa Monica Mountains before crossing the San Fernando Valley and ascending into the San Gabriel Mountains and the Sierra Pelona Mountains. Then we descended into the Tulare Basin and San Juoquin Valley sections of California’s hot, flat, drought-stricken Central Valley.

We stopped in at an REI, had lunch at an In-N-Out in Bakersfield, and got some last minute food and water supplies in Fresno before heading northeast toward the Sierra Nevada foothills. 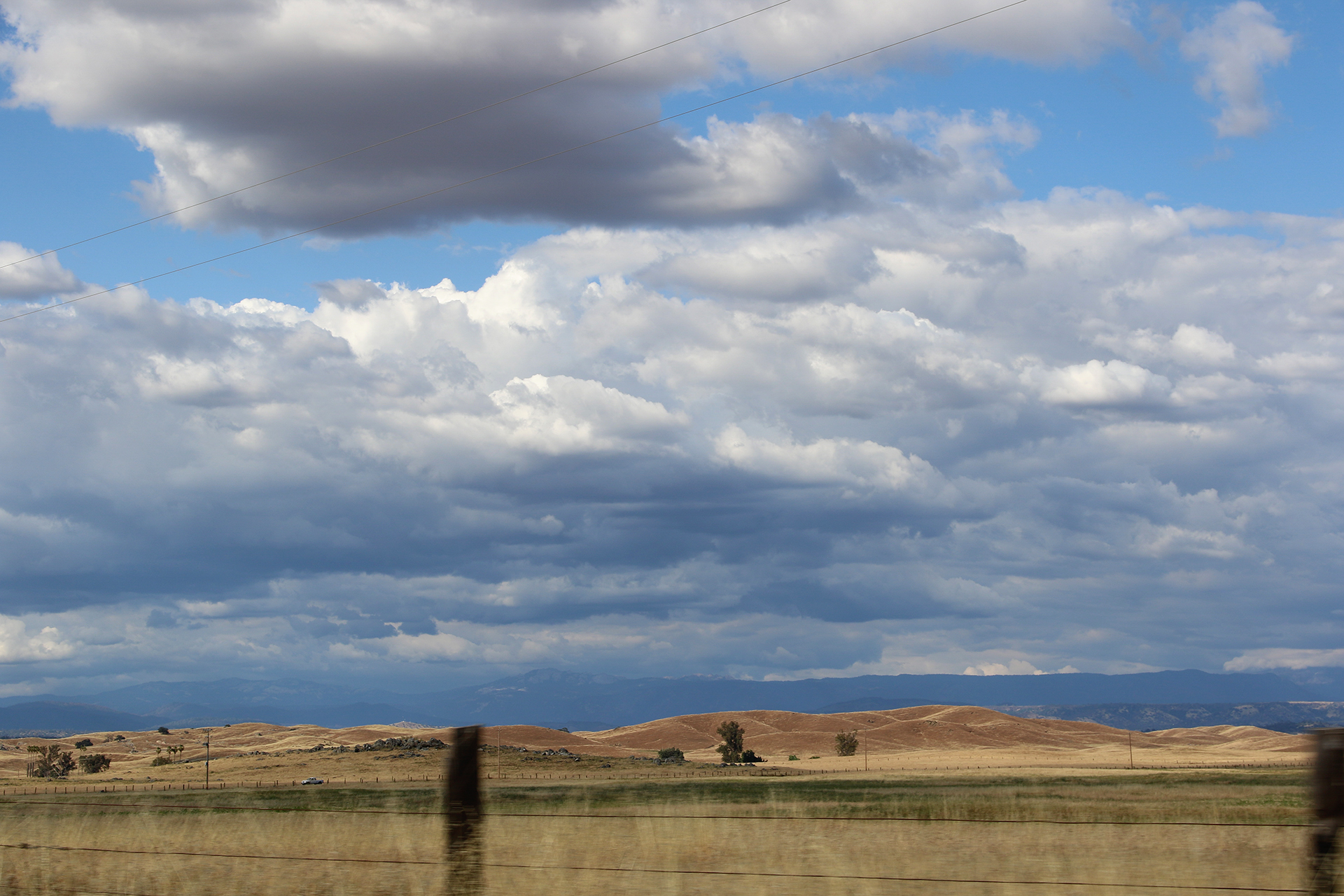 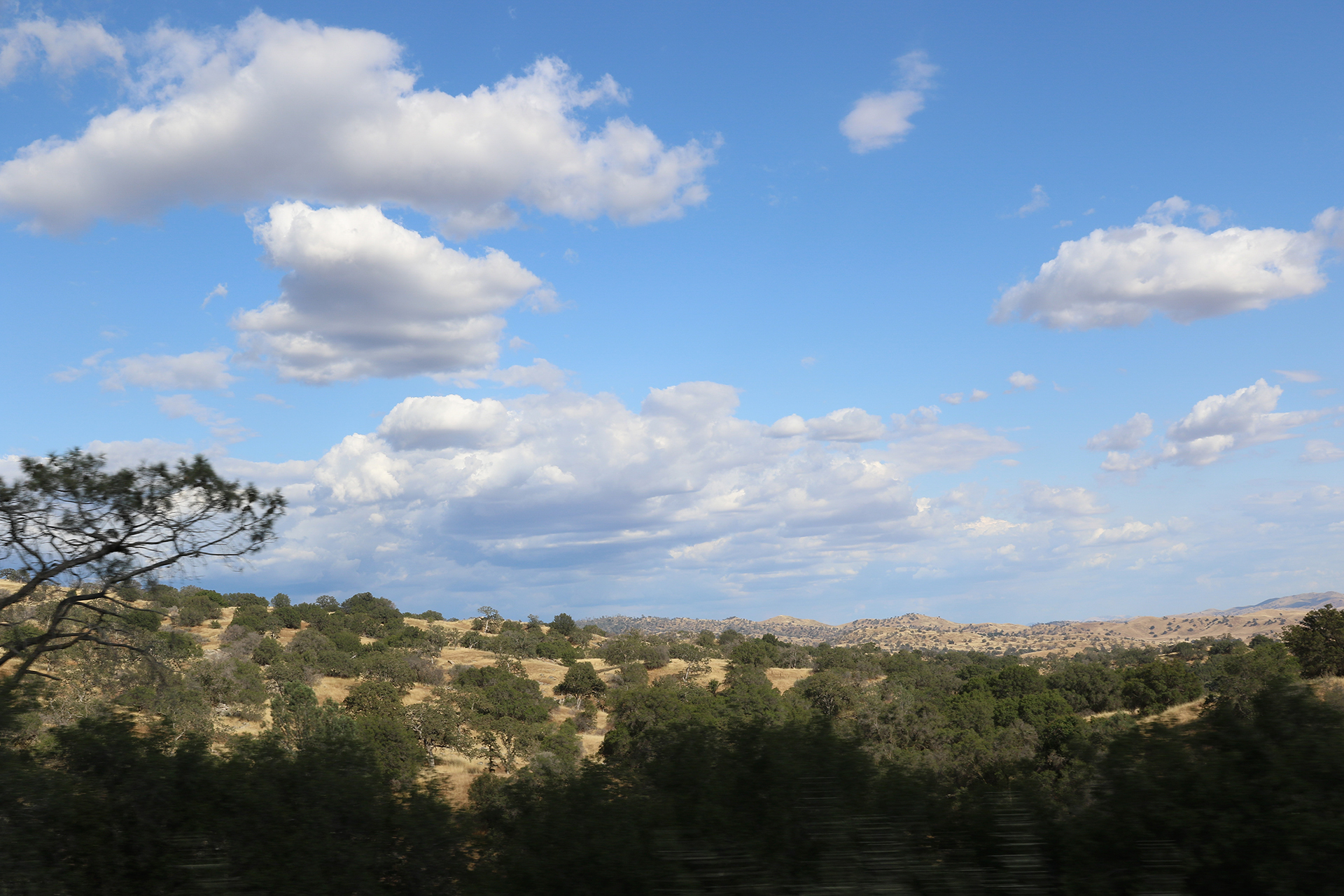 As we climbed higher in elevation, oak chaparral in turn gave way to Ponderosa Pine forest. It rained lightly off and on, but we kept the windows cracked for the fresh air and the scent of the forest. The twisting road was mesmerizing, aided by the soft wuff wuff of air when we’d pass a car going the other direction.

As someone from the Midwest, it is always striking to experience elevational transition zones rather than latitudinal transition zones. It always seems to happen so quickly when elevation is involved, versus the much slower transition from Great Plains to north woods driving from Chicago to Michigan’s Upper Peninsula, for example.

Arriving late in the afternoon on a cloudy Tuesday before Memorial Day, there was no line or traffic at the southernmost entrance to the Park near Wawona. This was the same entrance that my family had used twenty-three years earlier. Then, we’d been staying at a cabin in Wawona near the entrance. This time, we had another hour’s drive, skirting the valley, to our reserved site at Hodgdon Meadow Campground.

My cold was abating save for a slight dry cough. Sean, however, was feeling miserable as he succumbed to a version of the cold that would prove much more persistent than what had hit me.

As we approached Yosemite Valley, we stopped at an overlook for a westerly view of the Merced River Gorge. The gorge is carved by the river downstream from the broad seven miles of Yosemite Valley. The clouds and setting sun added drama to the vista and created a perfect feeling of welcome for us.

We felt that now we were in the mountains. But they were not yet in us. 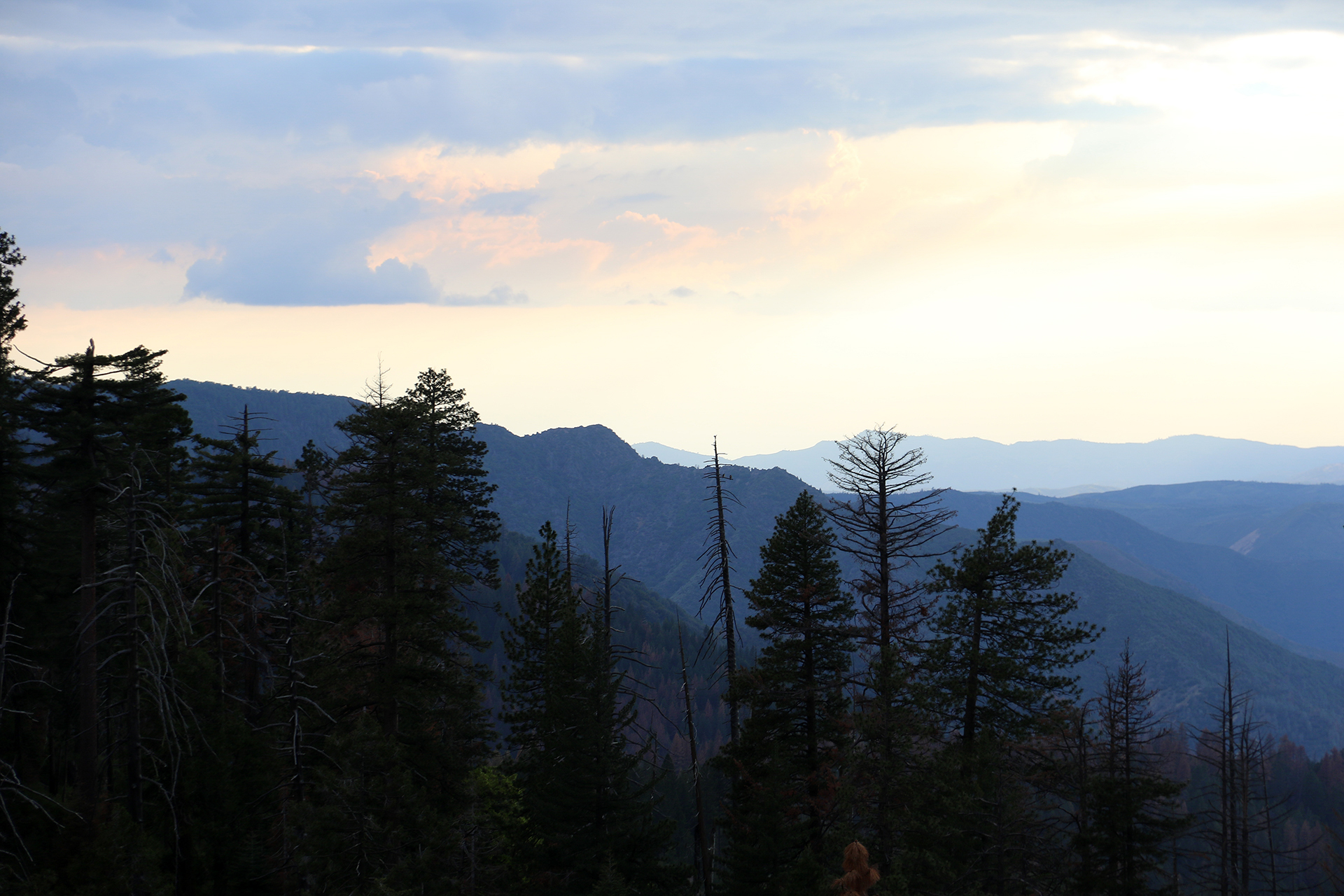 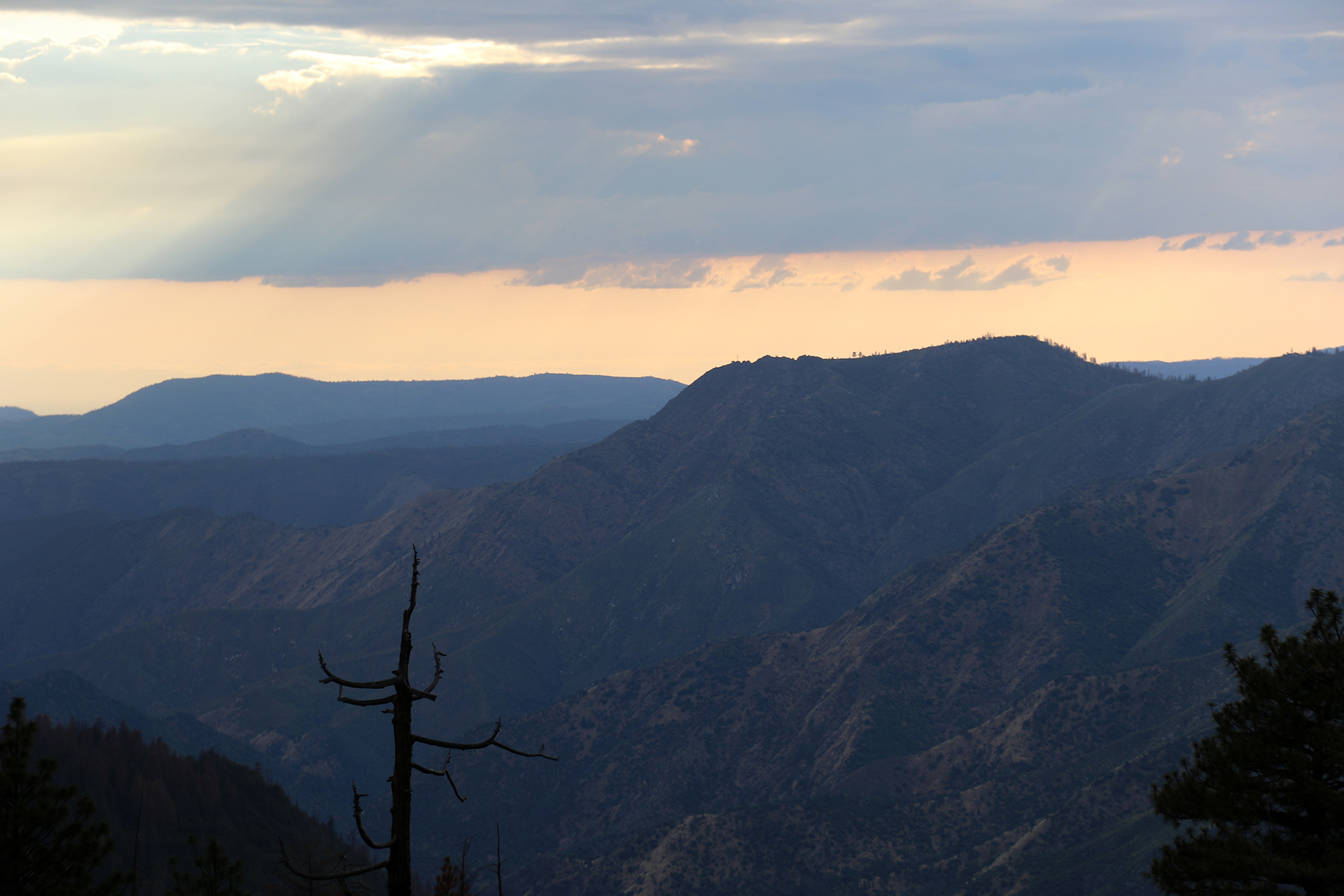 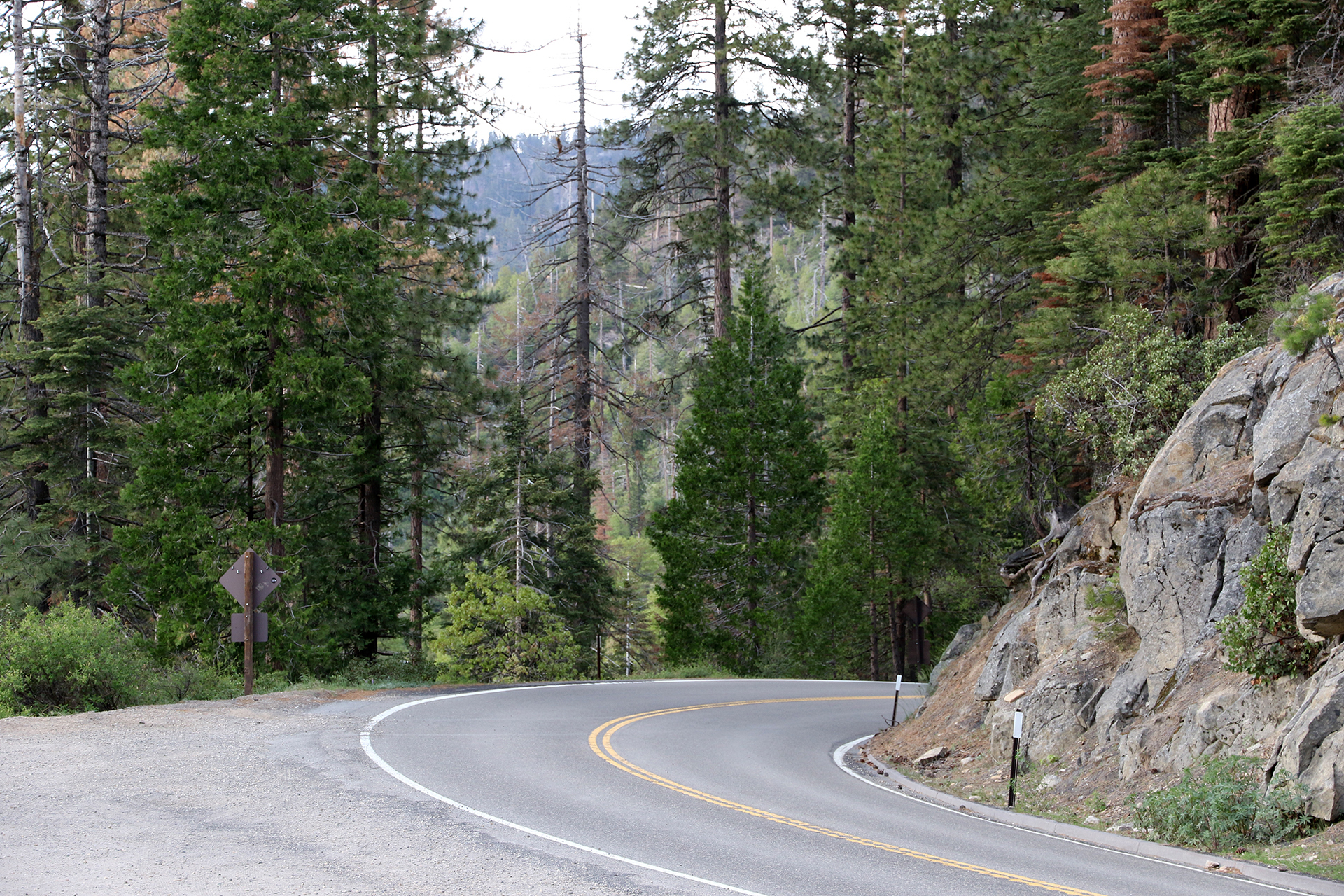 After enjoying the view of the gorge, we got back on the Wawona Road for the descent to the Valley.