On Saturday, May 28, we broke camp at Hodgdon Meadow Campground after four nights in Yosemite National Park. It was time to return to Patrick’s apartment in Los Angeles, and then on to other adventures in Channel Islands National Park the next day. Saying goodbye to Yosemite for the second time, I knew it would not be the last time. But likely our next visit will be with our kids someday.

END_OF_DOCUMENT_TOKEN_TO_BE_REPLACED

Sean and I were back in Yosemite Valley around 3:30pm on Friday, May 27. We decided to see out the afternoon by going to the Valley Visitor Center and then taking a walk. My hope when planning the trip was that we’d spend one full day in the valley, perhaps parking the Jeep at Bridalveil Fall and then walking the trails all the way as far as Mirror Lake. That and any hikes up from the valley floor, such as Yosemite Falls Trail or the Mist Trail, were victims of Sean’s lingering cold. But he had been a trooper throughout the trip, and the late May weather was glorious, so we sallied forth to see something beautiful.

END_OF_DOCUMENT_TOKEN_TO_BE_REPLACED

It was the morning of Friday, May 27, and the National Park Service had reopened the Tioga Road through the Yosemite High Sierra. The road had originally opened for the season the week before, but a storm front that had passed through over the previous weekend had forced its closure. As the week had advanced, we’d waited for it to reopen. And then on our final full day in the Park, it did.

There was no question but that we would do a scenic drive along the Tioga Road. When I had been to Yosemite as a youth in July 1993, the northern part of the Park, including the famous road, had been closed because of a manhunt for an escaped convict. And with the delay in reopening the road, I’d almost missed seeing it again. But soon we were in the Jeep and ready for one of the most famous auto routes of the National Park system.

END_OF_DOCUMENT_TOKEN_TO_BE_REPLACED

Go where you may within the bounds of California, mountains are ever in sight, charming and glorifying every landscape.

Along Big Oak Flat Road on May 26, after our day above the south rim of Yosemite Valley, we stopped to have a look at the wildflowers. The area the road passed through had burned in the late August/early September 2009 Big Meadows Fire. The fire, which began as a prescribed burn, escaped and burned 7,425 acres of mid-elevation forest west and north of Yosemite Valley.

In the seven years since the area was burned, a robust chaparral ecosystem has replaced what had been pine forest. The upshot is that this western section of Yosemite National Park, even at an elevation around 5,000 feet, feels like “California,” like the chaparral of Los Angeles or elsewhere in the state. There may be many high-elevation plant species that are the same as those found in the Rockies or the Cascades or Alaska even, but this chaparral was a reminder that Yosemite National Park is a California park and that these are the mountains of California.

END_OF_DOCUMENT_TOKEN_TO_BE_REPLACED

We completed our hike to and from Sentinel Dome at about 3:15pm on Thursday, May 26 and immediately set off on a hike to Taft Point. Like the Sentinel Dome Trail, the trail to Taft Point was only 1.1 miles one way from the parking area. Unlike the route to Sentinel Dome, however, this trail descended about 320 to Taft Point. All told, between the two hikes, we covered 4.4 miles and a vertical rise of 860 feet. Not bad, particularly with Sean still feeling under the weather.

END_OF_DOCUMENT_TOKEN_TO_BE_REPLACED

The top of Sentinel Dome is most easily reached by a 1.1-mile trail with a 460-feet vertical rise from the Taft Point/Sentinel Dome Trails parking area.

END_OF_DOCUMENT_TOKEN_TO_BE_REPLACED 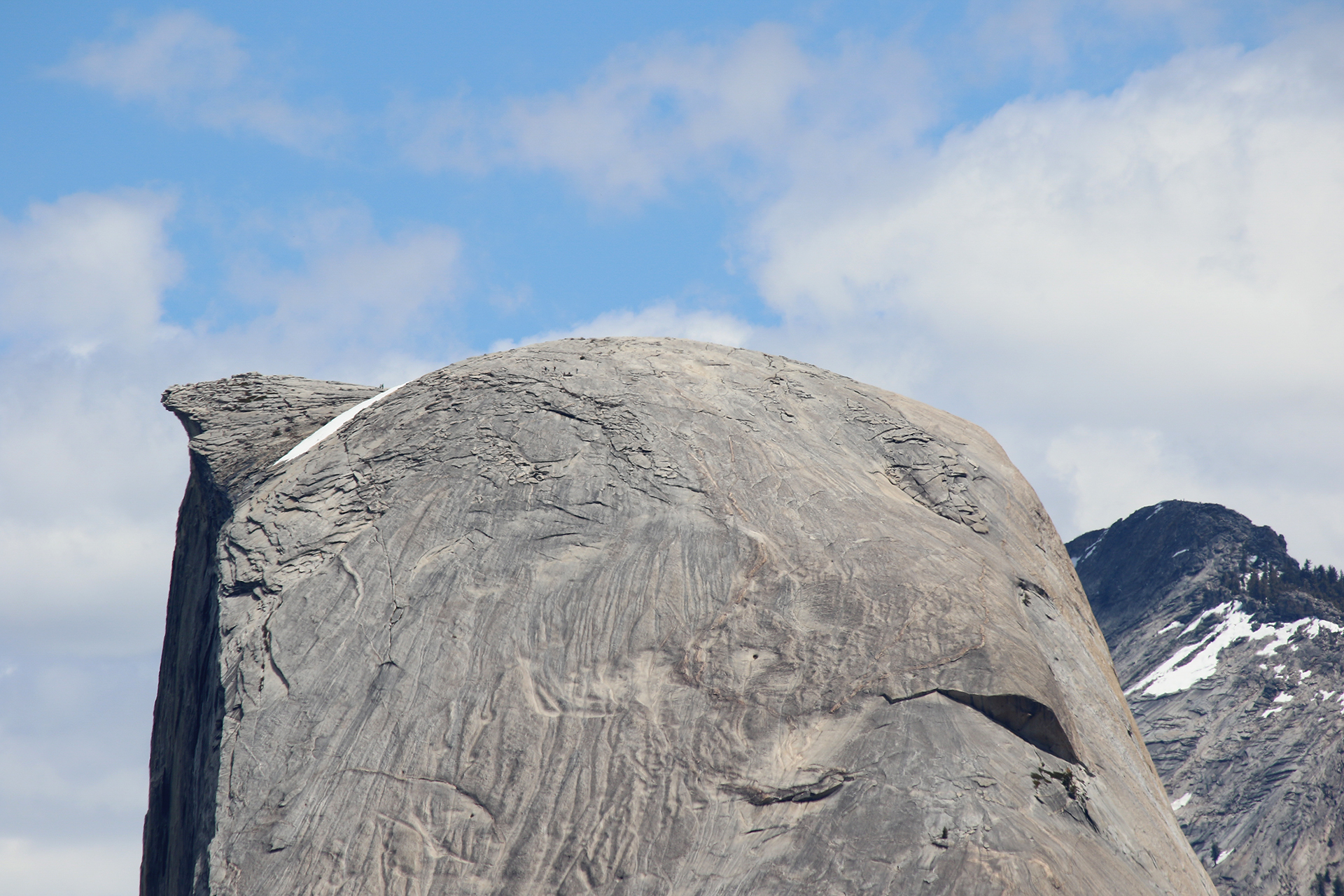 Half Dome and Clouds Rest

Thursday, May 26 dawned cool and bright in Hodgdon Meadow Campground. Sean was still fighting his cold, so we decided that instead of a long walk in Yosemite Valley, we would take the recommendation of our campground neighbors and drive up into the high country south of Yosemite Valley to one of the most famous vistas in the National Park system: Glacier Point.

END_OF_DOCUMENT_TOKEN_TO_BE_REPLACED 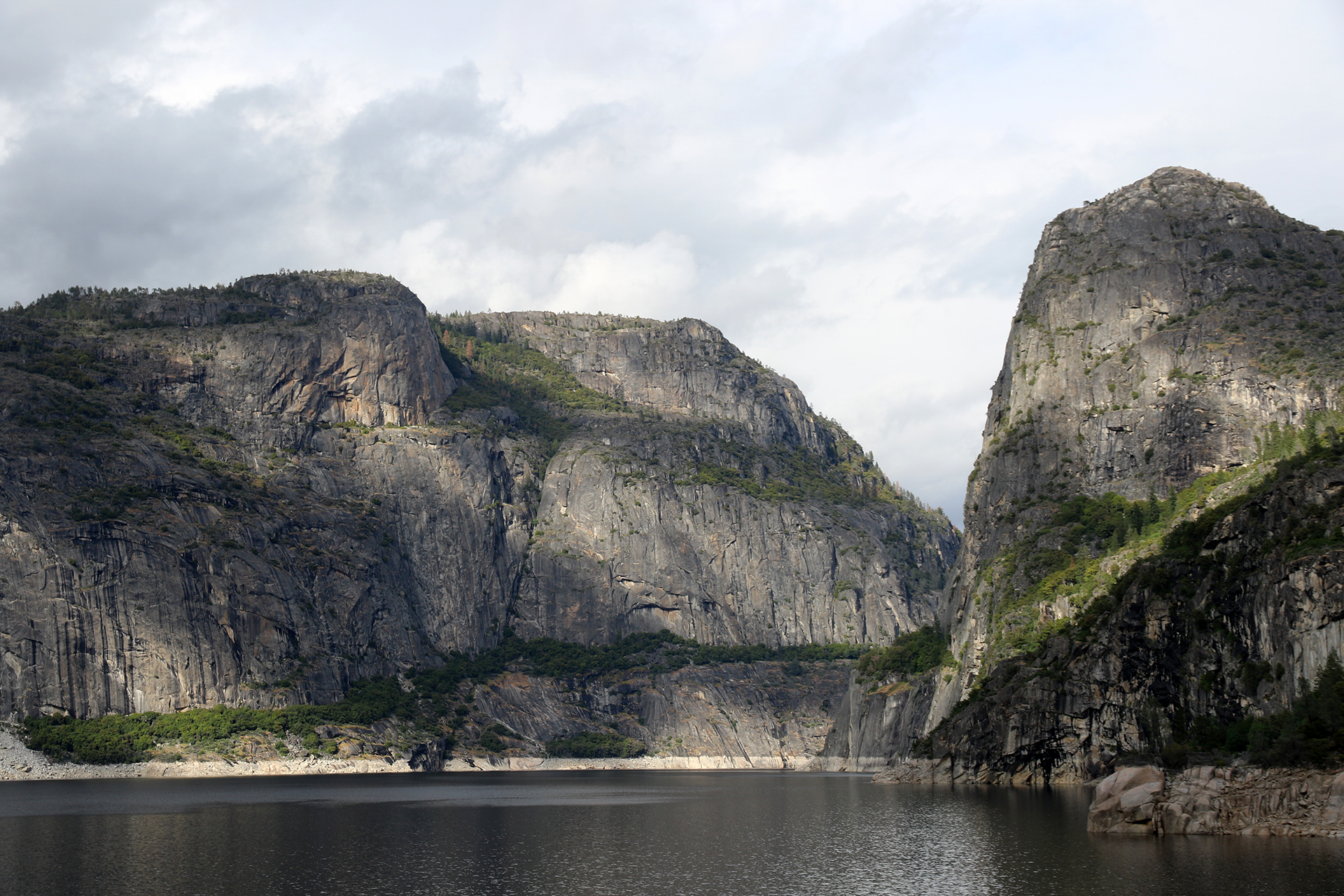 On the afternoon of Wednesday, May 25, after visiting Merced Grove, we drove Big Oak Flat Road to Yosemite Valley. Our intention was to get some lunch, check out the visitor center, and perhaps wait out the rain that was forecast. 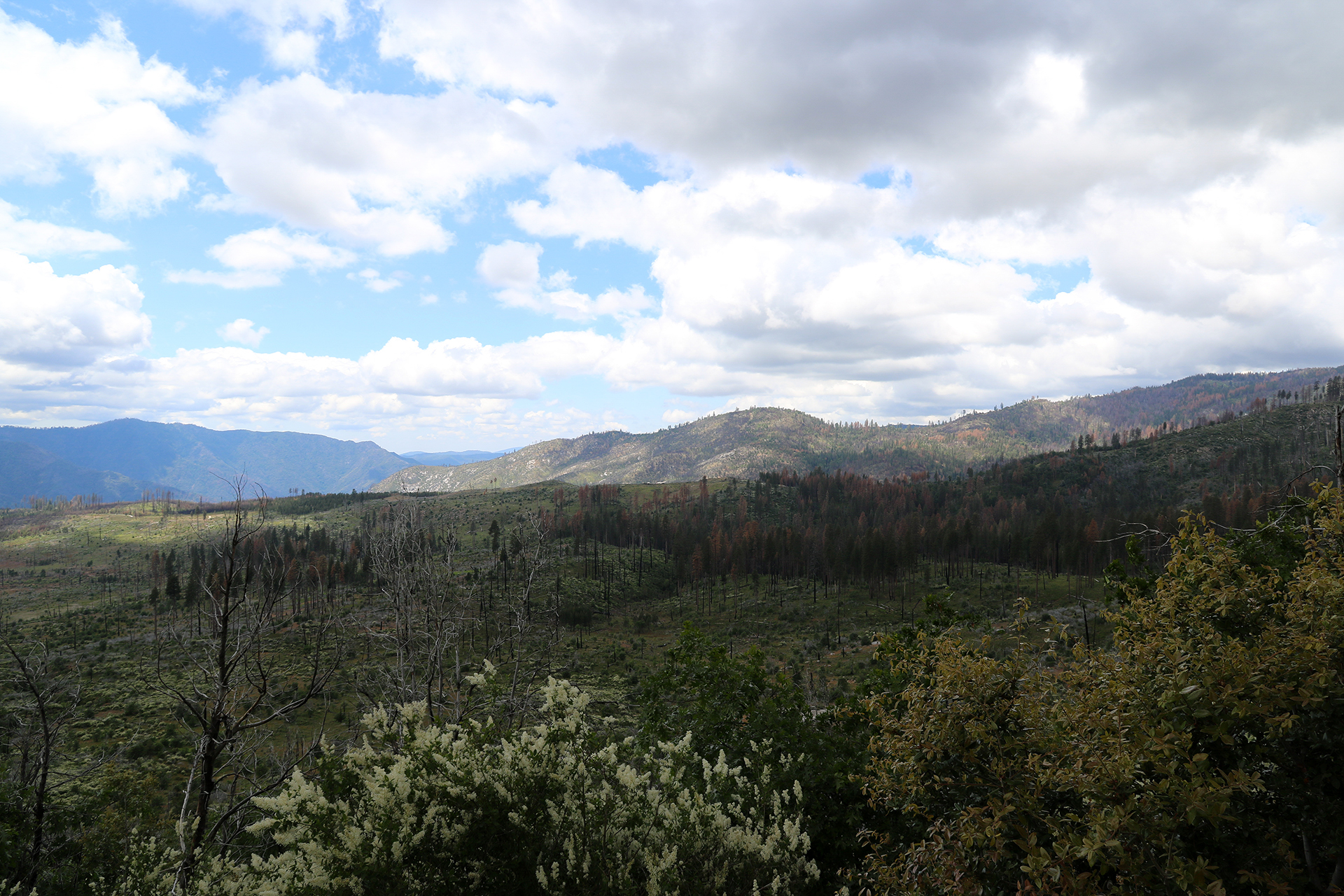 END_OF_DOCUMENT_TOKEN_TO_BE_REPLACED

After breakfast on Wednesday, May 25, we climbed into the Jeep and drove the short distance from Hodgdon Meadow Campground to the trailhead for Merced Grove. Merced Grove is the smallest of the three Giant Sequoia groves in Yosemite National Park. The largest and most famous, Mariposa Grove, was closed for restoration until 2017 so we would be making our first acquaintance of the Giant Sequoias at Merced Grove. Happily, while Merced Grove has only about twenty mature Giant Sequoias (compared to Mariposa Grove’s five hundred), it is the least visited of the three and the most likely spot to have some seclusion among the big trees.

END_OF_DOCUMENT_TOKEN_TO_BE_REPLACED

After our first encounter with Yosemite Valley on the evening of Tuesday, May 24, we needed to chase the setting sun through occasional spits of rain northwest to Hodgdon Meadow Campground, where we would pitch our tent for the next four nights. Hodgdon Meadow, located some forty-five minutes from the valley off of Big Oak Flat Road, is in the vast portion of the Park beyond the frenzied hub of activity in Yosemite itself. It is also in what became a National Park over a decade and a half before the valley.

END_OF_DOCUMENT_TOKEN_TO_BE_REPLACED

As They Are: Exploring the National Parks
Blog at WordPress.com.