Thursday, September 3 was sunny at Glacier Bay National Park. It was the second sunny day in a row after some six weeks of clouds and drizzle, according to the staff at the lodge.

Back in early July, while we had been planning this portion of the trip while sitting on a veranda in southern Wisconsin, I’d turned to Sean and asked which of our two full days at Glacier Bay did he want to do a half-day paddle and which did he want to do our full-day boat tour. He’d replied that we should do the paddle the morning of our first full day. Now that we were actually here, his instinct could not have served us better. The forecast was for it to be sunny and warm on Thursday, and the drizzle was supposed to return on Friday.

It was sheer luck, but we’d be paddling Bartlett Cove’s waters while they were completely calm and shimmering in the sunshine.

We woke fairly early and confirmed the beautiful, sunshiny day. After we had breakfast at the lodge dining room, we gathered our few things and hung out near the fireplace where we were to meet our guide at 9am. 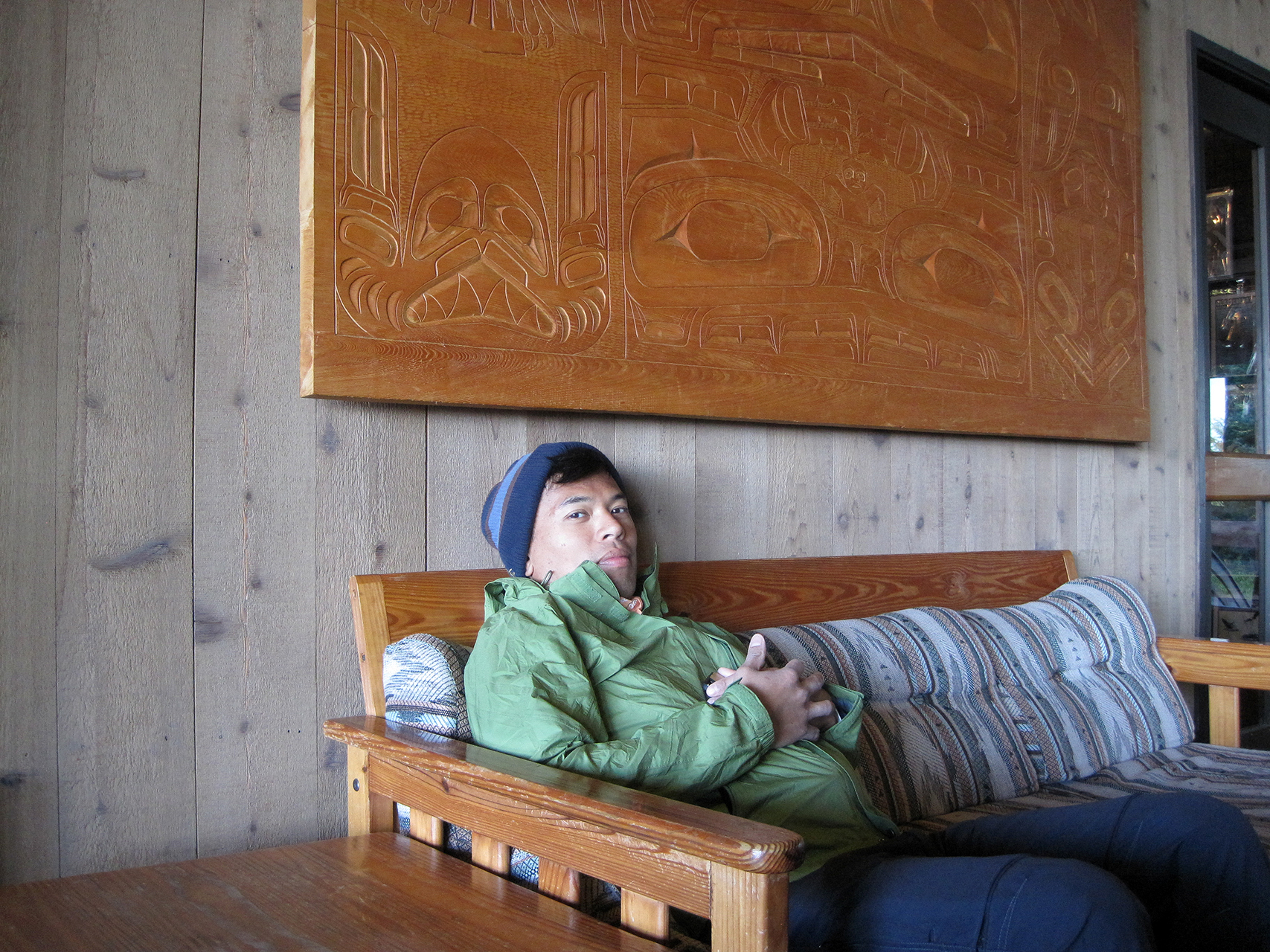 Our guide from Glacier Bay Sea Kayaks was Brittney Cannamore. When she arrived, she gathered our group so that we could make our final payments and sign our waivers. There were only two others joining the tour that morning, a young woman who had spent the summer working at the Gustavus Inn and her mother. They would soon be returning home to suburban Atlanta. 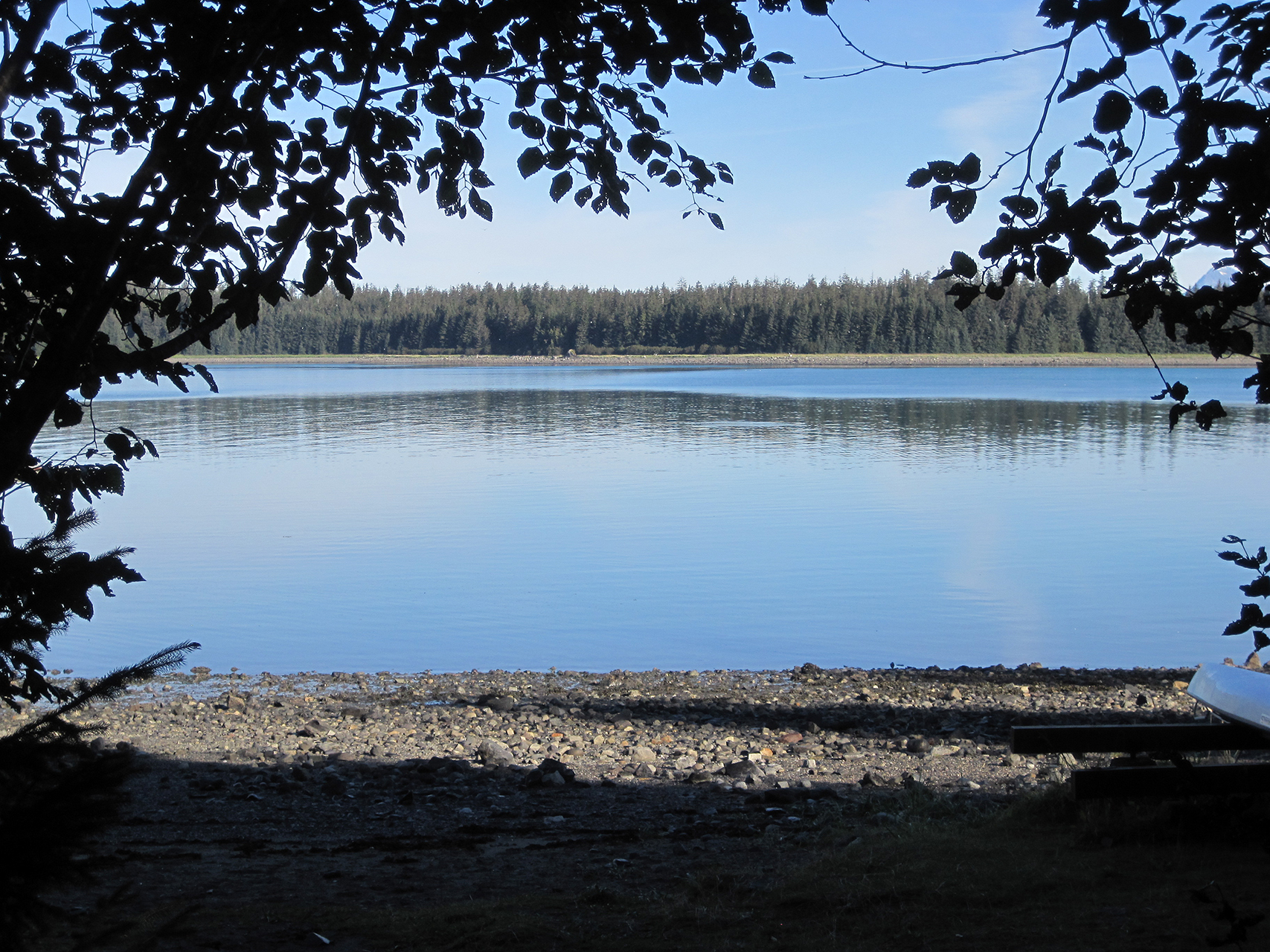 After asking us a few questions about our experience level (both Sean and I had kayaked before, but only Sean had handled a sea kayak), Brittney led the four of us down to the shore of Bartlett Cove. 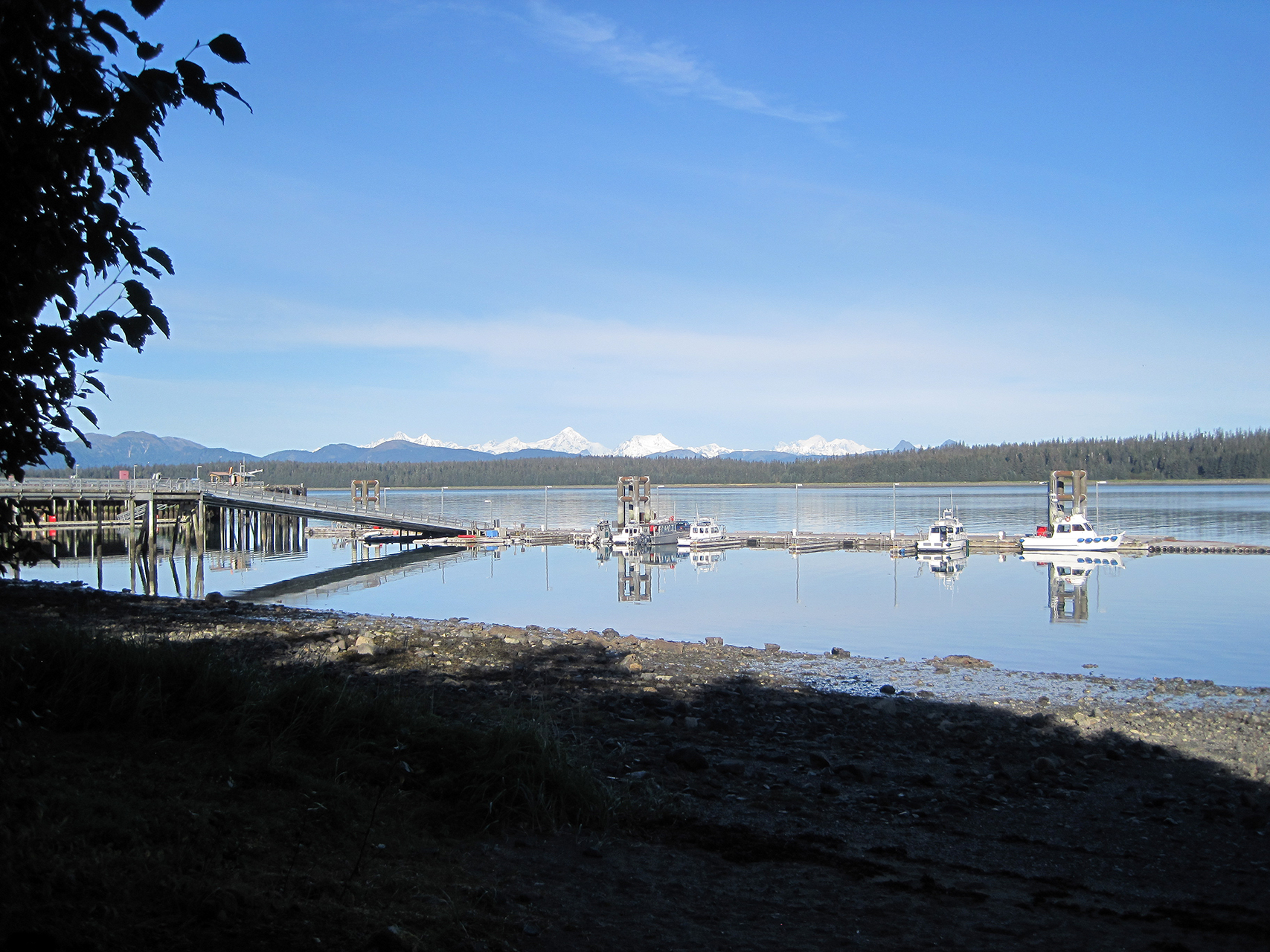 We put on rubber boots, spray skirts, and lifejackets and locked what we weren’t carrying into a supply shed.

After we were all geared up, we hauled the three kayaks (two doubles and a single) down to the water’s edge. Sean and I went first. I got into the steering (back) position and Sean climbed into the front position while Brittney pushed us into the water. 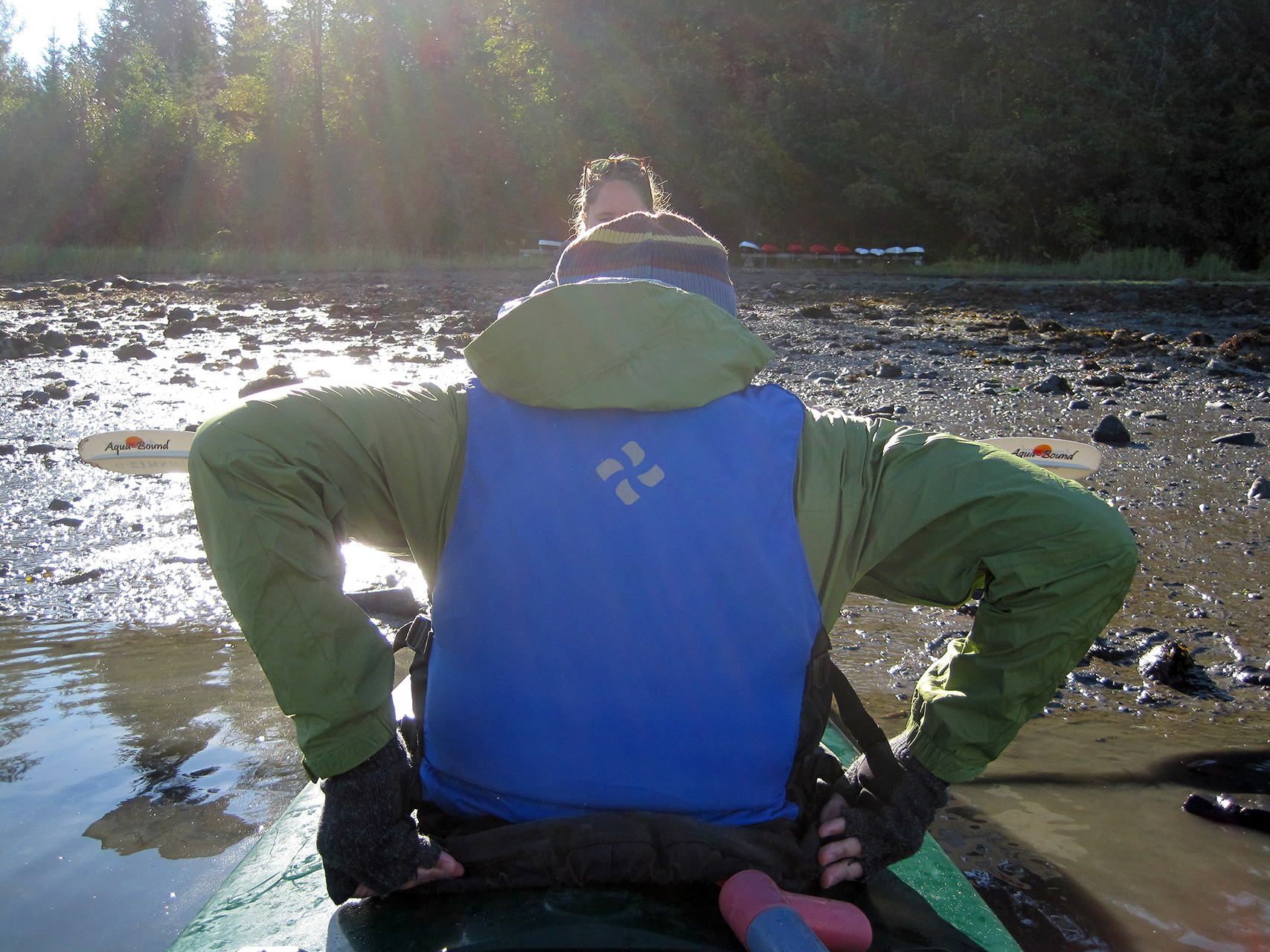 We adjusted and secured our spray skirts, and I practiced steering with the foot-controlled mechanism that turned the kayak’s rear rudder while we waited for the others to join us.

Even just making some gentle circles in the absolutely still waters near the docks was magical. 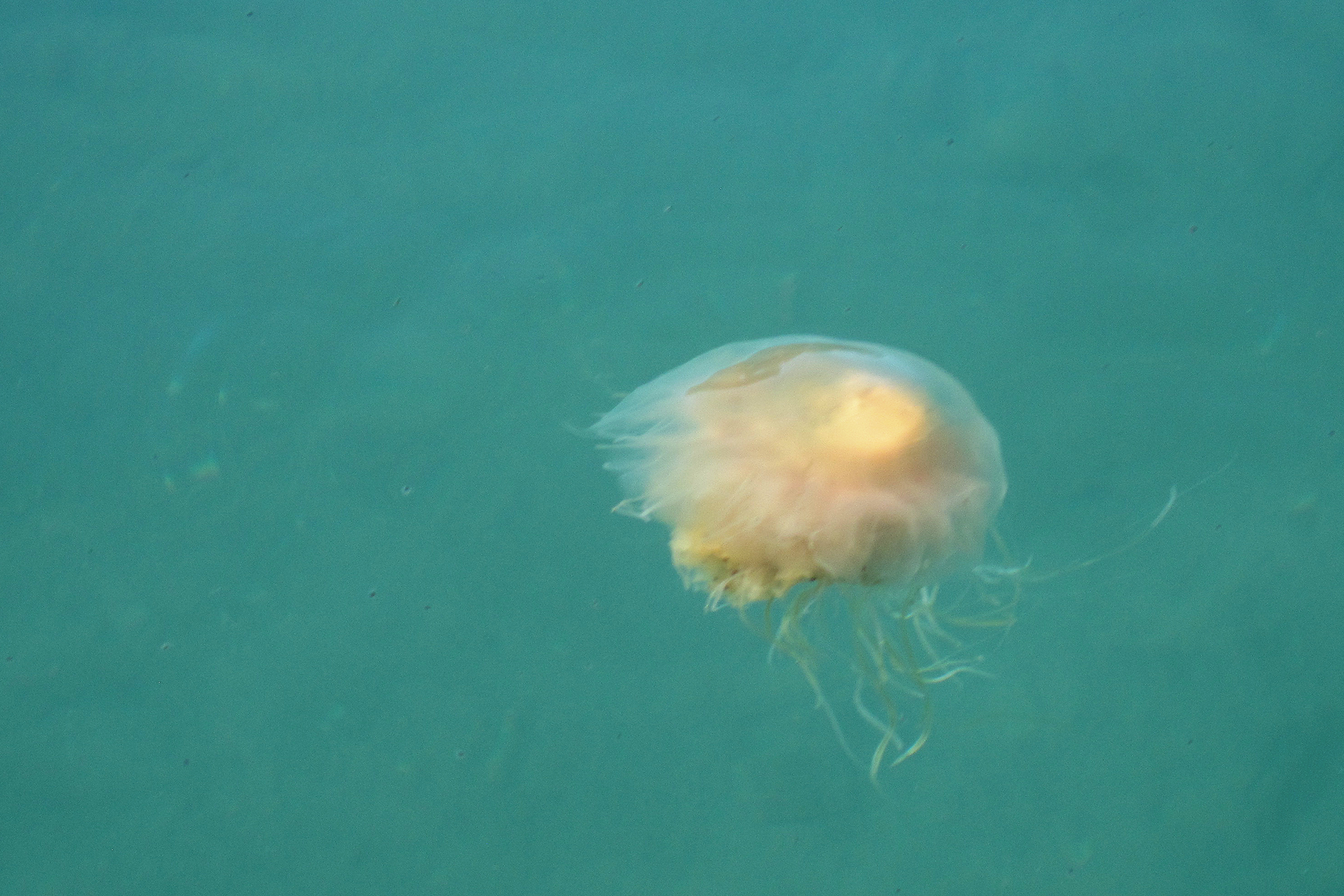 Once everyone was in the water, we cleared the docks and set out across Bartlett Cove toward Lester Island opposite. 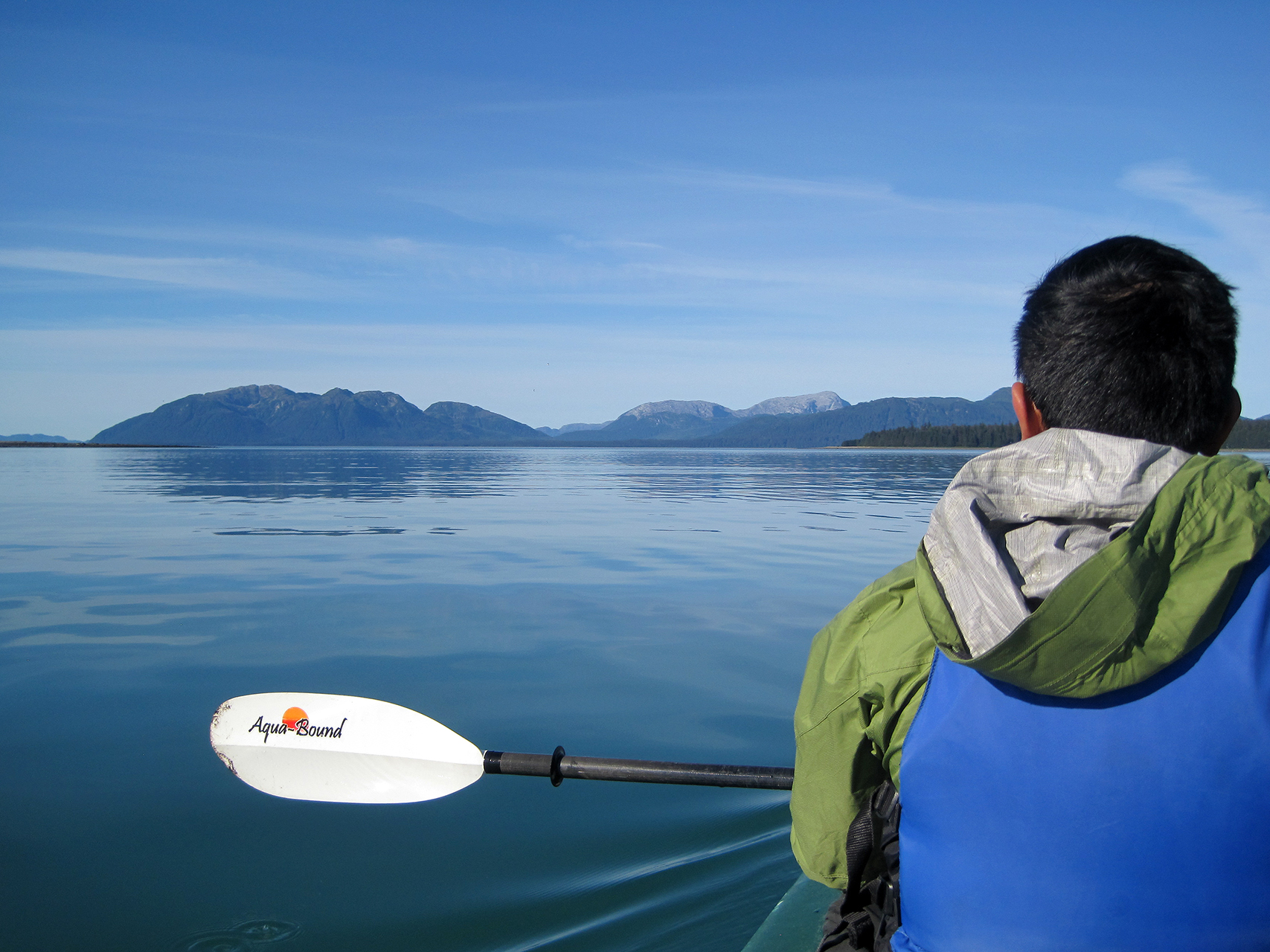 To our left, westward beyond Lester Island, the southernmost part of Glacier Bay opened. 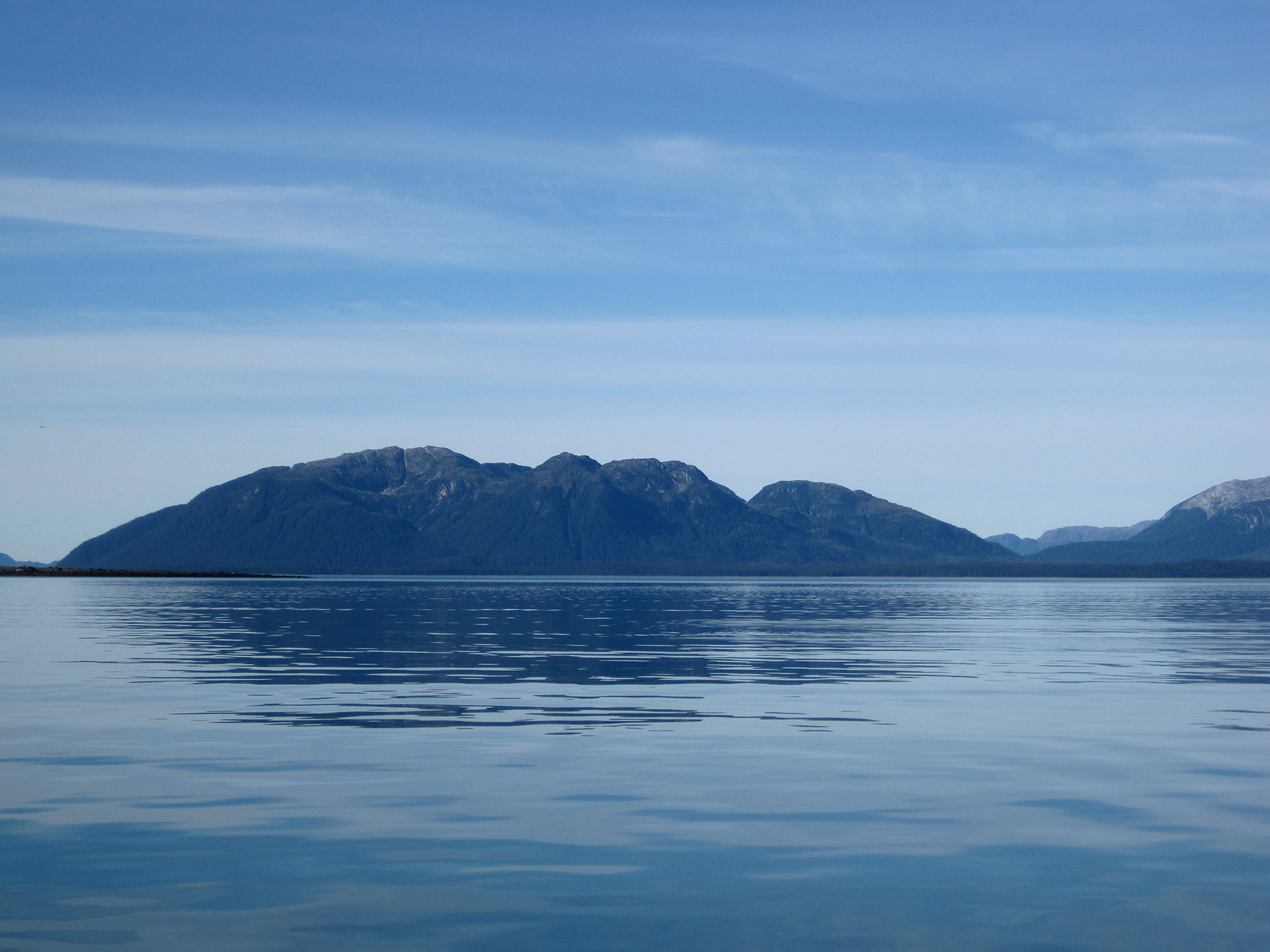 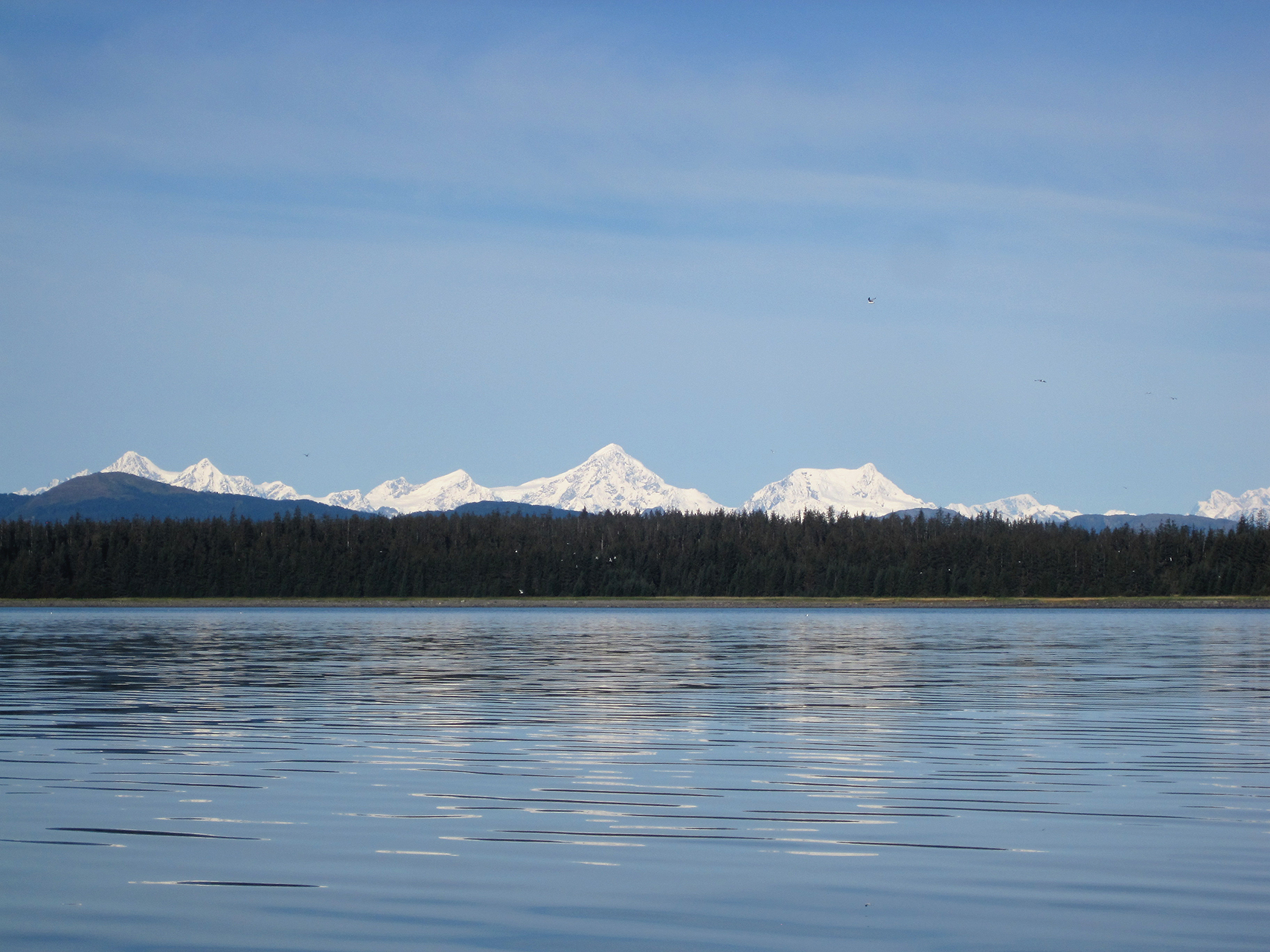 To our left, Point Gustavus marked the end of the mainland where Glacier Bay spilled into Icy Strait, and then to the Gulf of Alaska.

We spotted a Sea Otter to our right off the shore of Lester Island. From water level, it’s easier to get perspective on how large they are (up to five feet long).

The water was so calm and the day so lovely that it was difficult to imagine how treacherous Sitakaday Narrows (the southern portion of Glacier Bay) or Icy Strait could be.

We aimed for the tip of Lester Island so that we could have a good look into Glacier Bay. We were near where the snout of Grand Pacific Glacier, which carved Glacier Bay, was in 1794. 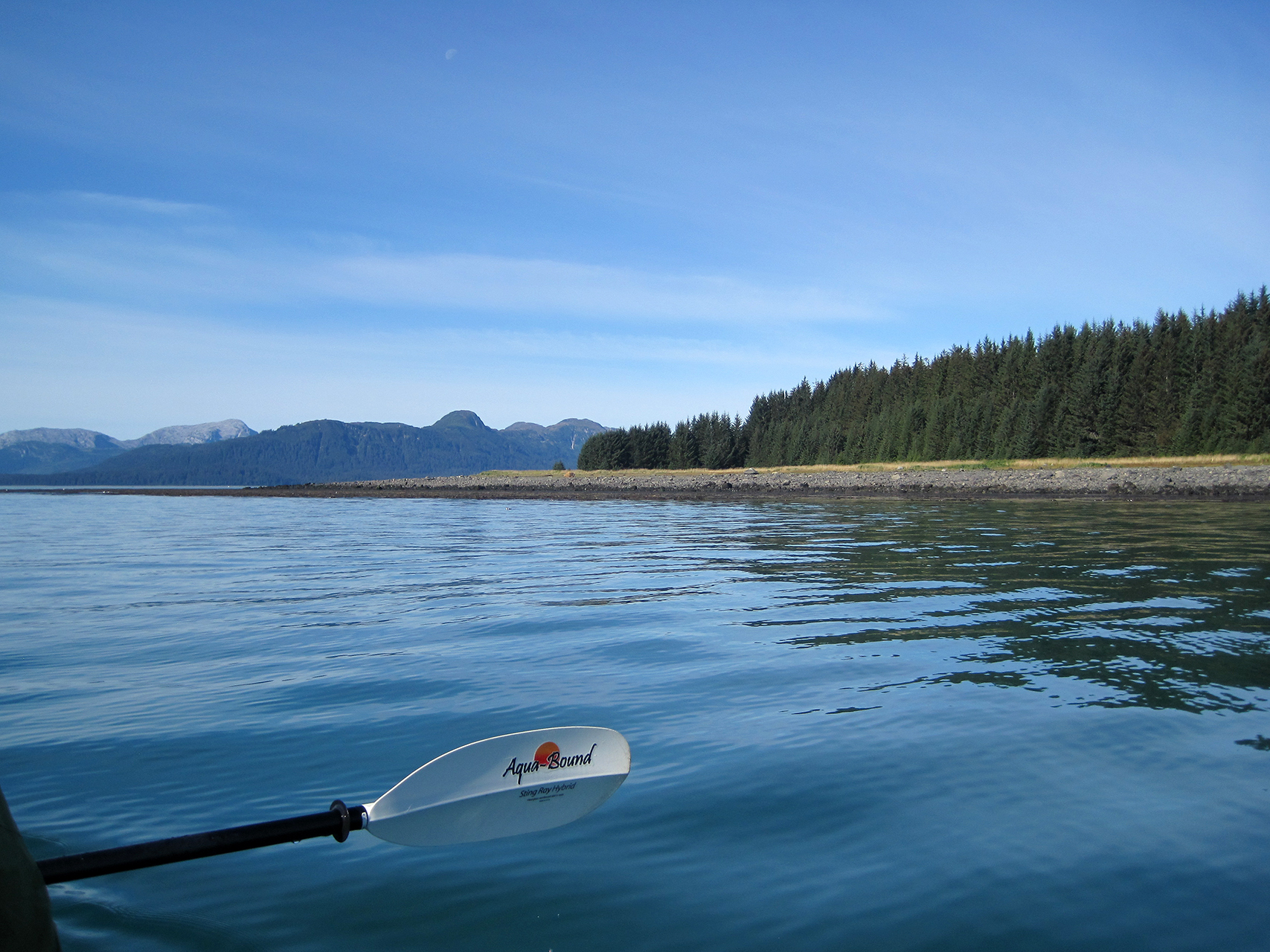 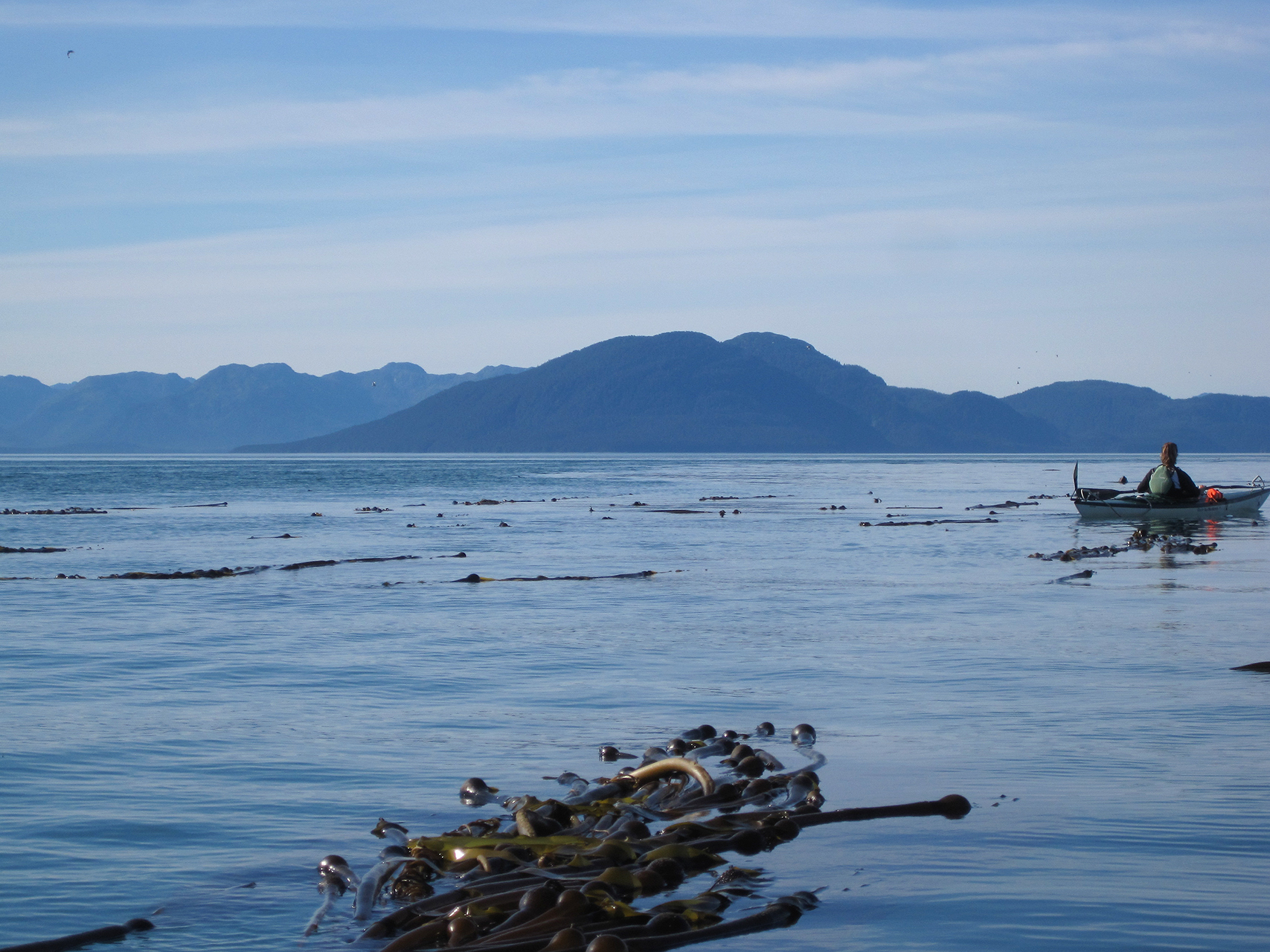 The waters off the southwestern end of Lester Island hold a large Kelp forest. As we approached, two Sea Lions poked their heads out of the water and watched us for a moment before vanishing.

Near the Kelp beds, there were hundreds of tiny black specks in the water. Brittney informed us that they were immature snails that had not yet formed their shells. We were astounded by the sheer number of them.

We took a break off the tip of Lester Island and had a snack, provided by Brittney, of some granola protein bars. All five of us marveled at the glorious weather.

Brittney had grown up in Anchorage before moving to Gustavus. Her husband, David, also worked for Glacier Bay Sea Kayaks. This was Thursday, and they’d be taking a group out together on Saturday, which would end the season for them. In the winter, she worked taking care of a research facility in British Columbia.  She wanted to know, since we were nearing the end of our trip, what we thought of Alaska. Sean said that it had exceeded his expectations on every level: the scenery, the wildlife, the people, and the food.

We talked about Chicago and about how different, but the same, it was. Brittney said that she and her husband like to hang out and watch Netflix with their cat. We said that we like to do the same thing. We just have a city of 2.7 million around us when we do it. 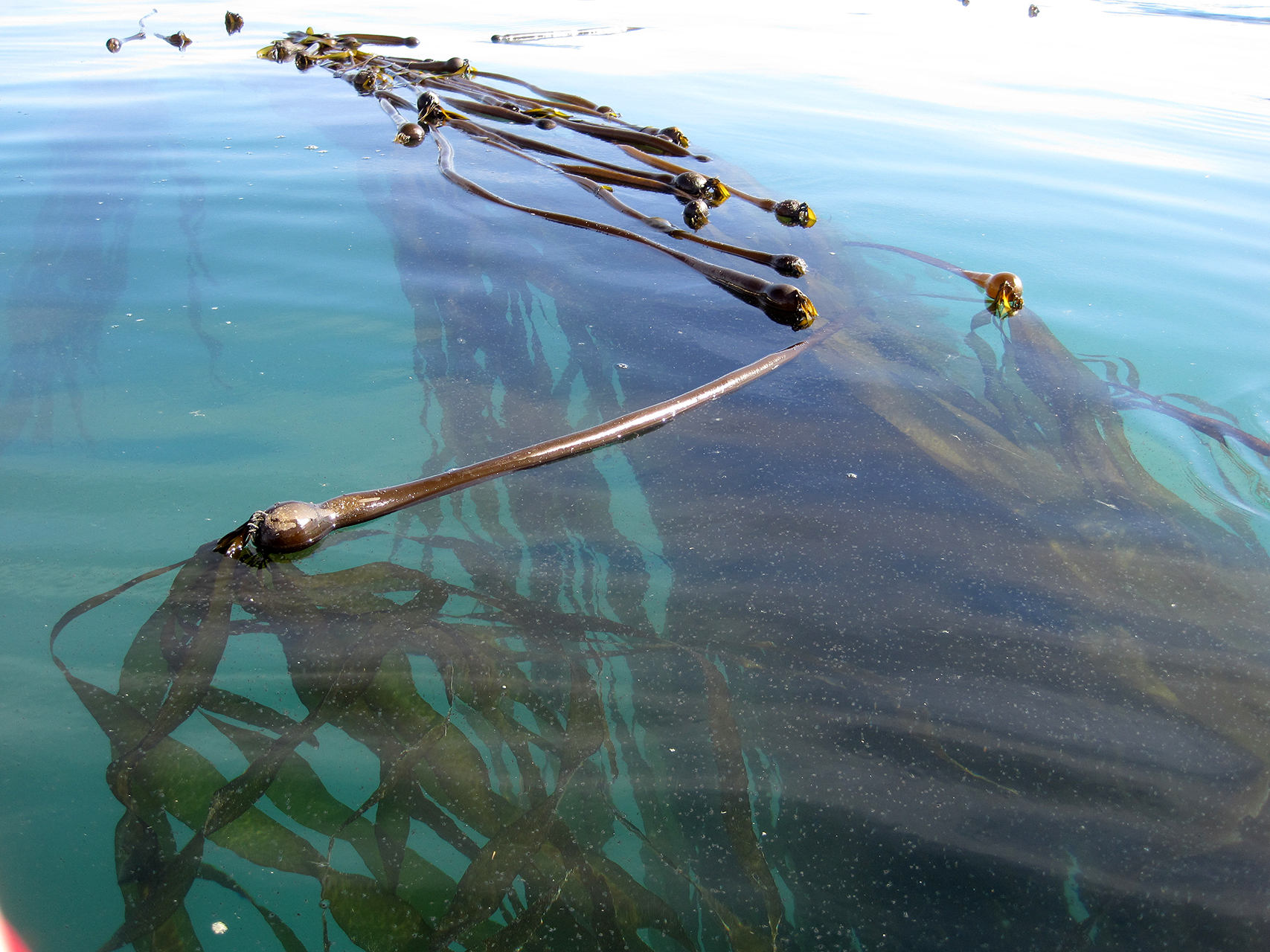 After our rest and snack, Brittney led us out around the end of Lester Island for a glimpse up the bay. 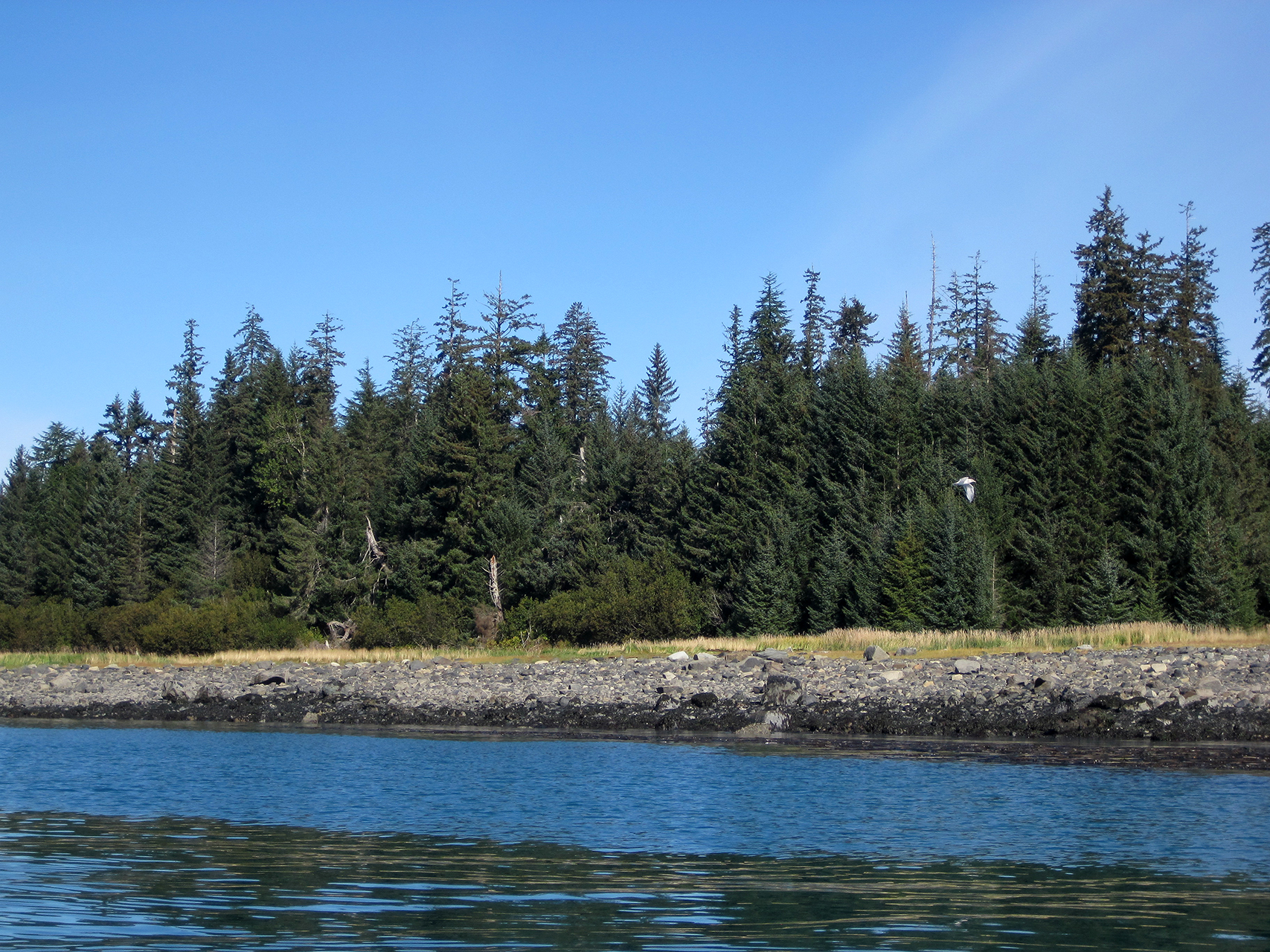 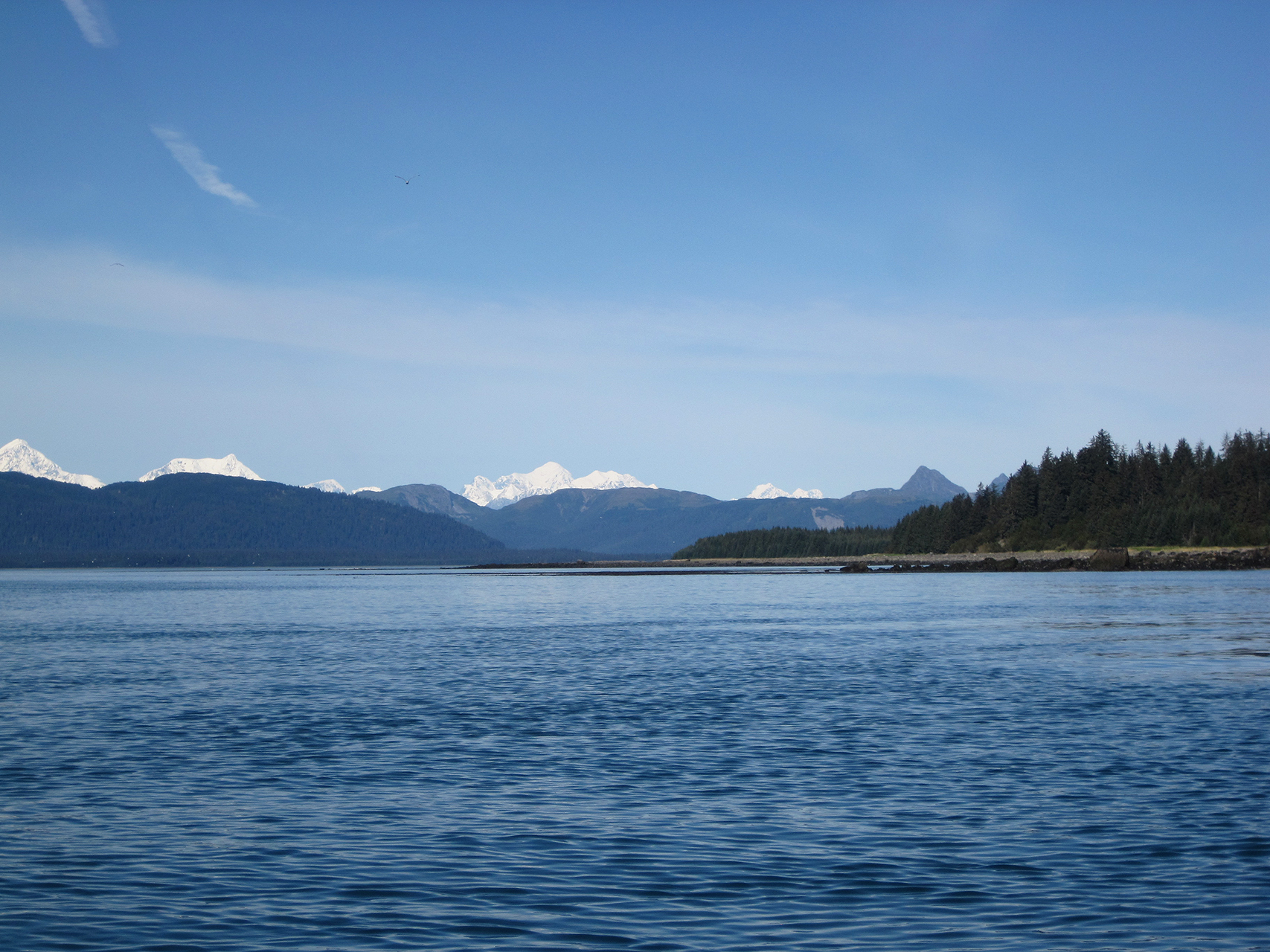 Brittney gave the four of us a choice. Usually, she led groups back along the shore of Lester Island and then recrossed Bartlett Cove near the dock area (retracing the route we’d just taken). Since it was so beautiful, though, she suggested crossing to the mainland by paddling clear across the mouth of Bartlett Cove. We were game, so we set out across the expanse of smooth water, headed for a little notch in the forest on the far shore. 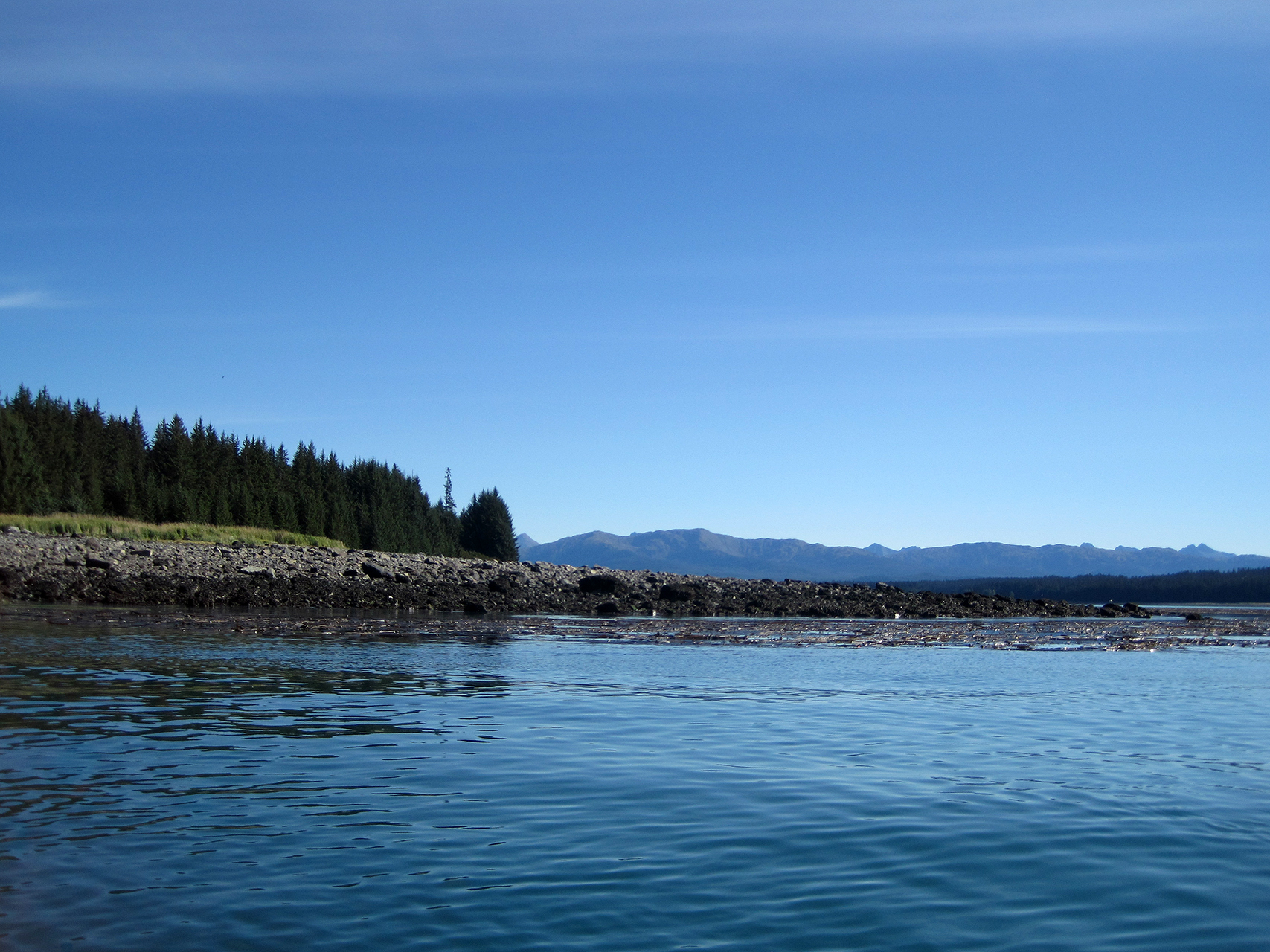 To our right was the full expanse of Glacier Bay. It was glorious. 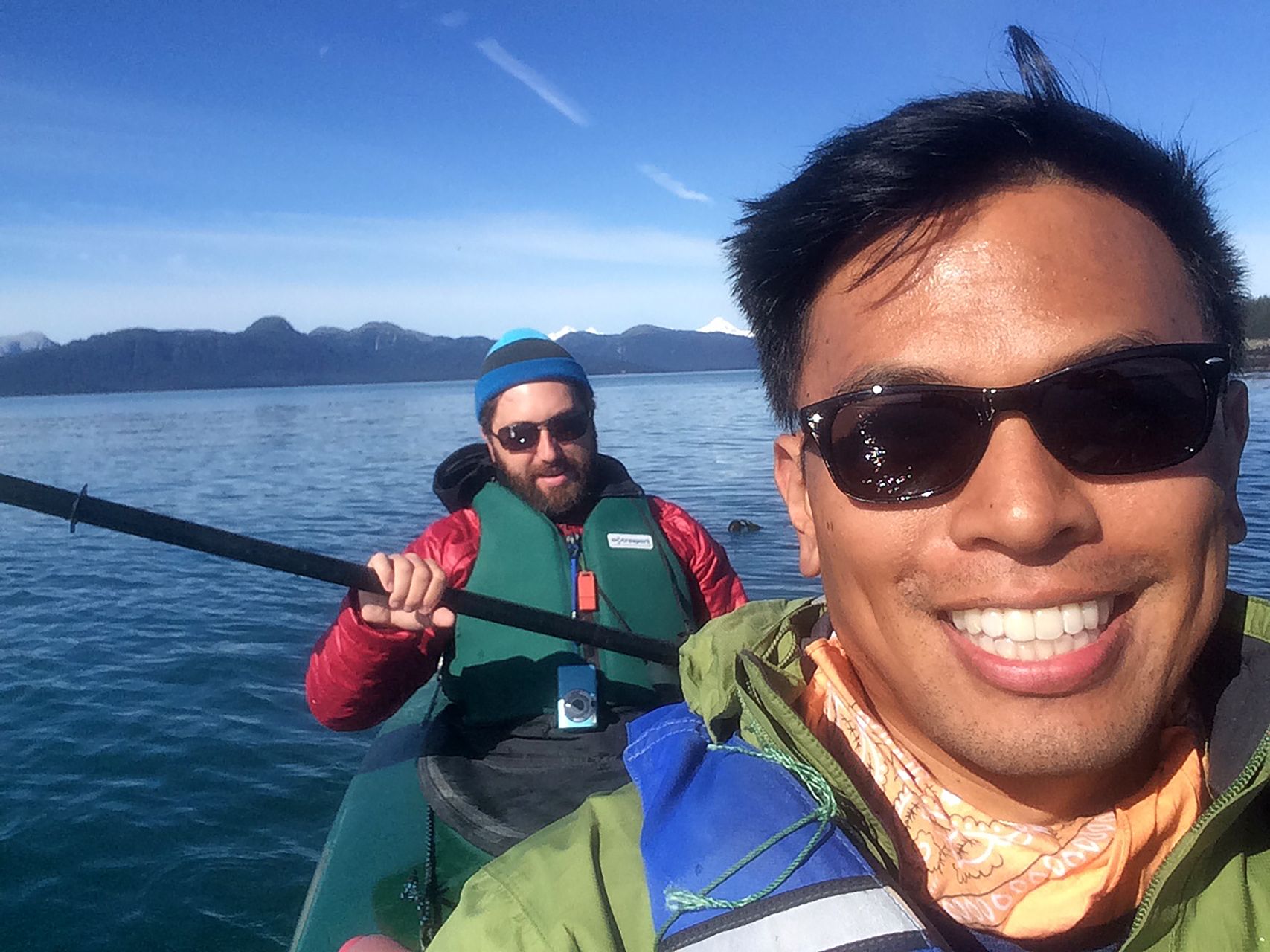 As we paddled, a Harbor Seal and some Sea Lions came to investigate. 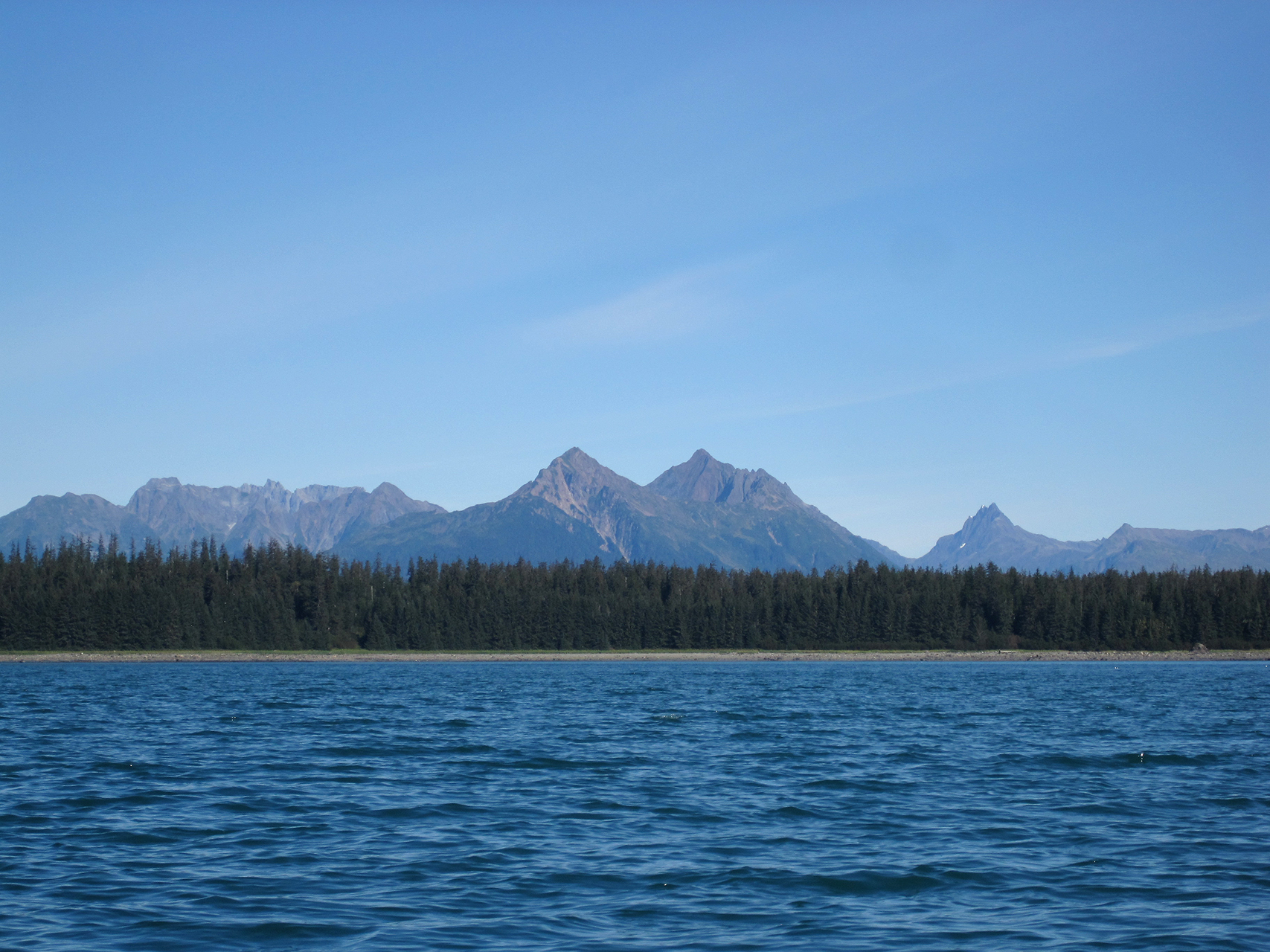 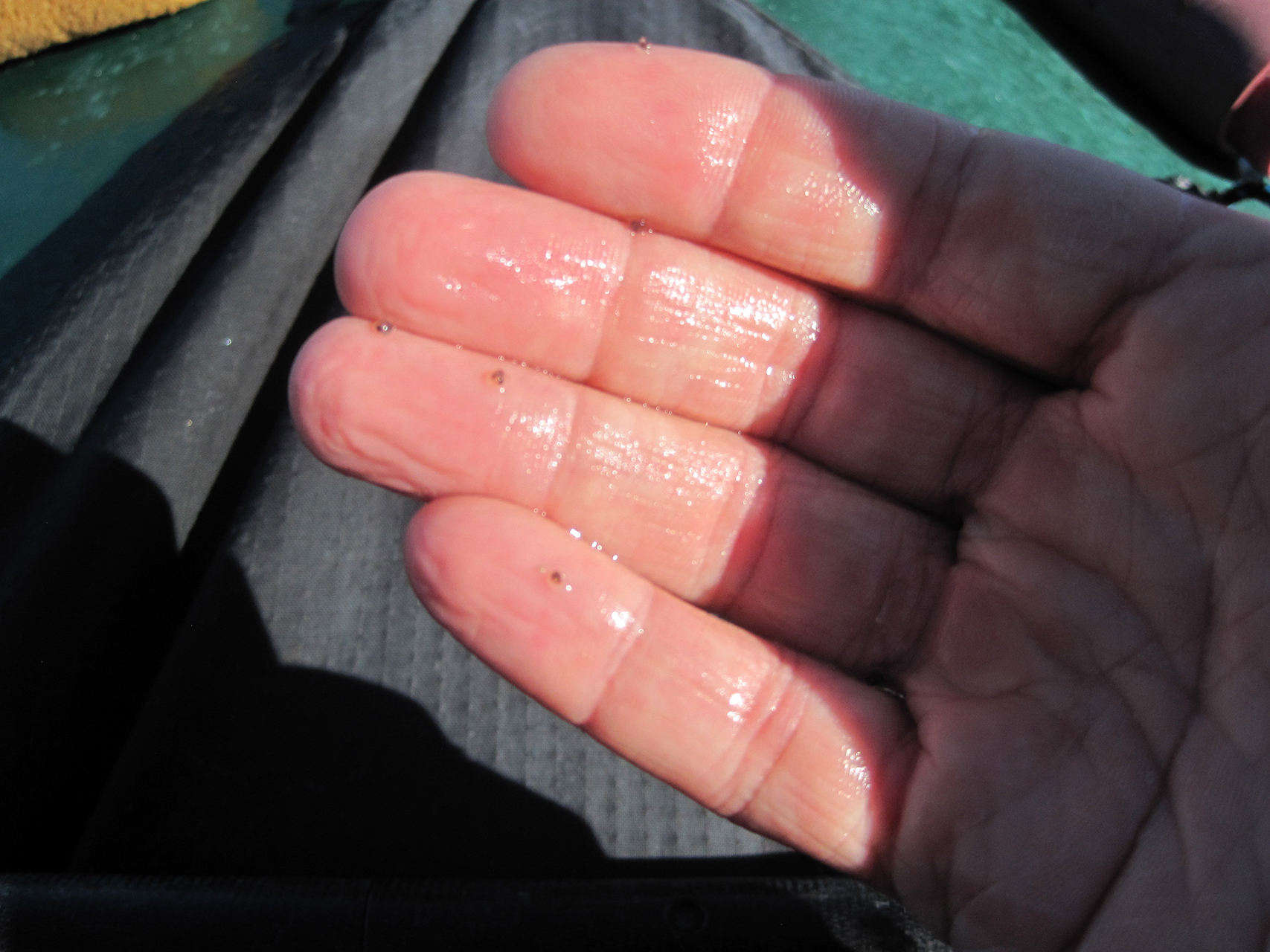 As we made our way along the mainland, southern shore of Bartlett Cove, we passed through some patches of organic debris, seaweed, bird feathers, and thousands upon thousands of immature snails. 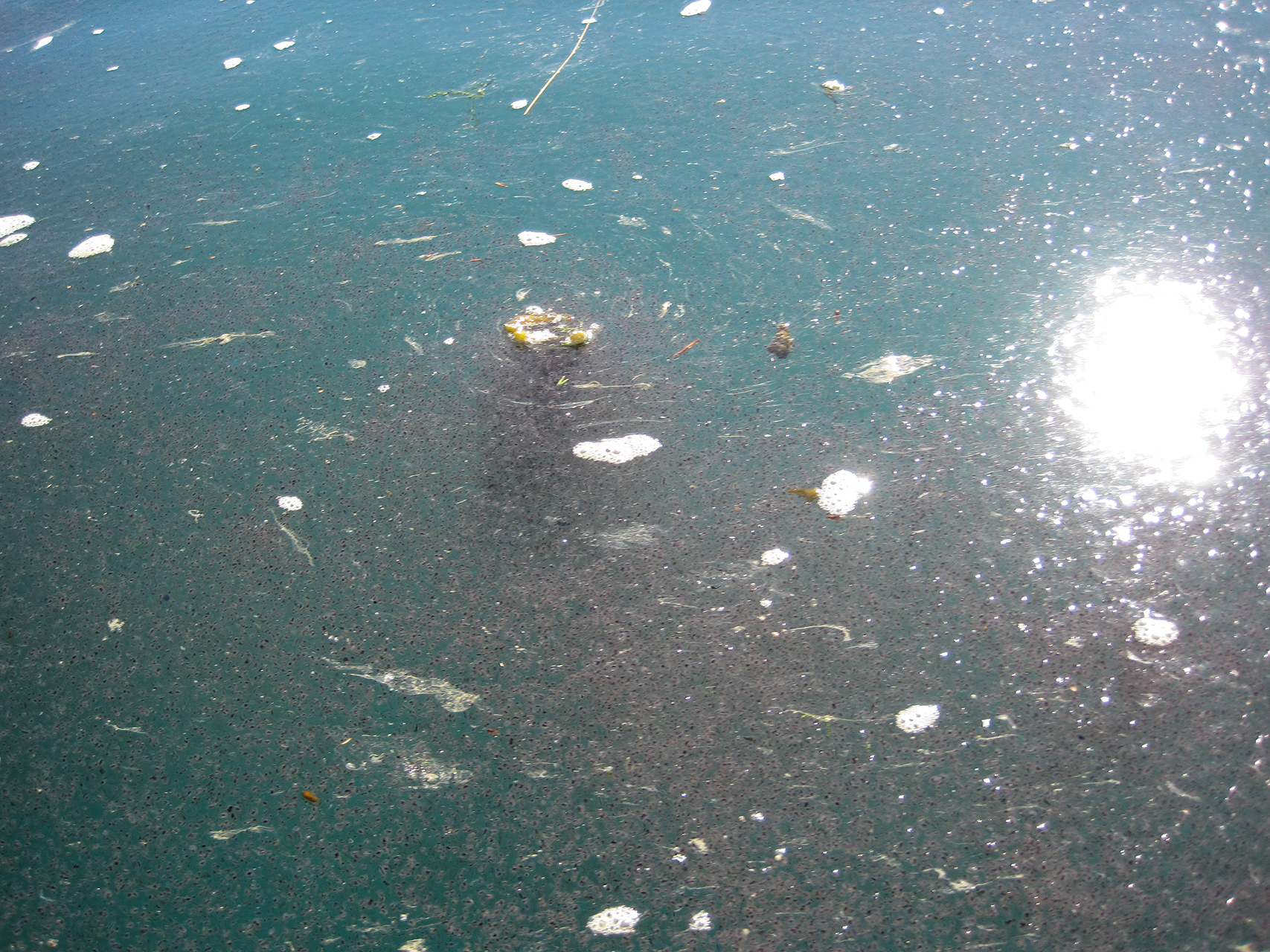 All too soon we were approaching the dock area.

The seaward side of the fuel dock’s pylons were crusted with barnacles and mussels. 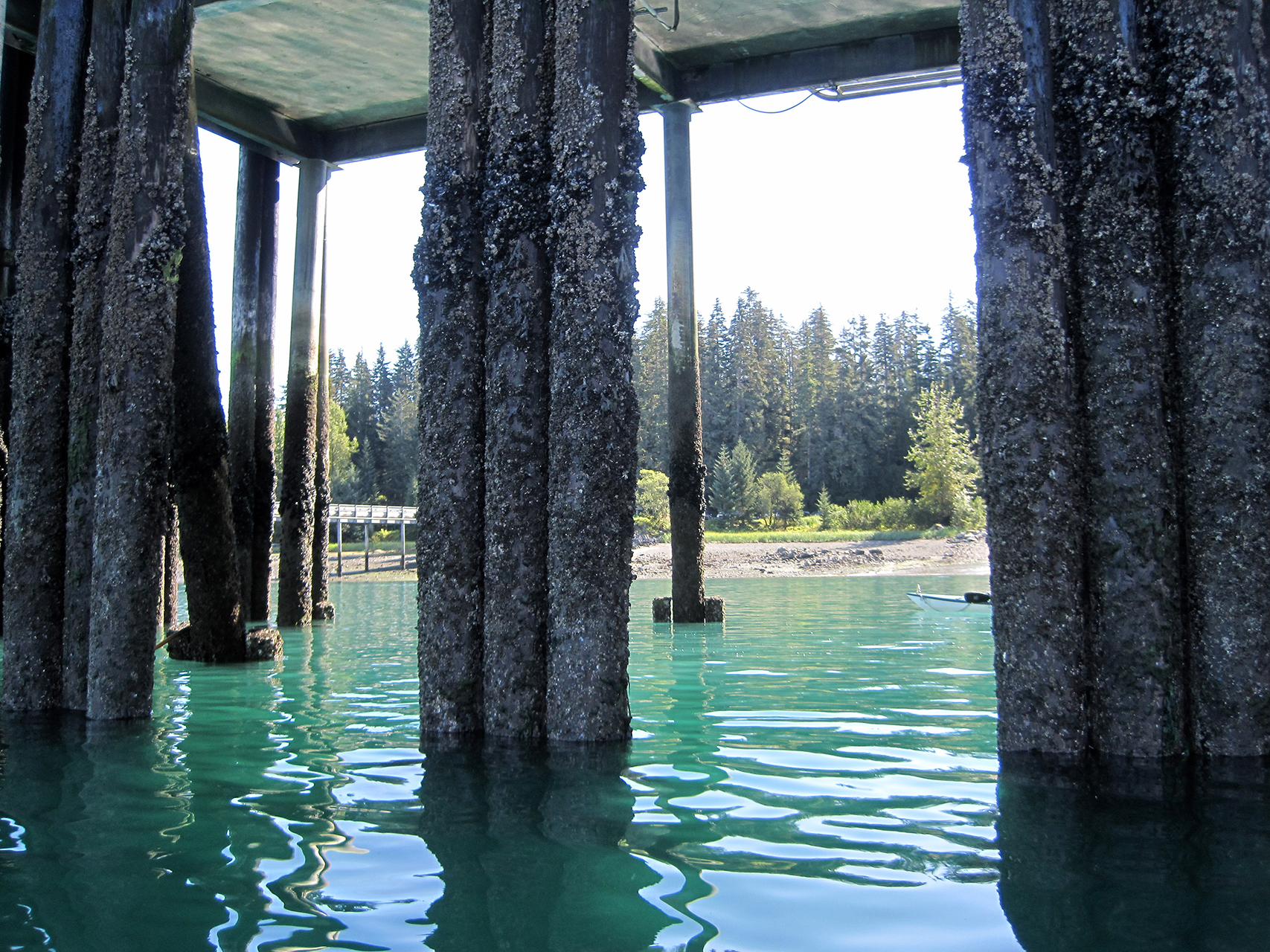 Back at the beach, we had been first in the water, so we were also first out of it. Although my legs were stiff from the position I had to maintain for the steering paddles, I could easily have gone out for another three hours in the afternoon. 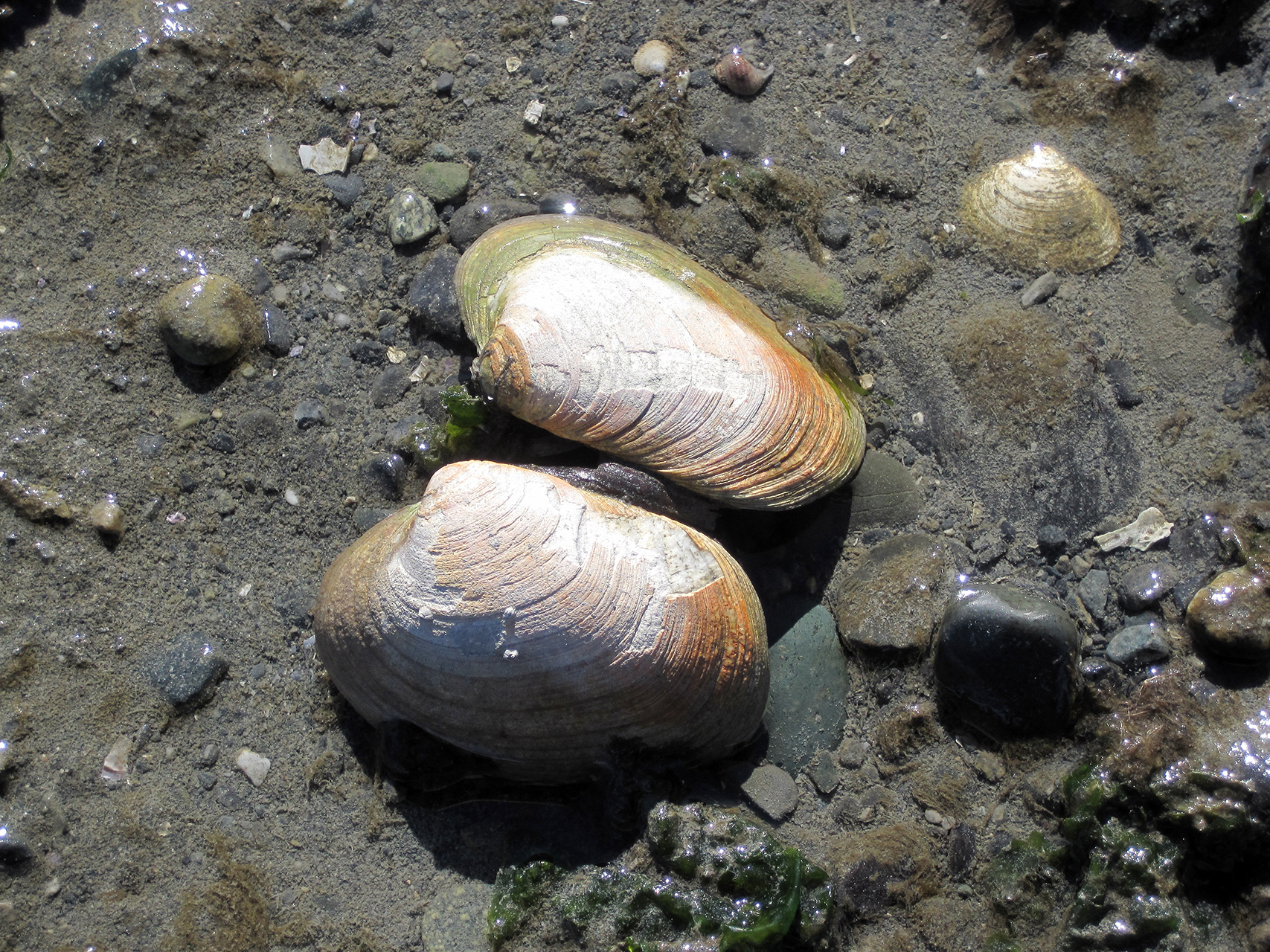 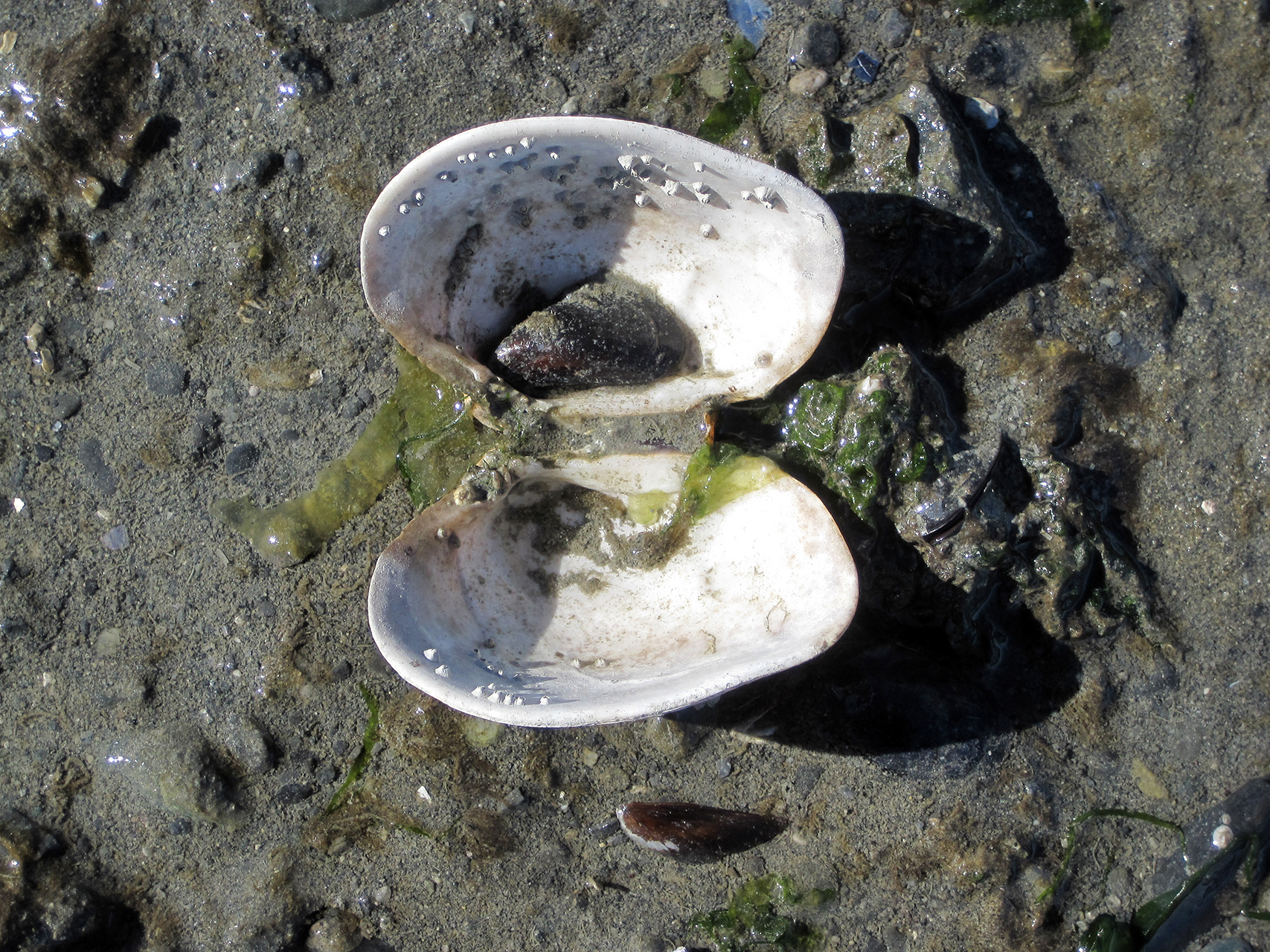 We removed our life preservers, boots, and spray skirts and retrieved our belongings. A squirrel (or some other animal) had gotten into the bag of the young woman and eaten her sandwich. Although she was perturbed, she blamed herself since after a summer in Gustavus, she should have known better than to leave food unsecured.

We thanked Brittney profusely, bid farewell to our companions, and headed back to the lodge. 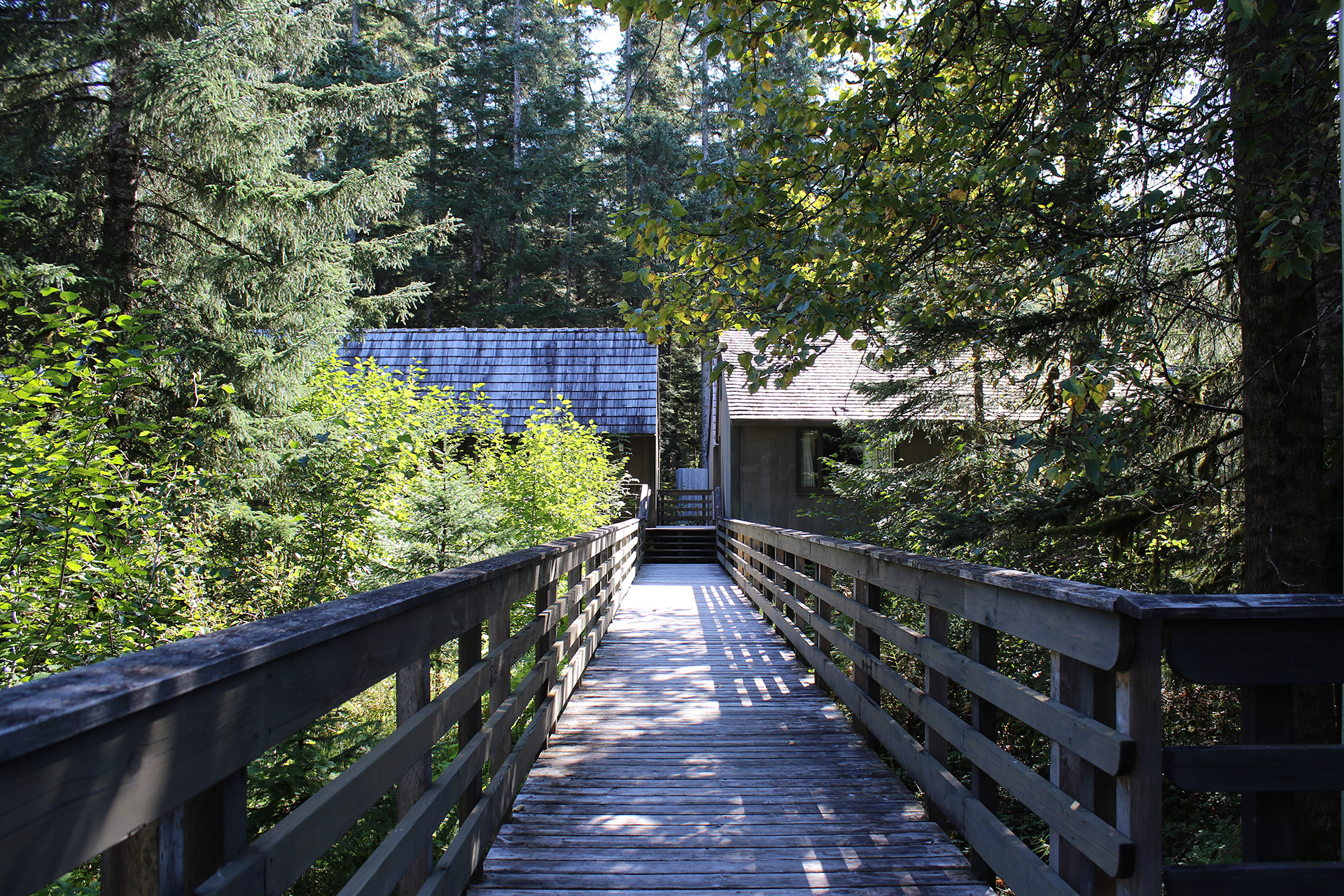 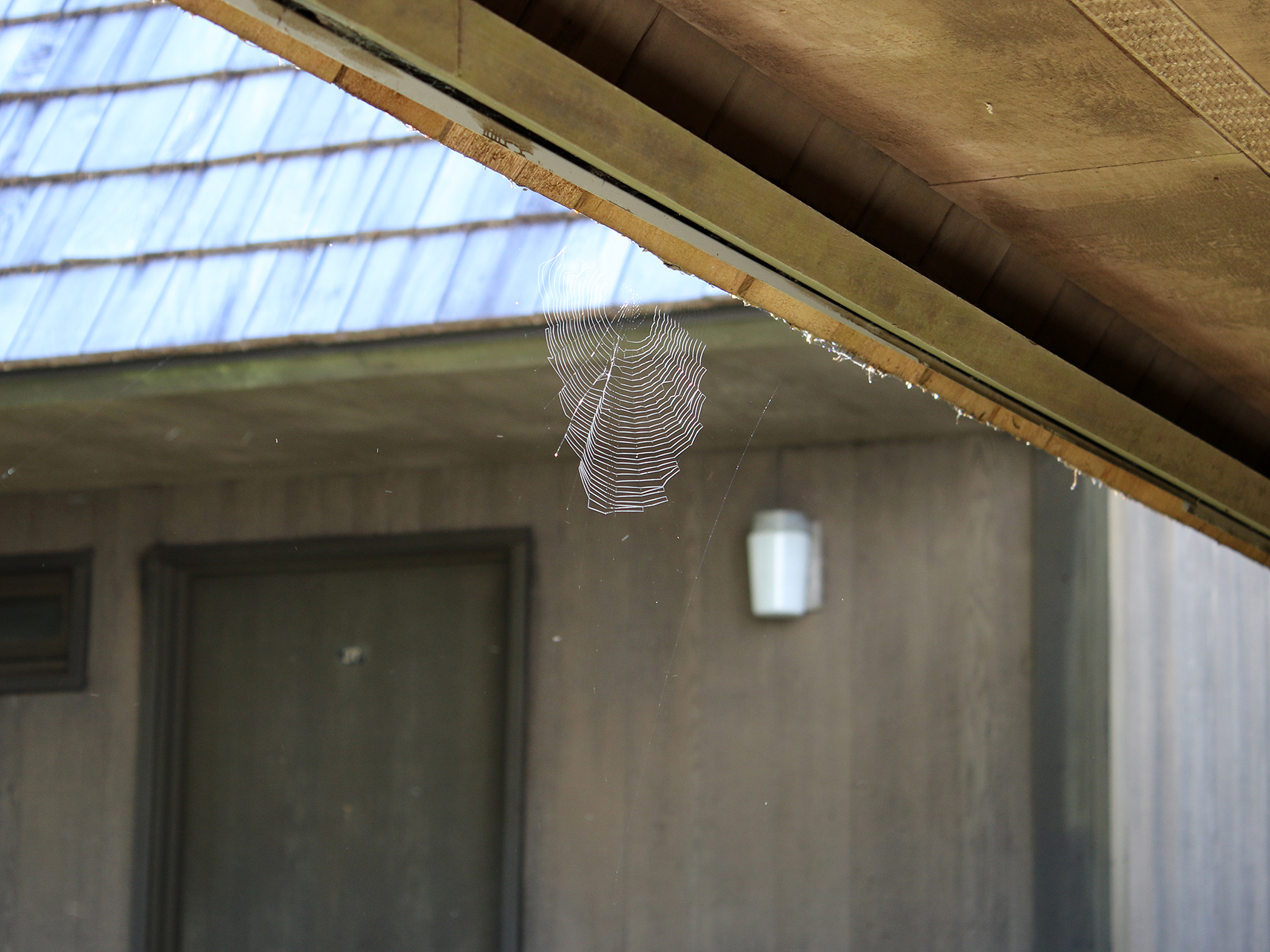 After our wonderful morning paddle, it was time to have some lunch in the quiet dining room before an afternoon ramble along the shoreline of Bartlett Cove. There was a bit of a buzz among the waitstaff and other young employees. This was the very end of the season, and the staff party with a Mardi Gras theme would be held that evening, explained our server, Stephania. While we were eating, we saw Joseph/Not Joseph come in with a Mardi Gras mask on. It looked like hijinks were in store. 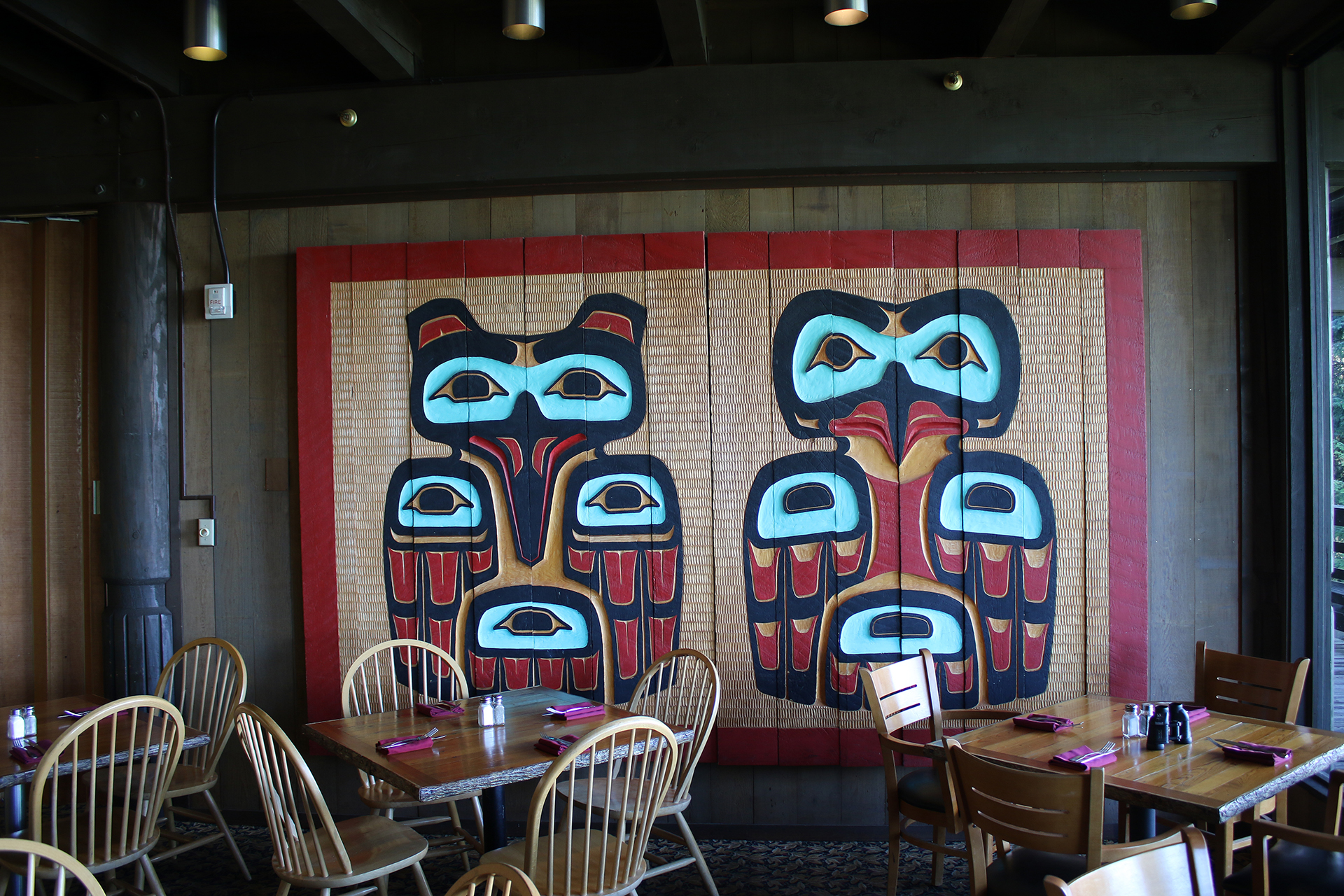