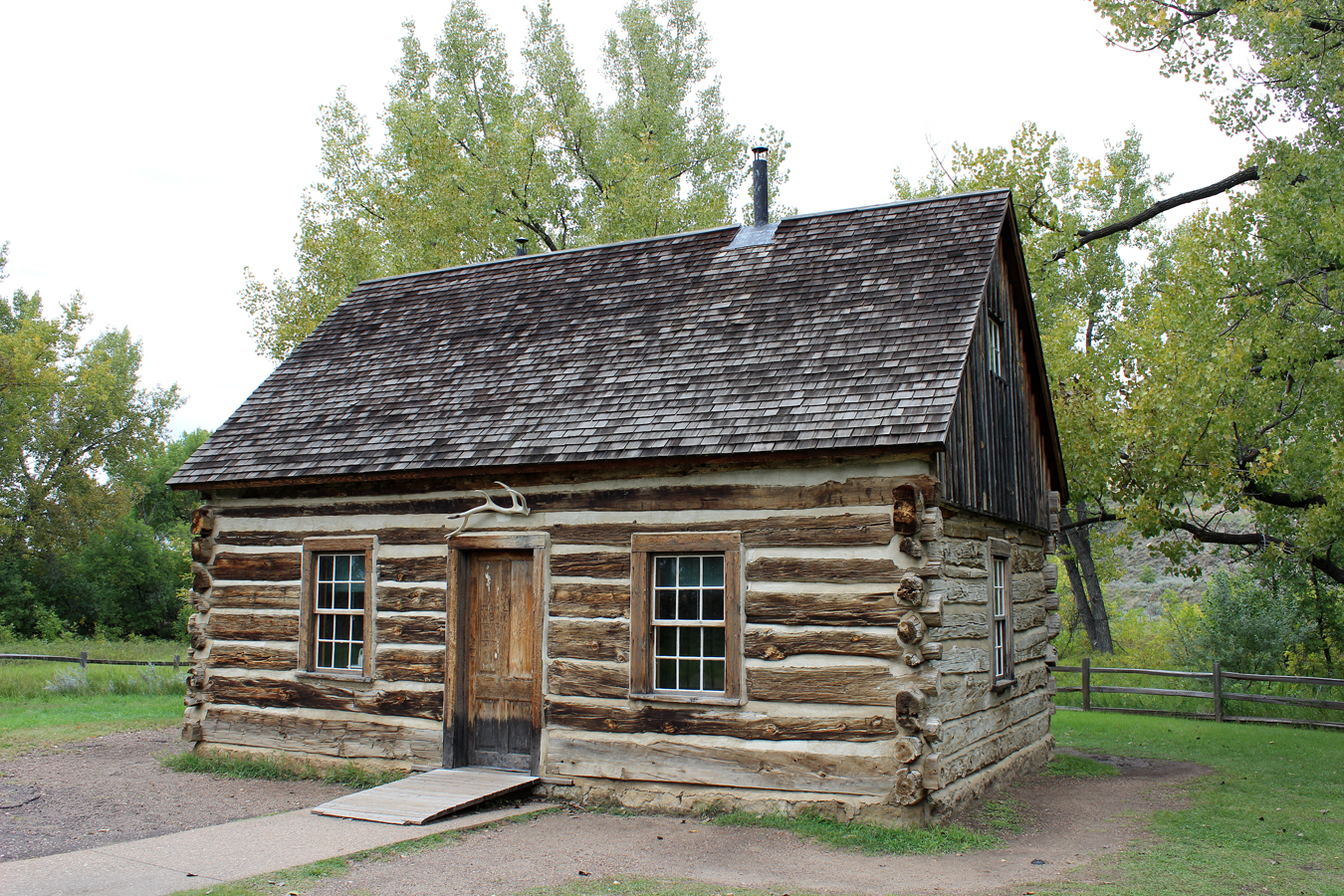 After spending the morning of Thursday, September 11 driving and hiking around the South Unit, Sean and I drove into Medora for lunch. On our way out of the park, we stopped at the Visitor Center, mostly to use the restroom, but also to have a look around.

While we were browsing in the bookstore, a ranger called that a tour was about to begin of the Maltese Cross Cabin. At first we ignored the call as a group of about a dozen visitors gathered around the ranger. We figured that we’d check out the cabin later after lunch.

The ranger began to give his talk there in the center, and we listened in as we continued to look at patches and pins and postcards. He briefly covered Theodore Roosevelt’s early life in New York and at Harvard before diving into the young man’s experiences in the Badlands, the incredulous reaction the locals had of him as a “New York dude,” and his motivations for heading west.

When Roosevelt first arrived in the Badlands in September 1883, his goal was little more than to hunt bison before they were extinct. But this was far from Roosevelt’s first foray into the wilderness. He’d been hunting in Minnesota and the far eastern edge of Dakota Territory a couple years earlier with his brother. More substantially, he’d spent a series of trips in the backwoods of Maine, developing an abiding love of the outdoors.

The ranger, whose name was Michael, asked his audience about their motivations in coming to Theodore Roosevelt National Park that afternoon. Sean and I were the only ones who, although not part of the audience proper, raised their hands when Ranger Michael broached the restorative power of nature. He encouraged us to join the tour, which we did.

The morning after he arrived in Little Missouri, Roosevelt engaged a reluctant Canadian, Joe Ferris, to guide him on a bison hunt. Bison had been so overhunted that Ferris was doubtful they’d even see one, but Roosevelt was persuasive. Ferris outfitted a buckboard, and the pair headed some seven miles south from Little Missouri (and the newly sprung-up rival town of Medora) through the Badlands toward a small ranch overseen by two other Canadians, Joe’s brother Sylvane Ferris and Bill Merrifield.

The ranch was the Maltese Cross, little more than a small, but comfortable cabin built from hardwood and a stretch of bottom land with common grazing range beyond. Roosevelt and Ferris used the Maltese Cross as home base for their hunt. 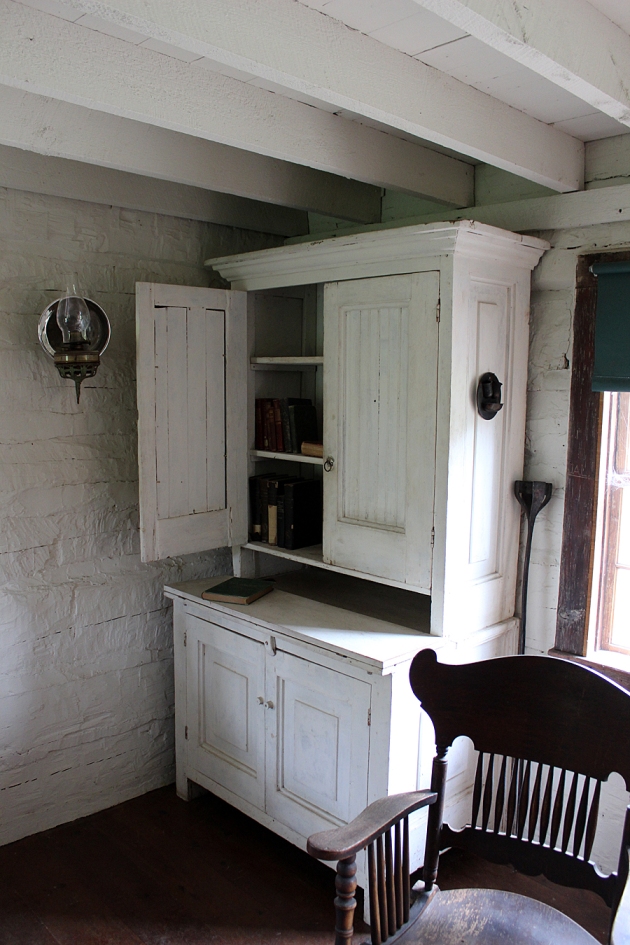 The brothers Ferris and Bill Merrifield afforded Roosevelt his first opportunities to ingratiate his bespectacled, Eastern self with the denizens of the Badlands of western Dakota Territory. They presented a pattern that was often repeated during Roosevelt’s early times in the Badlands: incredulity on the part of the locals that this skinny, four-eyed dude would amount to anything, followed by Roosevelt proving them wrong either through tenacity, pluck, or good-naturedness. With the Ferrises and Merrifield, it was a bobcat in the henhouse and Roosevelt’s excitement and willingness to help scare off the predator and gather the hens that began to endear him to these men.

After his earliest Dakota adventures, Roosevelt had his portrait made (in New York). Image: Theodore Roosevelt Collections, Harvard College Library.

Others, however, liked him straight off. The following morning, Joe Ferris and Roosevelt continued south toward Cannonball Creek, where Ferris suspected they’d find bison if there were any left to be found in the Badlands. They stayed the night at the small cabin of Scotsman Gregor Lang and his fourteen-year-old son, Lincoln.

Aided by the beam of light showing through the cabin door, I could make out that he was a young man, who wore large copious-looking glasses, through which I was being regarded with interest by a pair of twinkling eyes. Amply supporting them was the expansive grin overspreading his prominent, forceful lower face, plainly revealing a set of larger white teeth. Smiling teeth, yet withal conveying a strong suggestion of hang-and-rattle…

This is my son, Mr. Roosevelt,” [Father] said. Then somehow or other I found both my hands in the solid double grip of our guest…

“Dee-lighted to meet you, Lincoln!”

Young and all, as I was, the consciousness was instantly borne in upon me of meeting a man different from any I had ever met before. I fell for him strong.

Roosevelt and Gregor Lang talked long into the night about politics, ranching, America, and life in general.

The hunt took two weeks. For Joe Ferris, it was misery. If it wasn’t raining, turning the bentonitic clay into slippery, sticky gumbo, then it was searingly hot during the day and freezing during the night. The horses ran off, Roosevelt accidentally crawled through a patch of prickly pear cactus, Roosevelt also struck himself in the forehead with his rifle butt when his horse reared. To make matters worse, Roosevelt, because of his poor eyesight, was a terrible shot. And they encountered precious few bison.

“Bad luck followed us like a yellow dog follows a drunkard.”
-Joe Ferris

As miserable as Ferris was, Roosevelt was dee-lighted by everything. Ferris was amazed that the easterner seemed to be having the time of his life. When Ferris finally suggested that they call off the hunt due to weather and injury, Roosevelt wouldn’t hear of it.

Then, on September 20, Roosevelt shot and killed a bison. He was so excited that he did what Ferris described as “a little Indian war dance” and pulled out a 100-dollar bill as a tip for Ferris.

I never saw anyone so enthused in my life, and by golly, I was pretty enthused myself…I was plumb tired out…I never saw any more buffalo after that. They disappeared from the range…In eighty-two there were lots of buffalo. An old hunter there used to kill the buffalo just for their tongues. He used to smoke their tongues and sell them for twenty-five cents apiece; the next year, eighty-three, there was none left. That was one of the sad things that happened. It was too bad they were allowed to be killed off in such wanton style.

Roosevelt, for his part, wrote to his young wife:

Hurrah! The luck has turned at last. I will bring you home the head of a great buffalo bull, and the antlers of two superb stags.

They butchered the bison, taking the head and steaks back with them to the Maltese Cross Cabin. The head was shipped to New York for mounting. The men ate the steaks.

In the midst of the excitement of his first bison hunt, heady with enthusiasm for the West, Roosevelt decided to invest in a cattle ranch. He first approached Gregor Lang, who declined due to his commitment to his current employer. Instead, at Lang’s suggestion, he bought the Maltese Cross Ranch for a down-payment of $14,000. Roosevelt wrote the check and handed it to Bill Merrifield without requesting a receipt.

The Maltese Cross was now Roosevelt’s, although he had sunk a great portion of his annual income into its purchase. It was to be the first of two ranches that Roosevelt would own in the Badlands near Medora.

The cabin has survived the 131 years since Roosevelt bought it. Among the vintage furnishings displayed in the cabin is Roosevelt’s writing desk. At this desk, Roosevelt wrote the majority of his second book (and first chronicling his time in the West and his philosophical musings about nature), Hunting Trips of a Ranchman. 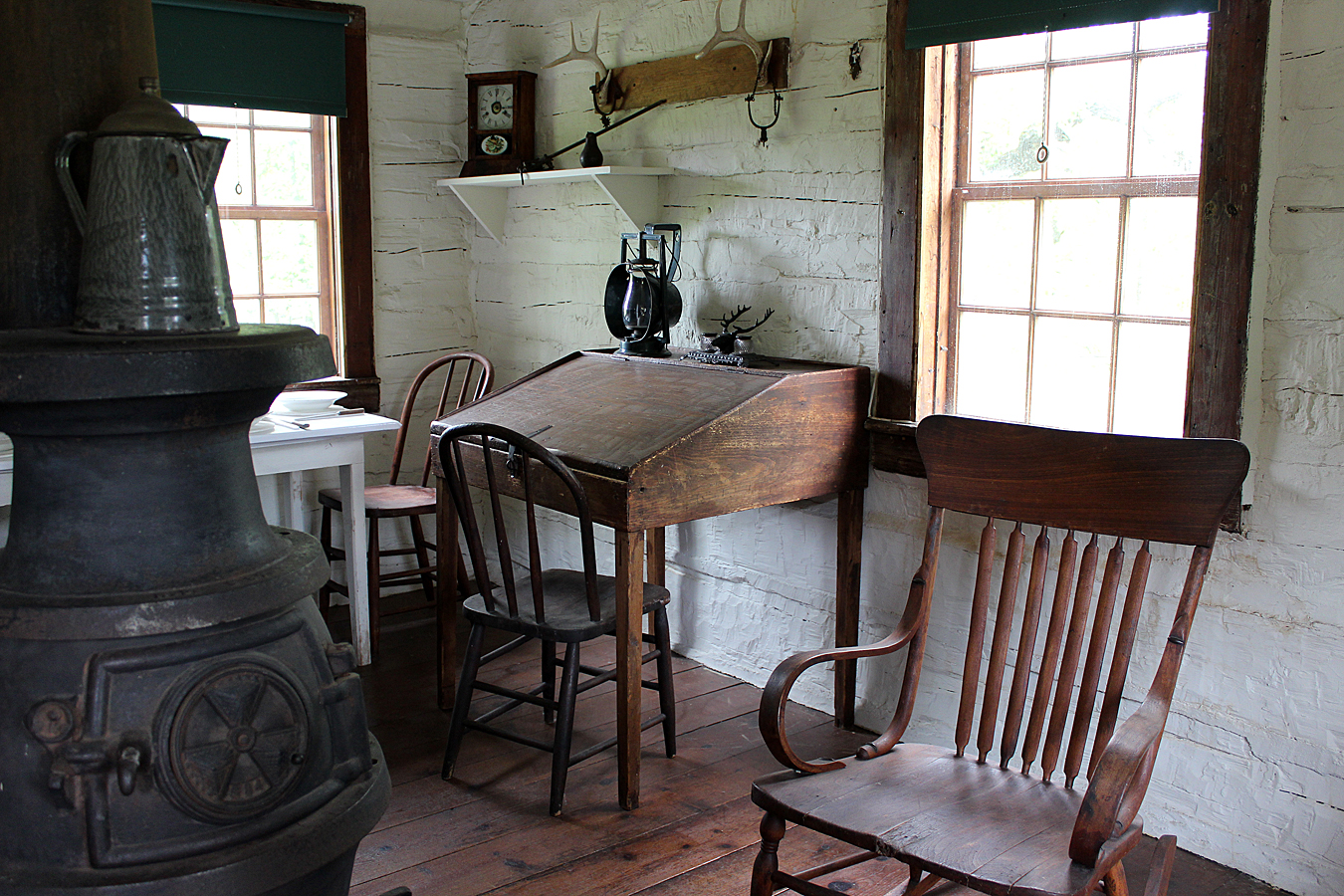 The other item of Roosevelt’s held in the cabin is a traveling trunk stamped with his initials: T.R.

Ranger Michael gave an excellent biographical sketch of Roosevelt, focusing both on his time in the Badlands and on his later family life. Most of the other visitors on the tour were retirees who asked about various aspects of the cabin and Roosevelt’s biography. To Ranger Michael’s great credit, he emphasized the experiential aspects of Roosevelt’s time in the Badlands. Even though we were standing in the Maltese Cross Cabin, the artifacts were less important than the surrounding landscapes.

A question touched on Roosevelt’s conservation ethic and the oil boom surrounding the park. Ranger Michael talked about how originally the intention was that the three units of the park be connected as one large National Park along the Little Missouri River, but there was too much private property between the major units to make if feasible. That land remains the Little Missouri National Grassland peppered with an array of private inholdings. Ranger Michael told us that, much like many private landowners in the area, the National Park does not own the mineral rights to the land, meaning that oil companies could dig horizontally under the park to get at oil.

The natural resources of our country are in danger of exhaustion if we permit the old wasteful methods of exploiting them longer to continue.

The Maltese Cross Cabin originally stood some seven miles south of Medora. It was moved in 1939 when it was the centerpiece of the North Dakota pavilion at the New York Worlds Fair. It then stood on the grounds of the state capital at Bismarck until it was acquired by the Park Service and moved to the Visitor Center in Medora. 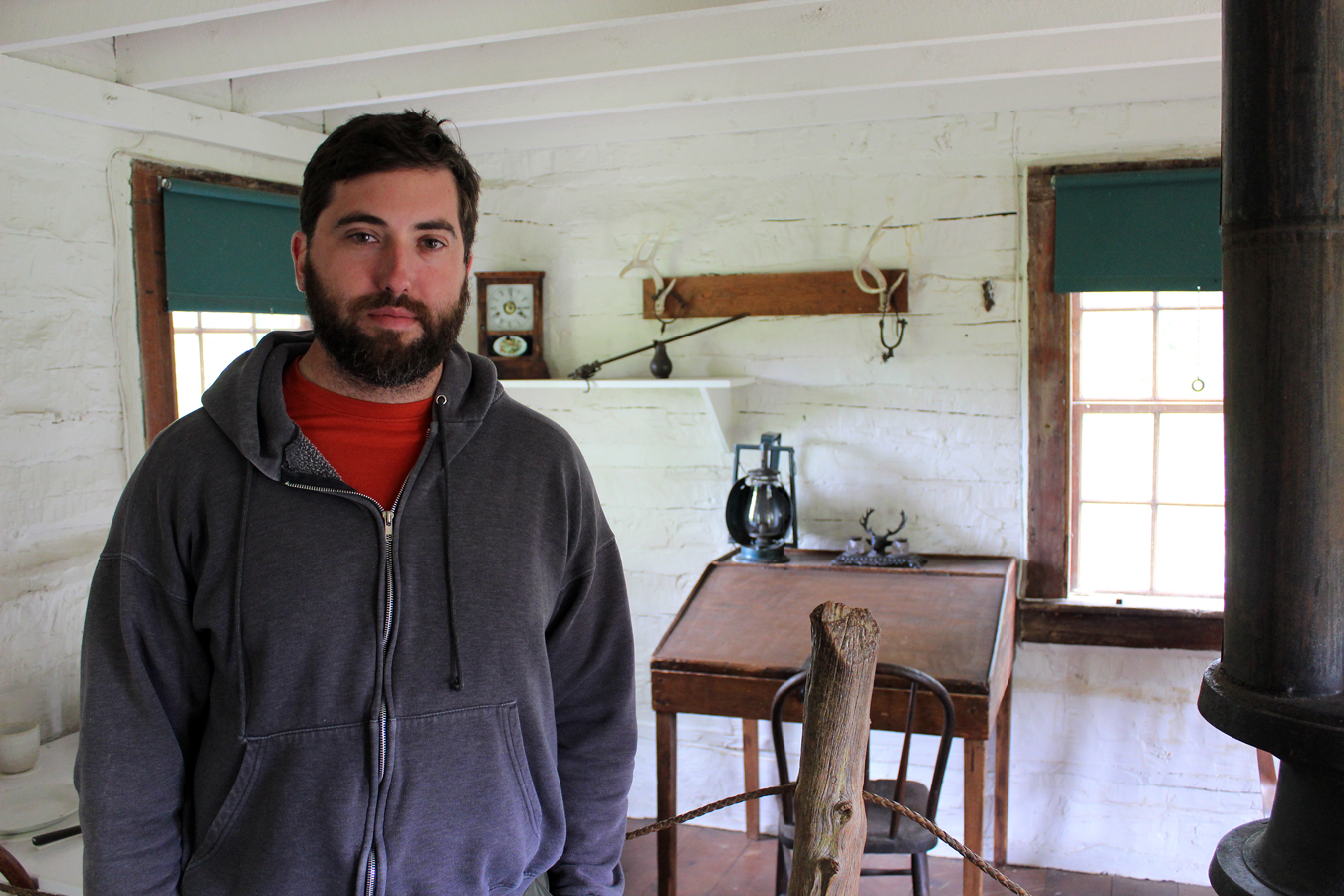 Back in the Visitor Center after the tour, we had a chance to chat with Ranger Michael a bit. He noted that we were from Chicago. He had grown up as a boy in suburban Chicago before his family moved to Great Falls, Idaho. He asked us where we were staying, and we said Cottonwood Campground. He remarked how cold it had gotten the night before, and we laughed and agreed that it was pretty bad. The next night was forecast to be worse.

“If you have a Nalgene, a real Nalgene, you can boil water, pour it into it, and then put the whole thing into a sock and hug it all night for warmth. I usually do that. throw one in by my feet and then a couple more to keep warm.” -Ranger Michael.

After visiting the exhibition room with artifacts from Roosevelt’s ranching days, we made our purchases, thanked Ranger Michael for the tip and tour, and left.

On the grounds of the Maltese Cross Cabin. Image: Sean M. Santos

After our tour, we headed into town for a late lunch at Boots Bar & Grill. Locally-sourced Elk Burgers hit the spot. We then explored Medora.

Not too long after meeting Roosevelt, Joe Ferris abandoned guiding hunters to open a general store, which still stands in Medora. Unfortunately for us, although it was still early September, it was closed for the season. 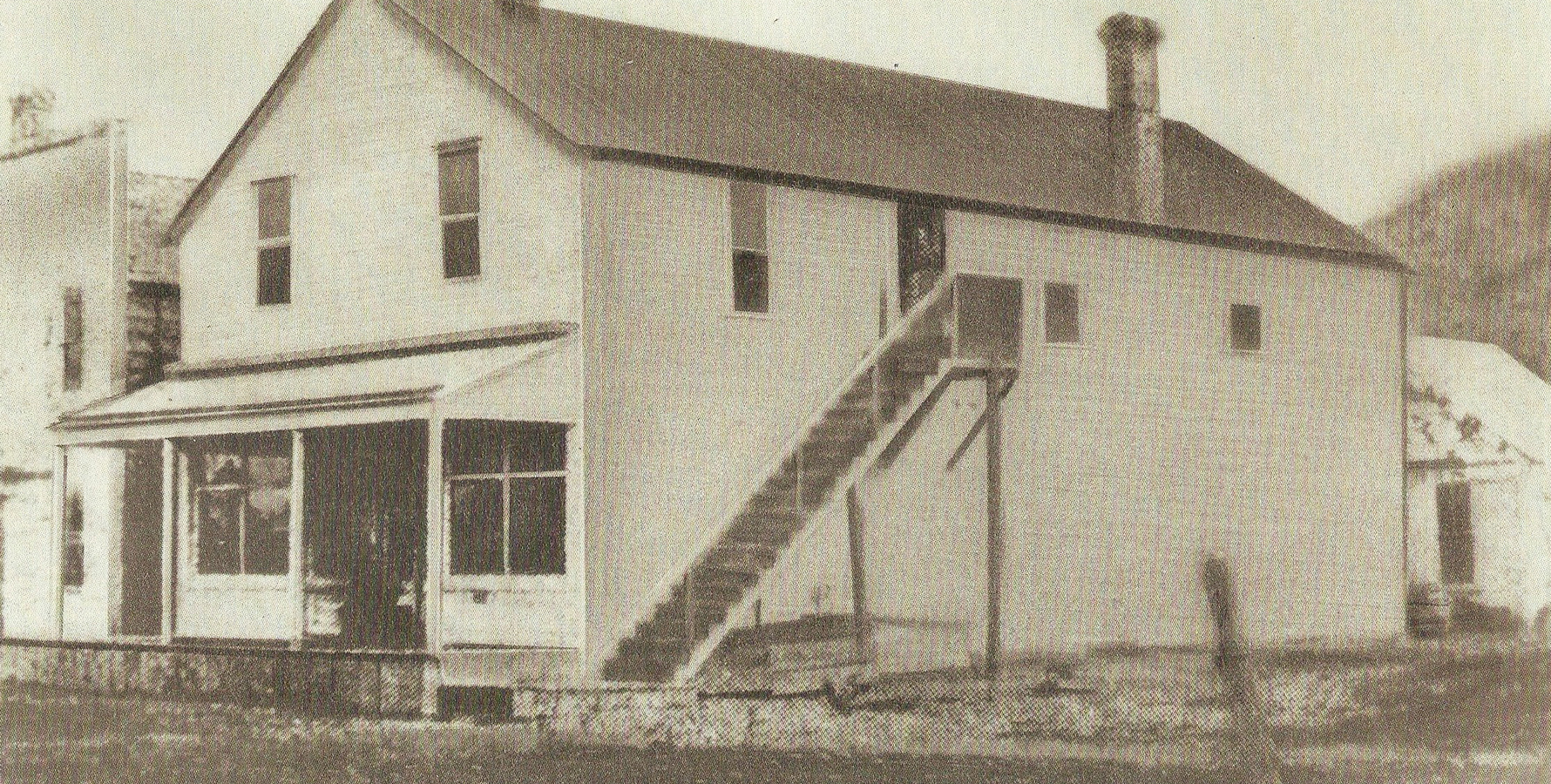