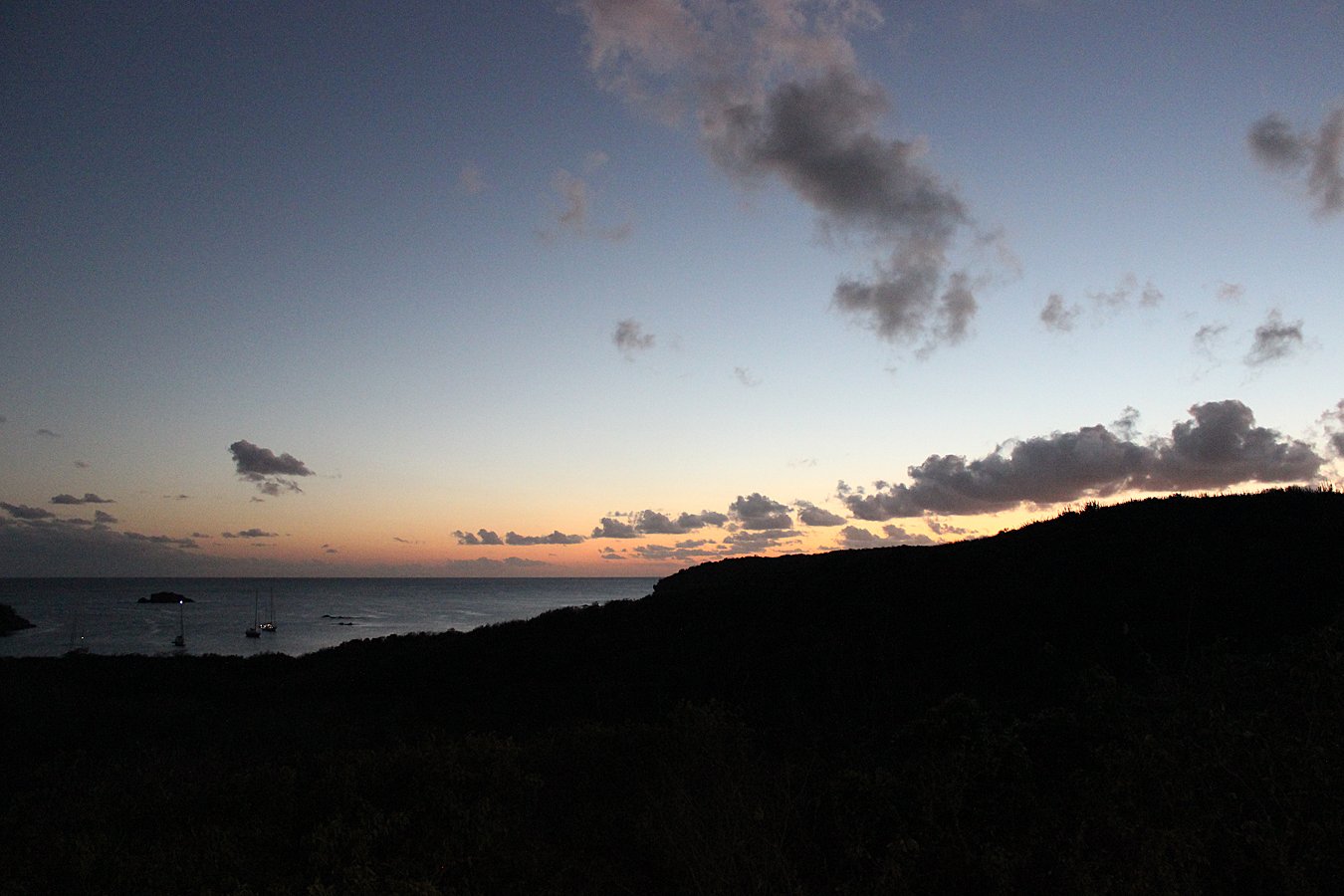 After Maho Bay, we headed back to Concordia for our final evening on the island. We had been planning to cook a pasta dinner in our loft, but Sean made the executive decision that we should have dinner at Cafe Concordia for a third and final time. Plus, is was live music night.

The common area near the registration office at Concordia.

Sean and I went down to registration to settle our bill and check out since we’d be leaving before the office opened next morning. They gave Sean the option of refunding the $30 key deposit or donating it to Friends of Virgin Islands National Park. Sean decided to make the donation. Since a $30 donation equals a membership in the organization, Sean is now a member (and therefore entitled to a 20% discount at Concordia during the low season (May-November)). Everything at Concordia had been just first rate. (And three weeks after we got back, Sean received a package from Concordia containing a hair dryer. Someone must have left it in our unit, but it wasn’t any of ours. But still, what kind of hotel does that? Pretty impressive.) We definitely intend to return.

In the office we encountered a young gay couple (the third gay couple we’d seen at Concordia). While Sean was making our dinner reservation, they walked past me, and I nodded and said hello. They didn’t respond, but just continued talking about how they’d “never do that again.” Thenceforth, they were the Skinny Judgy Gays. We’d encounter them again the next day at the airport when they would be on Bethany’s flight to JFK. The pool area at Concordia. 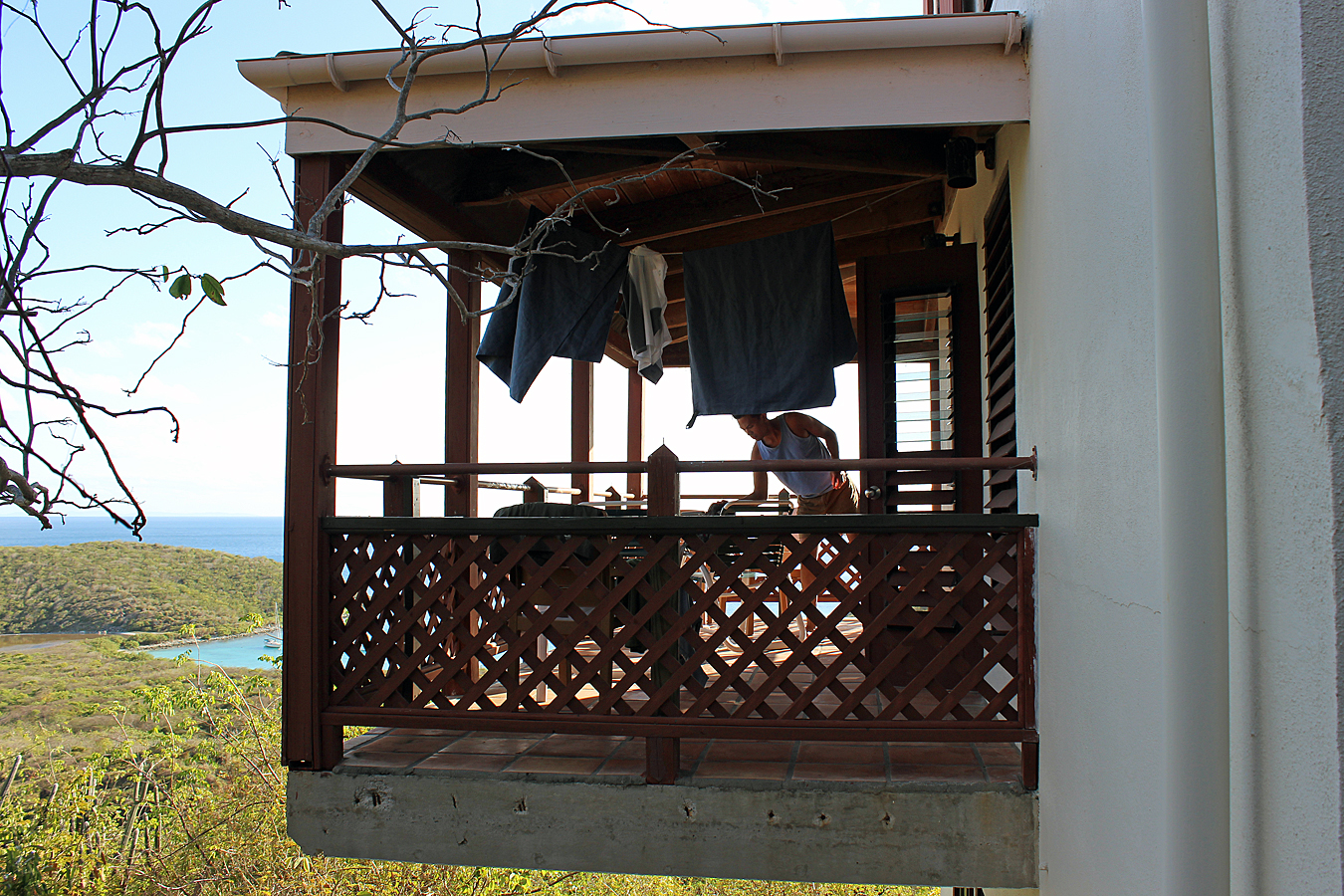 Sean collects the clothes and towels drying on the balcony.

Cafe Concordia was packed, but our table was waiting. While we were walking across the dining room to be seated, we passed Jody, our fantastic server from the night before. She said, “I’ve got your table again,” and gave me a high five. All the serving staff were frazzled because it was so busy. We told Jody not to worry about our table, that we were fine sitting and relaxing and chatting over our cocktails while she handled the more demanding tables. The food was, again, outstanding. In all, it made for a splendid final evening.

After dinner, we returned to our loft to pack. Bethany calculated when we needed to leave in the morning (6:30am) to catch the ferry we needed in order to get to Charlotte Amalie (accounting for traffic) and return the Jeep before arriving at the airport. We’d need to go through customs, so we wanted to give ourselves plenty of time.

Clearly my most important souvenir.

Bethany also created a Google spreadsheet to track our expenses. Sean had put the lodging and car rental on his credit card, and all the rest of us had picked up food and incidentals. Each taking turns was so preferable to trying to split every bill. Bethany’s master spreadsheet calculated who owed and who was owed, making it super simple to settle up.

We were all awake before 5:30am the following morning to shower and pack up the Jeep.

The drive to Cruz Bay was quiet and uneventful. We took North Shore Road for one last glimpse of the gorgeous vistas. We ended up being so early at the ferry dock that we were on time for a ferry two ferries earlier than the one we were hoping to catch.

As we left Cruz Bay harbor, Caribbean Martins darted in the air around us hunting for their breakfasts. While we crossed back to St. Thomas, we breakfasted on sandwiches Sean had assembled the night before. Image: Adam Geffen

We gassed up the Jeep in Charlotte Amalie and returned it to Discount Car Rental with no problems at all. Throughout the trip, every business we dealt with was pretty great. All the TripAdvisor.com-induced fretting I’d done before the trip was for nothing.

A fellow from Discount gave us a lift to the airport in the Jeep we’d just returned. Four of us crammed into the back seat made for a wild ride.

We were so early at the airport that the Delta counter (for Adam and Phil’s flight) wasn’t even open yet. We got a second breakfast of johnnycakes and coffee from the food counter and sat around playing knock-off Uno, which Sean had brought with him.

All of our flights departed within an hour of each other. First Bethany to JFK, then Sean and me to Miami, and then Adam and Phil to Atlanta.

Sean’s and my flights were uneventful, and soon we were back on the ground at a snowy O’Hare. While we were waiting in line at the taxi stand, the couple in front of us sported duffle bags from Atlantis Cruise Lines (the gayest of the gay cruise lines).

During the drive home in the cab, Sean ordered Caribbean food for us from a place on Devon. We weren’t quite ready to be home, and ate it while listening to Sean’s Bob Marley albums.

And Elsa was glad to see us.