General Grant National Park was established in 1890 to protect 154 acres of the General Grant Grove of Giant Sequoias. Then, fifty years later, General Grant National Park was transformed into Kings Canyon National Park, 461,901 acres of mostly wilderness. The push to protect a greater portion of the Sierra Nevada as a wilderness Park was led in large part by Franklin Roosevelt’s legendary Secretary of the Interior, Harold Ickes. The lands that would become Kings Canyon National Park were held by the Forest Service. In the 1930s, advocacy organizations like the Sierra Club and the National Parks Association were becoming increasingly concerned that development in the Parks was destroying their wilderness qualities. They felt that the lands in question may be better off managed as wilderness by the Forest Service rather than developed for visitors by the Park Service. This led to Ickes’ lobbying the organizations for support in the creation of a new National Park, the reverse of how these things usually happened. As the 1930s drew to a close, FDR’s enthusiasm for the new Park grew after Ickes shared with the president a book of images of the Kings Canyon region by famed photographer Ansel Adams. By early 1940, Ickes and Roosevelt had swayed Congress, and the president signed the establishing legislation for the Park on March 1. In 1965, Lyndon Johnson signed legislation that further expanded the Park to its present boundaries.

On the Fourth of July, Sean and I awoke in our little cabin in Three Rivers at about the same time as we had the day before. Even though we were not catching a shuttle this time, we wanted to get an early start for our day in Kings Canyon. After some cereal, we were on the road by 7:15am.

We opted against taking Generals Highway through Sequoia National Park to reach Kings Canyon. Partly because of the road construction, partly to see some different scenery, and partly because I did not care to drive that road, thank you very much.

Our route, guided by spotty GPS on Sean’s phone, led us down from Three Rivers and then north through the rolling, grassy foothills of the Sierra Nevada. For a long time we were on Dry Creek Road, occasionally one lane, and occasionally shared with wandering cattle.

Eventually, after winding past many ranches and a few small towns, we entered Sequoia National Forest and started to gain elevation in earnest. We were headed for the Grant Grove section of Kings Canyon, where we would join Generals Highway to get to the canyon proper. 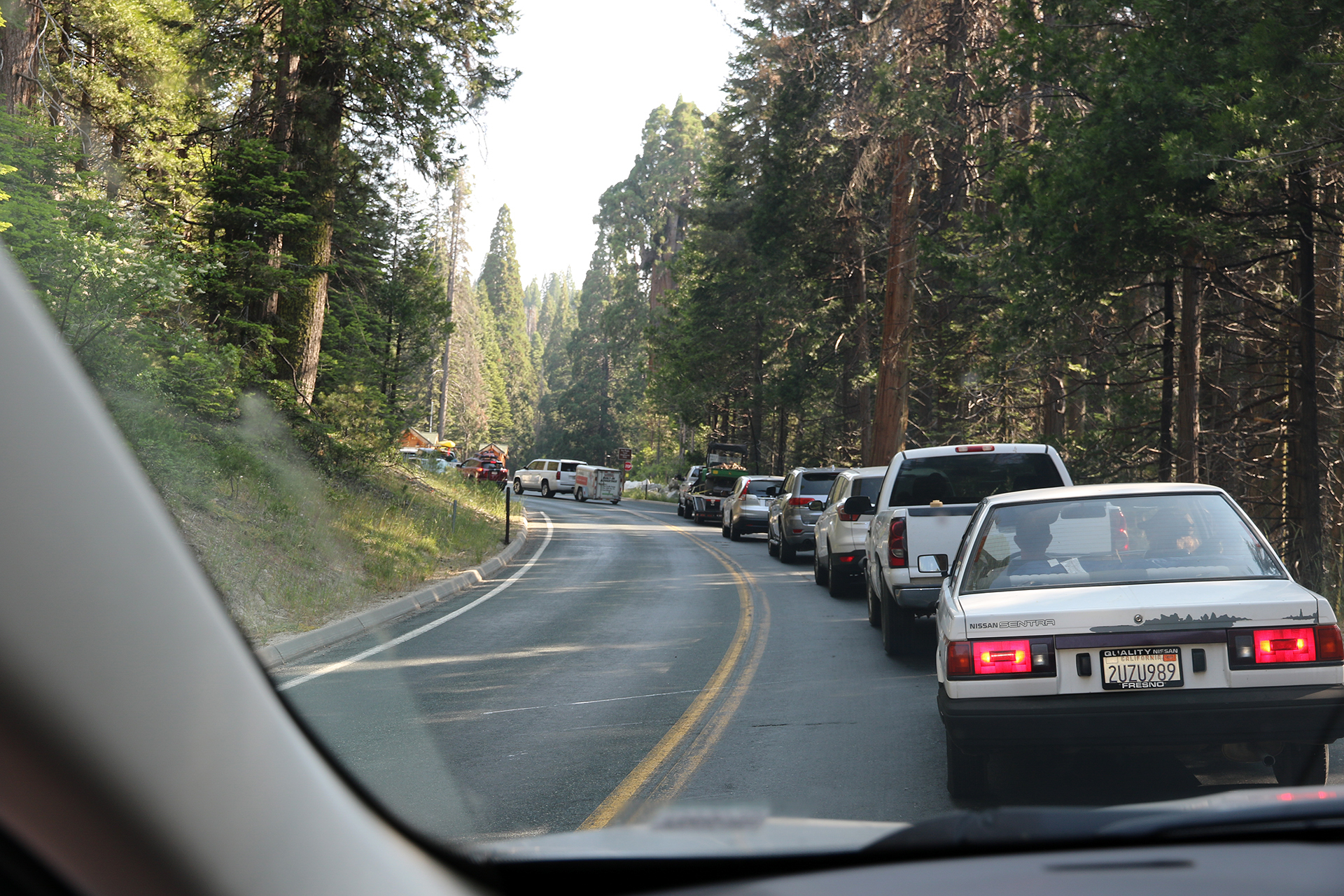 We arrived at the Big Stump entrance just about an hour and forty-five minutes after we’d departed Three Rivers, which was still quicker than if we’d gone through Sequoia.

Despite the line at the entrance station, there was ample parking at Grant Grove Village. We were hungry, so we decided to have a proper second breakfast (lunch? brunch?) at Grant Grove Restaurant. 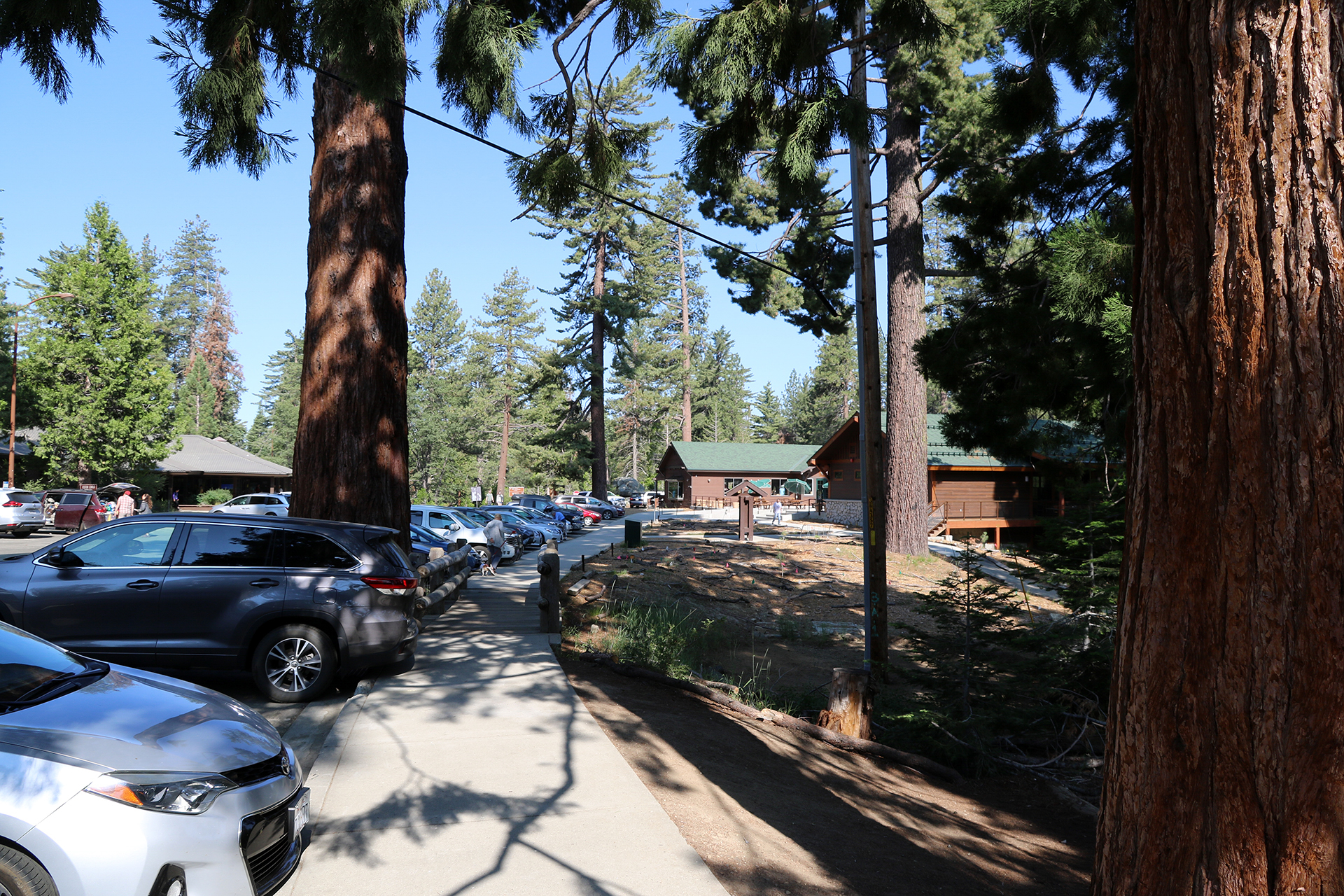 Our waitress, Liz, was fun, and she rightly guessed that we were a couple. It’s always interesting to see where in the Parks we are presumed to be together and where we are perceived as just friends. Alaska? A couple. Arizona? Just friends.

As we finished eating, the restaurant cleared out. At first we thought it was because the morning was growing old (it was already after 10), but Liz informed us that people were getting ready to watch the parade.

A Fourth of July parade in a National Park? Neat! 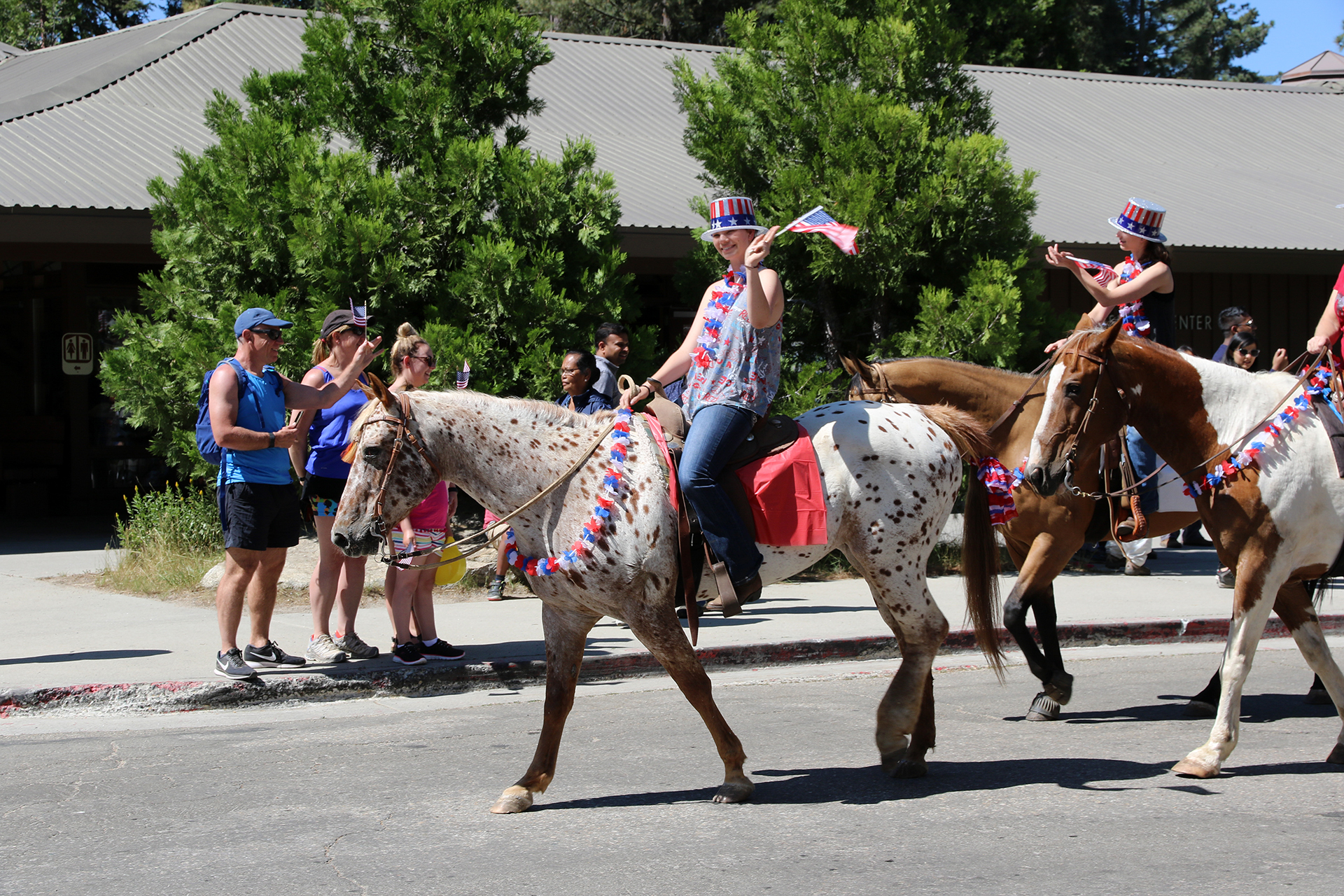 In addition to celebrating the nation’s birthday, the parade also celebrated the 100th anniversary of Wilsonia, a tiny village inholding within the Park that was around the corner from Grant Grove Village. Mostly Wilsonia (named in honor of Woodrow Wilson) was comprised of seasonal vacation cabins, but according to the 2010 census, there are five permanent residents. 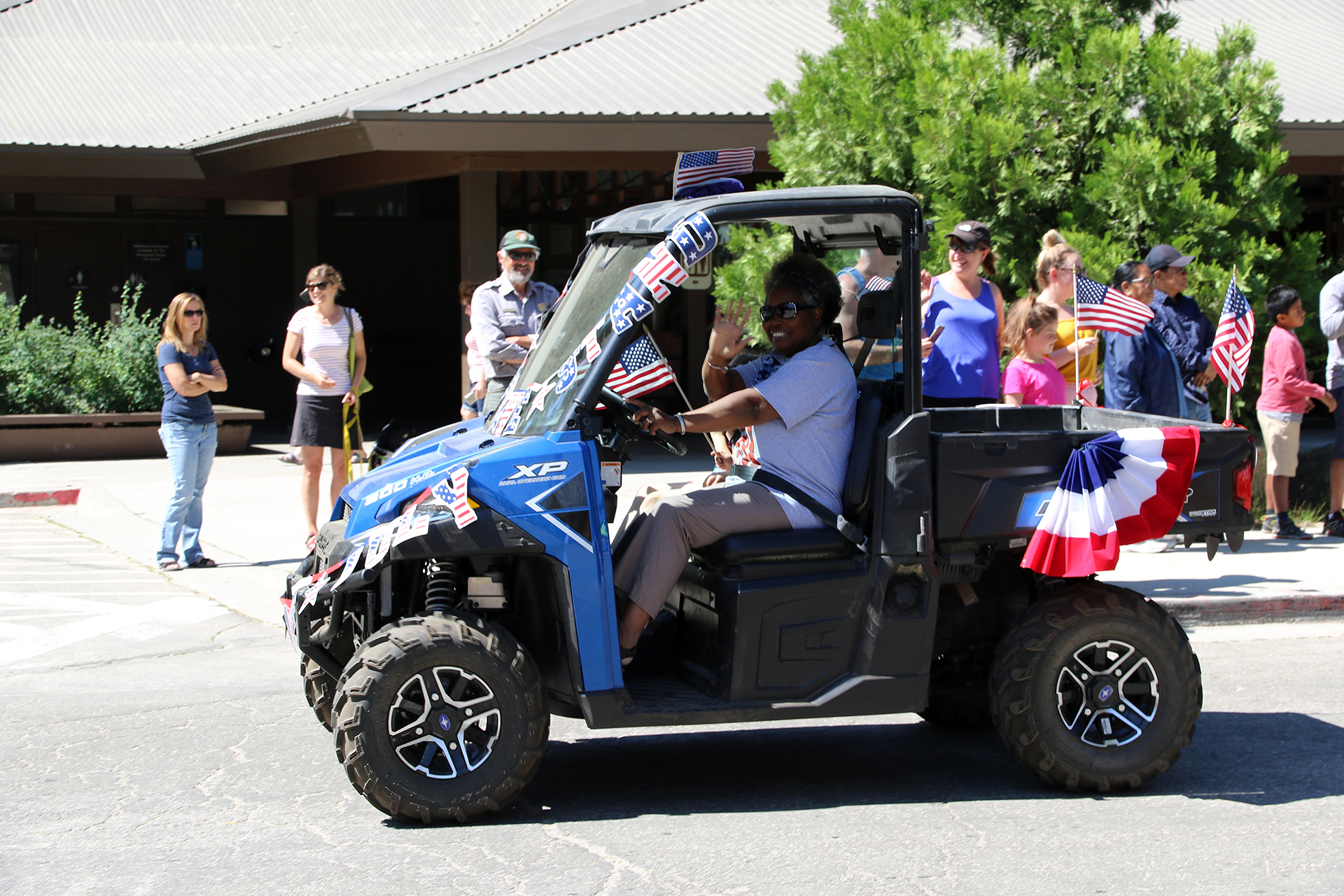 After the parade, we checked out the visitor center before getting back in the car and beginning the 32-mile drive down Generals Highway to Kings Canyon proper. Angela had warned me that the road into Kings Canyon was nerve-wracking, so I was not particularly looking forward to it.

It started out easily enough descending through Sequoia National Forest at a steep grade, but surrounded by trees. But then, after the junction to Hume Lake, the road emerged from the forest onto a ridge. Over the next twelve winding, hair-raising miles, the road lost most of the 2,000-feet elevation difference between Grant Grove and the floor of Kings Canyon.

It was gorgeous and terrifying. That said, Sean dozed through some of the drive, which I think was a vote of confidence in my driving that I did not myself share.

Once we were down in the canyon for the final stretch along the Kings River before the Park boundary, I stopped clutching the steering wheel quite so tightly. (This did not bode well for the prospect of Going to the Sun Road when we visited Glacier National Park a month later.) 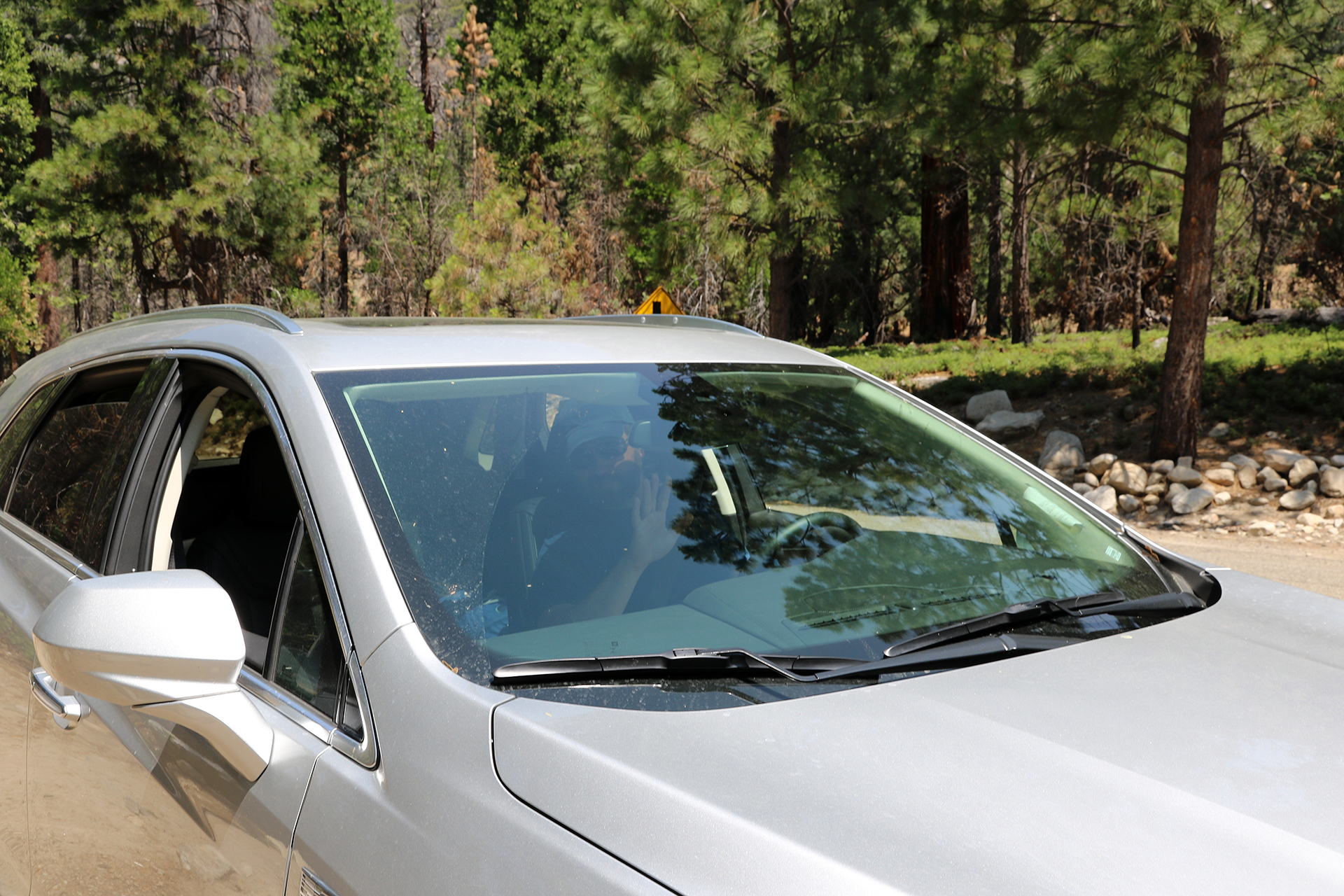 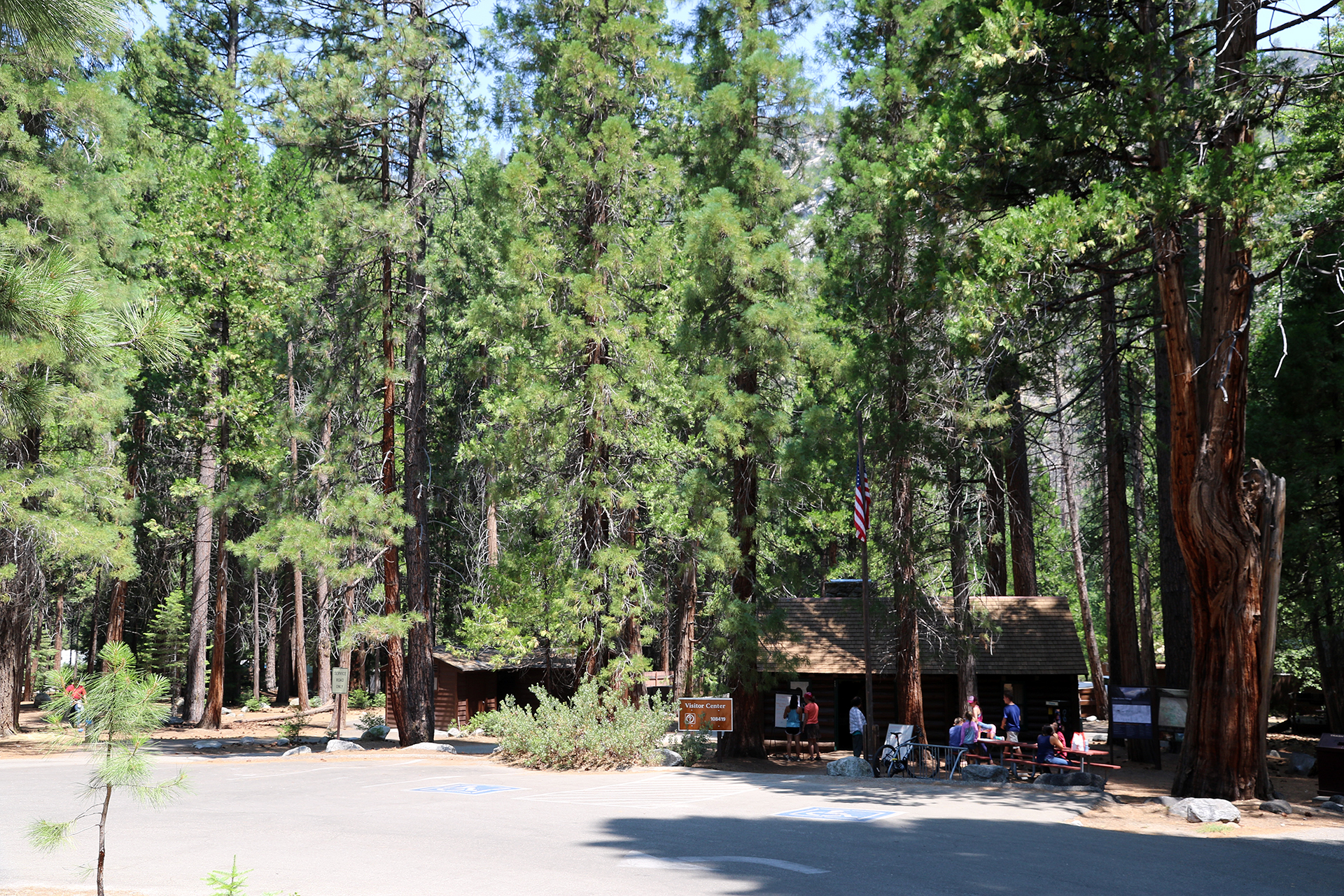 Back in the park, we stopped at Cedar Grove Visitor Center to stamp our passports.

Then we drove east to the large parking area at Roads End. Here is where the great roadless wilderness of Kings Canyon began, and we were ready to hike at least a small fraction of it.