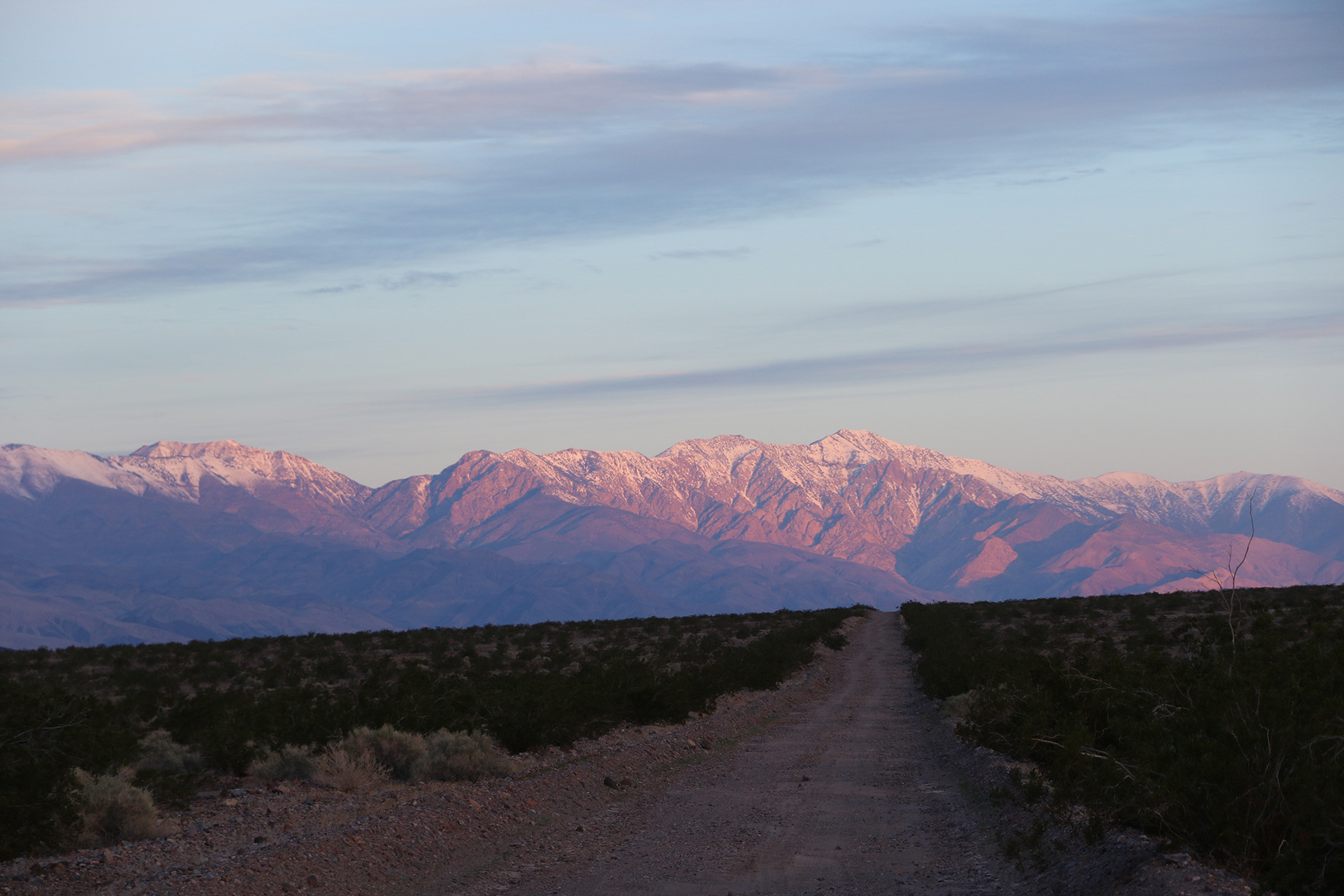 By 5pm on Sunday, February 26, Sean, Andrew, and I were back in the Jeep and driving south through the northern part of Death Valley. The task at hand: finding a place to rest our heads for the night. The immensity of Death Valley was more apparent for us on this drive than it had been throughout the rest of our time in the Park. It was fifty-seven miles from Ubehebe Crater to the Park Headquarters at Furnace Creek. And our intention was to continue south well beyond Furnace Creek.

Shadows were quickly flooding the western side of the valley north of Stovepipe Wells.

To the east, the Grapevines were lit up by the setting sun.

We stopped for gas at Furnace Creek. Suddenly, in this most developed spot in the Park, we had cell service again. We all did a bit of social media and checked the news. It was the evening of the Academy Awards, and Sean and I agreed that although we thought La La Land would certainly win, we thought Moonlight deserved it. Then we continued on and out of contact with the outside world.

We continued south in the dusky valley for another fifty miles past Furnace Creek. In the half light, we got our first glimpse of Badwater Basin, but we needed to adhere to our task of finding a campsite.

Camping is prohibited on the east side of the valley between Stovepipe Wells and Ashford Mine. Unfortunately, the recent rains had damaged West Road, which provided access to Jeep roads into the foothills of the Panamints on the west side of the valley, where camping was allowed. So we were forced farther south to Harry Wade Road.

Some two hours after departing Ubehebe Crater, we reached unpaved Harry Wade Road, which continued south into the southernmost reaches of Death Valley while Badwater Road turned east and left the valley.

Right at the start of the road, there was a no camping sign, but we assumed that the sign meant that there was no camping there at the junction. The map that the Ranger had given us the previous afternoon clearly indicated that camping was allowed along Harry Wade Road. The trick was finding a good spot.

We started down the road in thick darkness. The headlights shone on two-foot high ridges built up on each side of the road to prevent erosion. This limited the spots where we could easily pull off the road. We rolled down the windows and began sweeping the creosote scrub on either side of the road with our flashlights, looking for a good spot to set up camp. In this way, we discovered a family of Kangaroo Rats leaping about between the shrubs. The light of the flashlights caught their glowing eyes.

I was really excited. I’d wanted to see a Kangaroo Rat since I was a kid, but I assumed we wouldn’t see one on this trip since they are nocturnal. The only image I managed to get of one of the Kangaroo Rats was just a sandy-colored blur. But the image above is the clearest image I captured of their habitat.

About a mile and a half beyond Badwater Road, we finally reached some viable places to camp, and we selected a relatively open space where the creosote had grown quite tall.  All told, we’d traveled about one-hundred and ten miles from Ubehebe Crater to our camp. We saw clear evidence that others had camped there even before we noticed an old cat hole with some toilet paper coming out of it. It was entirely too near camp, and the previous occupants should not have buried the toilet paper. Oh well. We tidied it up and selected places for our tents.

Despite the previous occupants, the site was quite pleasant, and so was the evening. The temperature was in the sixties, and although there was a little cloud cover, there were still plenty of stars. 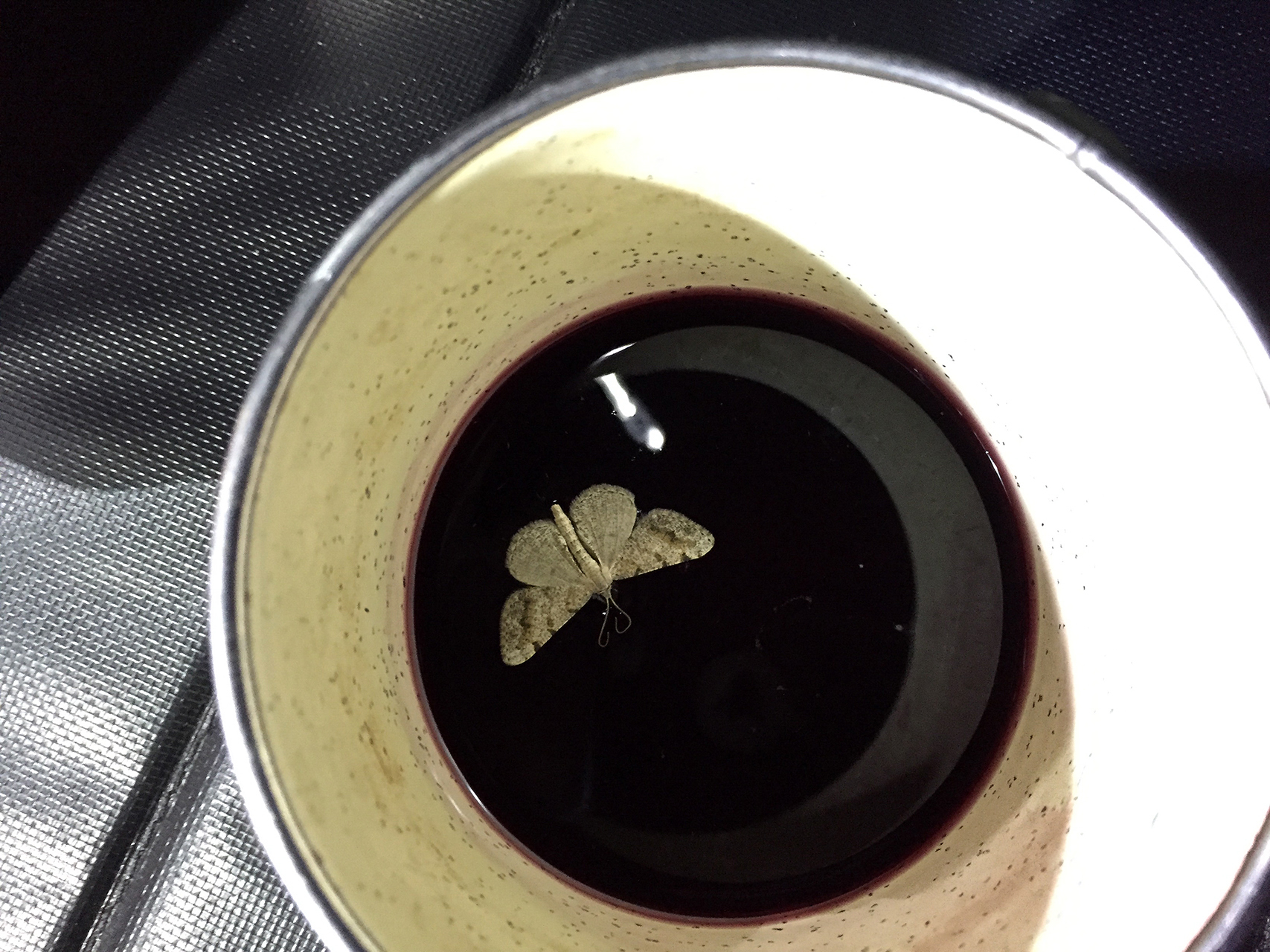 After supper, we poured cups of wine and later bourbon and set up a game of Blokus on the top of the cooler. 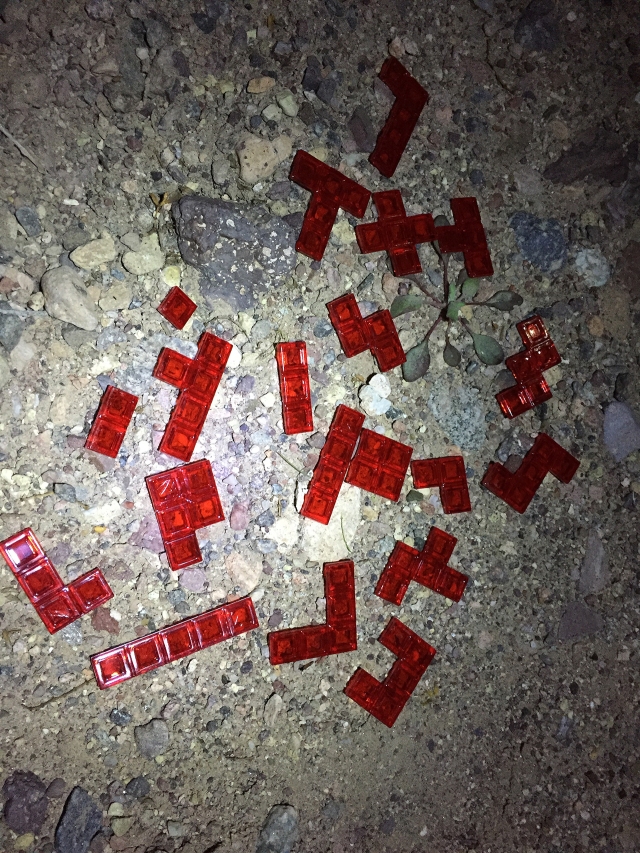 Blokus pieces on the floor of Death Valley

Here on the floor of Death Valley, right around sea level, the temperature on that February night was so much nicer than it had been the previous night at 4,000 feet up in the Cottonwoods. Overnight, it only dropped to sixty degrees. 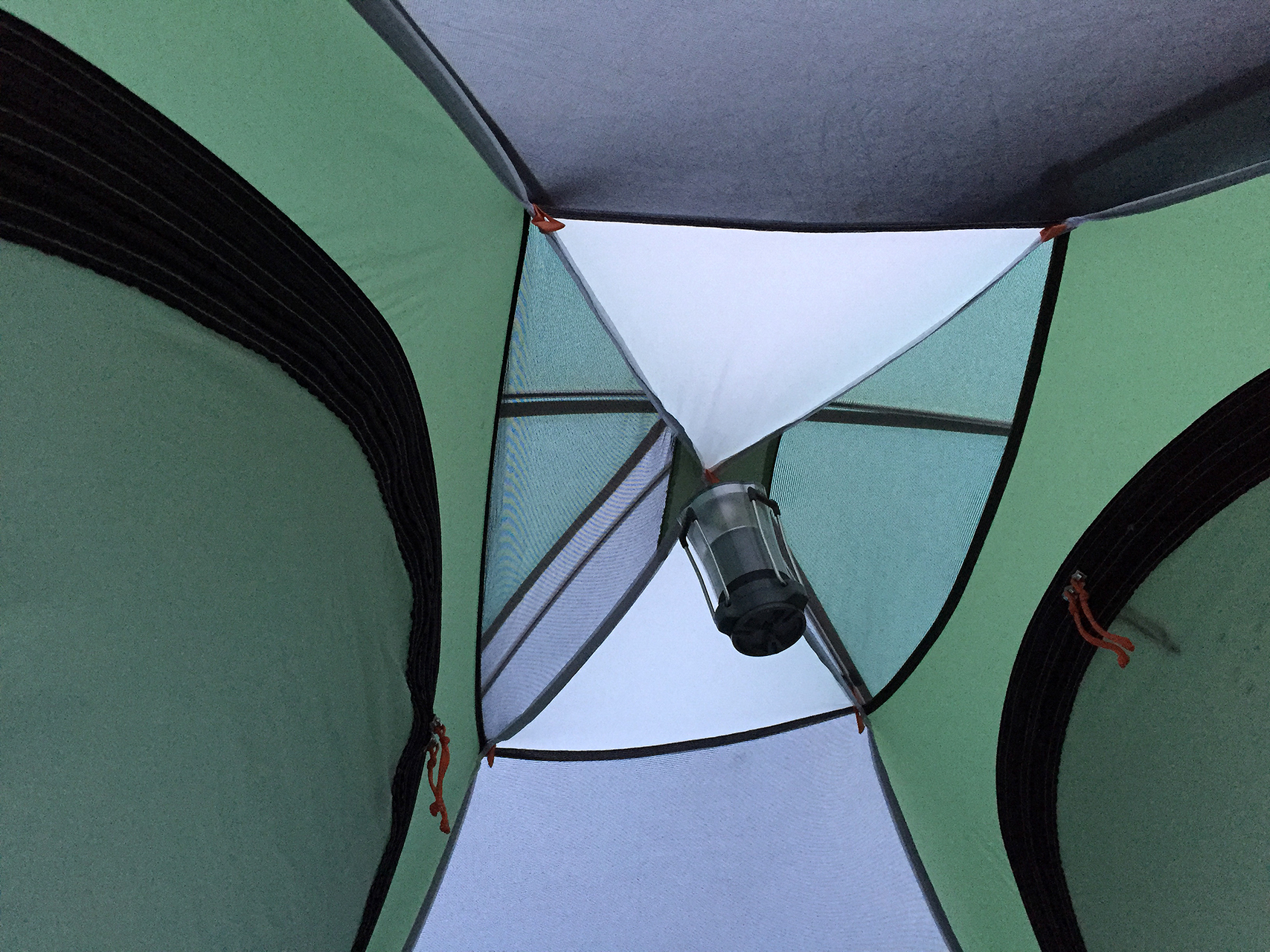 Next morning, Monday, February 27, we climbed out of our tents around 6:15 to have a look around at the scenery that had been lost in thick darkness the night before.

We were camped in a very broad wash extending from the Black Mountains to the Amargosa River in the center of Death Valley. 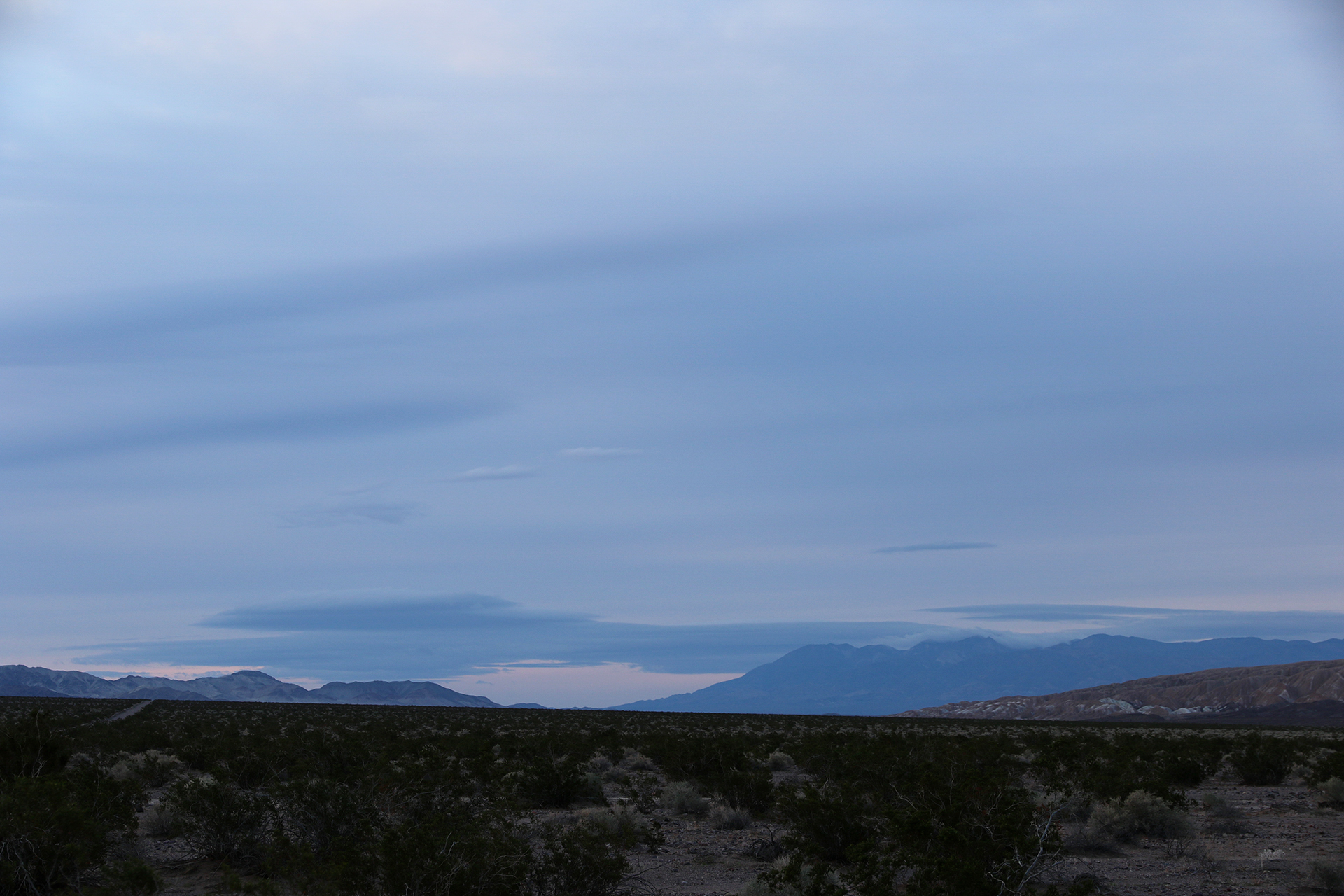 To the south, layers of clouds darkened the sky, but softly. 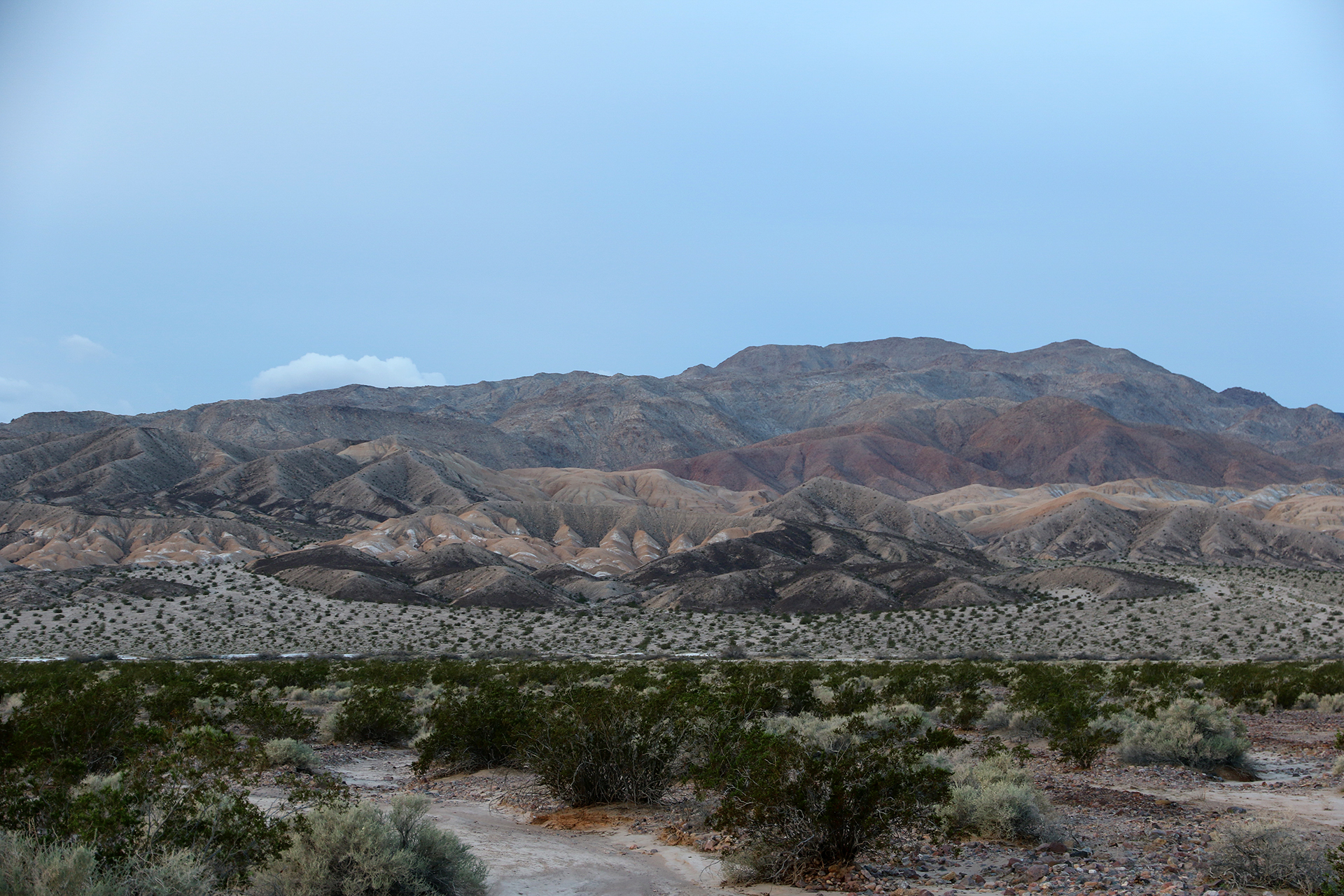 The Owlshead Mountains rose to the west. Closer, the multi-hued Confidence Hills marked the western edge of Death Valley. 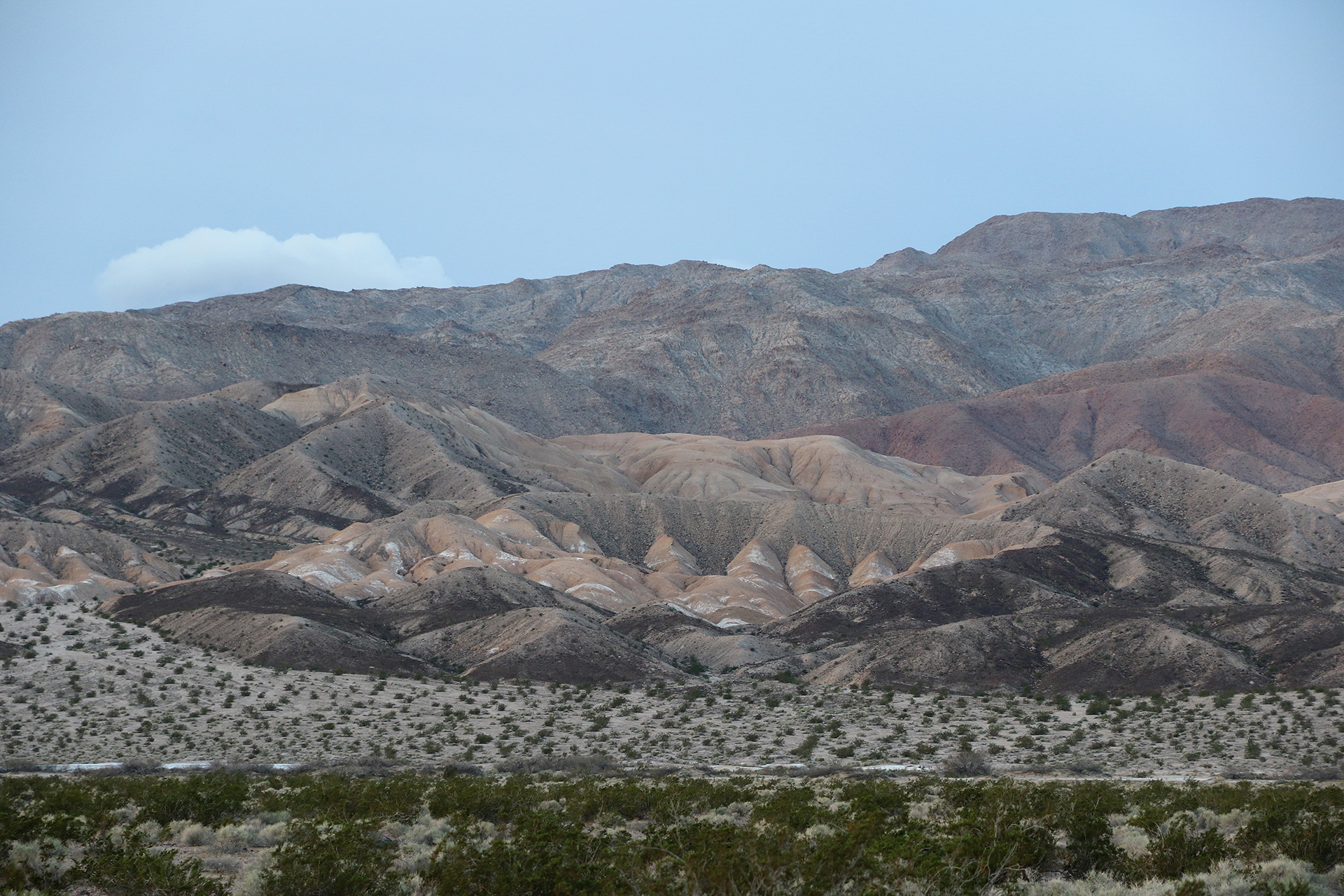 To the north, up the long stretch of the valley morning alpenglow lit up the snow-covered ridge of the Panamints.

And to the east, the Black Mountains, part of the long Amargosa Range, rose against the sunrise.

With the recent moisture, the valley and the Creosote “forest” we were in felt practically lush, particularly compared to Hidden Valley.

After breakfast, we took note of the eerie clouds drifting slowly in from the south like advancing spaceships of some sort of hostile alien race before heading out across the valley floor to the Amargosa River. We couldn’t tell if the distant rumblings we heard were thunder, a plane, or explosions from distant military installations. 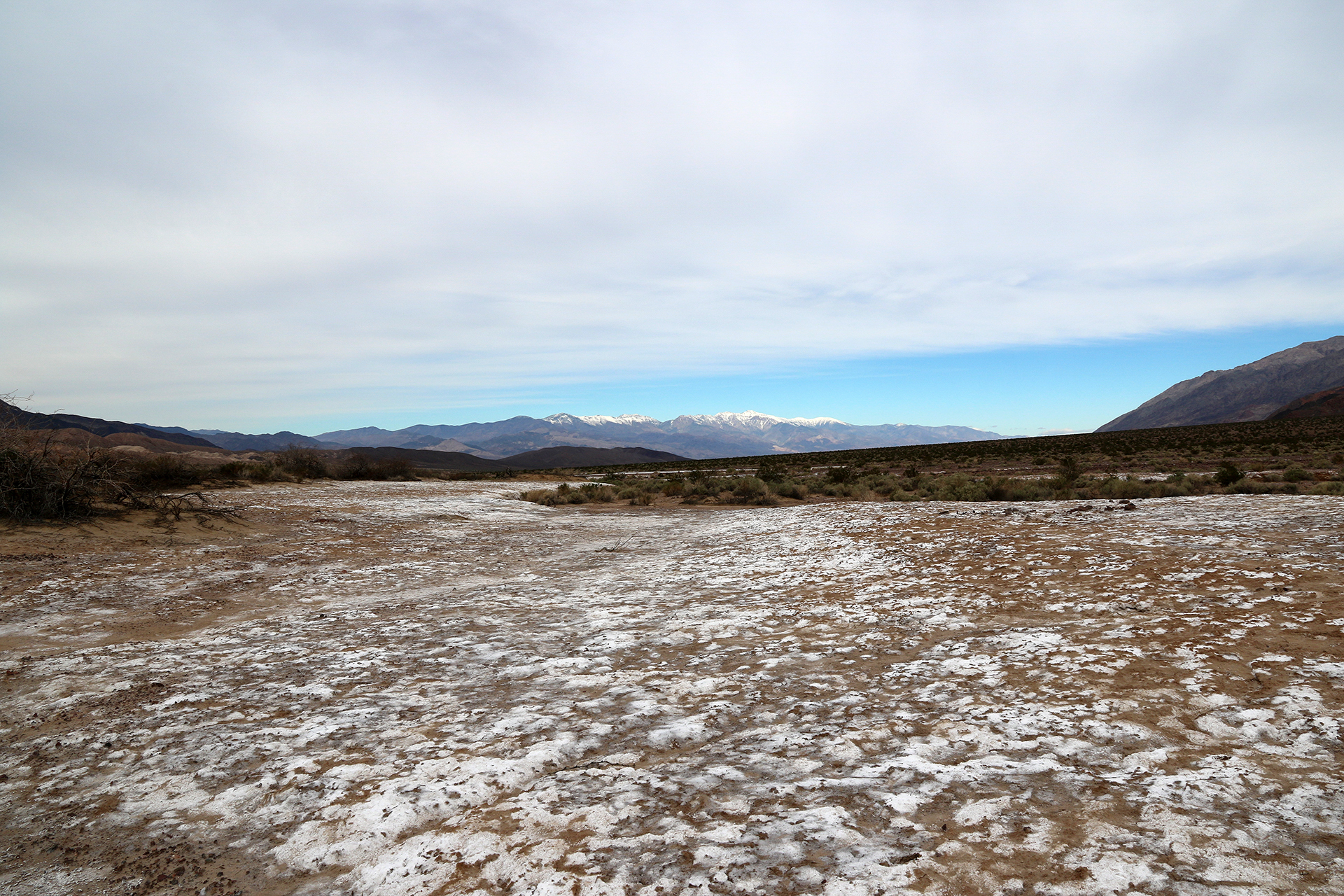 After about ten minutes of walking, we reached the broad salt deposits of the Amargosa. 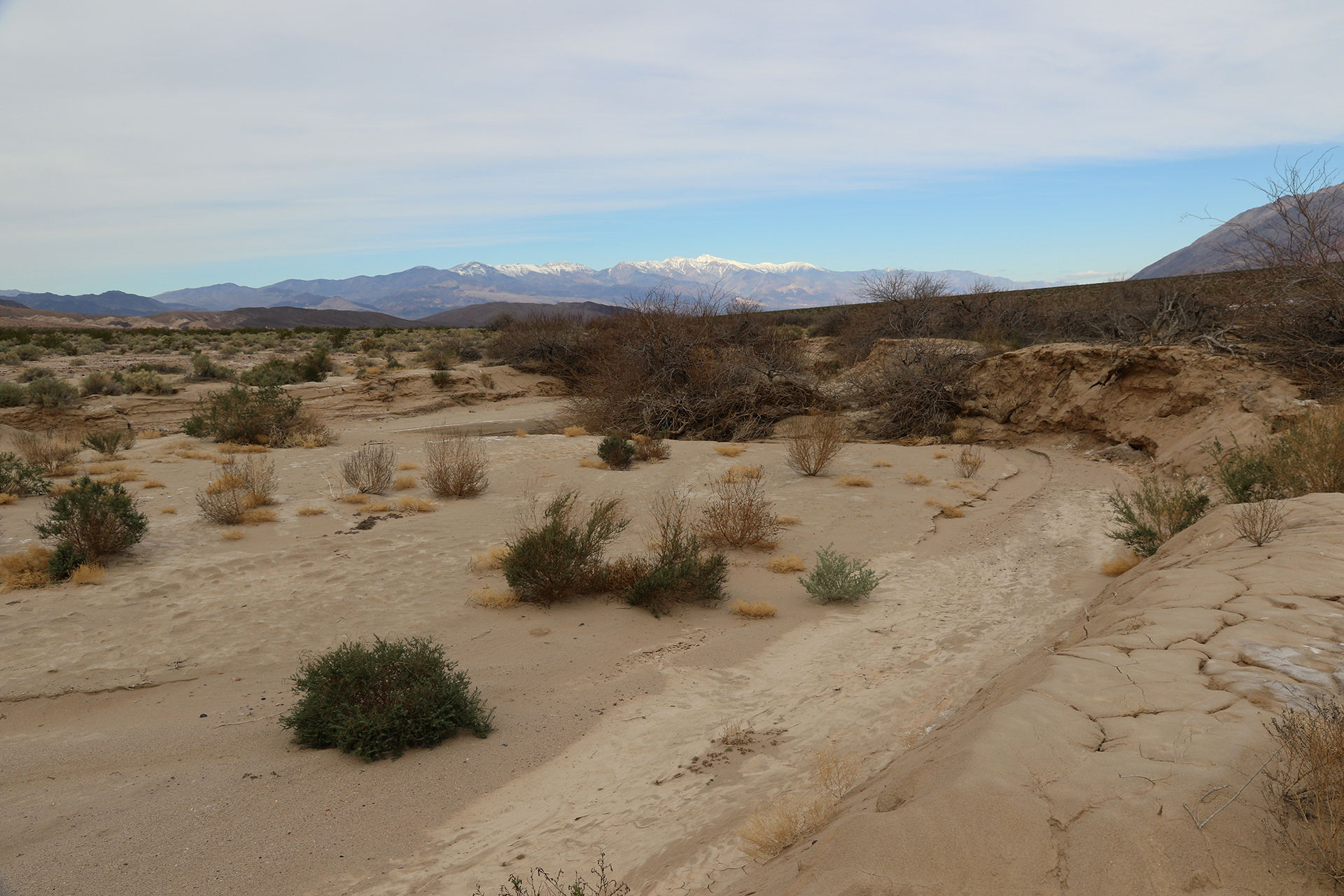 Shortly thereafter, we reached a sandy landscape sculpted by the rare times when the Amargosa was in flood. 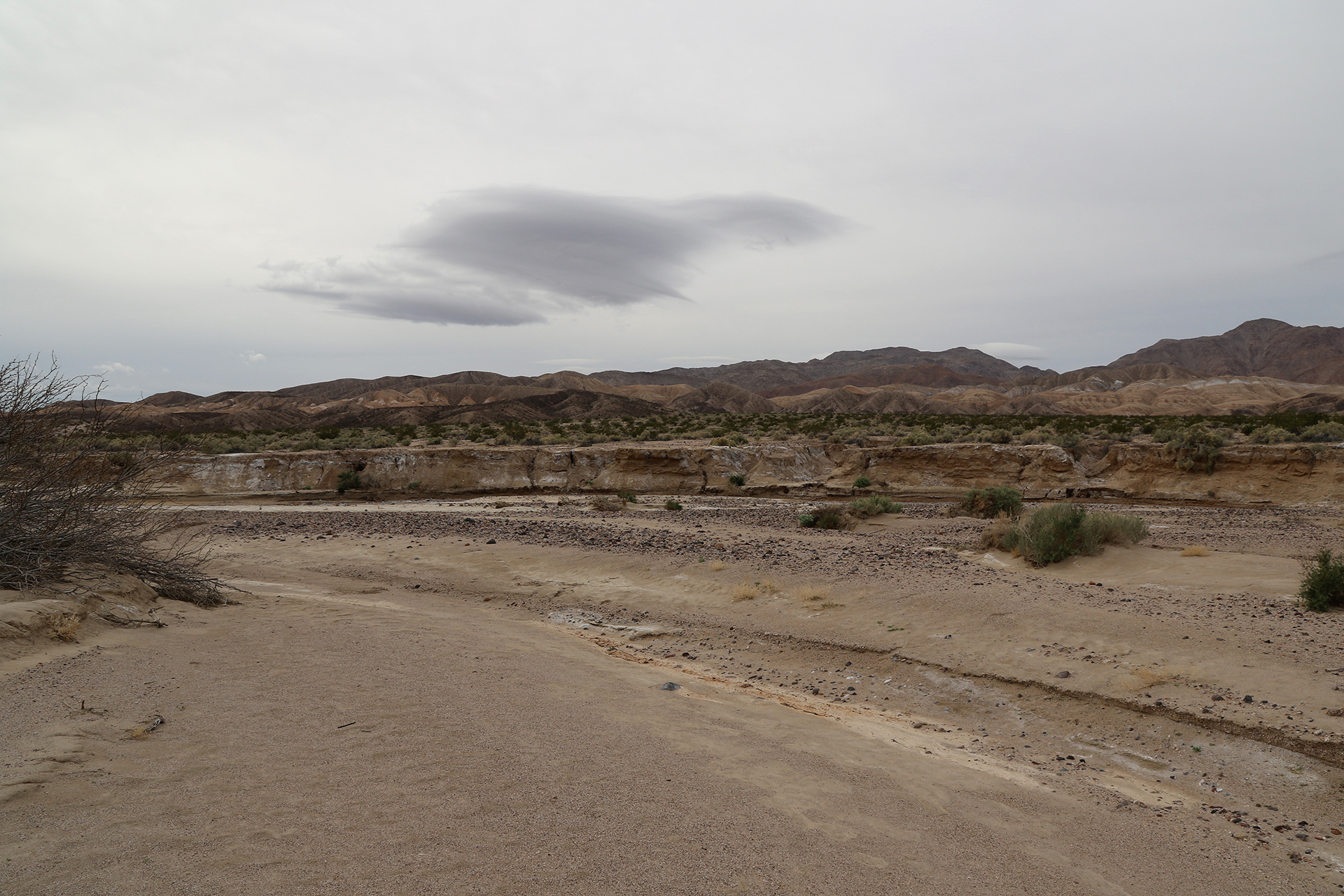 And then we came upon the Amargosa itself. The river runs for 185 miles from northwestern Nevada south through the Amargosa Valley and around the southern reaches of the Amargosa Range. There it turns north into the southern portion of Death Valley before vanishing at Badwater Basin. For the vast majority of its length it flows underground except for after heavy precipitation. On that Monday morning, we got to see the Amargosa flow in Death Valley. 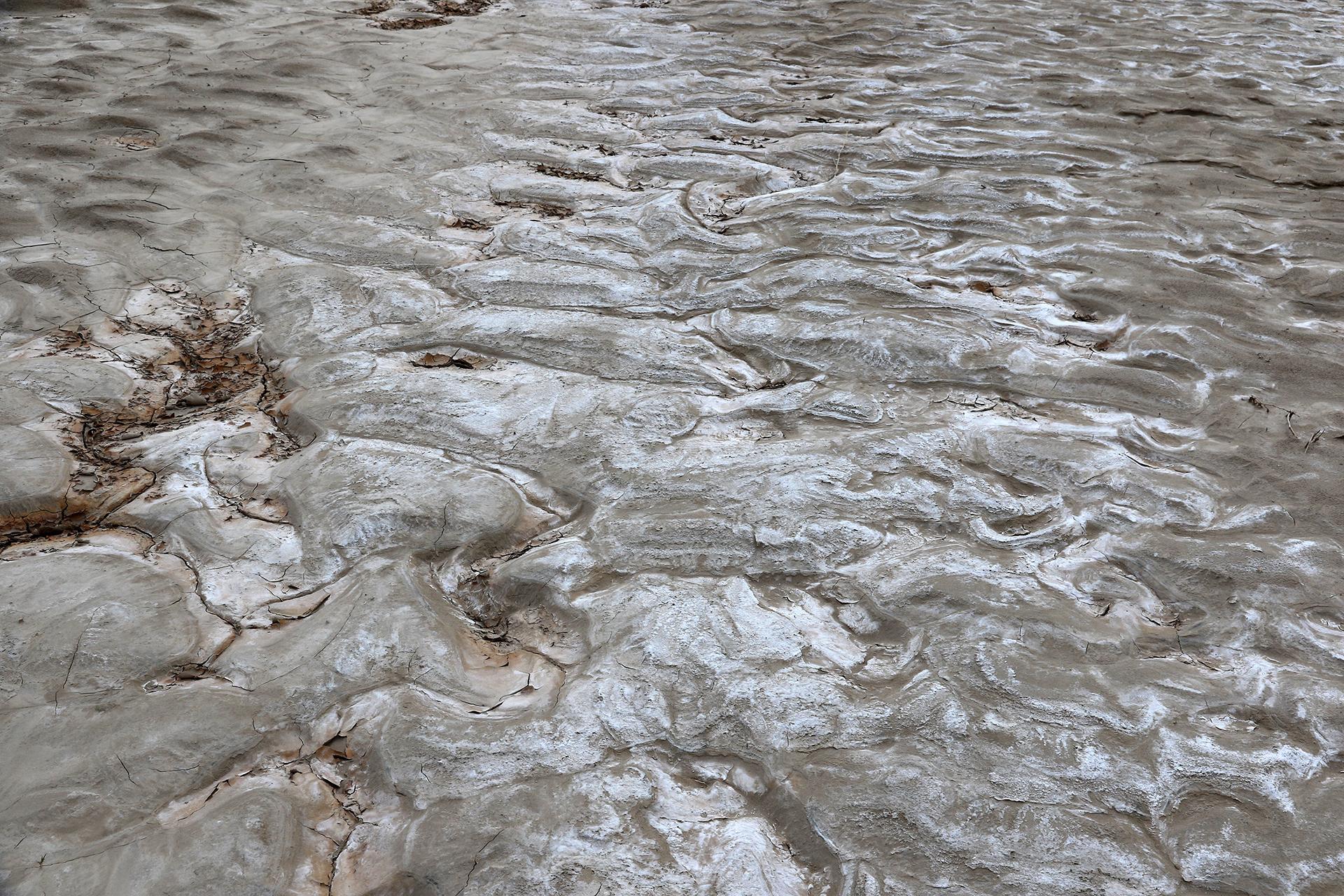 It was obvious that the river was narrowing after the recent rains. It had left a salt stain at its most recent widest swell, then a strip of moist sand as it slowly narrowed until ultimately it would vanish again days or weeks in the future. 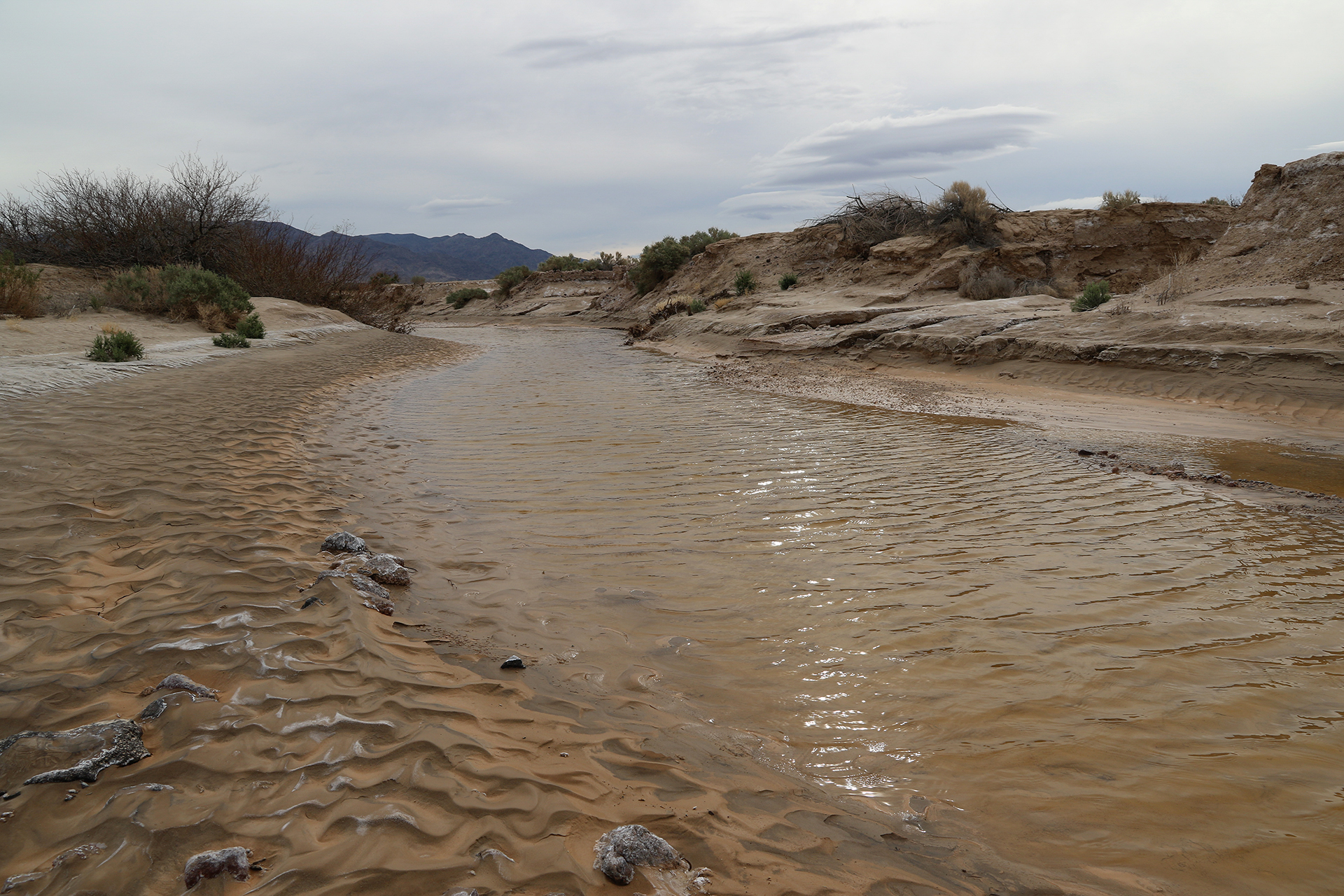 But for now it was a flowing river, which had clearly attracted animal activity overnight. This was made most obvious by the fresh Coyote tracks we discovered.

The western bank was a high ridge, so we stayed on the eastern bank. Ironically, the Amargosa reminded me of the braided rivers of Denali National Park. At times, clearly, the Amargosa would flow at various parts of its broad wash depending on the water’s preference, just as the great braided rivers of the Alaska Range flowed at vastly different rates depending on the meltwater of glaciers. 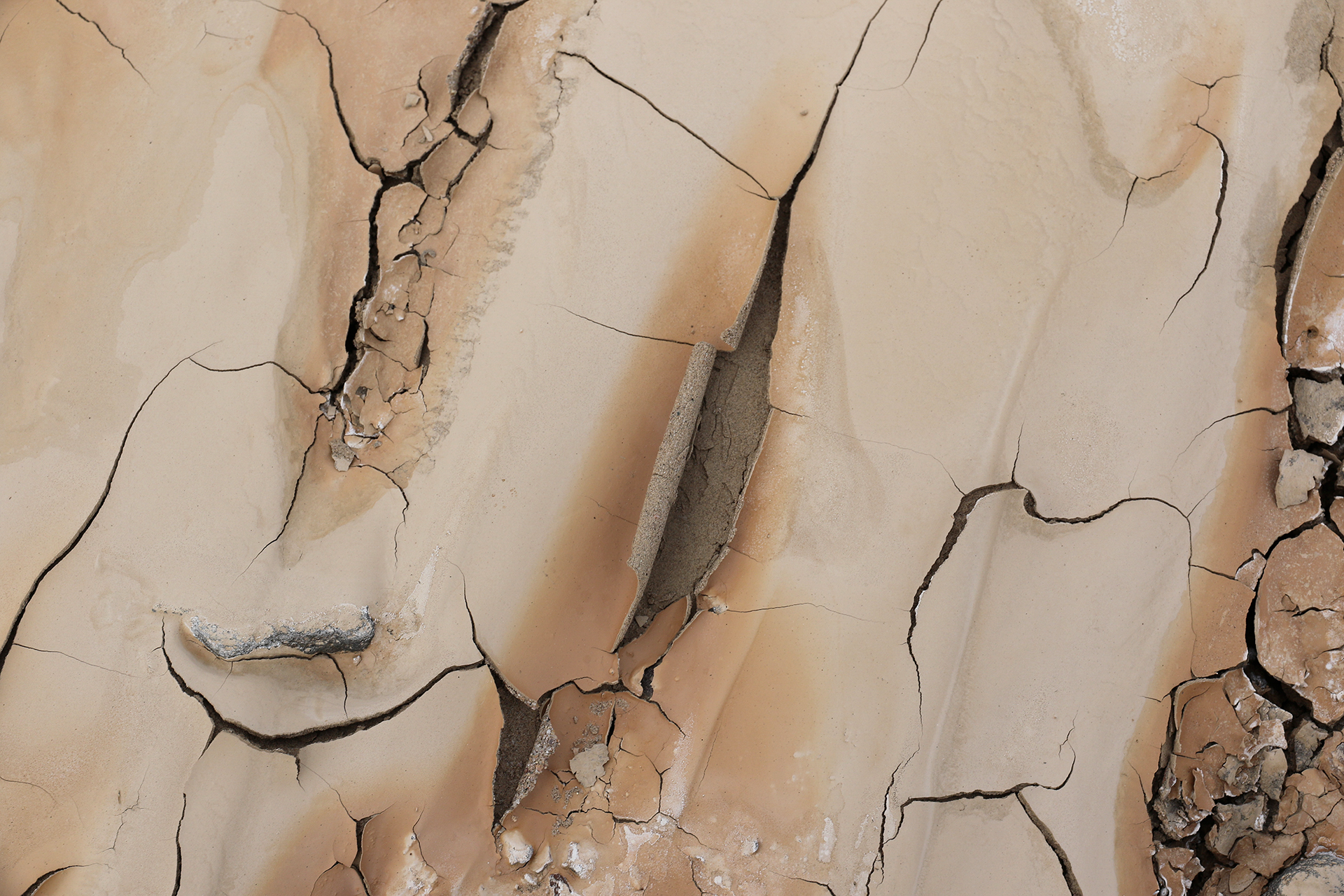 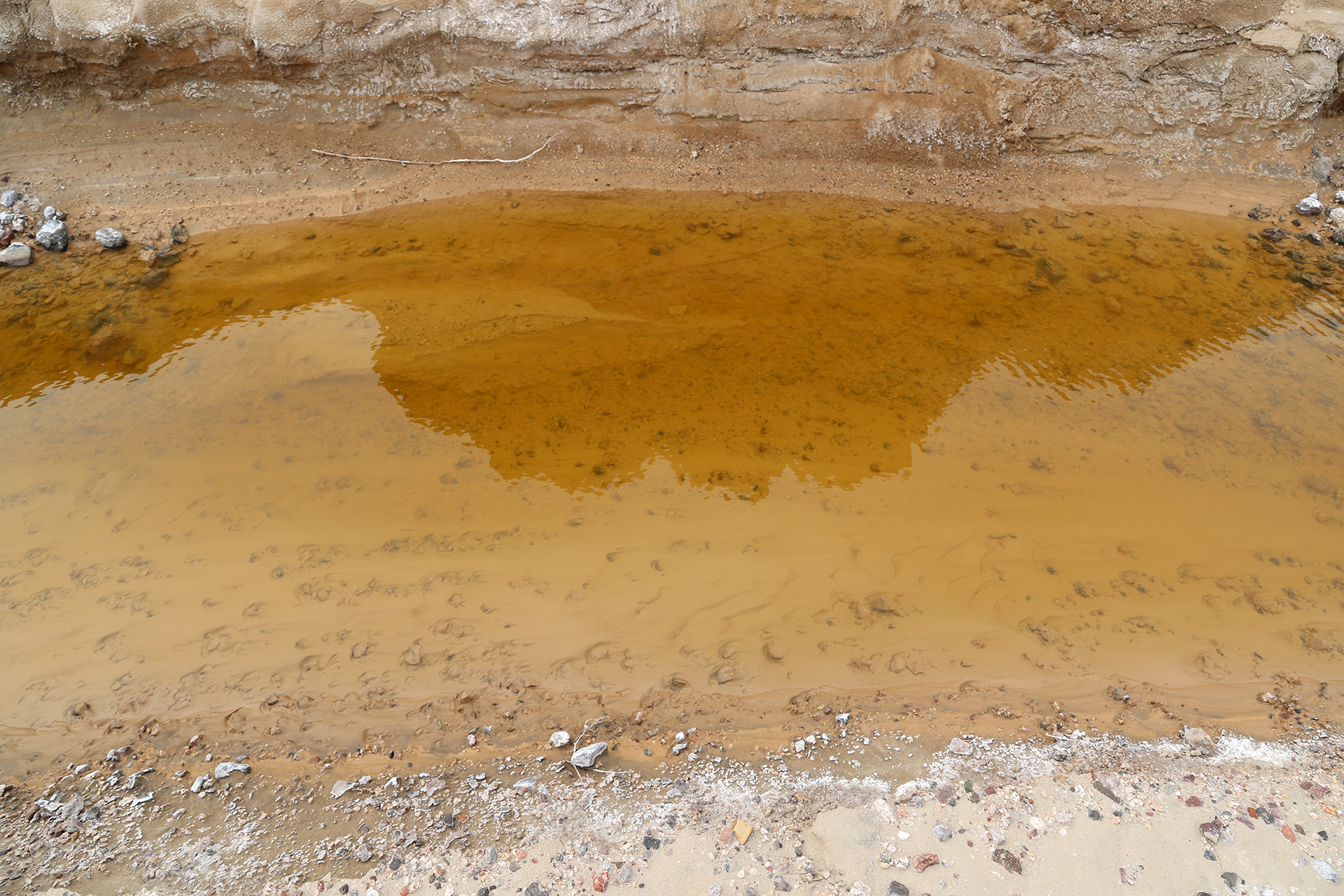 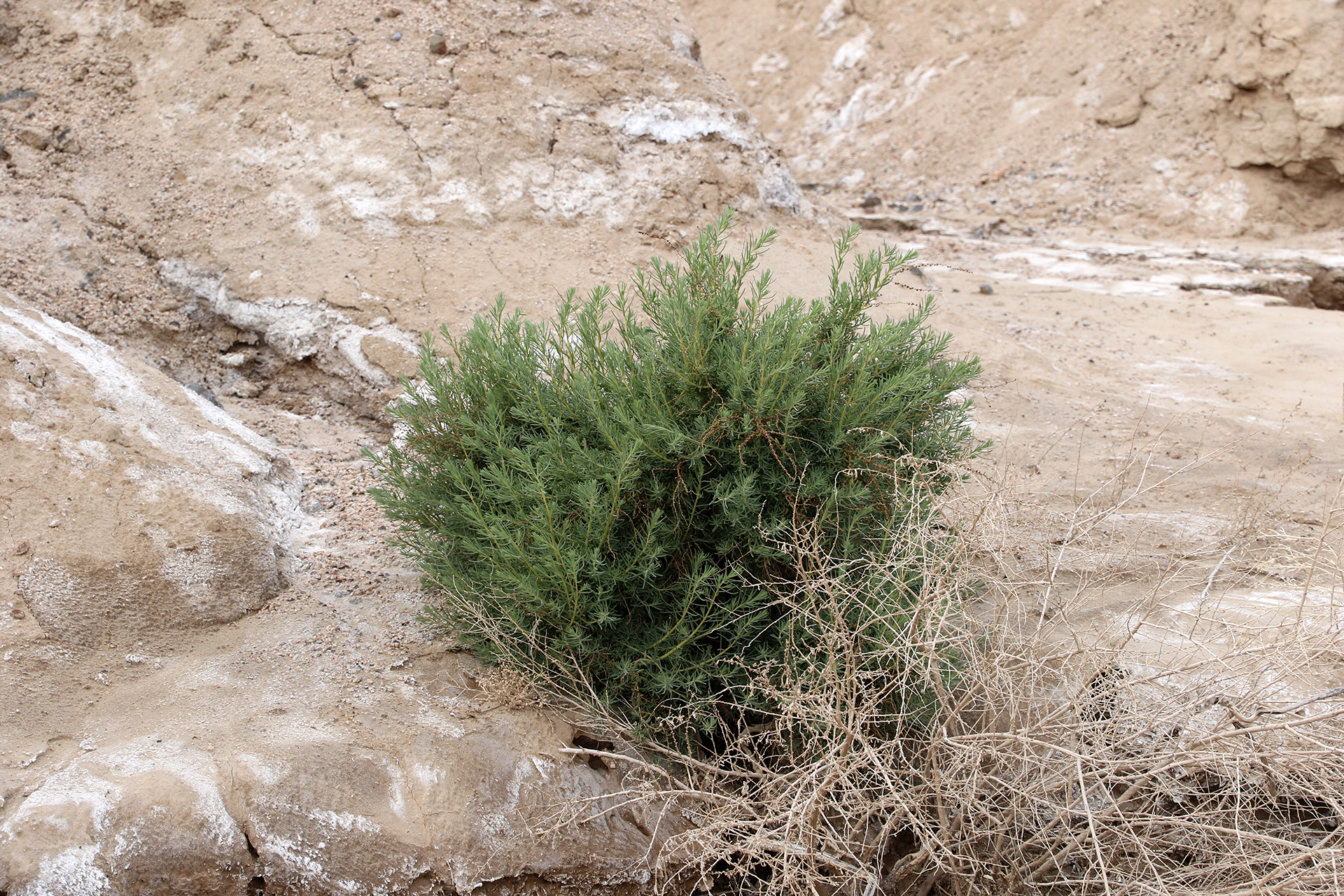 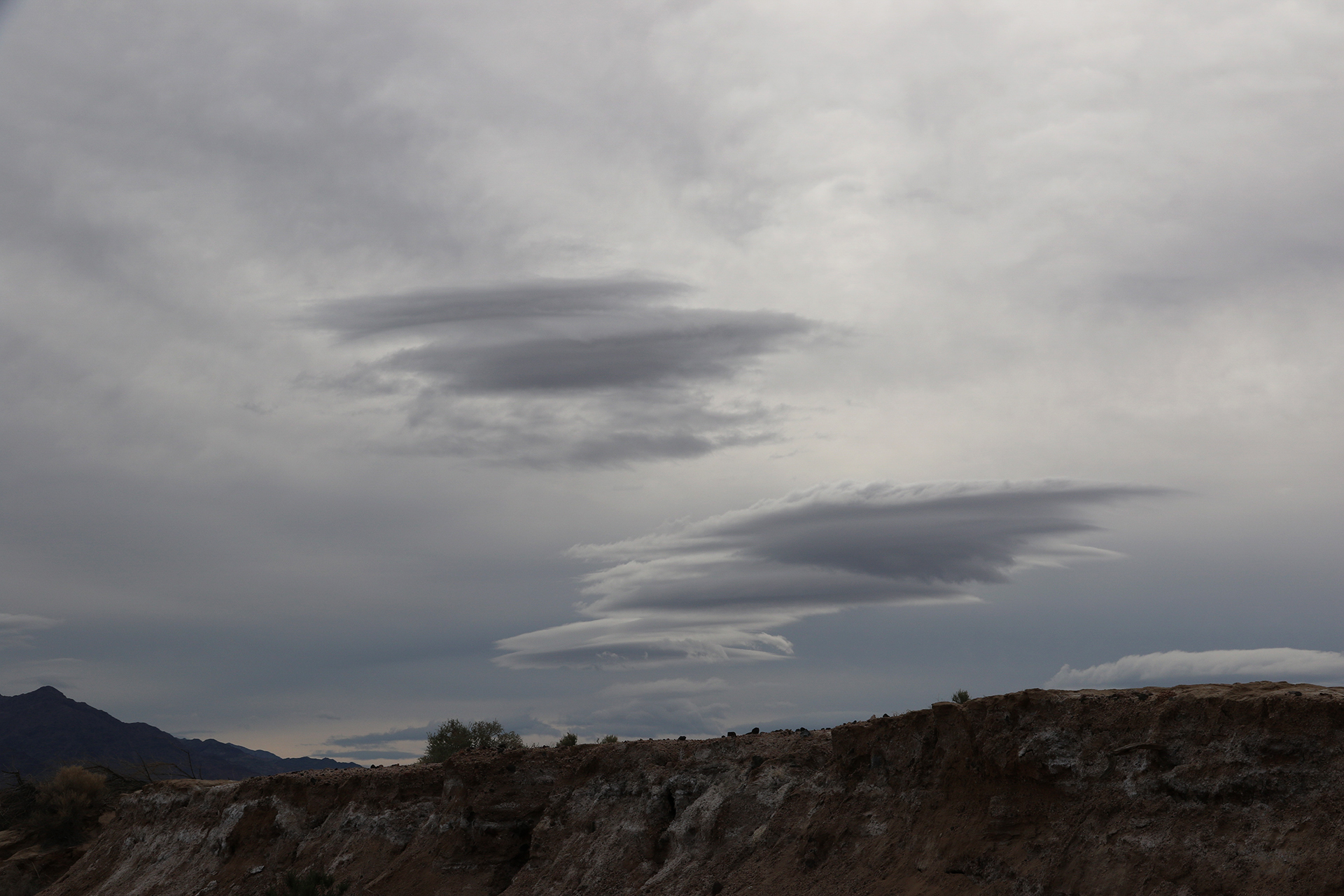 We turned around and headed back to camp. On the way down, we’d noted roughly where our campsite was compared to the lines of the washes coming down from the Black Mountains. We weren’t particularly worried about getting lost because we’d hit Harry Wade Road no matter what, but even a short cross-country walk in Death Valley could tempt fate with the place’s vastness. 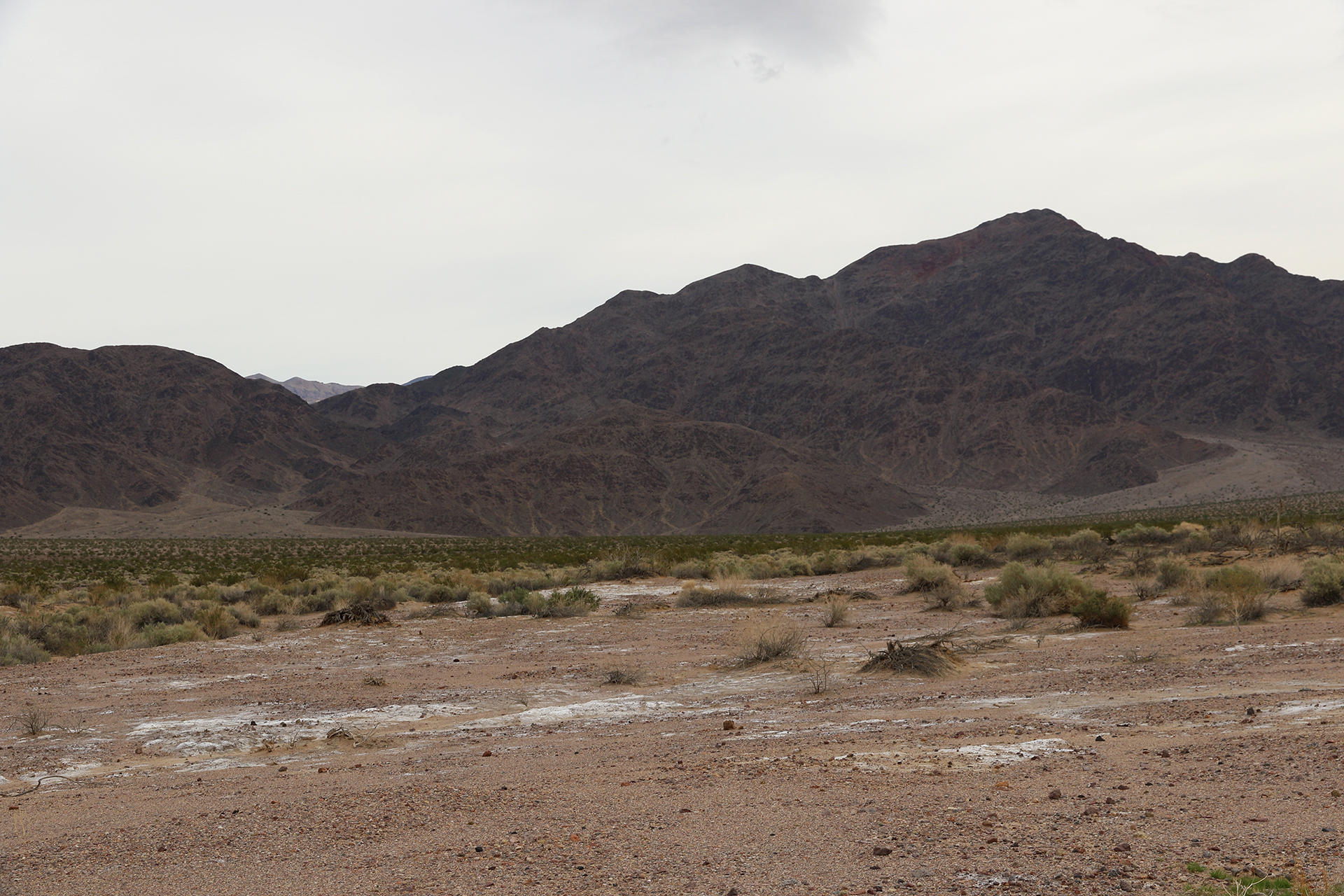 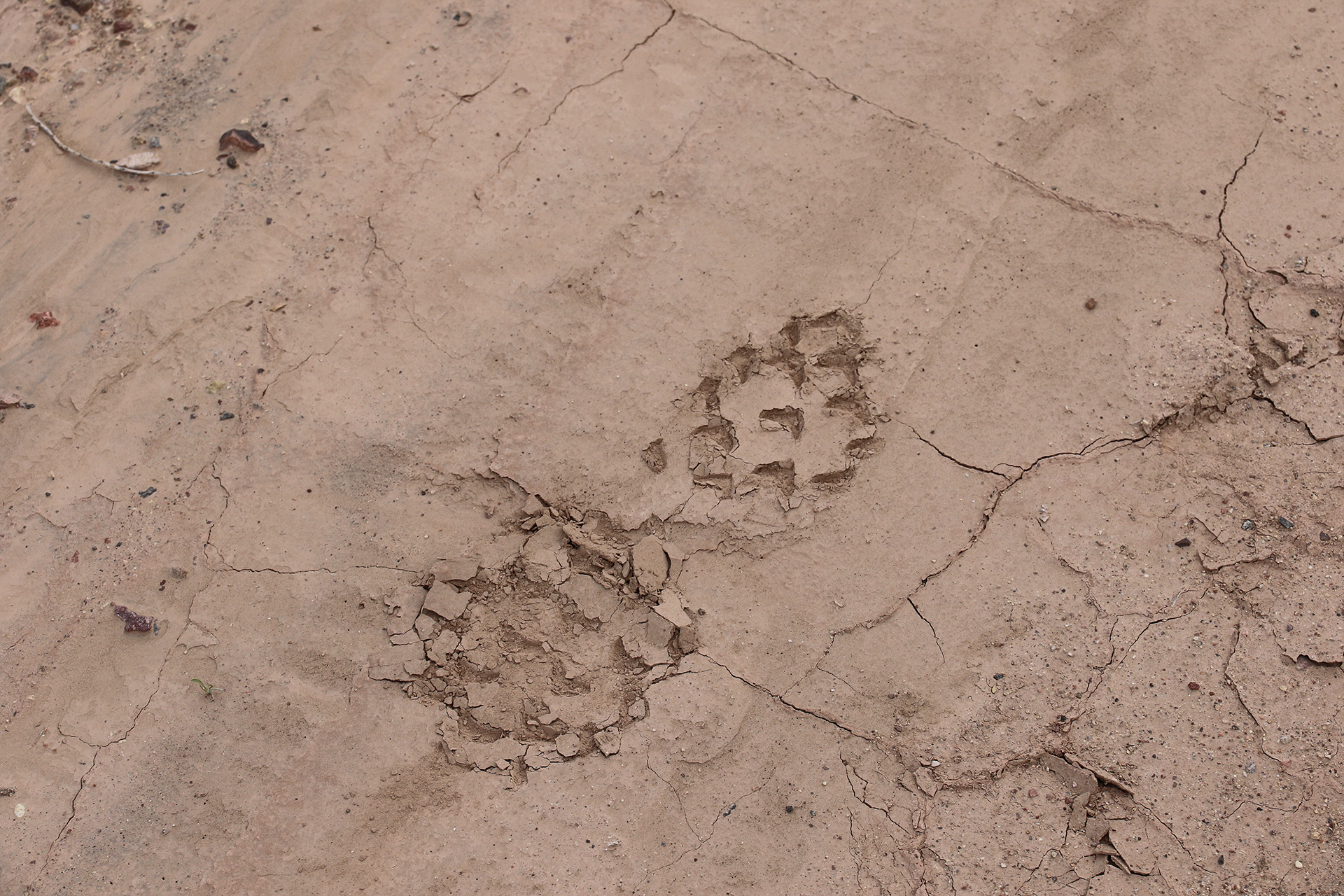 We also had the distinctive tread of Andrew’s hiking shoe to guide us back.

The alien invasion was getting closer. 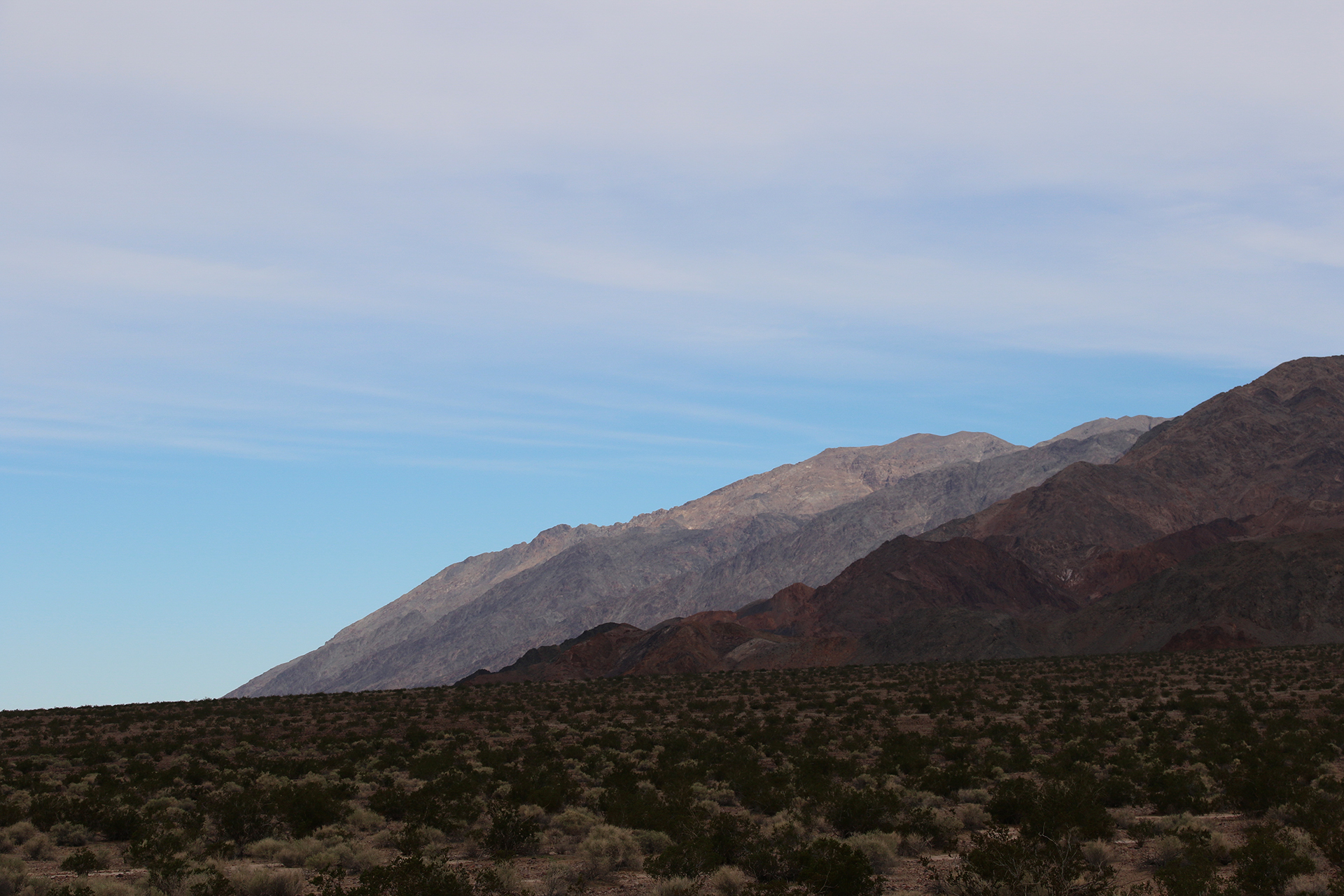 To the north, it was brighter, beckoning us to a day of canyoneering adventures.

Soon we were within sight of camp. When we reached it, we made quick work of striking camp and loading the Jeep.

2 thoughts on “Death Valley National Park: Yea, Though I Camp in the Valley of the Shadow of Death, I Will Fear No Kangaroo Rats”