Biscayne National Park was established in 1980 and protects almost 173,000 acres of the northernmost Florida Keys, coastal Florida south of Miami, and the expanse of Biscayne Bay. It is in good company with Dry Tortugas, Glacier Bay, American Samoa, and Channel Islands as a National Park whose primary function is to protect nautical resources and habitat. Biscayne Bay was originally proposed for protection in the 1940s as part of Everglades National Park, but it was ultimately eliminated from that Park’s boundaries. The mainland areas and keys of Biscayne Bay remained largely undeveloped until the 1960s when proposals emerged to extend the hyper-development of Miami Beach to the Biscayne keys. A proposal to dredge the bay to create a deep-sea port on the mainland activated intense grassroots opposition. In 1968, that opposition led to the establishment by Congress of Biscayne National Monument, which was expanded and upgraded in 1980 to National Park status.

For several years before our visit on November 19, 2016, Biscayne National Park had lacked an official concessionaire. For decades, official partners had offered glass-bottomed boat tours and other activities for exploring the Park. By last November, limited tours were again being offered, but not on a day that made sense for our trip. Lacking a private boat, let alone one in Florida, we focused our day at Biscayne on kayaking.

Our reservation with Danny from Nec-Flo Paddlesports was for 9am, so we were up and out the door by 7:45 to make the drive up and off of Key Largo to Homestead, Florida, and then to the Dante Fascell Visitor Center at Convoy Point.

On the way, we passed a huge Nascar stadium and the RVs camped out waiting for the day’s race. 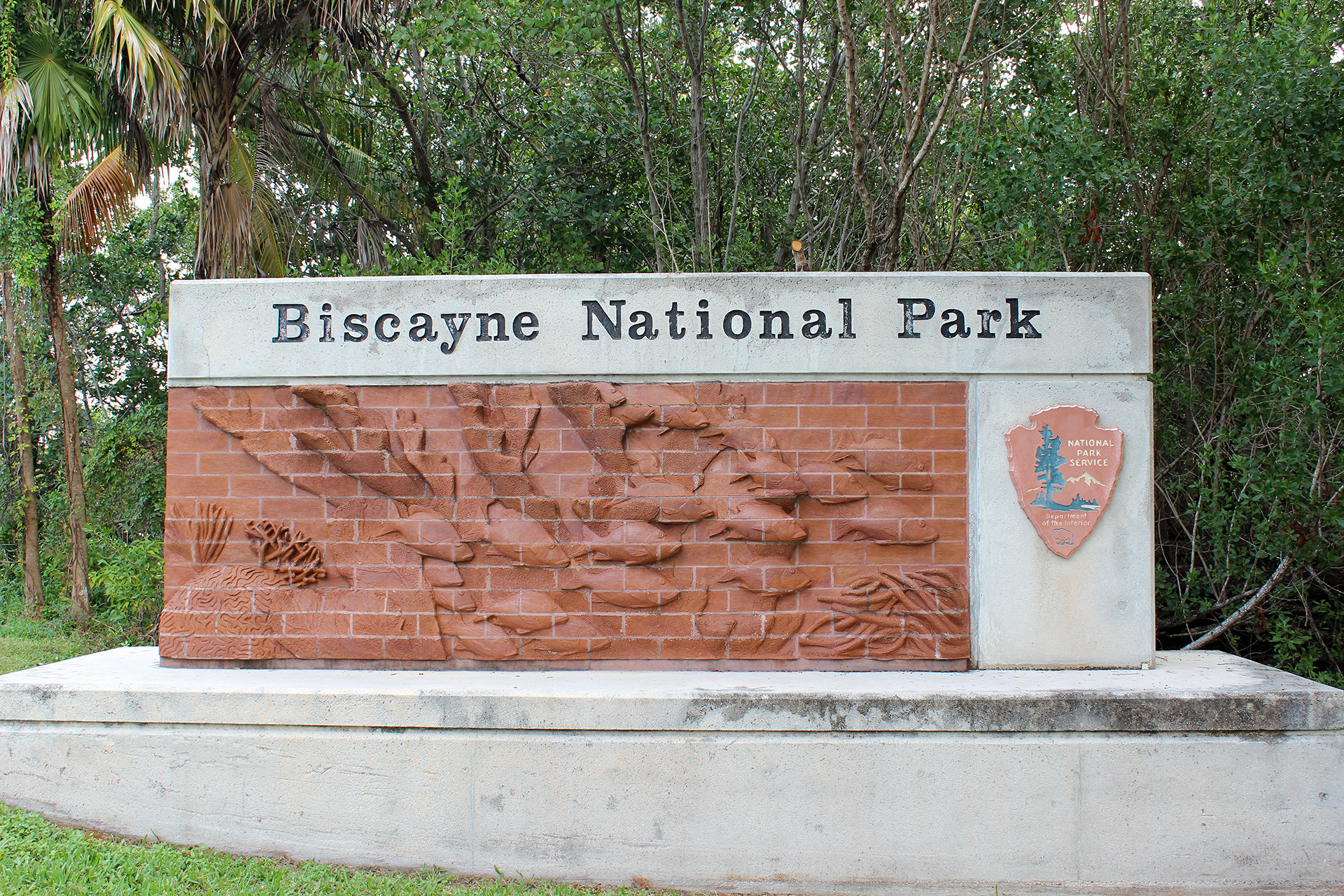 When we arrived, Danny was just setting up. The Visitor Center wasn’t yet open, so we explored the grounds around Convoy Point. Convoy Point, owned by the National Park Service as the mainland base of Biscayne National Park, is separated by a canal from Homestead Bayfront Park to the south, which is owned by Miami-Dade County. In the mid-twentieth century, they were all one park, although segregated with the southern part hosting the beach for white people and the northern part, now part of the National Park, hosting the beach for African Americans. 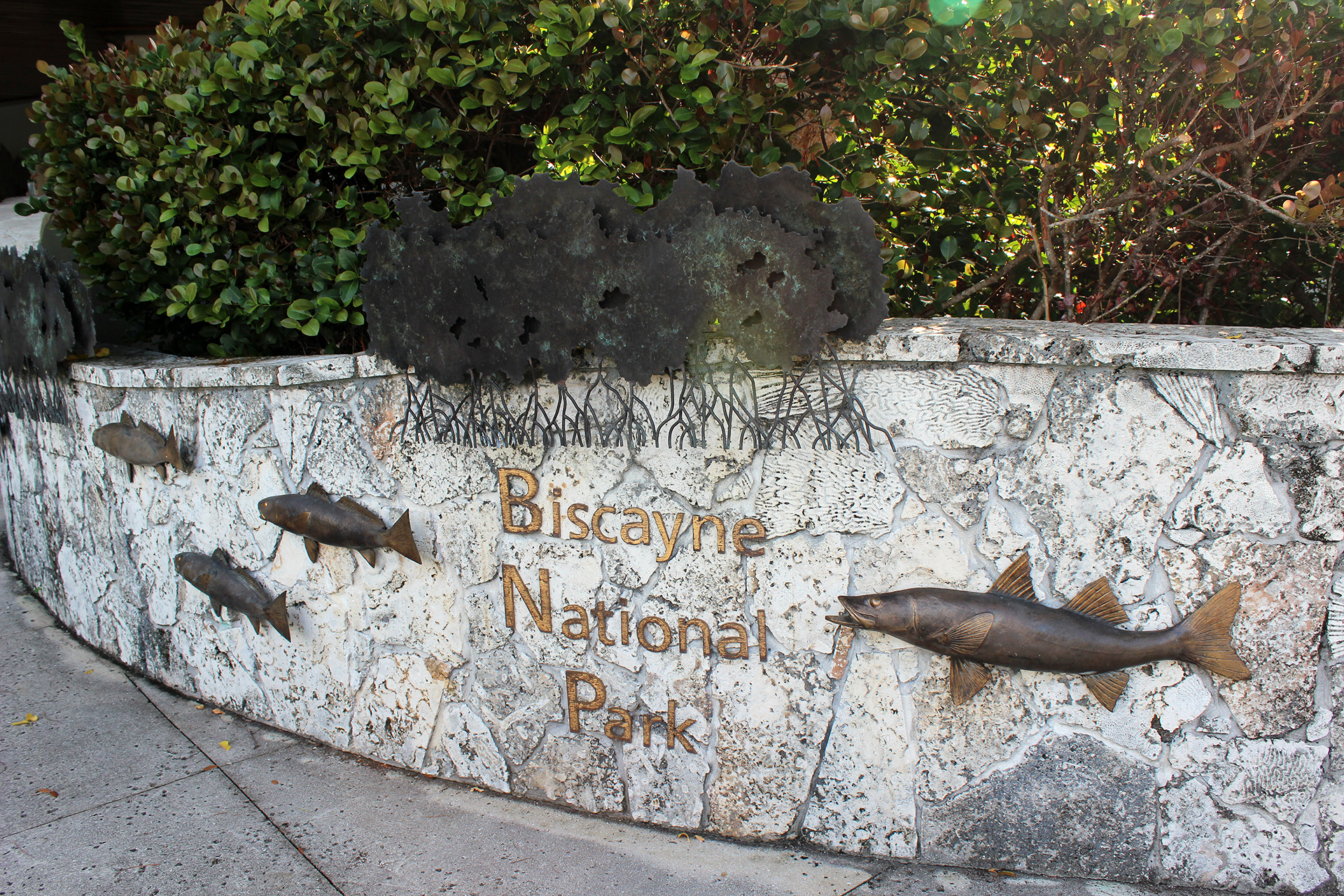 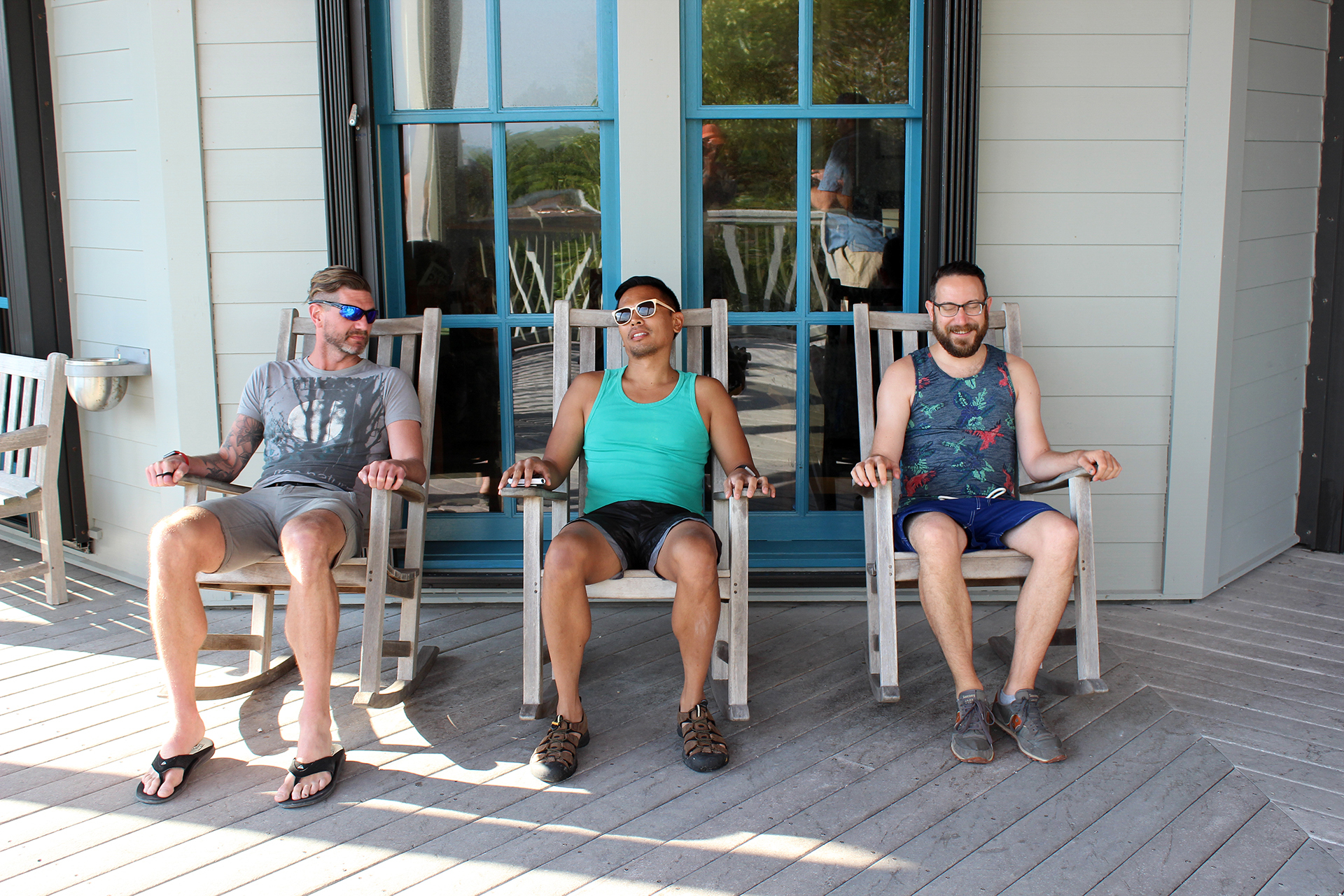 The Visitor Center features a wide, second-floor porch with rocking chairs, of which we took full advantage. 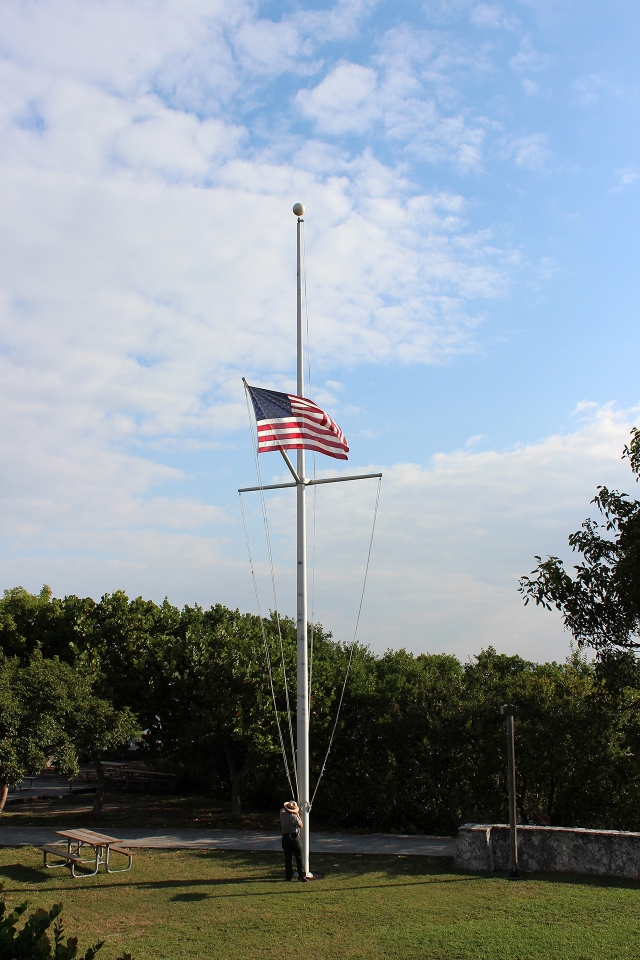 At 9am, we watched a ranger raise the American flag as Biscayne National Park officially began its day.

Once the Visitor Center opened, we went inside for a quick look around and to stamp our National Park passports. 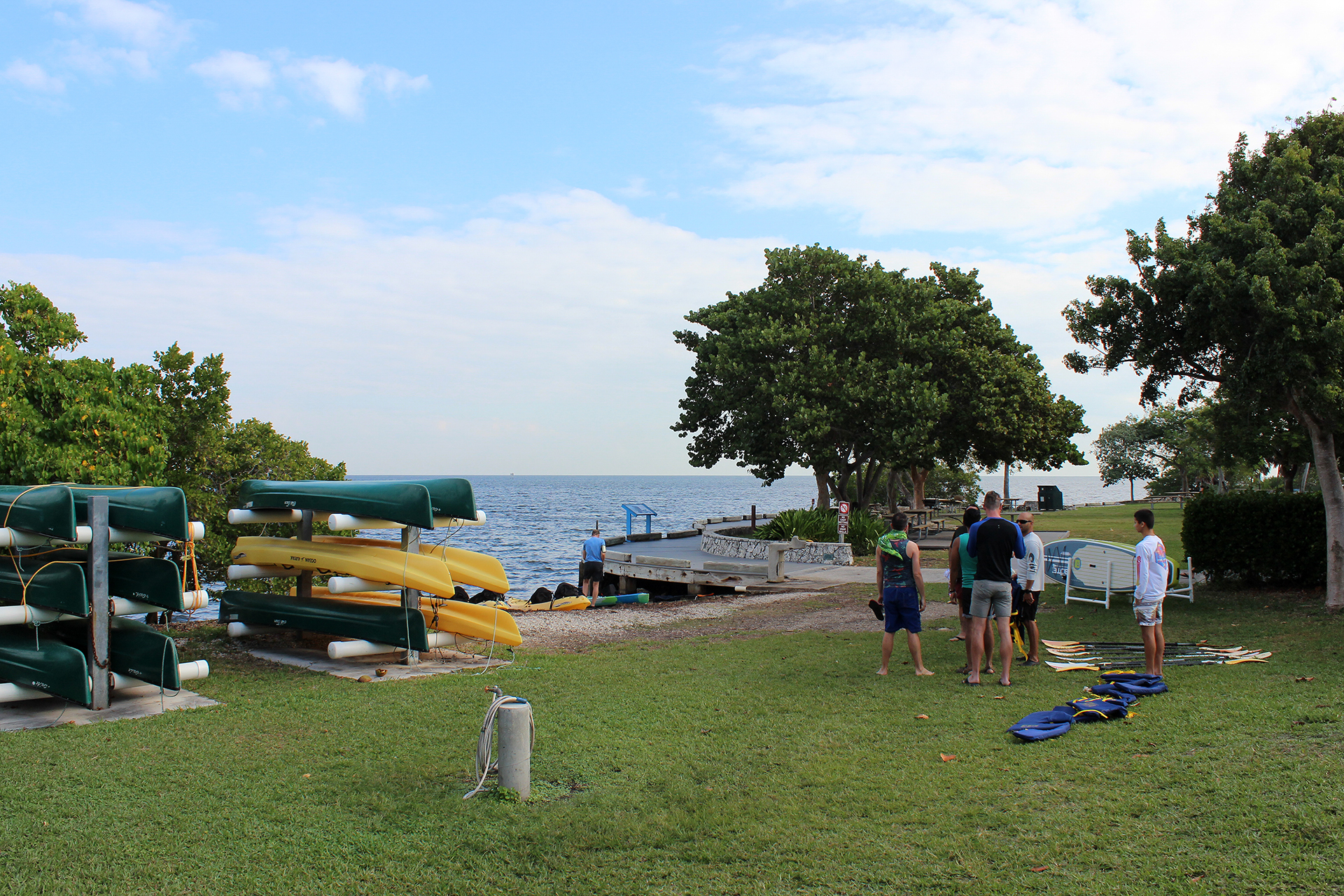 Back at the small beach, we paired off for our double-person sea kayaks: Nick and Juan, Noah and Sean, Kamrin and Ion, and Adam and me. Danny oriented us and gave us some simple instructions, and then he set us off onto the calm waters of Biscayne Bay. 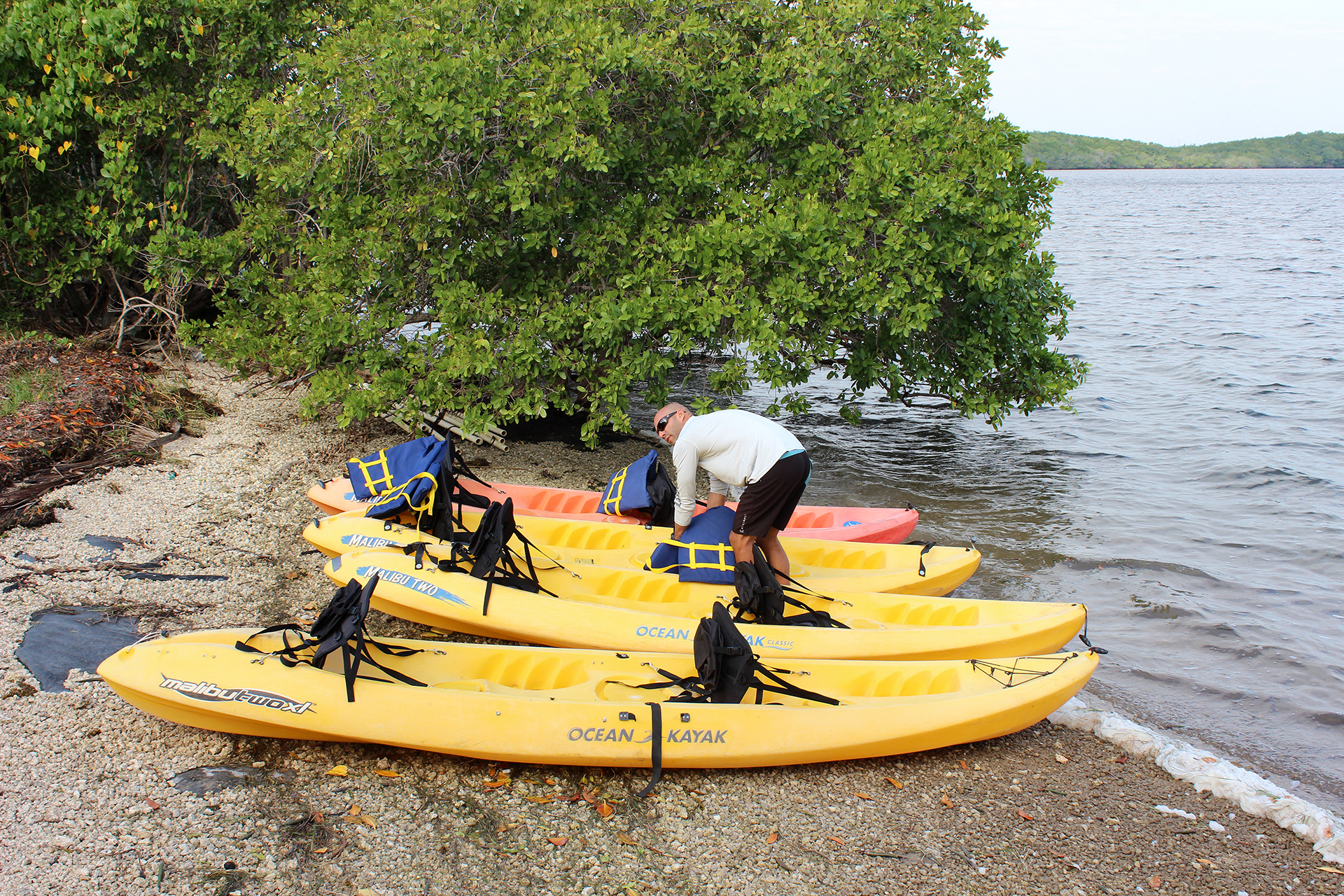 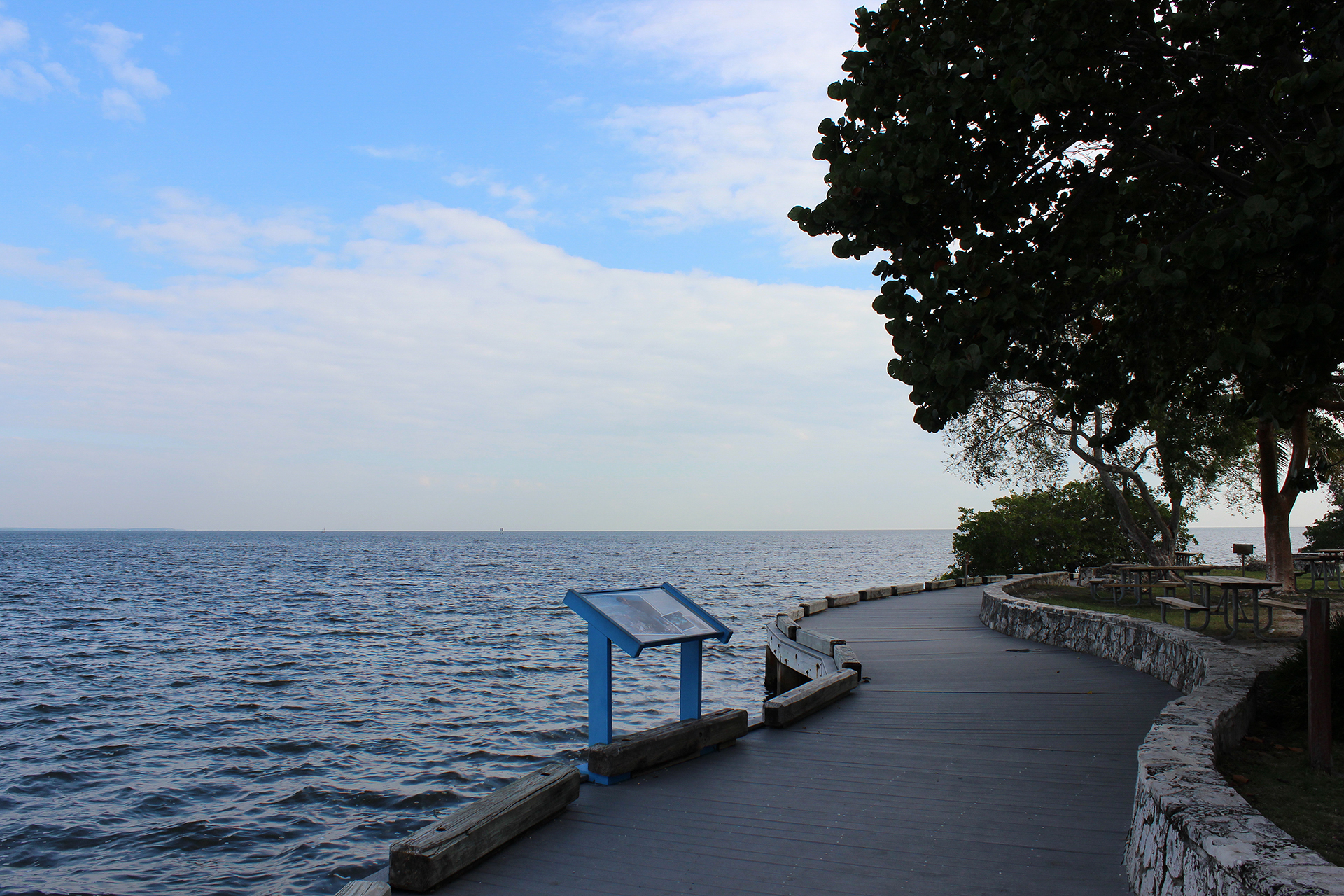 Although we all had paddling experience, and Sean and I had sea kayaking experience from Glacier Bay National Park, we were not remotely experienced or practiced enough to cross the Bay to the keys, so we spent our morning north of Convoy Point exploring the coastal mangrove estuaries. 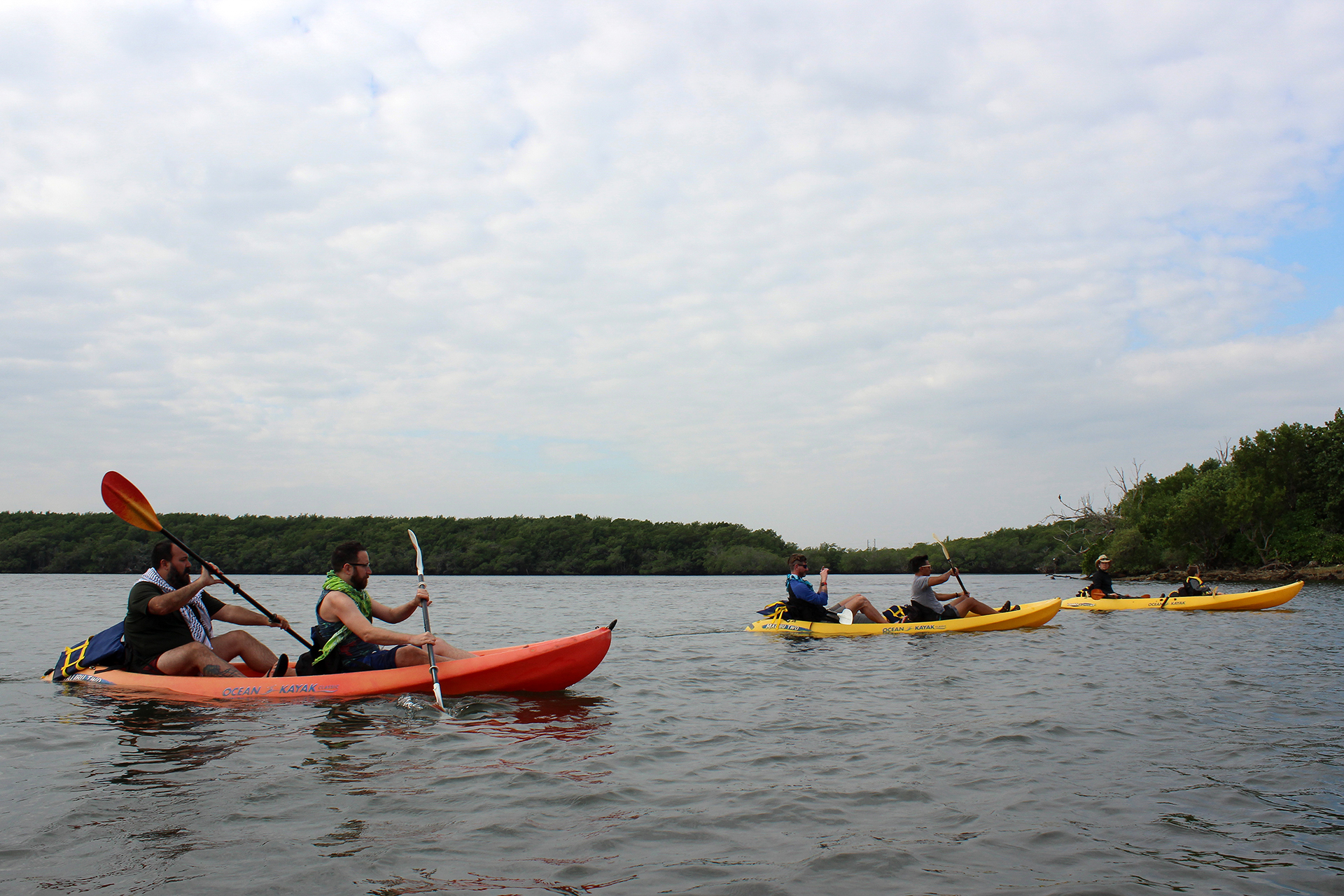 Shortly into our paddle, we came upon some Manatees, but I was unable to get a good photo.

Not far north of Convoy Point we entered Mowry Canal, which extends east from the Bay toward Homestead.

It appeared to be a popular site for locals to fish, and in that it reminded me of the harbors back home in Chicago. 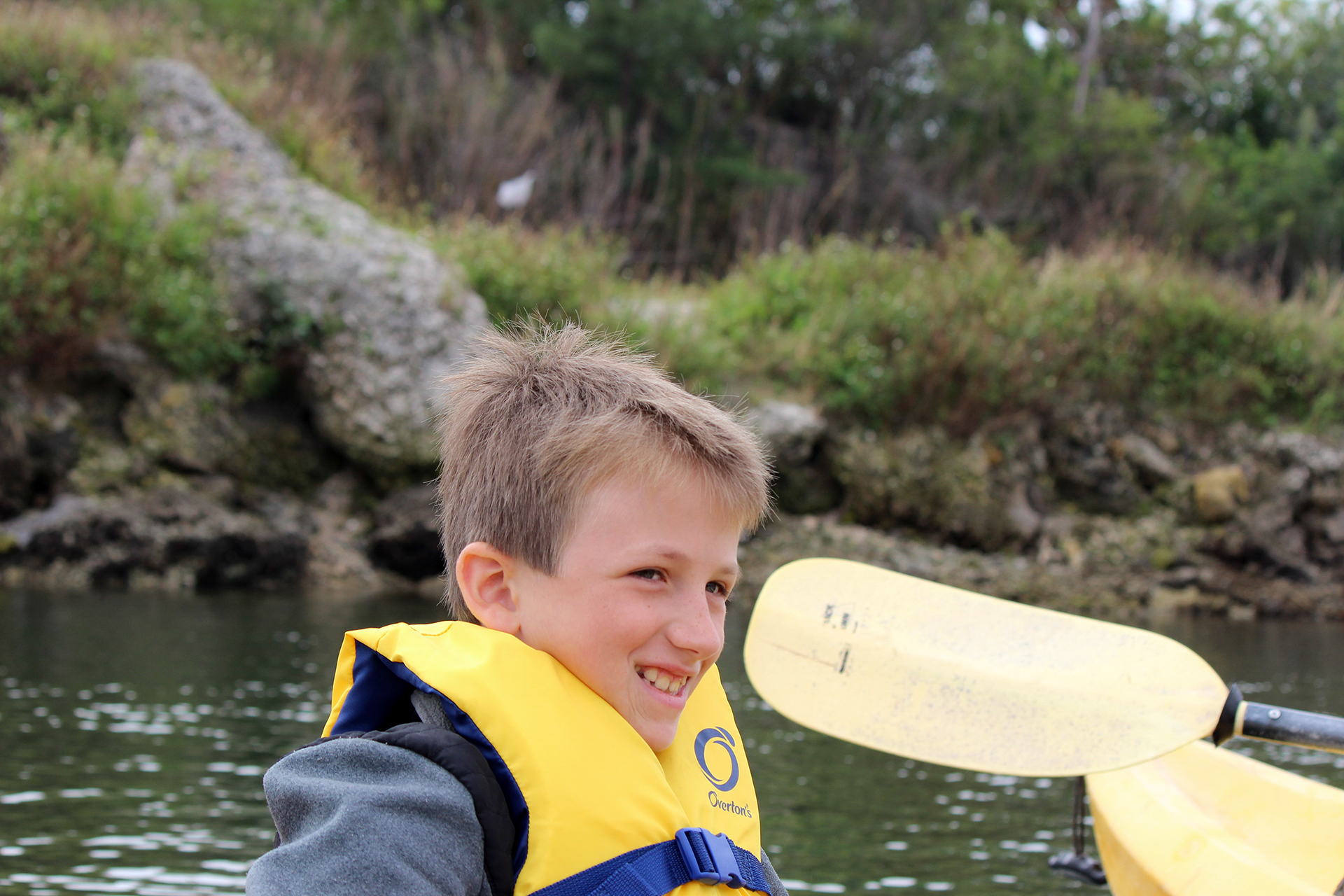 We had a bit of excitement in Mowry Canal when we spotted a young American Crocodile. 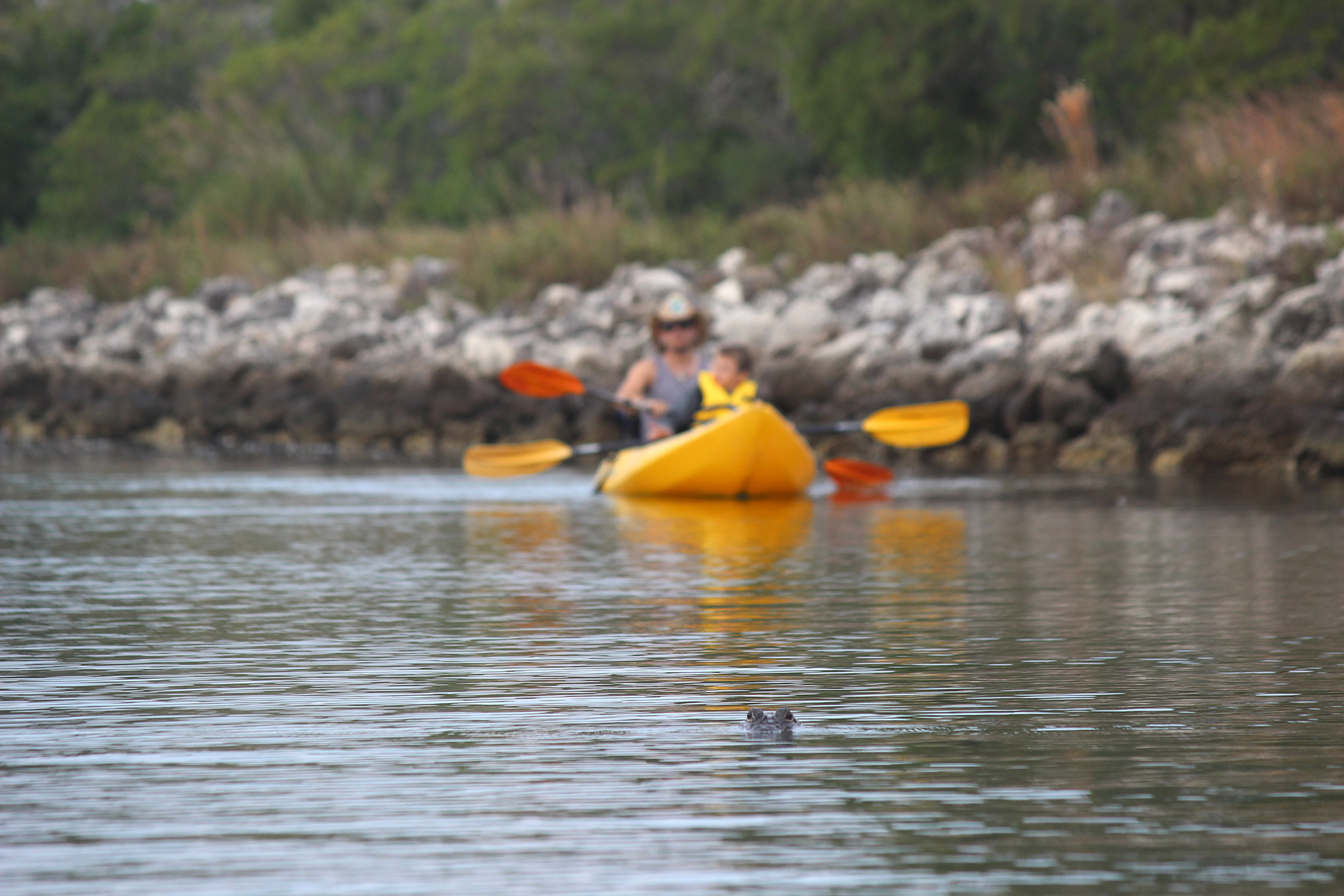 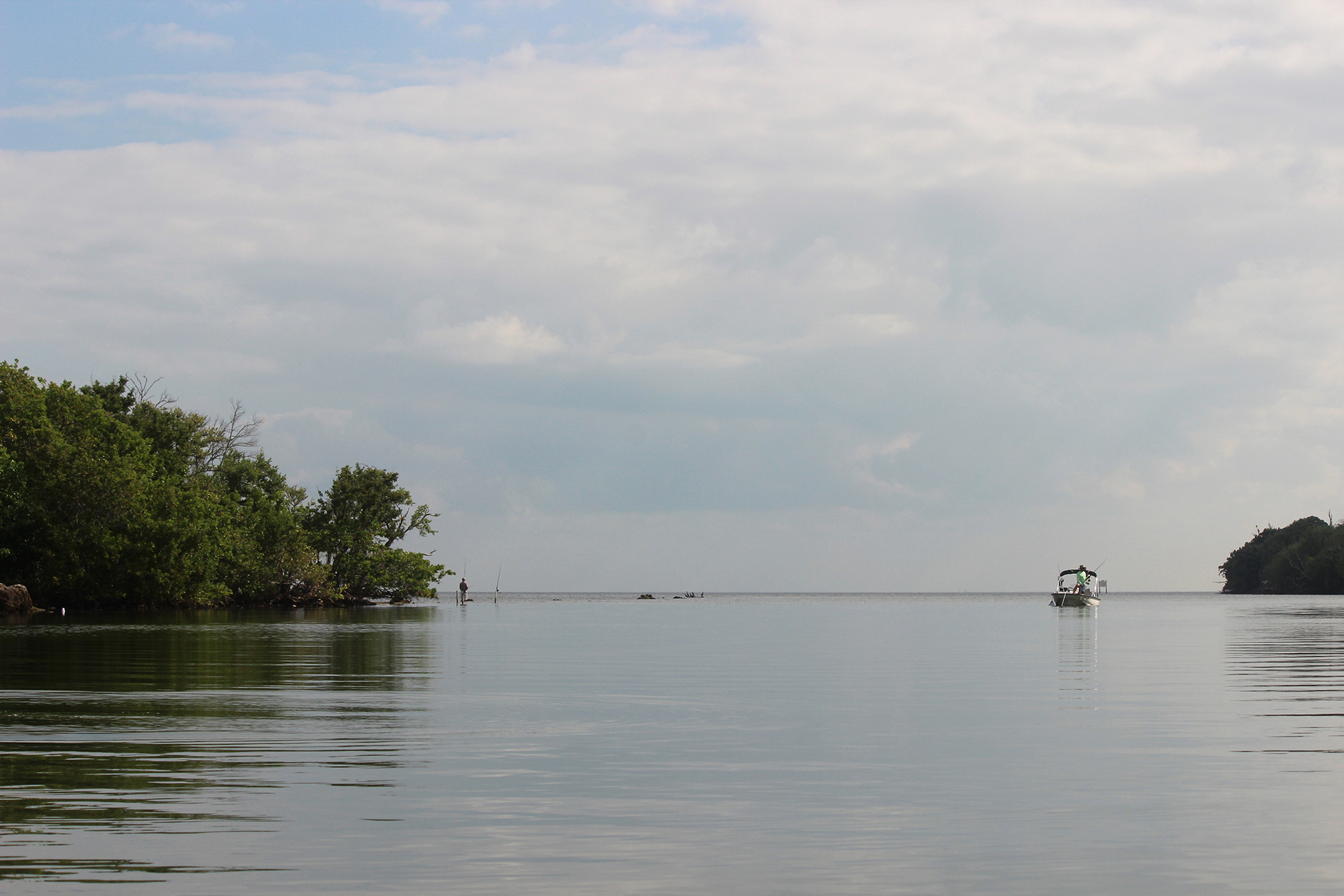 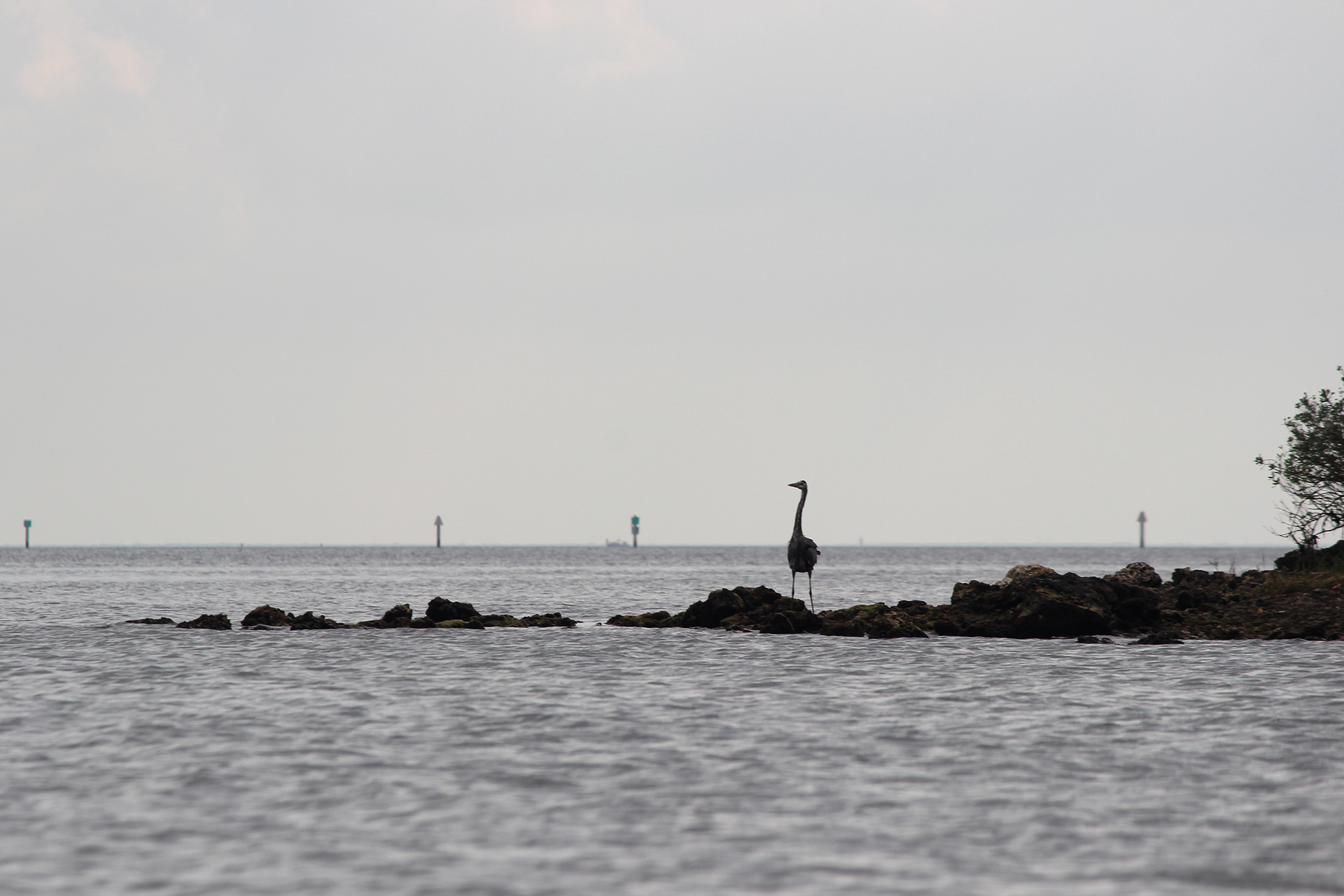 Sean and Noah were the speed demons of the paddling trip, and they were soon gone along the mangroves to the north. Nick and Juan were doing their thing. But Adam and I generally stuck near Kam and Ion, although they did have to ford a low embankment near the outlet of the canal to cross over to where we were. 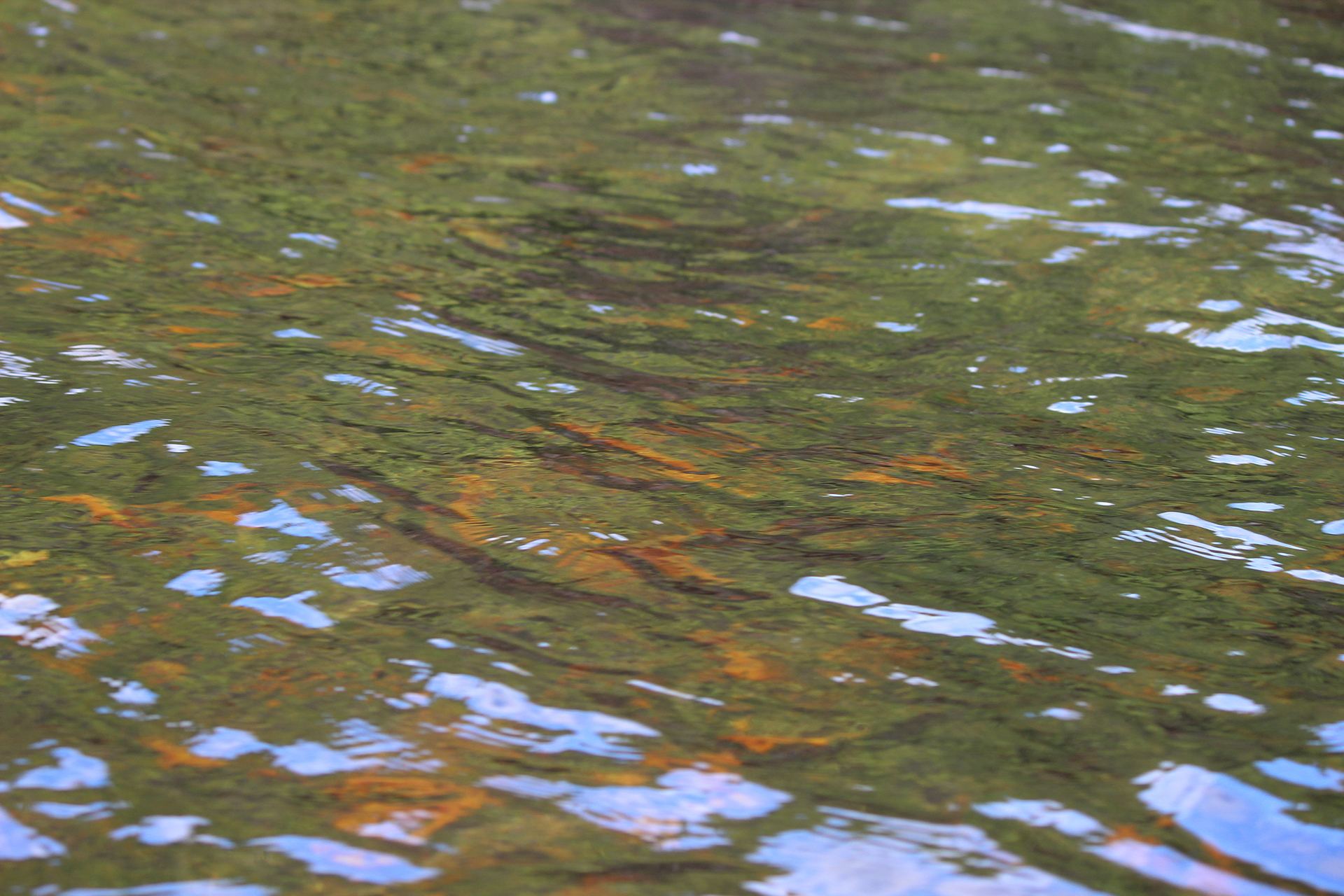 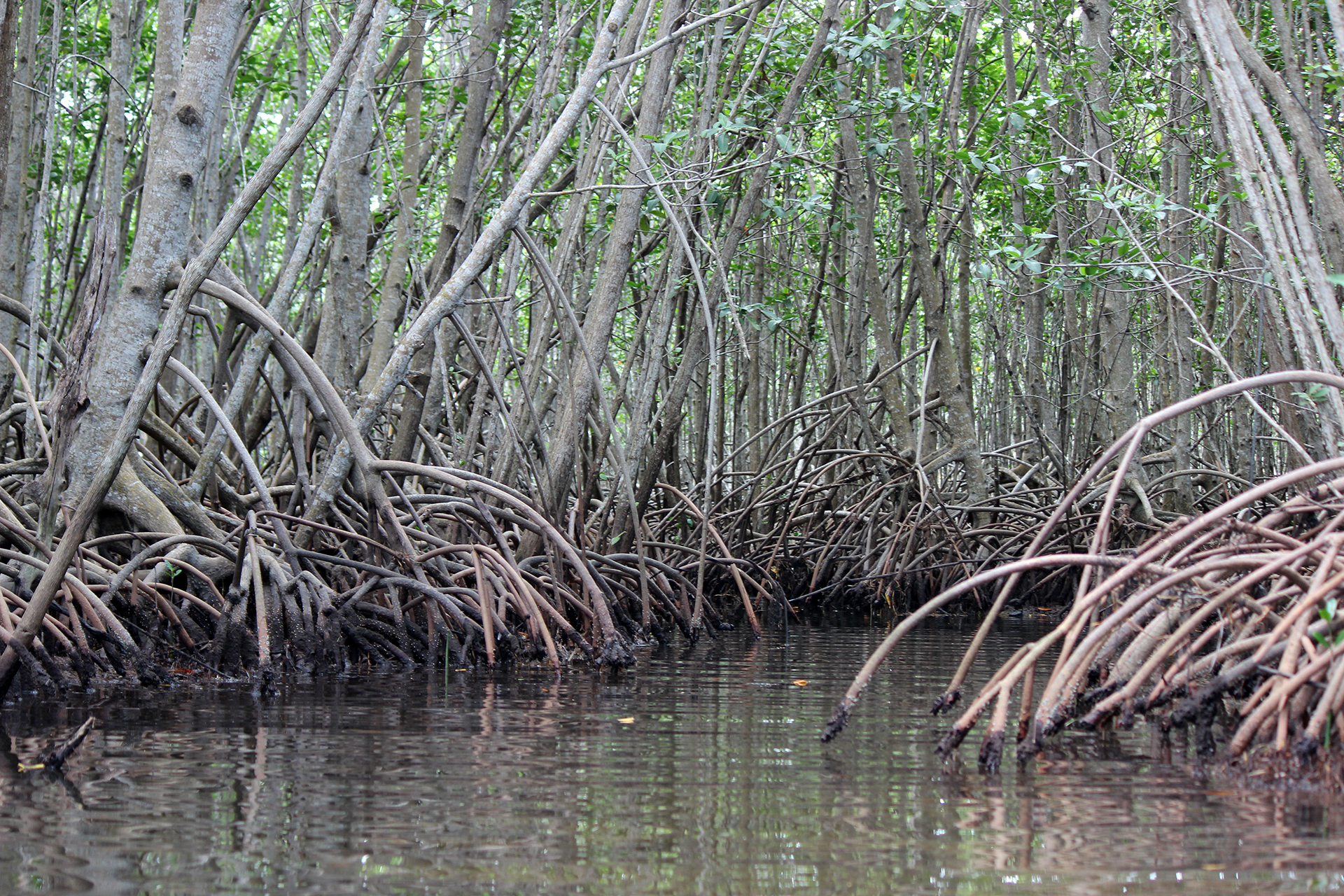 Adam and I paddled into the mangroves. In addition to protecting the Bay and its keys, Biscayne National Park protects over 4,800 acres of coastal mangrove estuary, the largest stretch of shoreline mangroves left on Florida’s Atlantic coast.

The protected, nutrient-rich estuaries are absolutely vital to an array of sea life that uses them as nurseries to rear and protect their young. Without the mangrove estuaries, the sea life of Biscayne Bay and South Florida would be far less diverse and abundant. 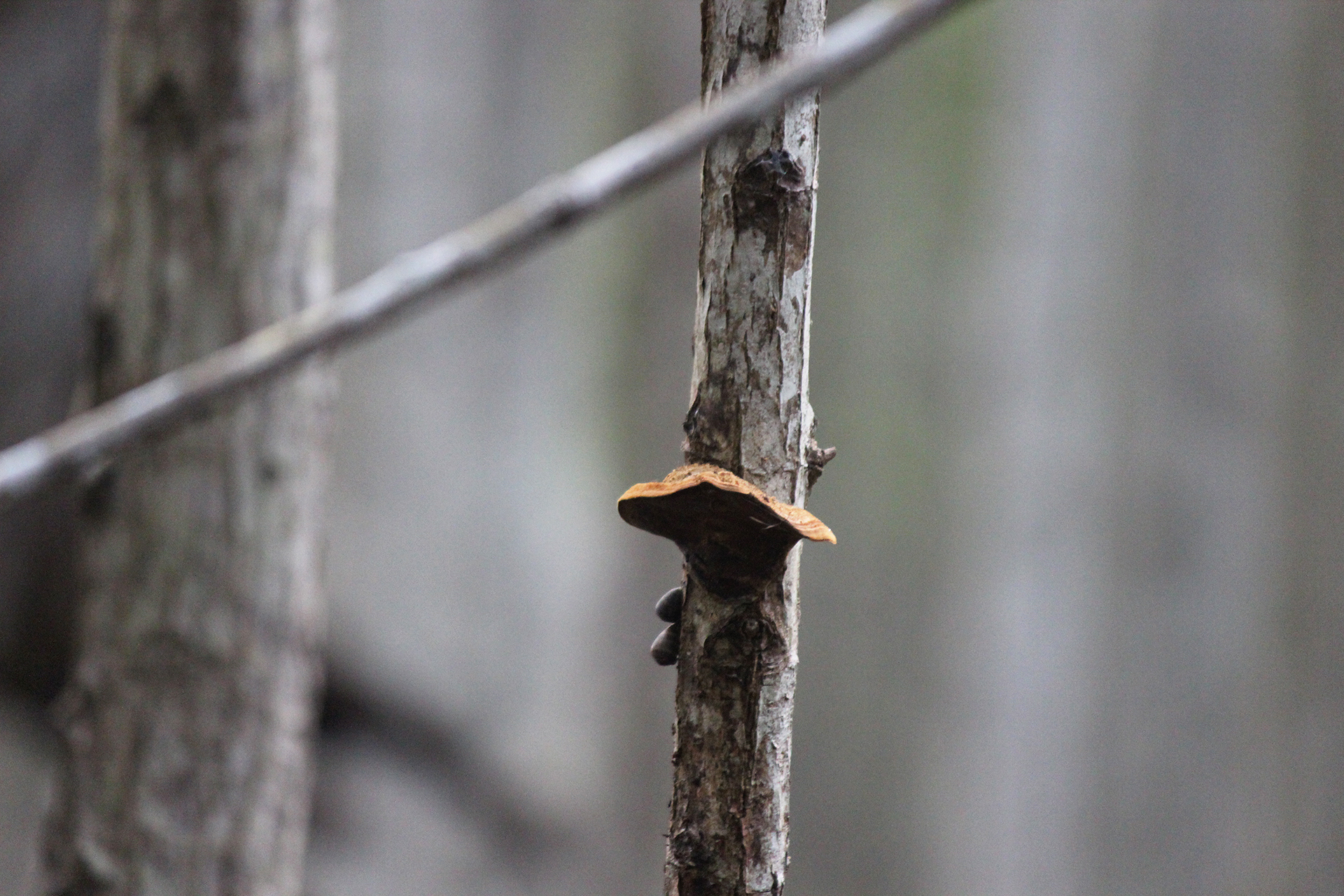 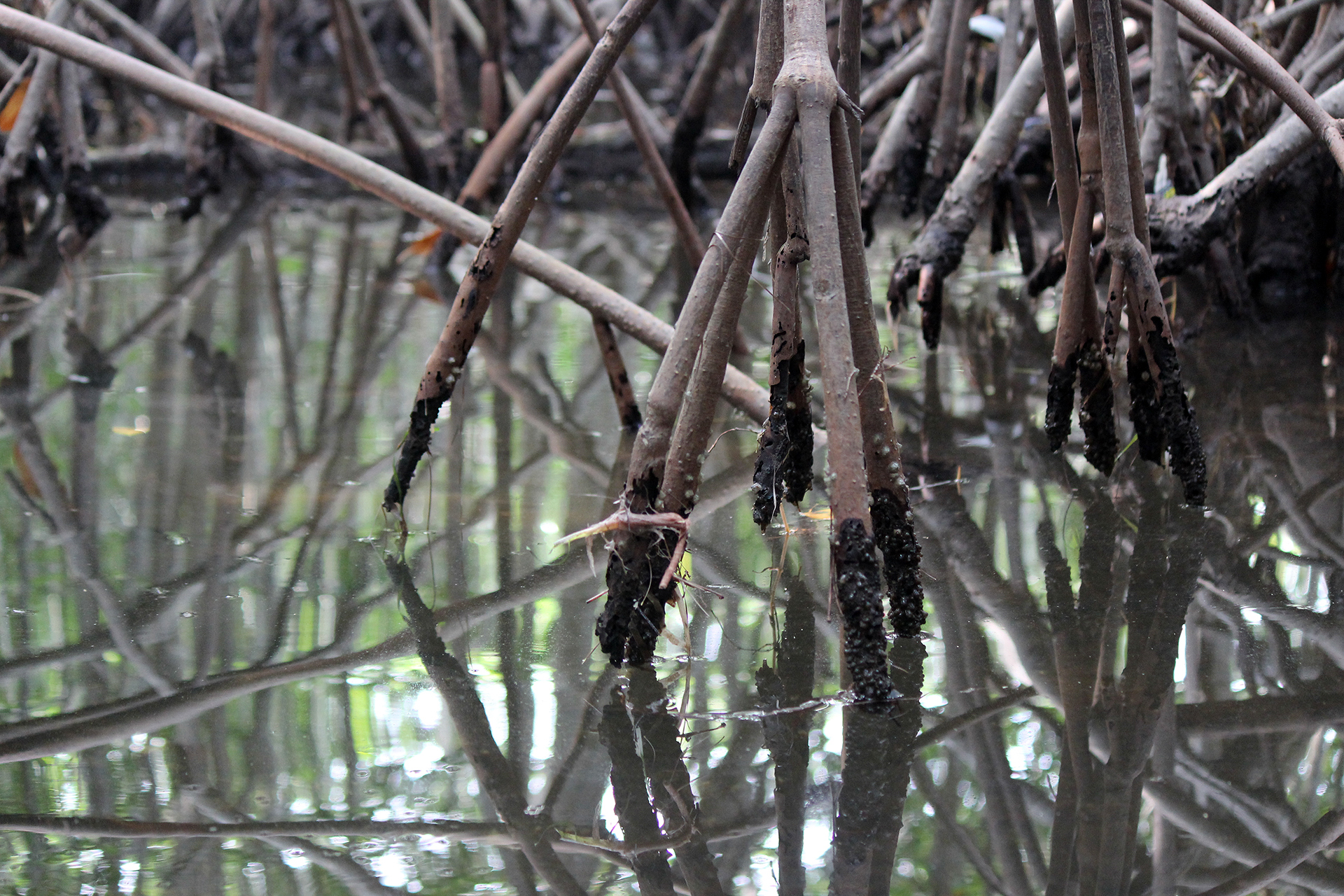 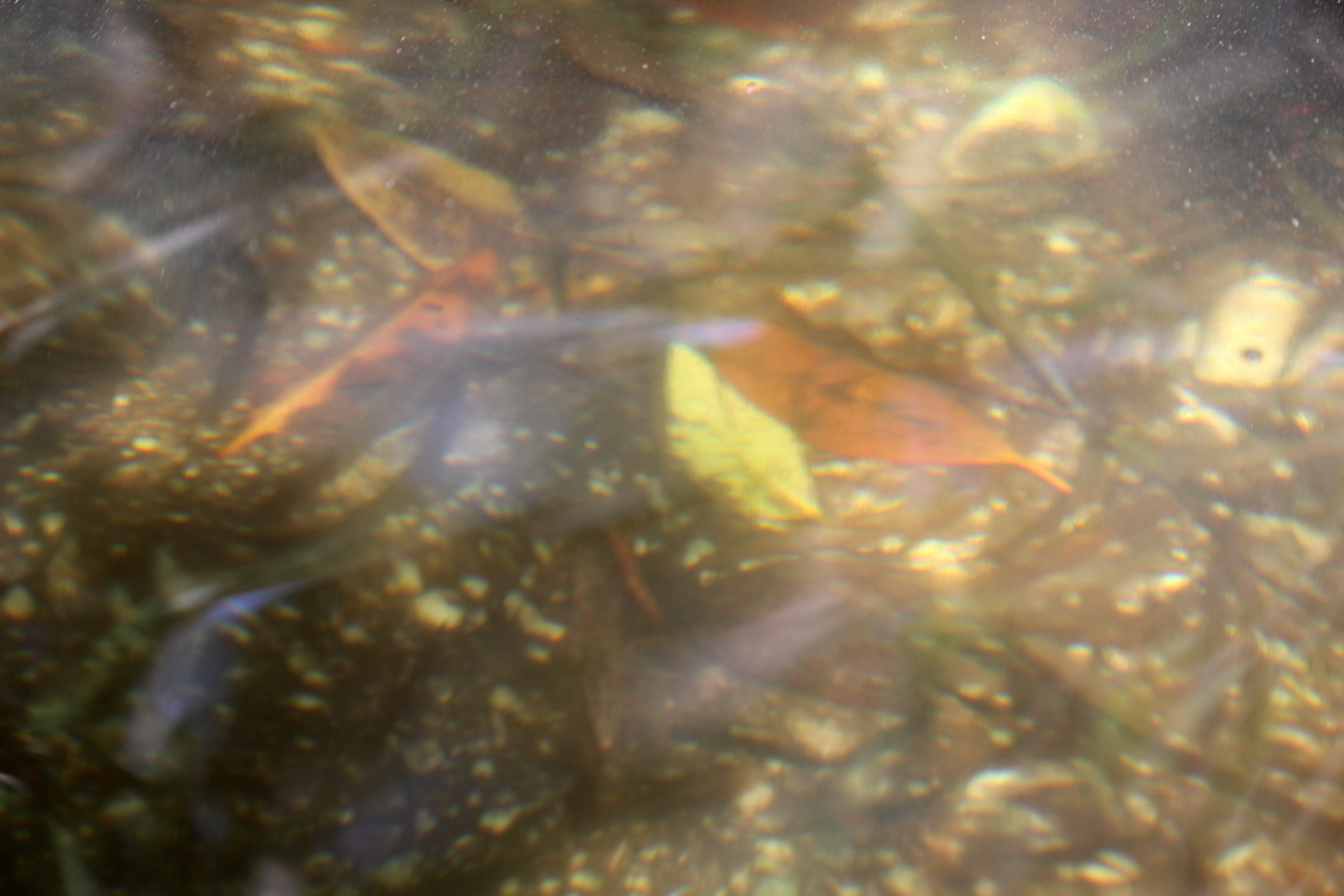 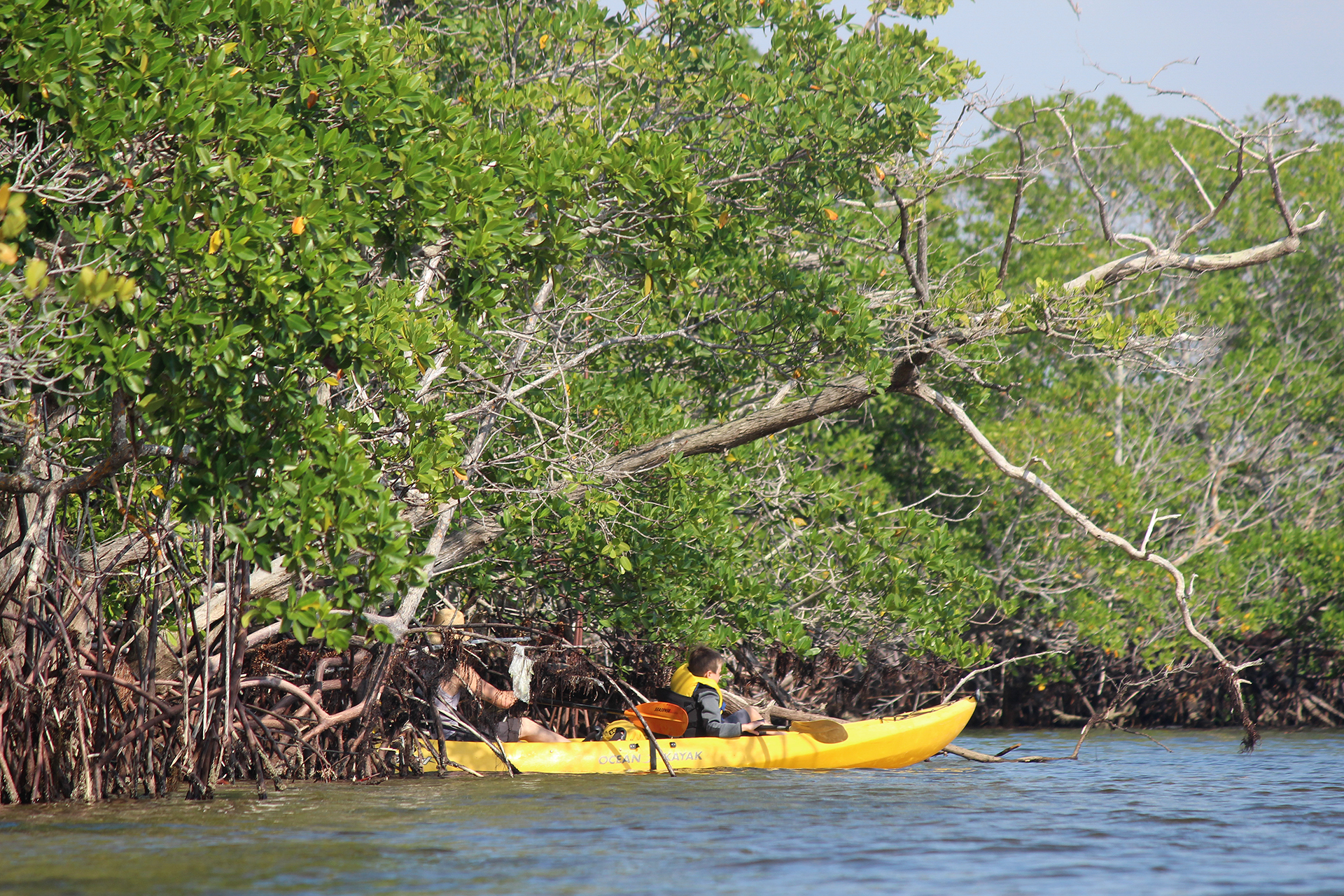 We emerged from the mangroves and continued north along the shore, spotting Kam and Ion, who had continued ahead, and also Sean and Noah.

The first hour of our paddle had been pretty overcast, but now the sun had come out. 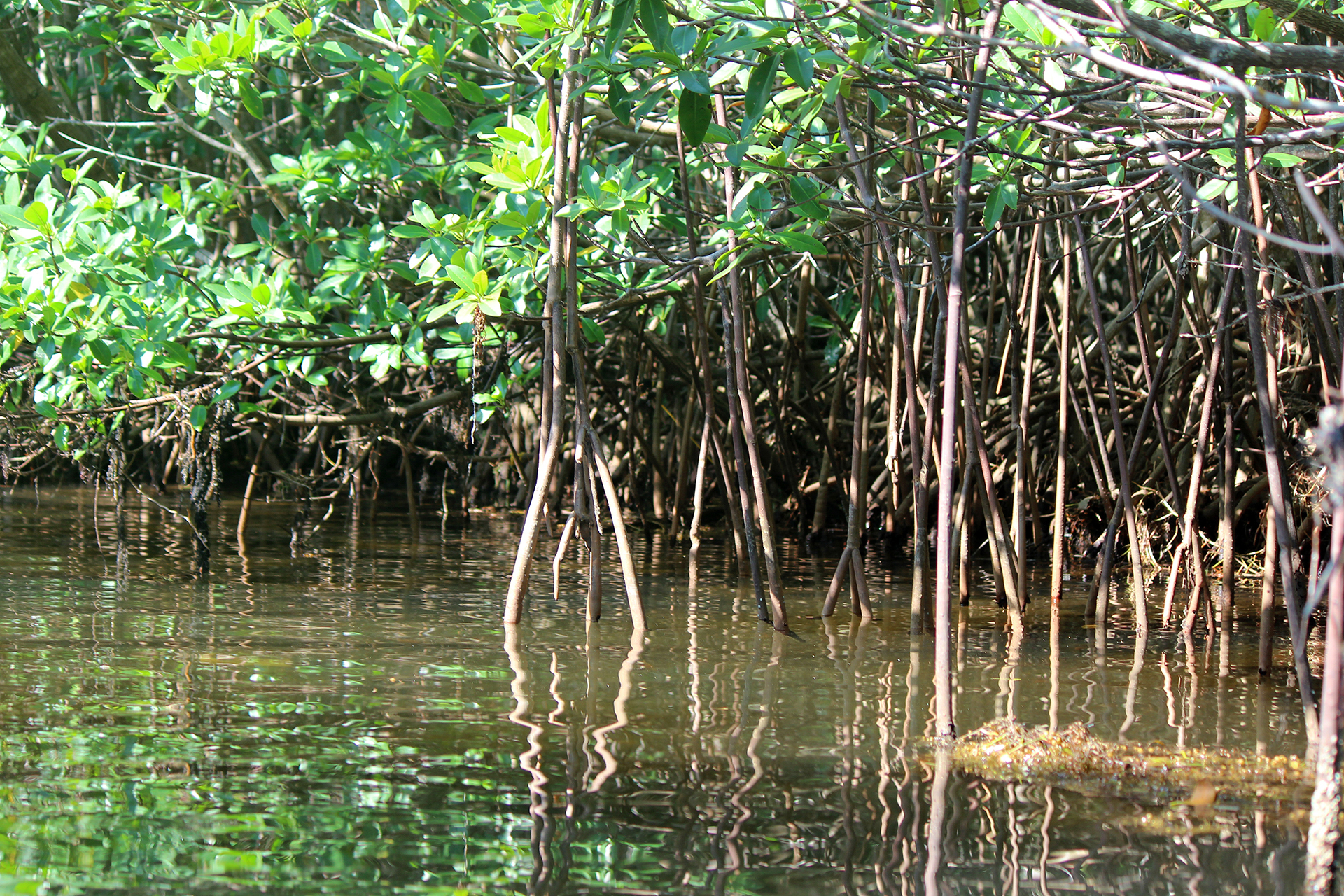 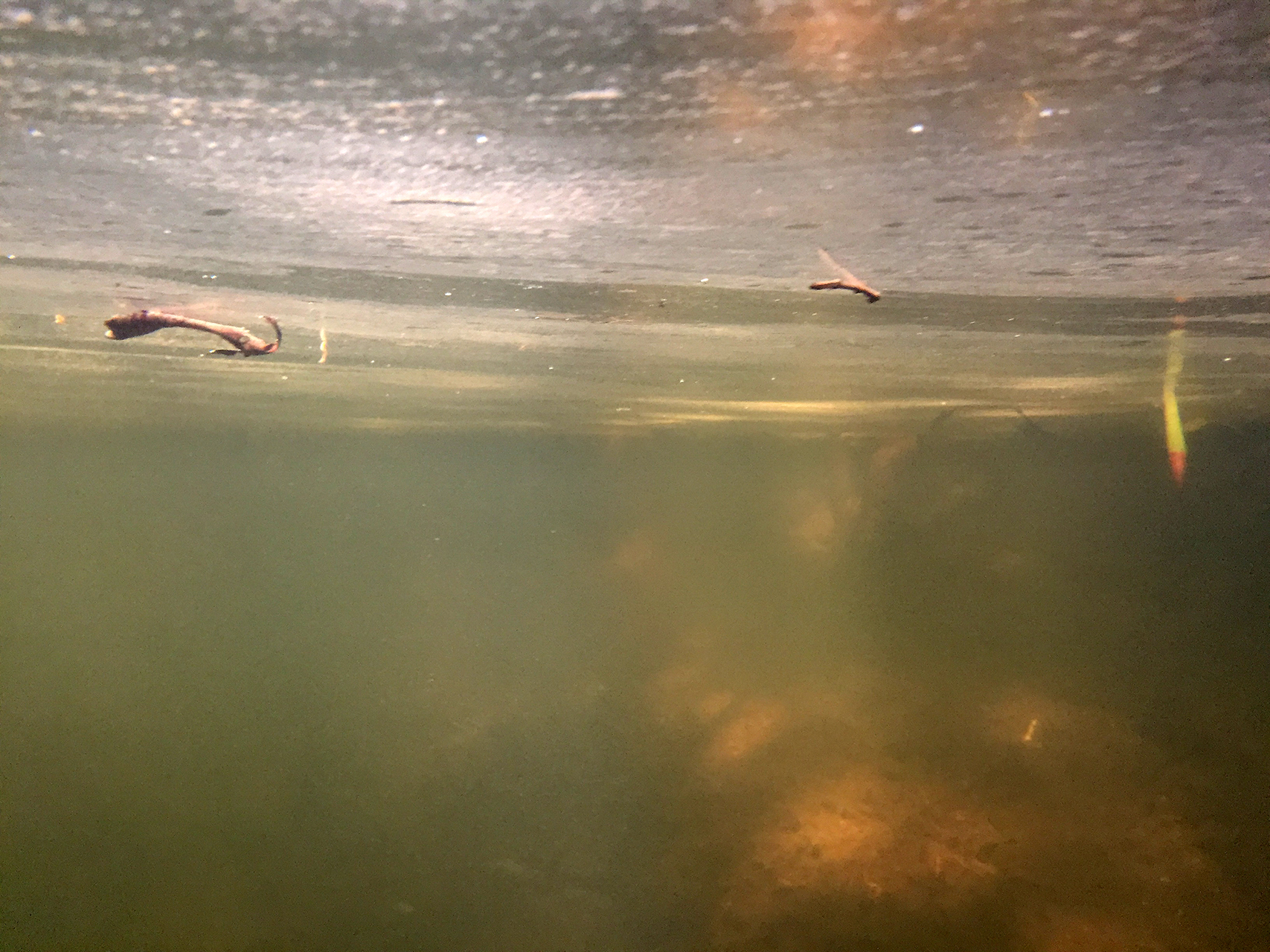 We entered the mangroves again at another, wider inlet. 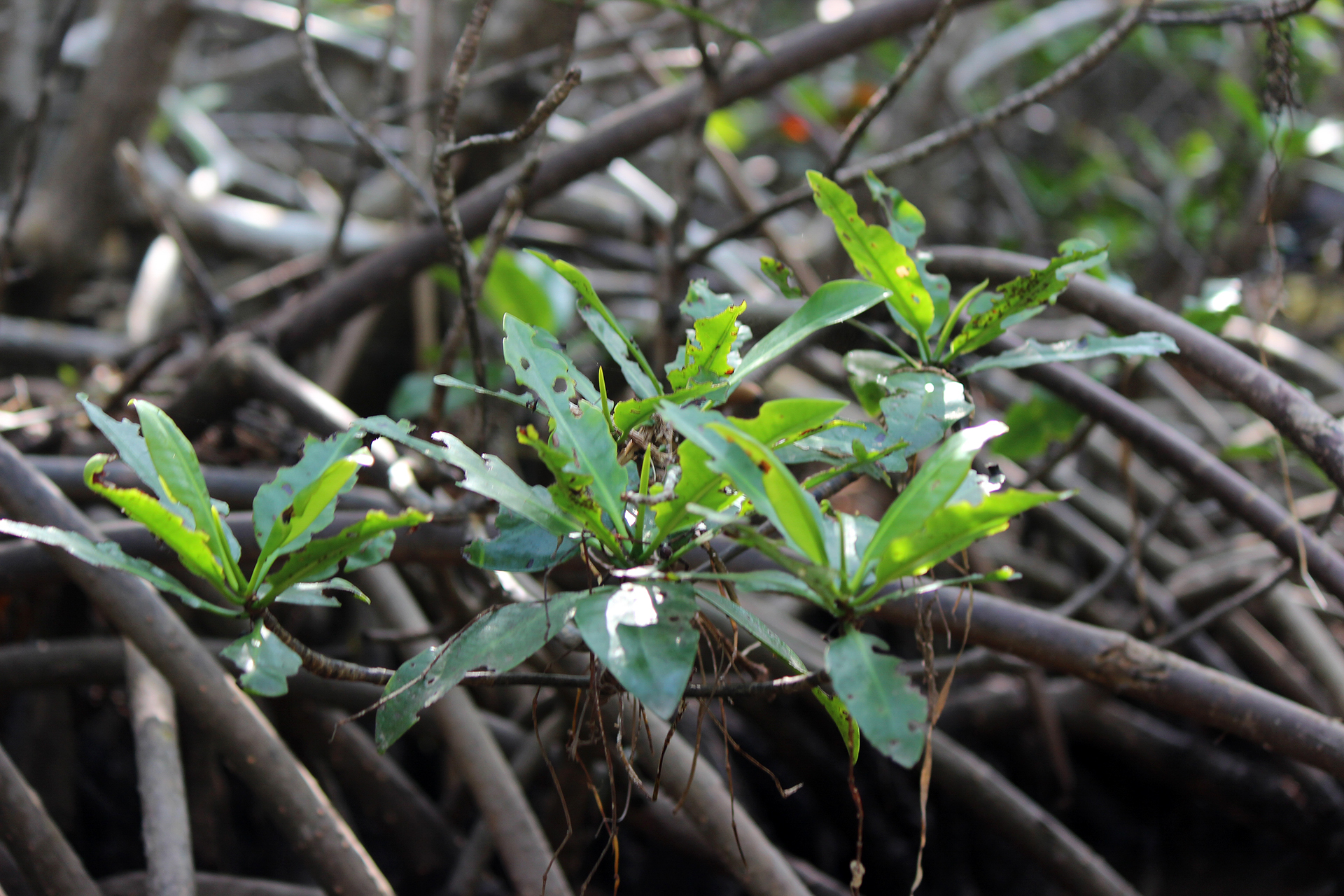 We noticed some trash, likely less because the mangroves were used as a dump per se, and more likely caused by junk floating in with the surf. 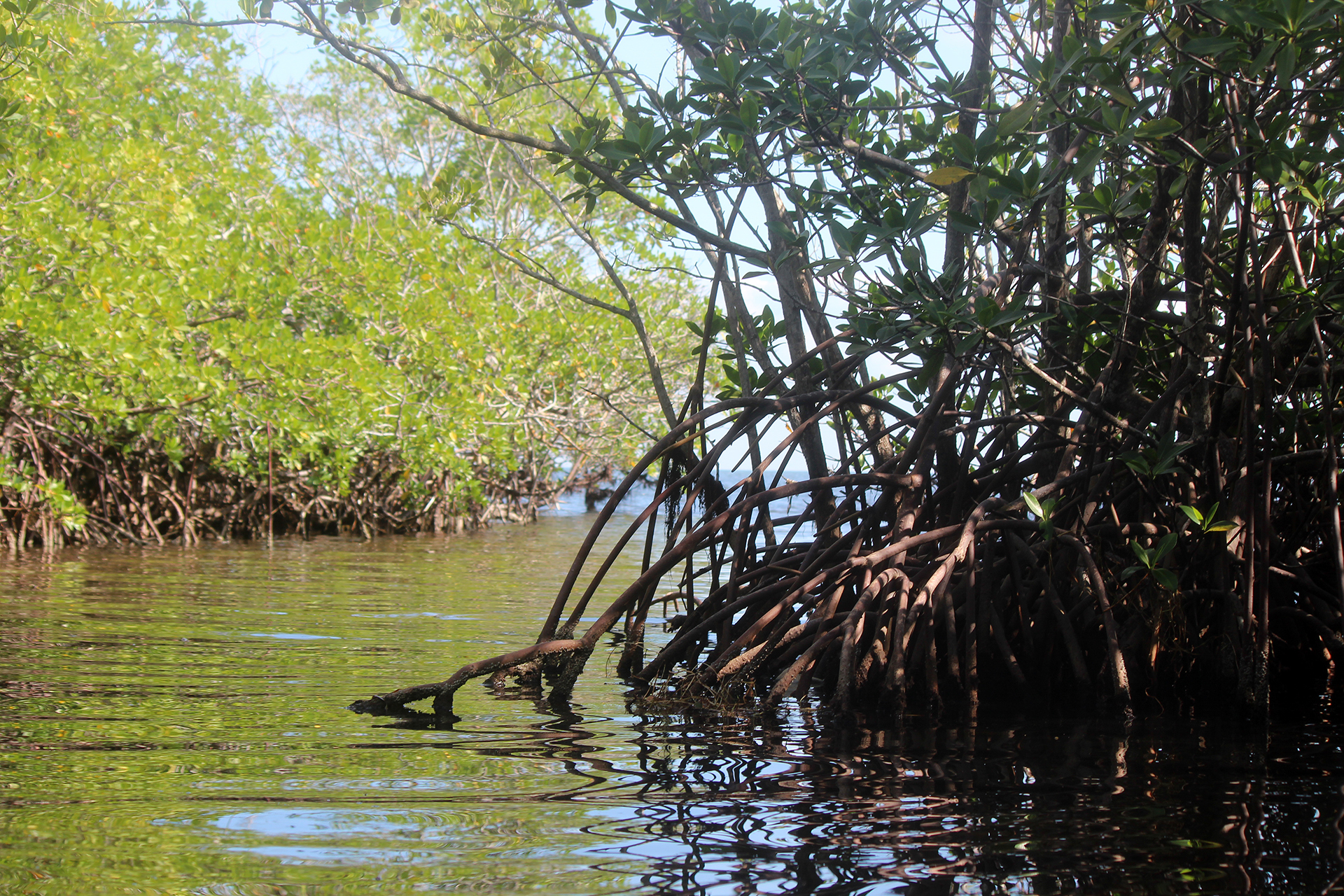 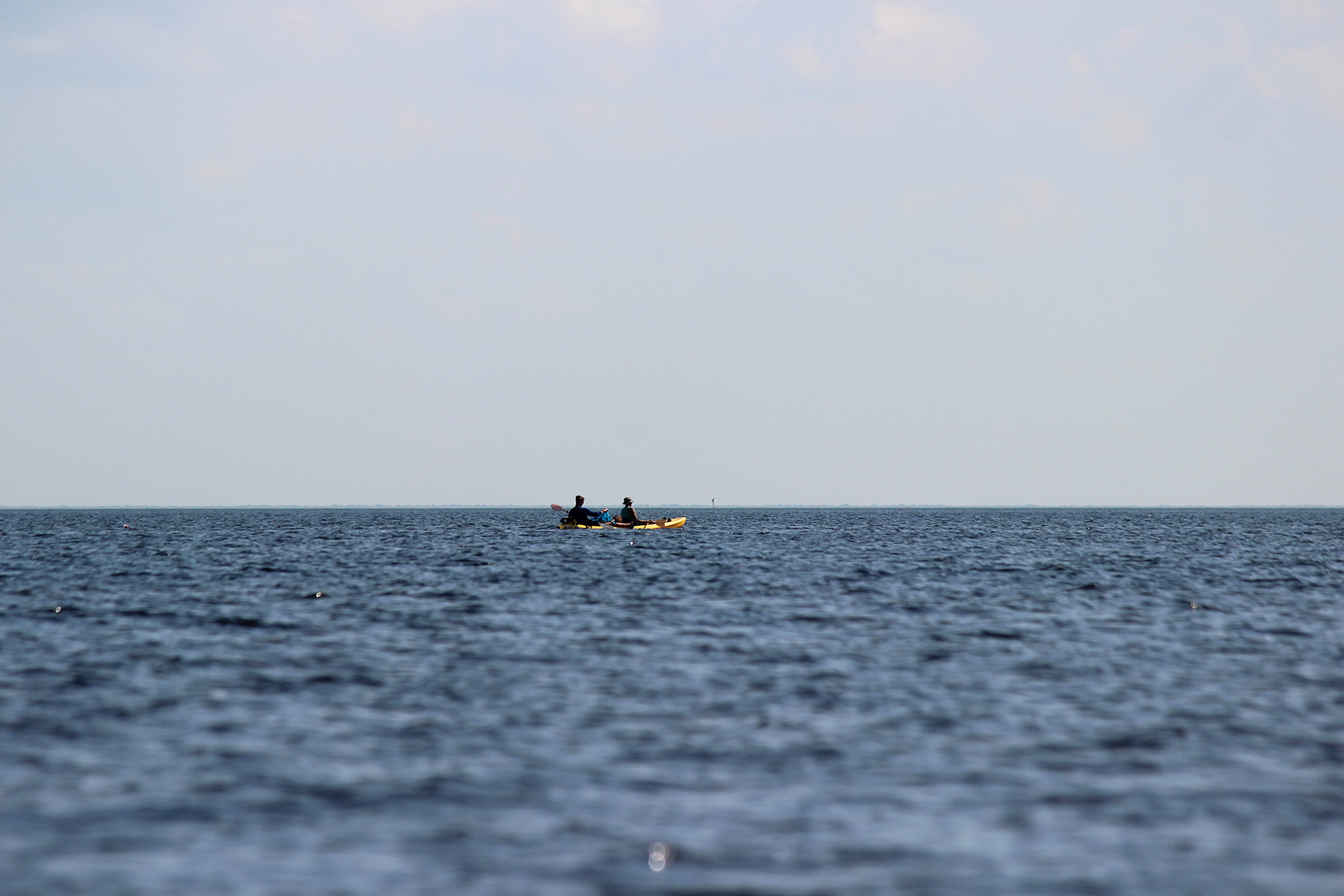 Compared to the Atlantic Ocean beyond, Biscayne Bay’s water does not move nearly so much, which makes any spill or pollution all-the-more dangerous in the Bay because it doesn’t get dispersed as quickly as it would in the open ocean.

Between the removal of Biscayne from the original Everglades National Park proposal and the establishment of Biscayne National Monument, four power plants (two fossil fueled and two nuclear) were built along the coast of Biscayne Bay. Illegal hot-water discharge from some of these facilities helped to build public opinion against further development on the Bay. 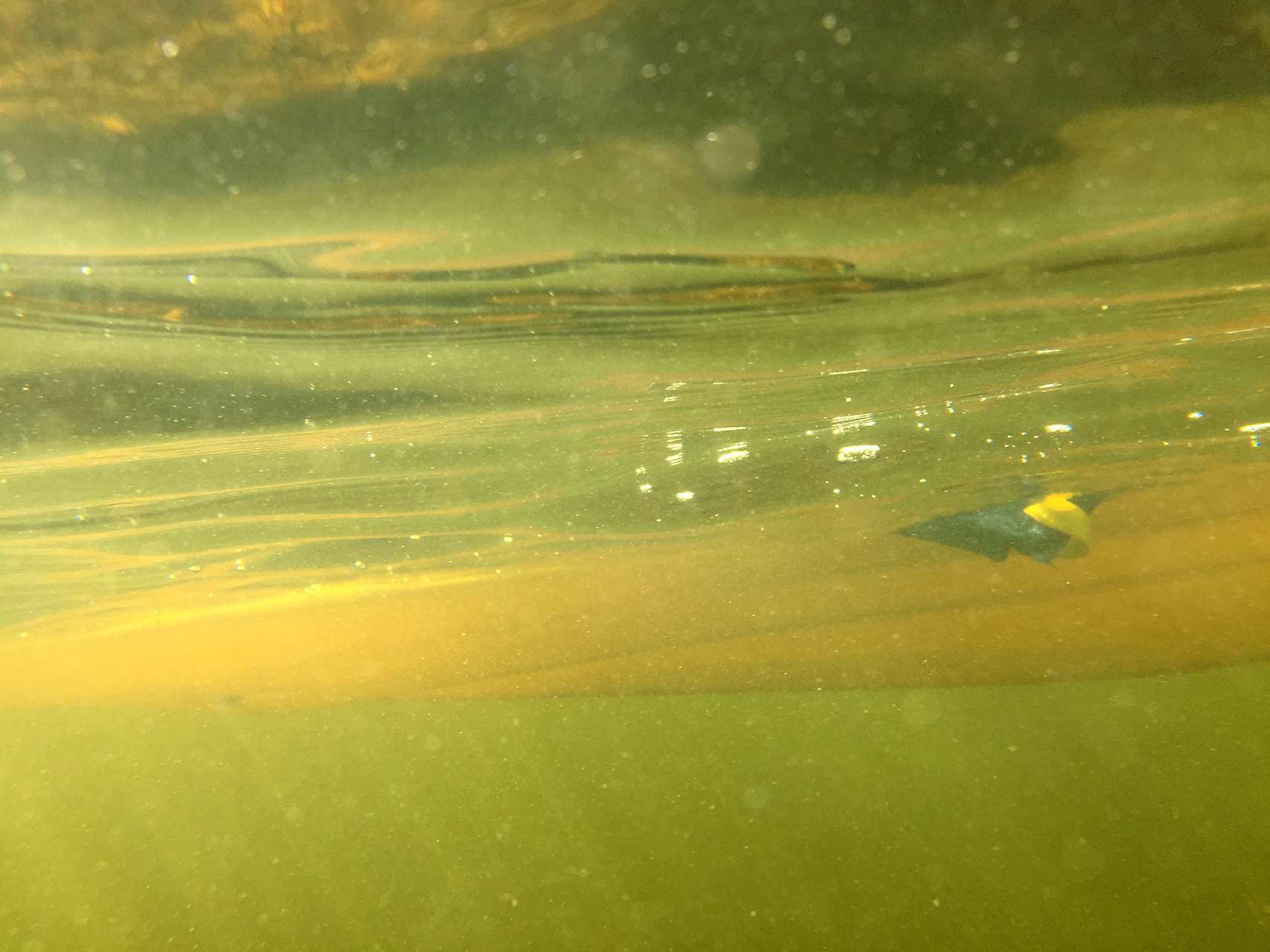 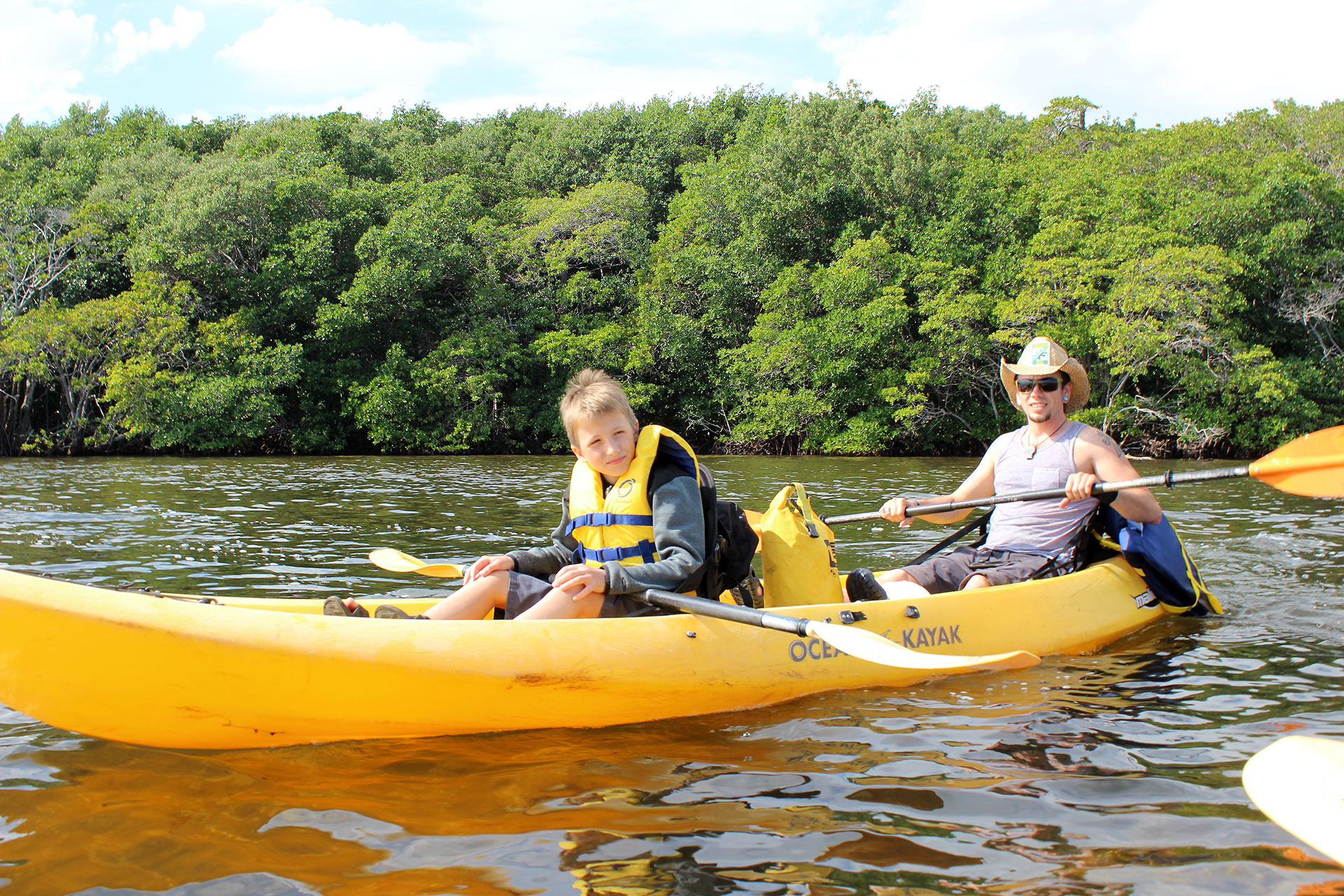 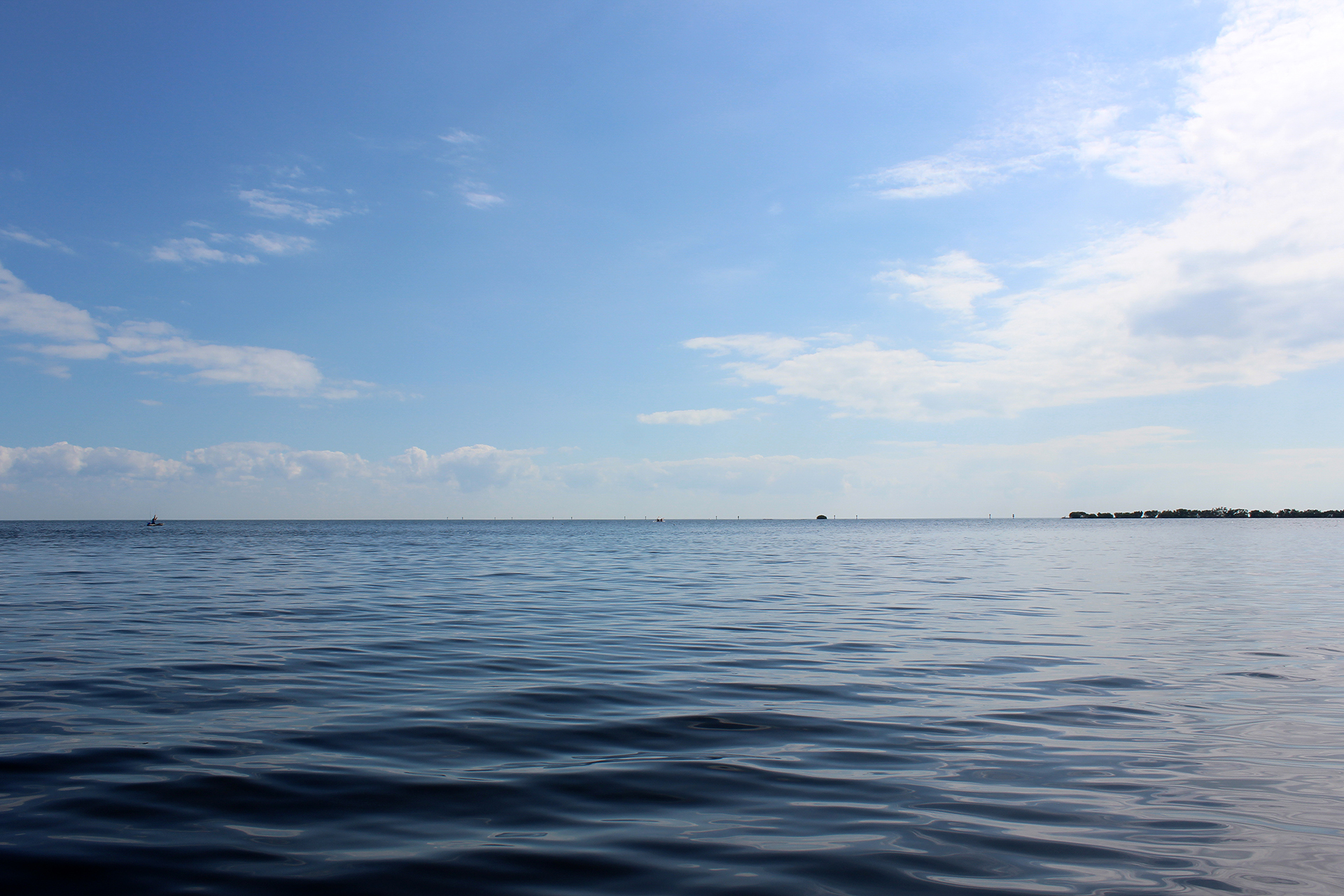 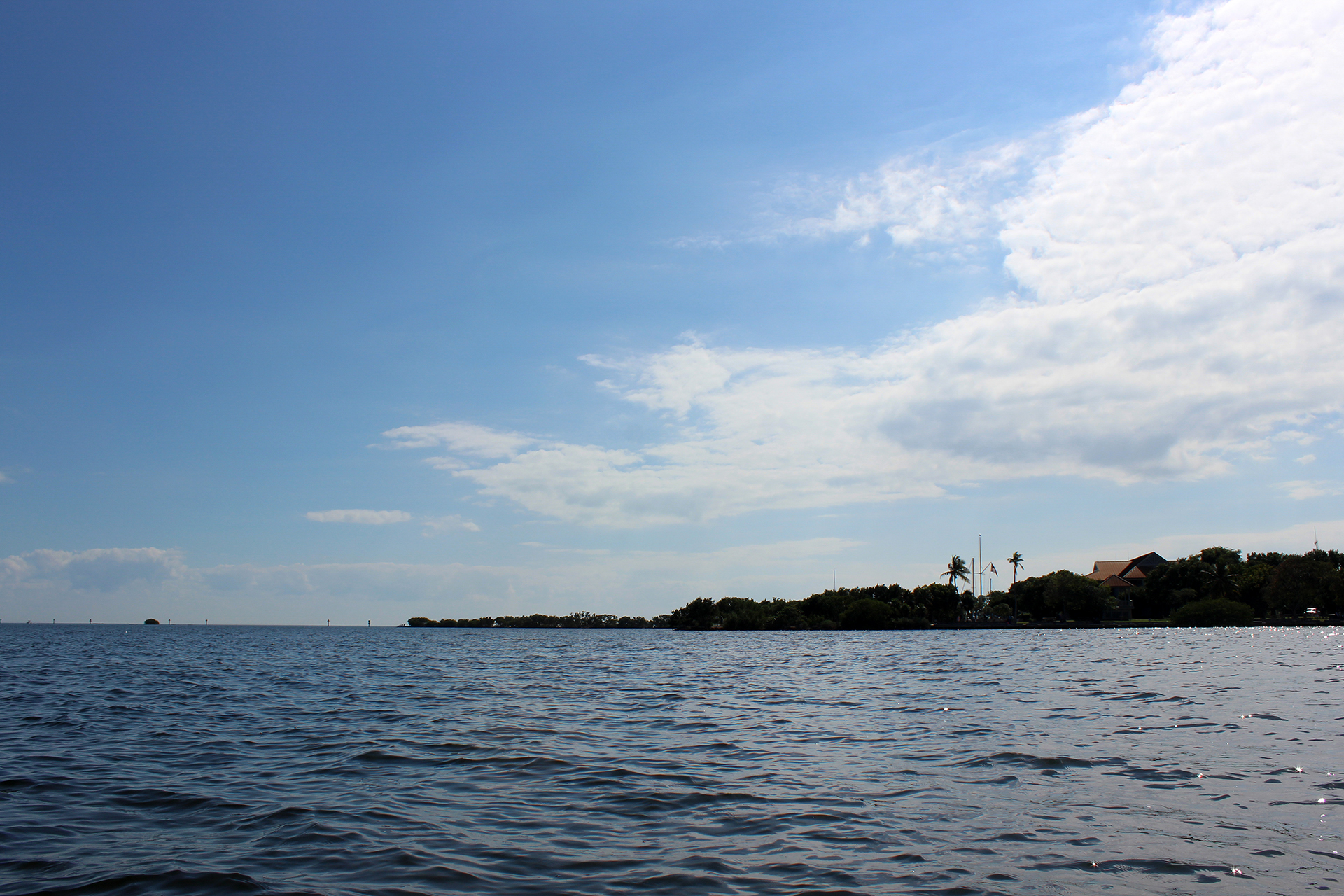 After about two and a half hours on the water, we returned to Convoy Point. Although we’d taken slightly different routes, we had all traveled at least 2.5 miles round trip. Sean and Noah had likely traveled closer to three miles. 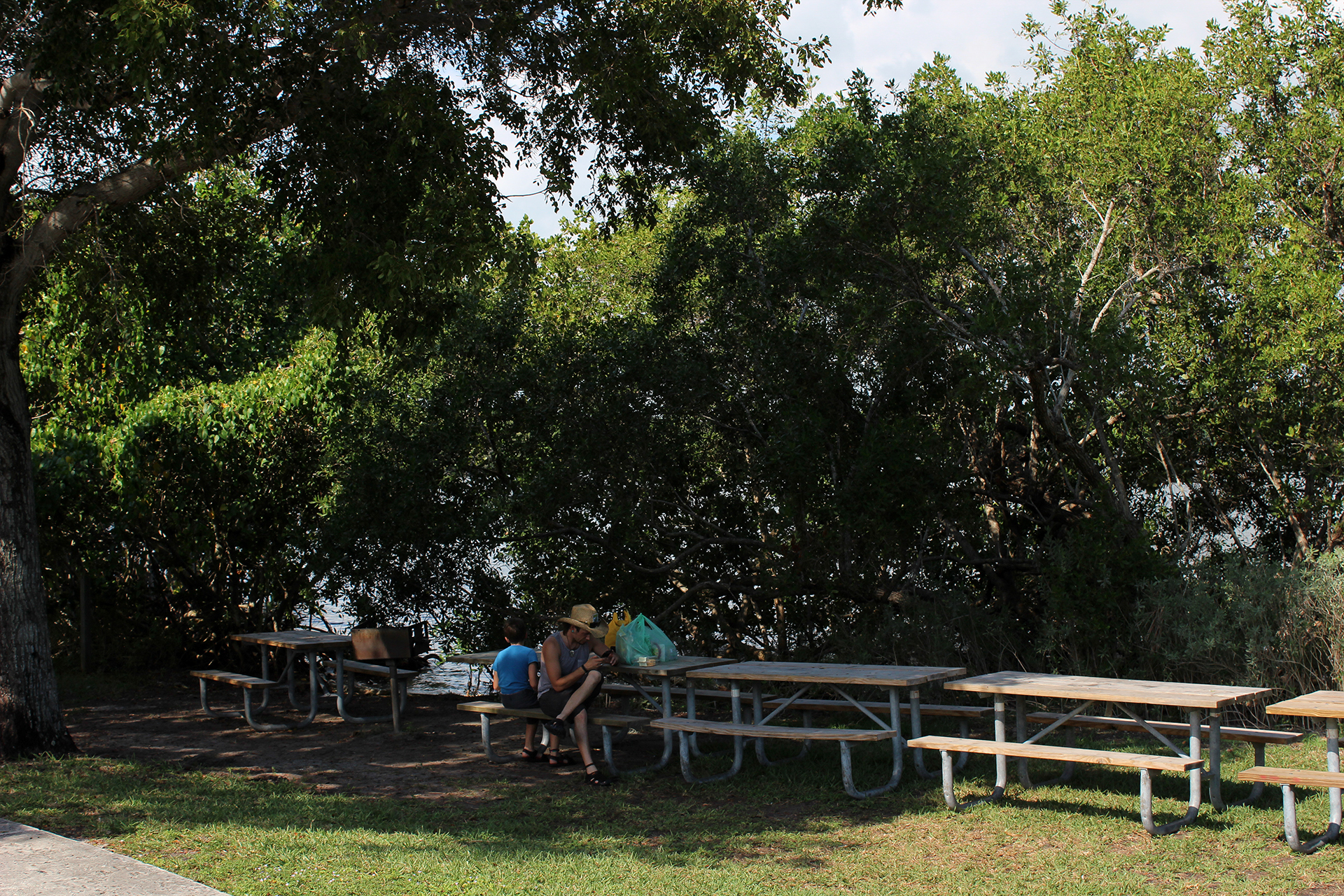 Now it was time for lunch.