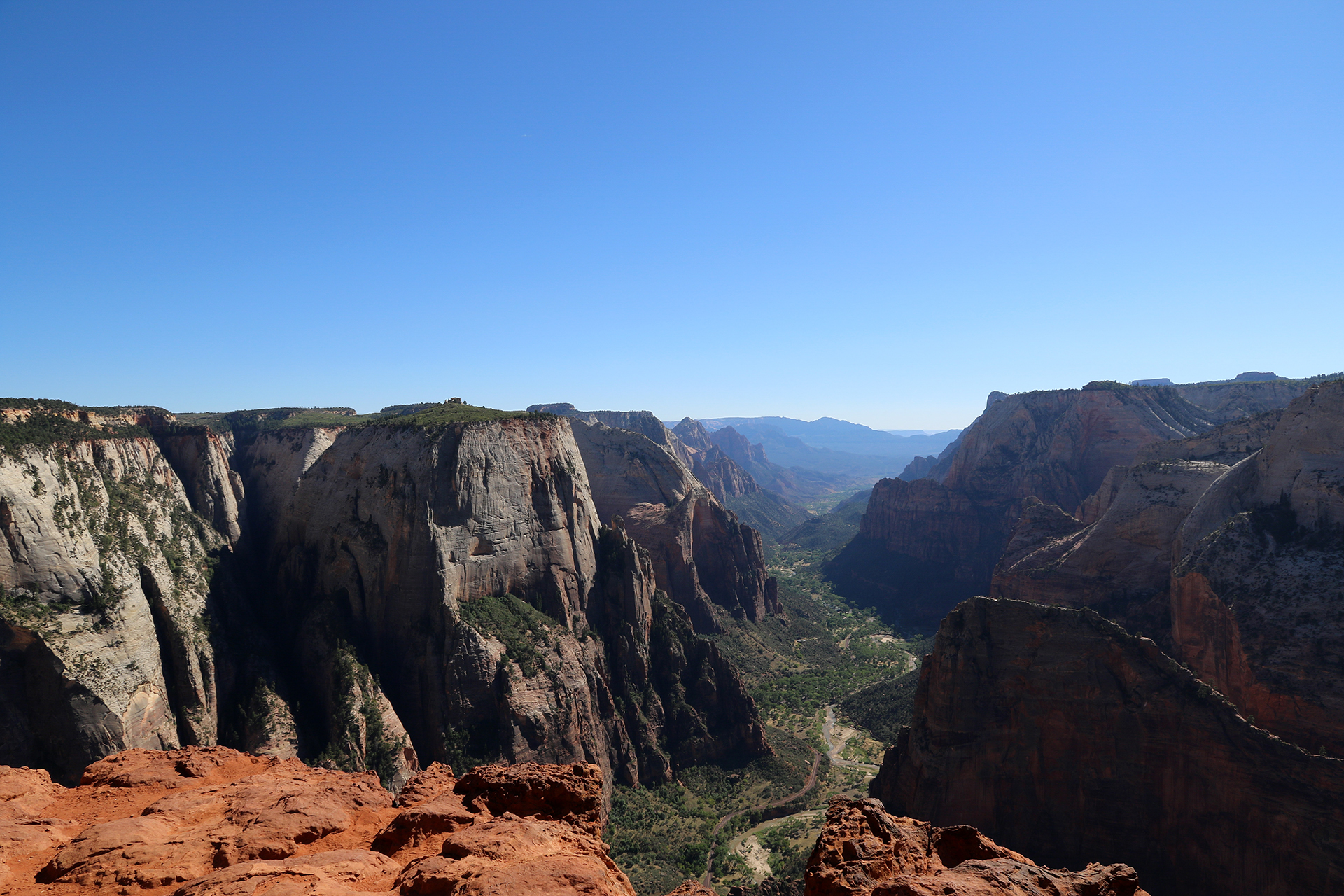 After lunch on September 15, we weren’t quite finished yet with Zion National Park. That night, we’d be camping on the North Rim of the Grand Canyon, but before heading south to our final stop on the Grand Staircase, we had one more Zion adventure complete: East Mesa Trail.  The out-and-back trail is a three-mile one-way route to Observation Point across relatively flat country from the eastern Park boundary to the rim. Unlike Yosemite National Park, where the road to Glacier Point offers views from the rim to thousands of people a day, all of the rim views at Zion must be earned by hiking.

Once more we entered the Park by the south entrance. We drove up the switchbacks of the south wall of Pine Creek Canyon and at the top waited in line to proceed through the Zion-Mount Carmel Tunnel. 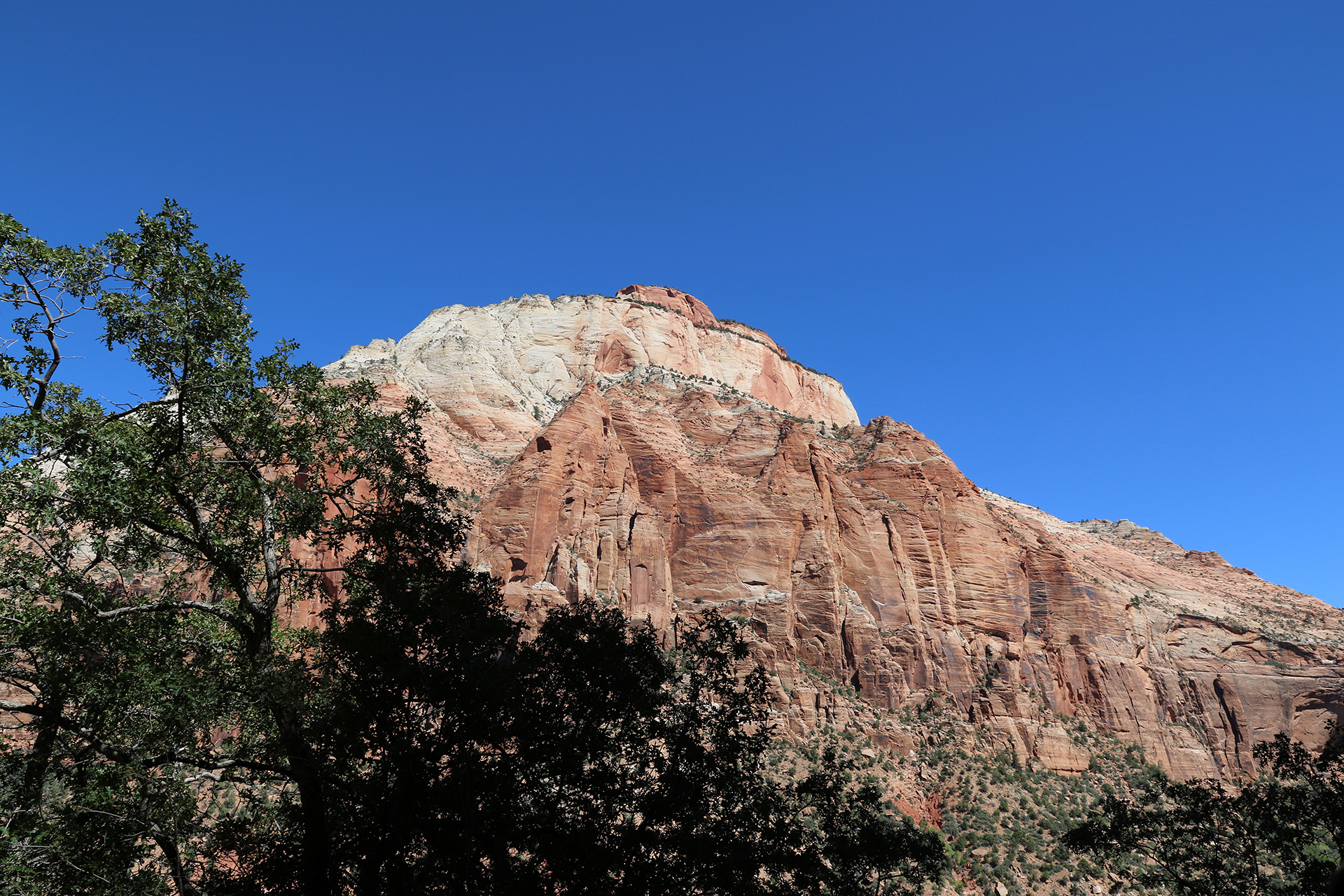 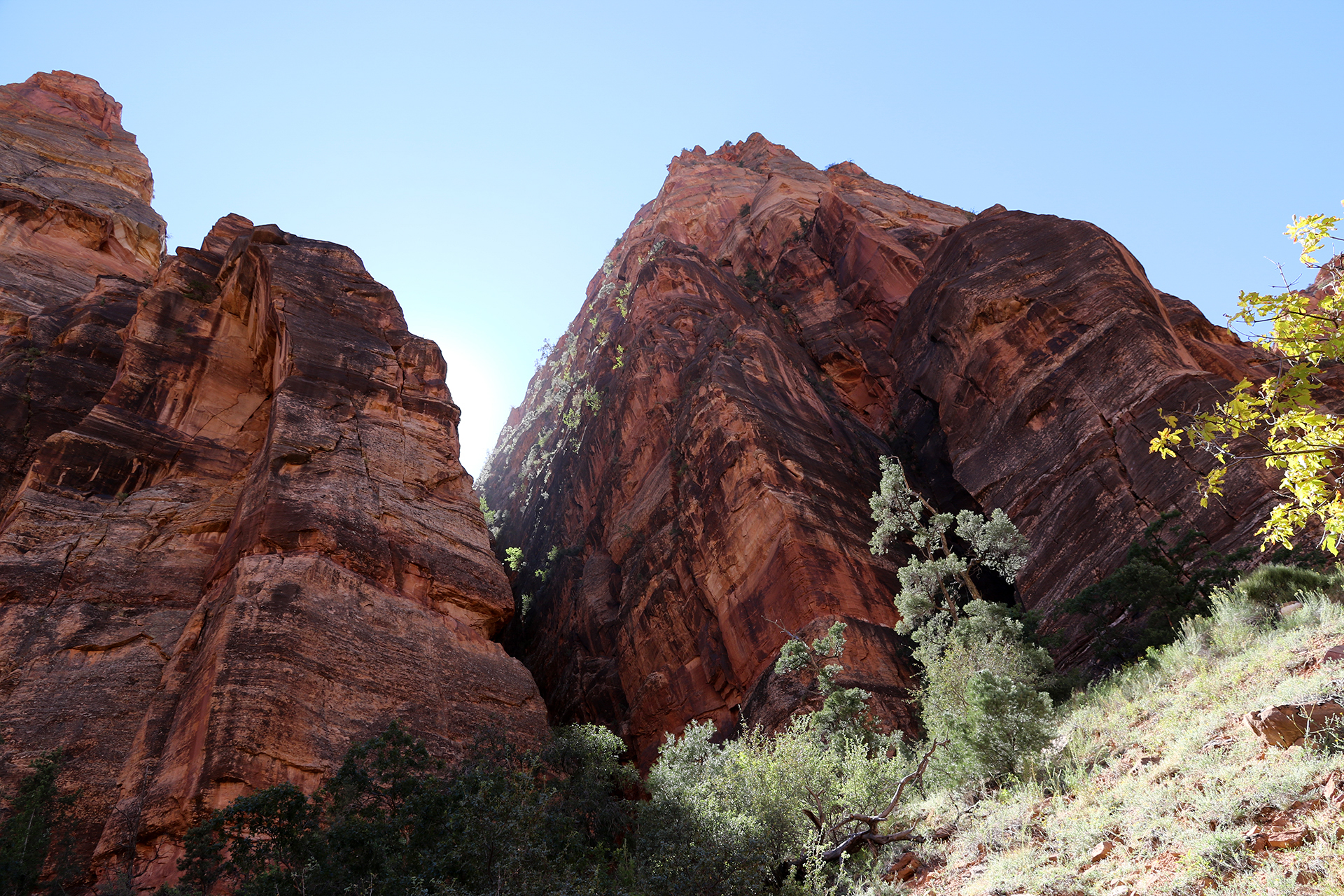 Headed east along the Zion-Mount Carmel Highway after the tunnel, we were in a line of vehicles, so it never quite felt opportune to pull over to take a photo or two. Even when a herd of Bighorn Sheep was moving across the mesas near the highway, the camper behind us felt too close to slow down safely. So no photo. But we did indeed see a herd of Bighorns in Zion.

We drove out of the Park at the east entrance and shortly turned north, ultimately making our way to the Zion Ponderosa Ranch resort. We drove through the ranch and made several more turns of steadily worsening roads until we cam to the primitive parking area for the East Mesa Trailhead. 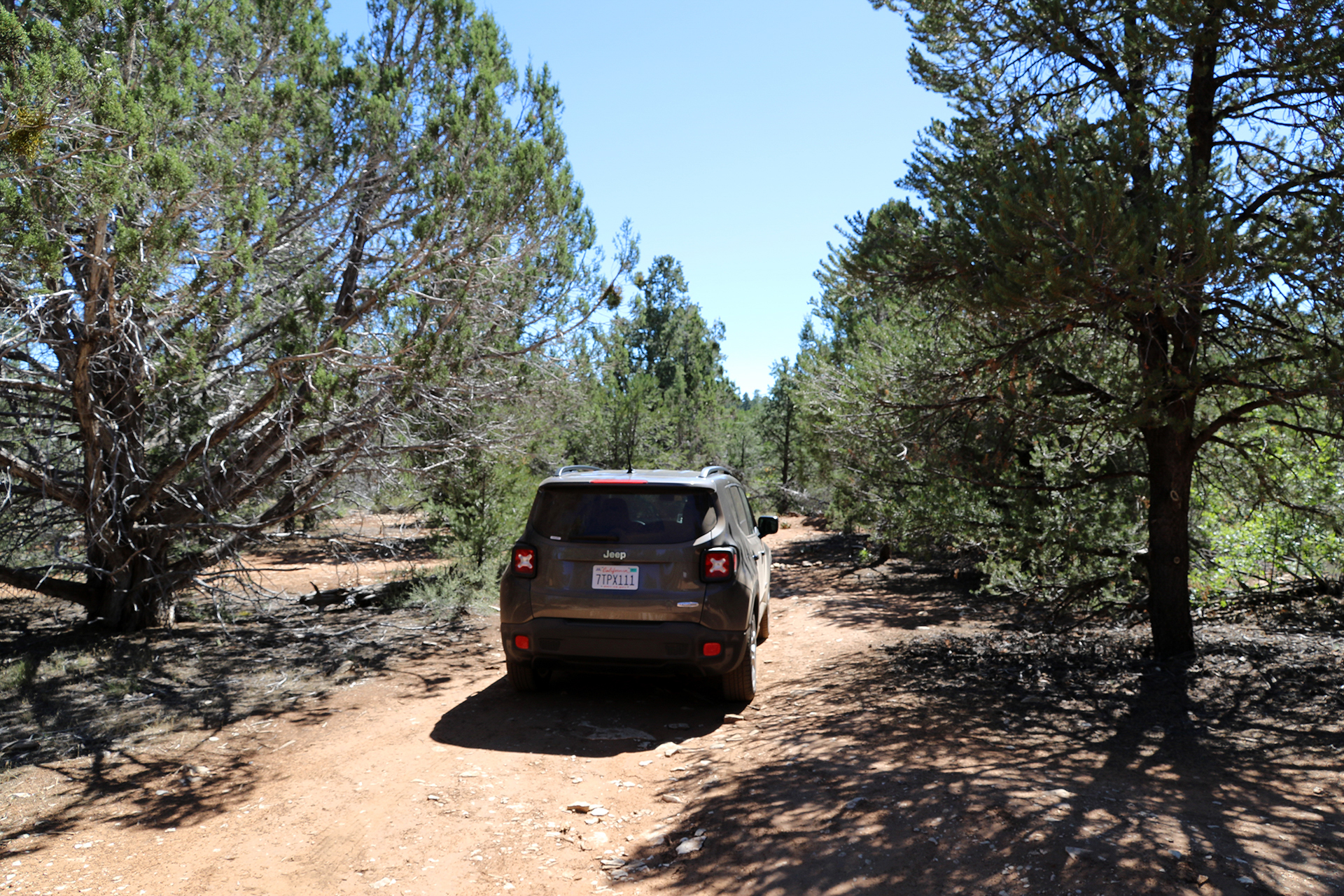 The parking area was on Bureau of Land Management land just outside the Zion National Park Boundary. After shouldering our packs, we passed through a split-rail gate to reenter Zion.

The trail led through an open forest of Ponderosa Pine with an understory of oak and manzanita. Some of the area had burned in 1995, and many of the trees still showed scorch marks.

Ponderosa Pines with the Pink Cliffs and the Grey Cliffs

The hike began at 6,500 feet, climbed gently about three-hundred feet, and then steadily dropped back to 6,500 feet at the canyon rim. To the north, beyond Orderville Canyon, we could see sections of the Pink and Grey Cliffs. 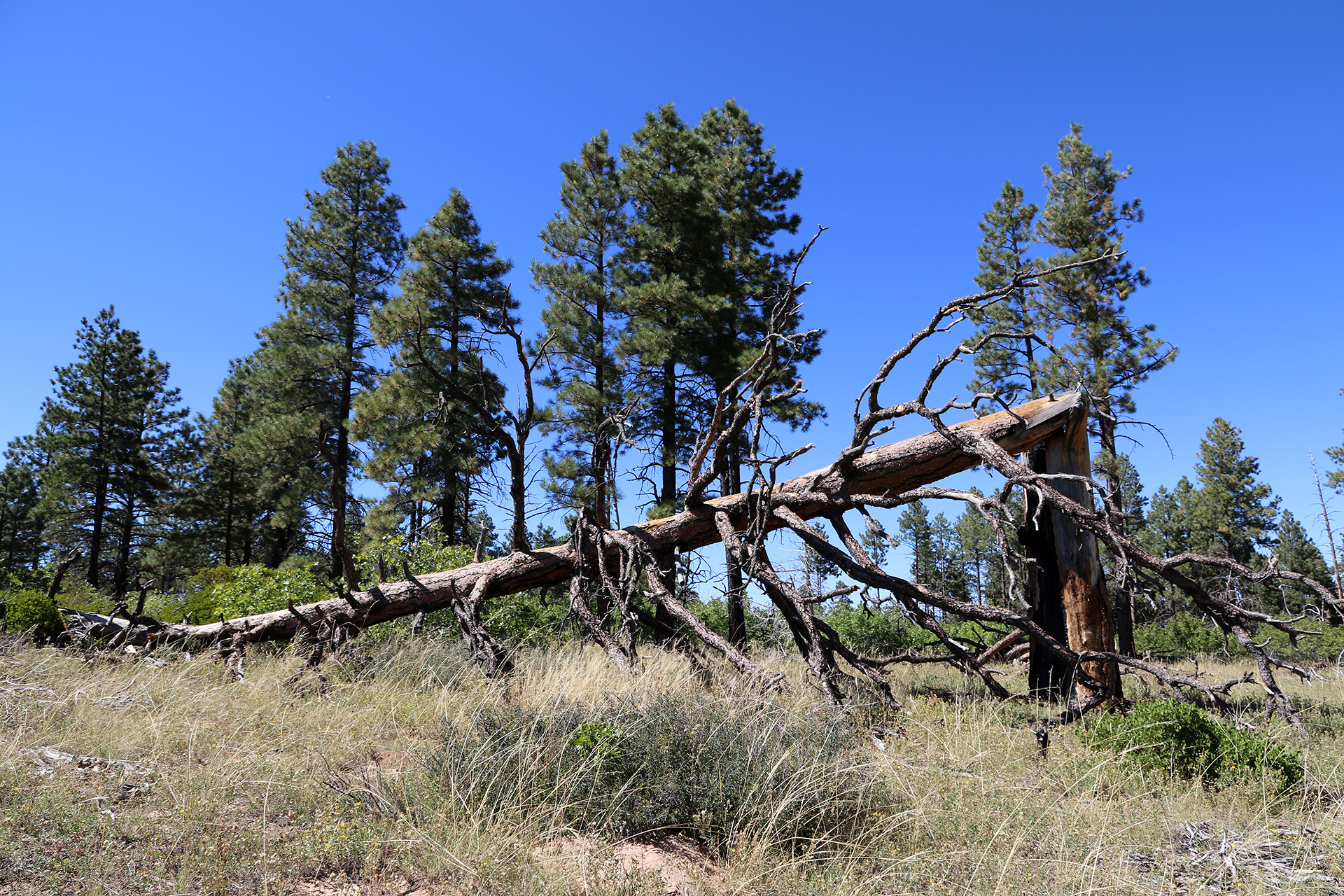 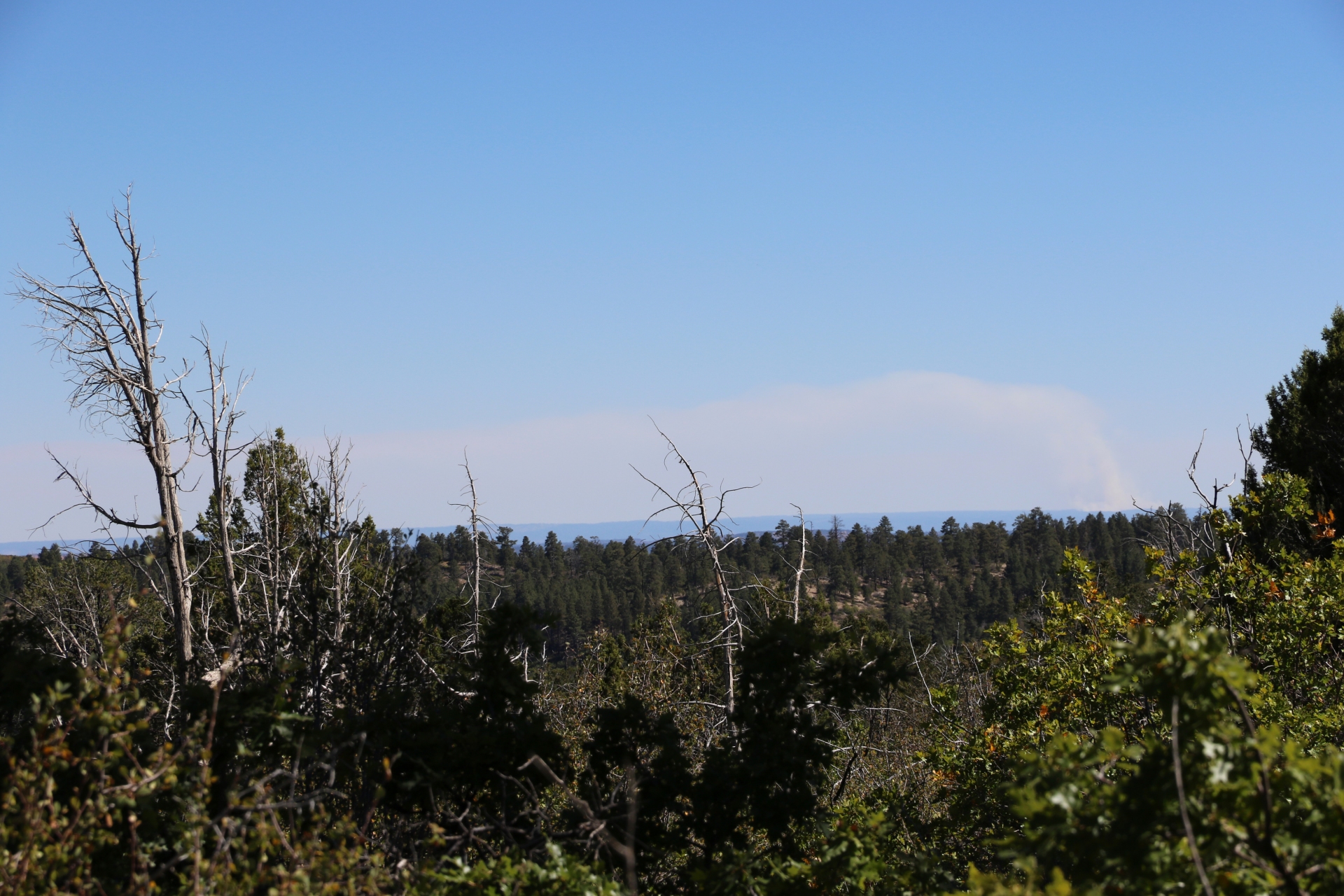 To the south on this almost cloudless day, we noticed the smoke of the Fuller Fire, burning on the Kaibab Plateau. The fire began near Point Imperial in Grand Canyon National Park with a lightning strike on June 29 and ultimately burned over 14,000 acres, mostly in Kaibab National Forest. Later on, we’d be driving past it to reach the North Rim. 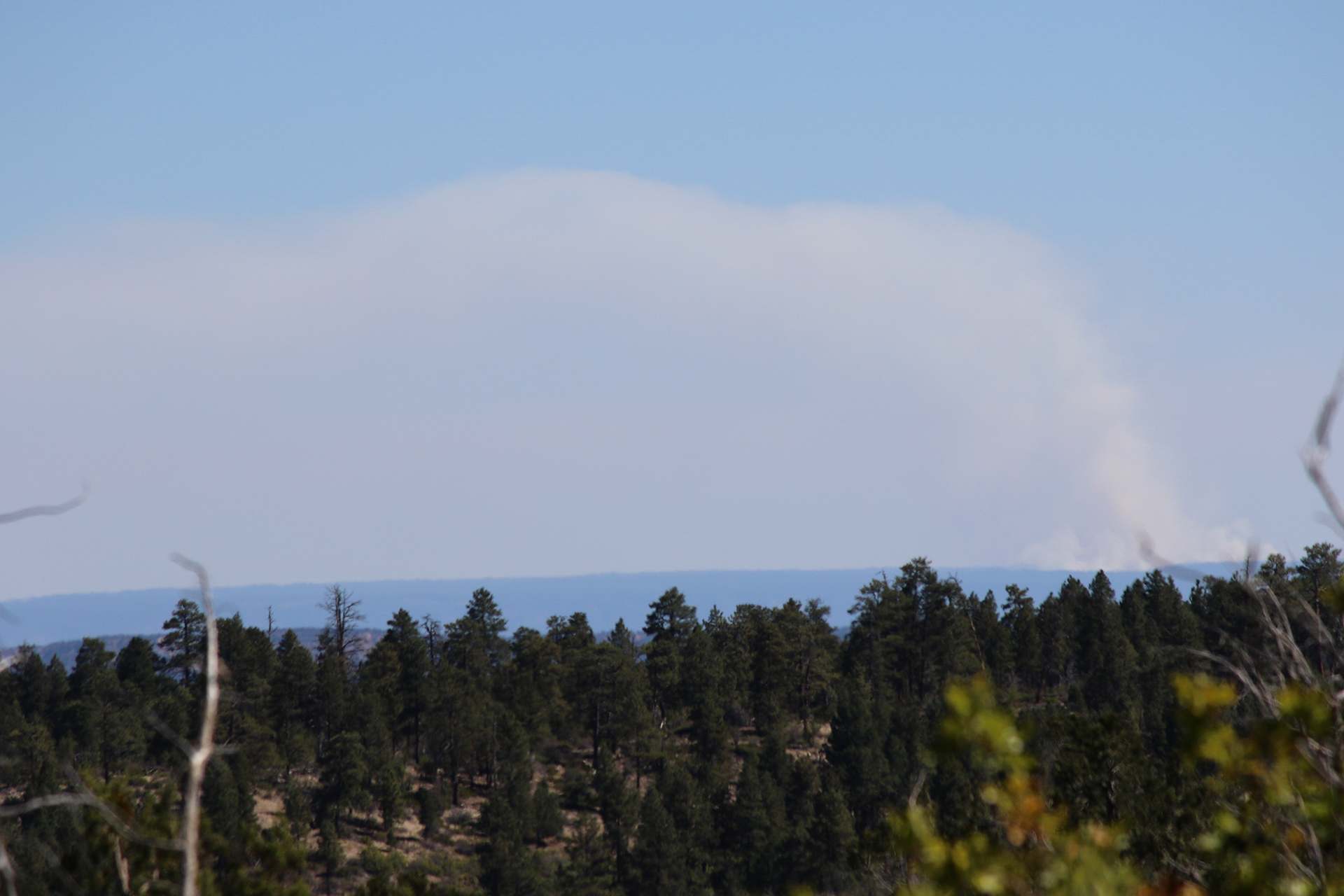 Farther along, we came upon a daypack and hiking poles. It was a little creepy because they felt abandoned. We made a note of where they were so we could watch for them on the way back. If they were still there and no one was around, we would alert the Park.

The pack felt mysterious because there were so few other people on the trail. We’d only met one pair of hikers going the other way just as we started out on our hike.

The trail swung south, and we began to get our first glimpses of Zion Canyon. 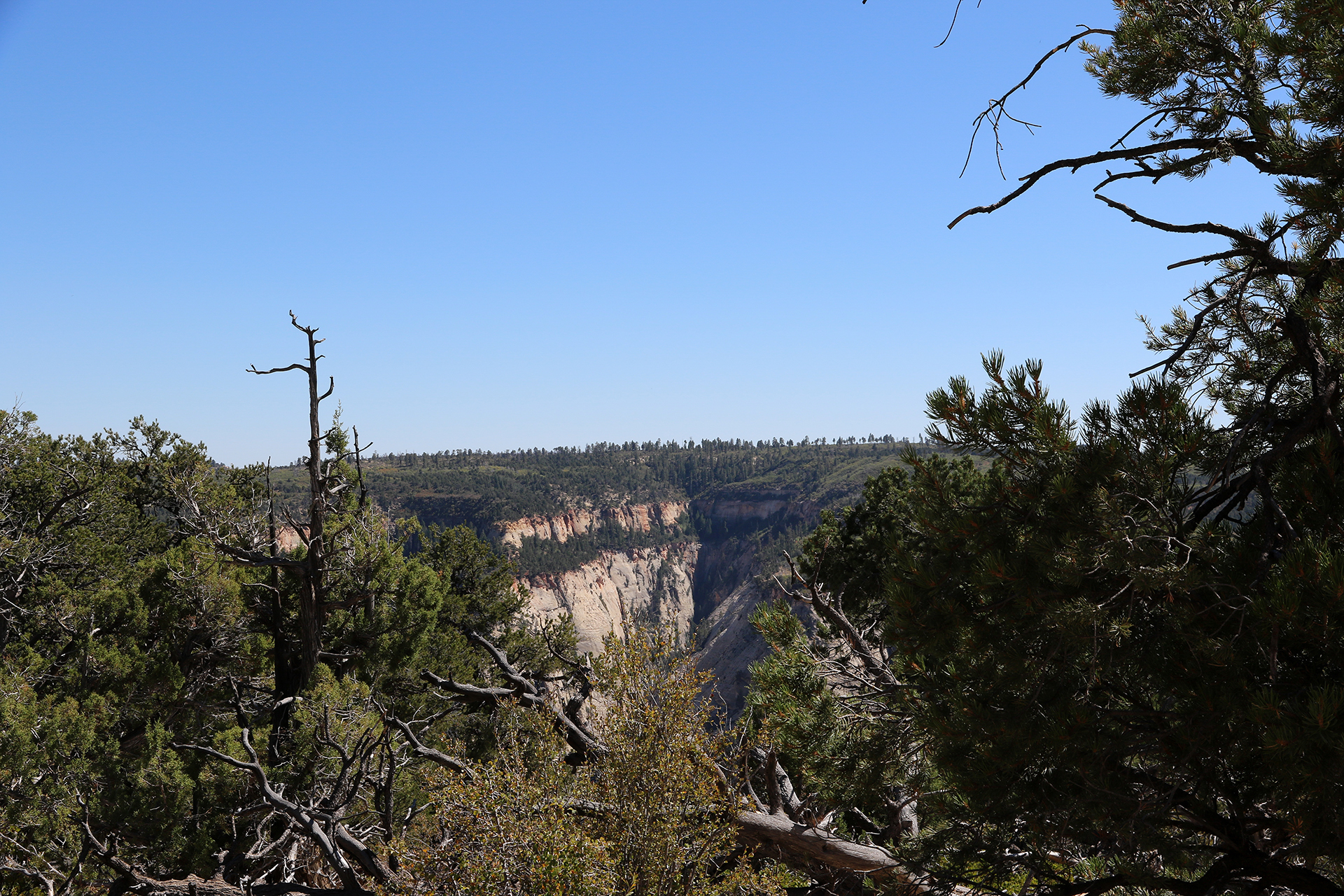 The upper reaches of Echo Canyon became visible to our left (southeast).

After the “Closed to Horses” sign, the trail turned gravelly and began descending. We were now on a peninsula of mesa surrounded Echo Canyon, the main part of Zion Canyon, and the Temple of Sinawava and the lower reaches of the Narrows. 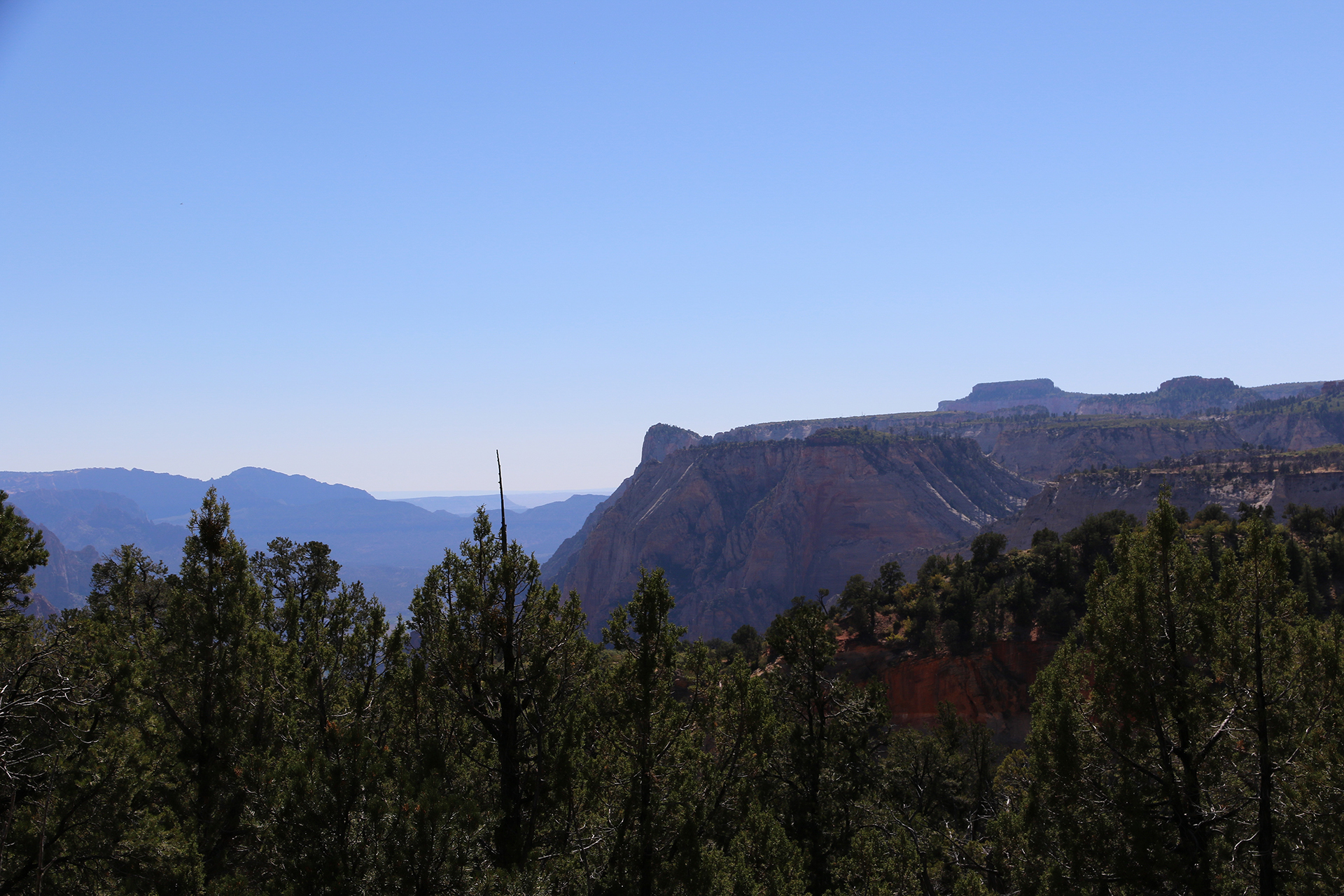 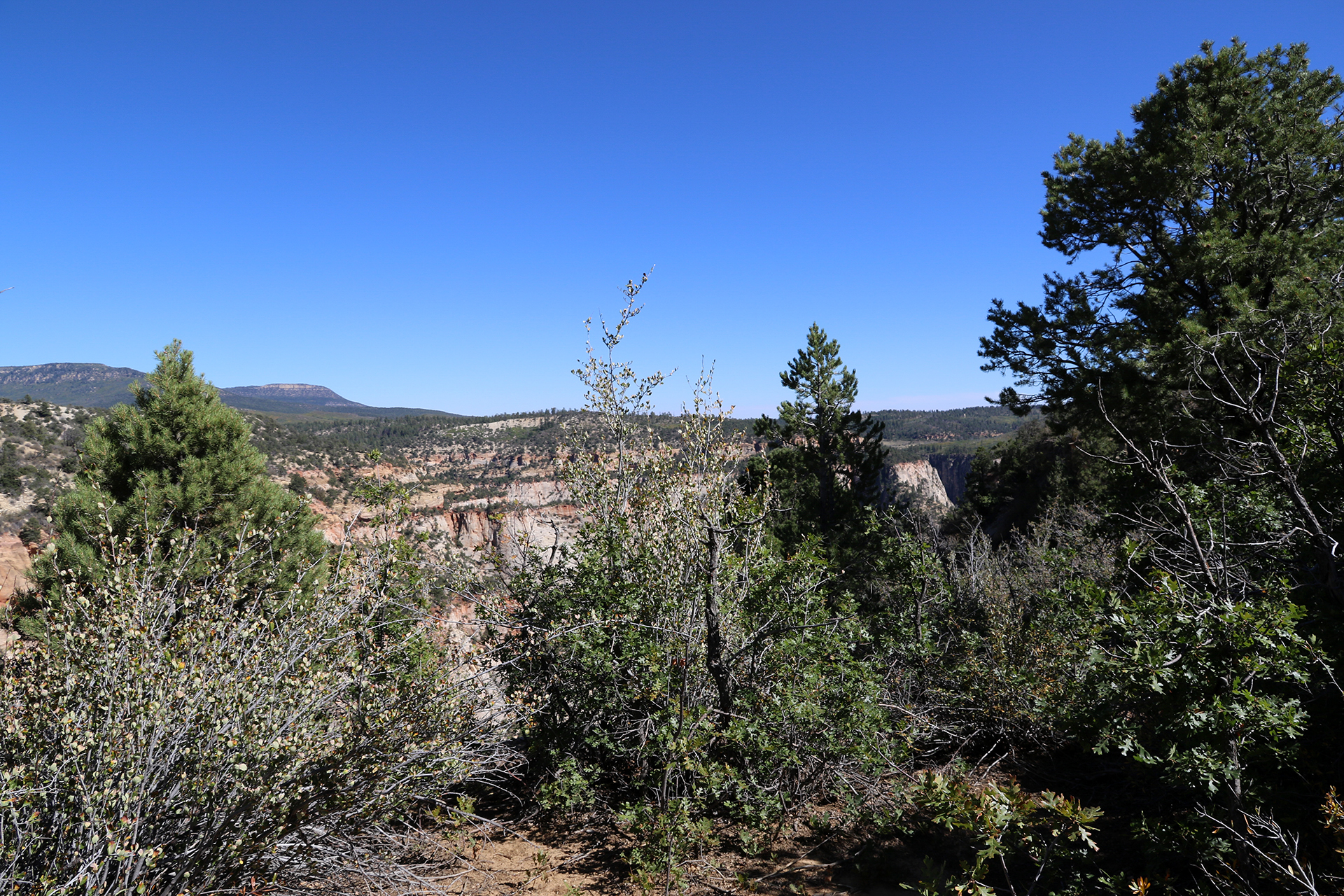 We left the trail and walked a short way toward Echo Canyon, but we were careful to stay well back from where the edge might be.

To the west, a small peak stood at just over 6,700 feet, some 2,200 feet above the Temple of Sinawava shuttle stop almost directly below.

The final half mile of the trail, now headed in earnest south to Observation Point, had transitioned from open forest to open scrub, dominated by manzanita. 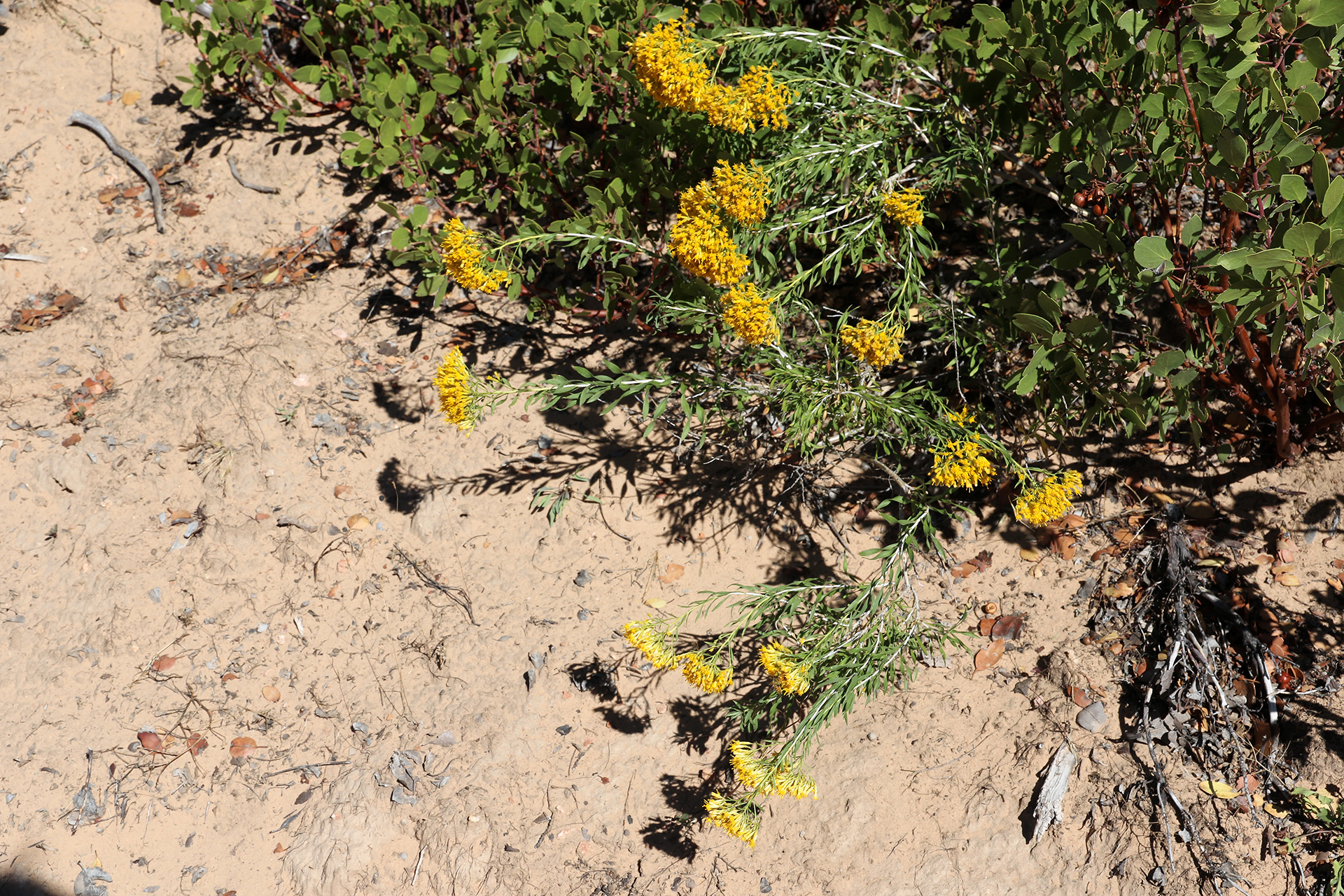 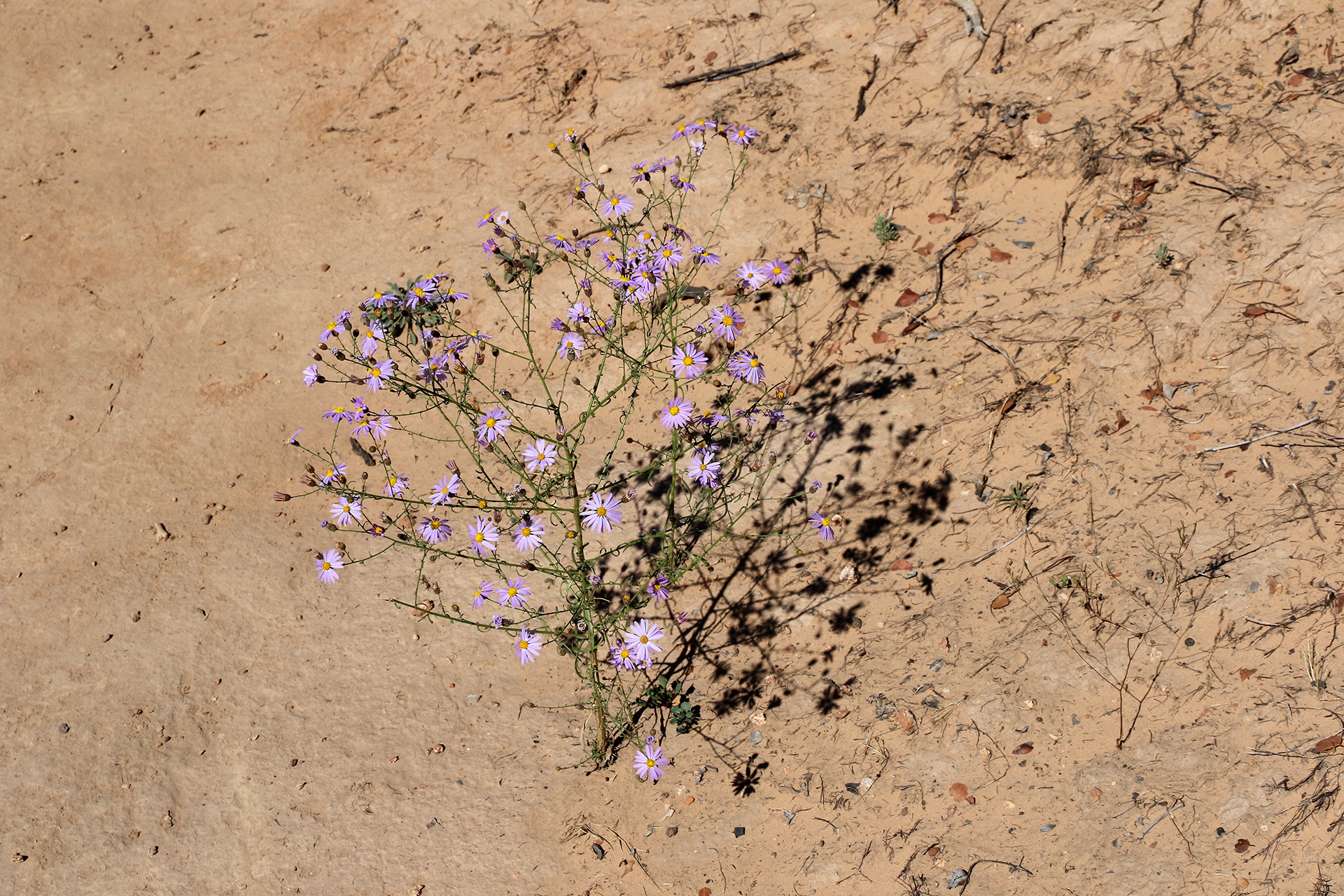 The trail passed the intersection with the trail down to Weeping Rock, 2,100 feet below. We bore right to reach the viewpoint. 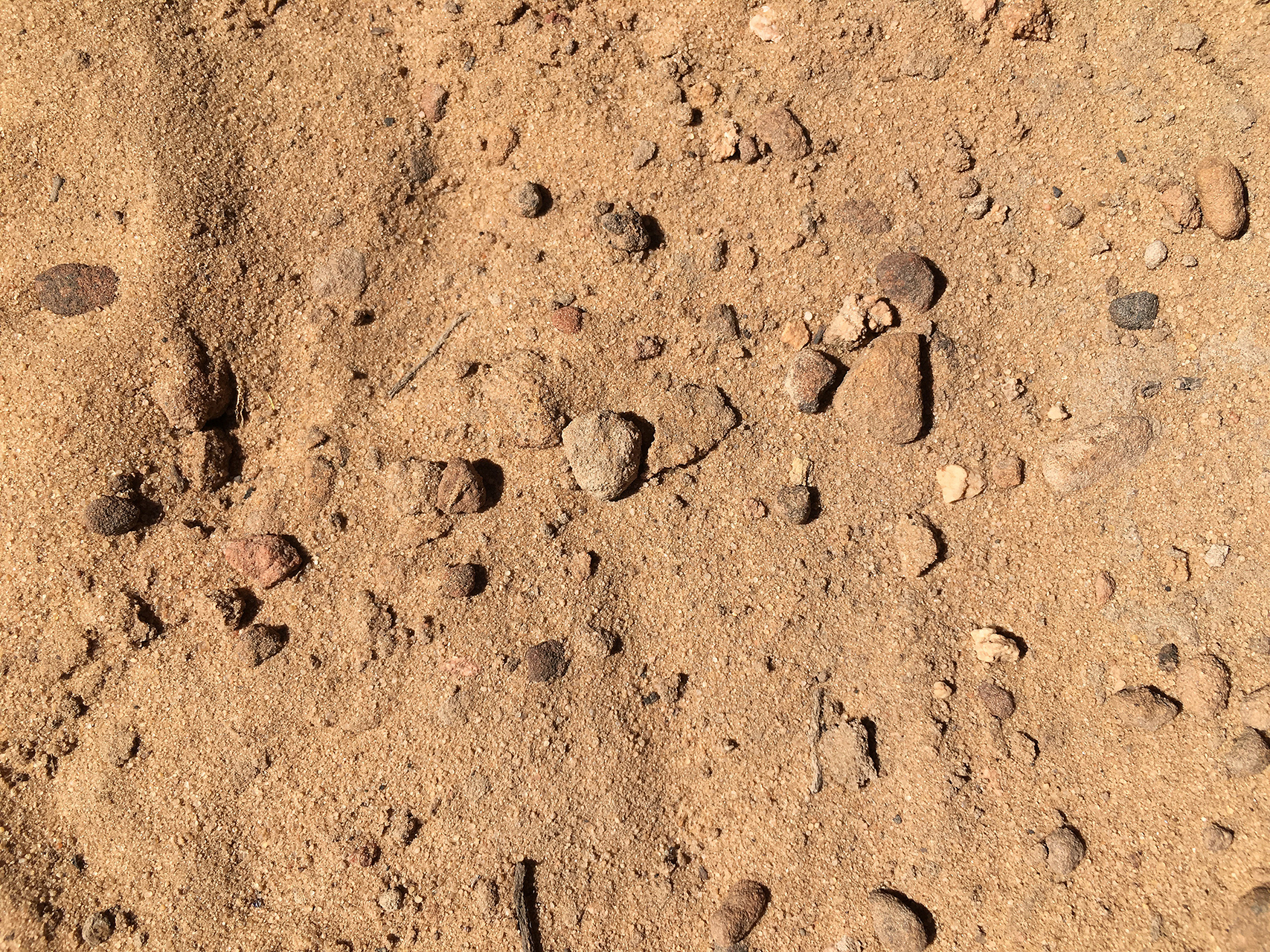 The trail was now quite sandy as we stood atop the famous Navajo Sandstone of Zion National Park. 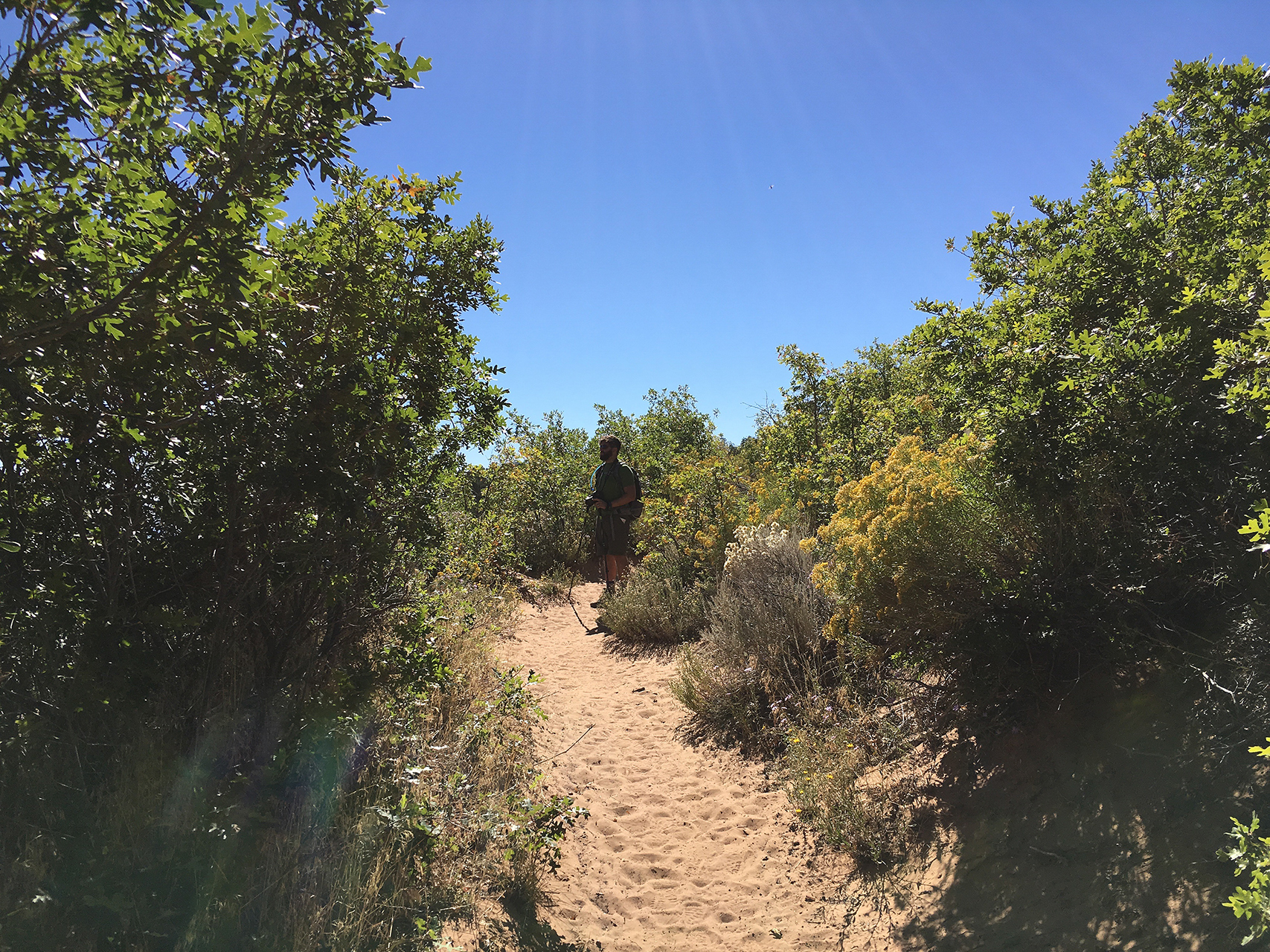 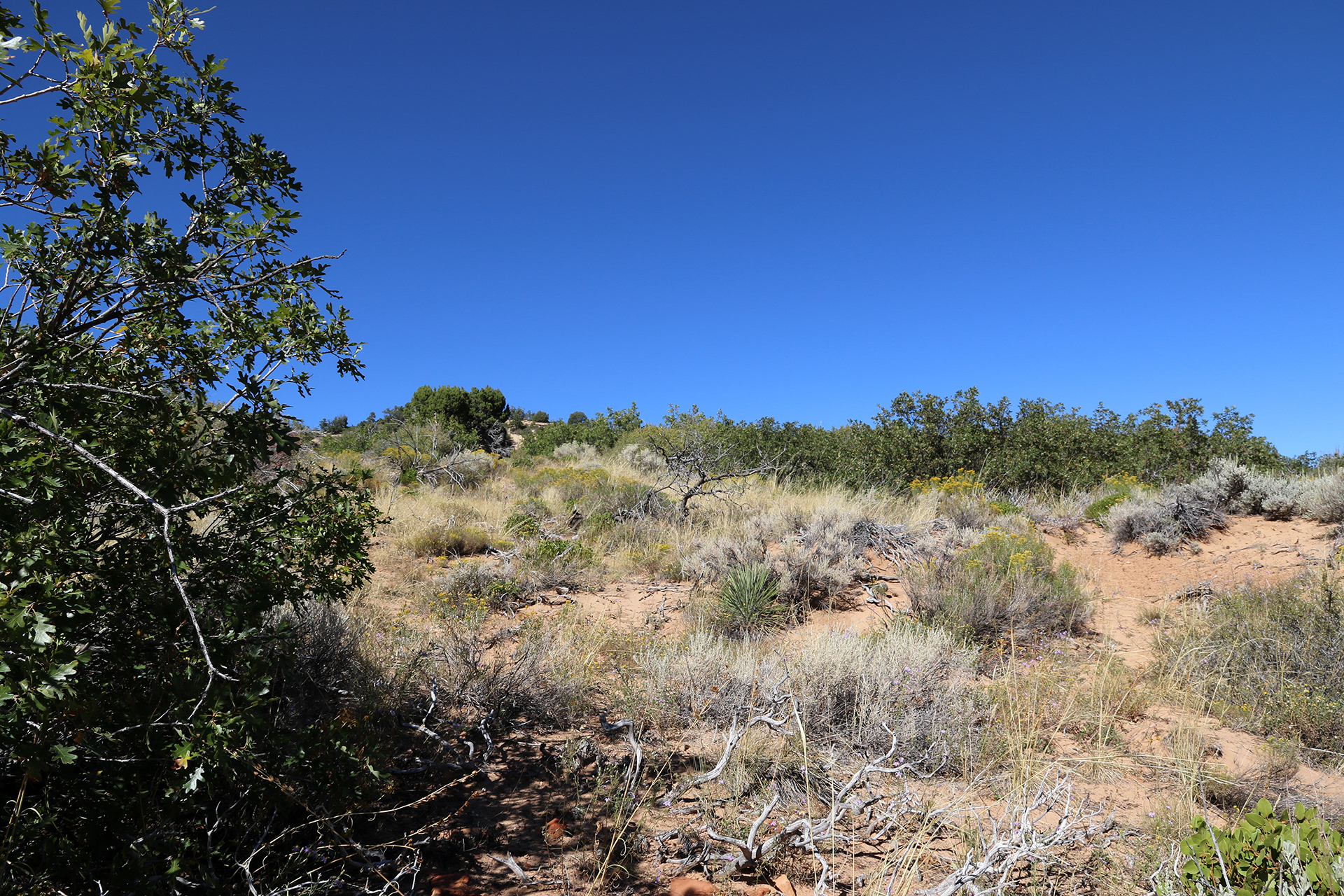 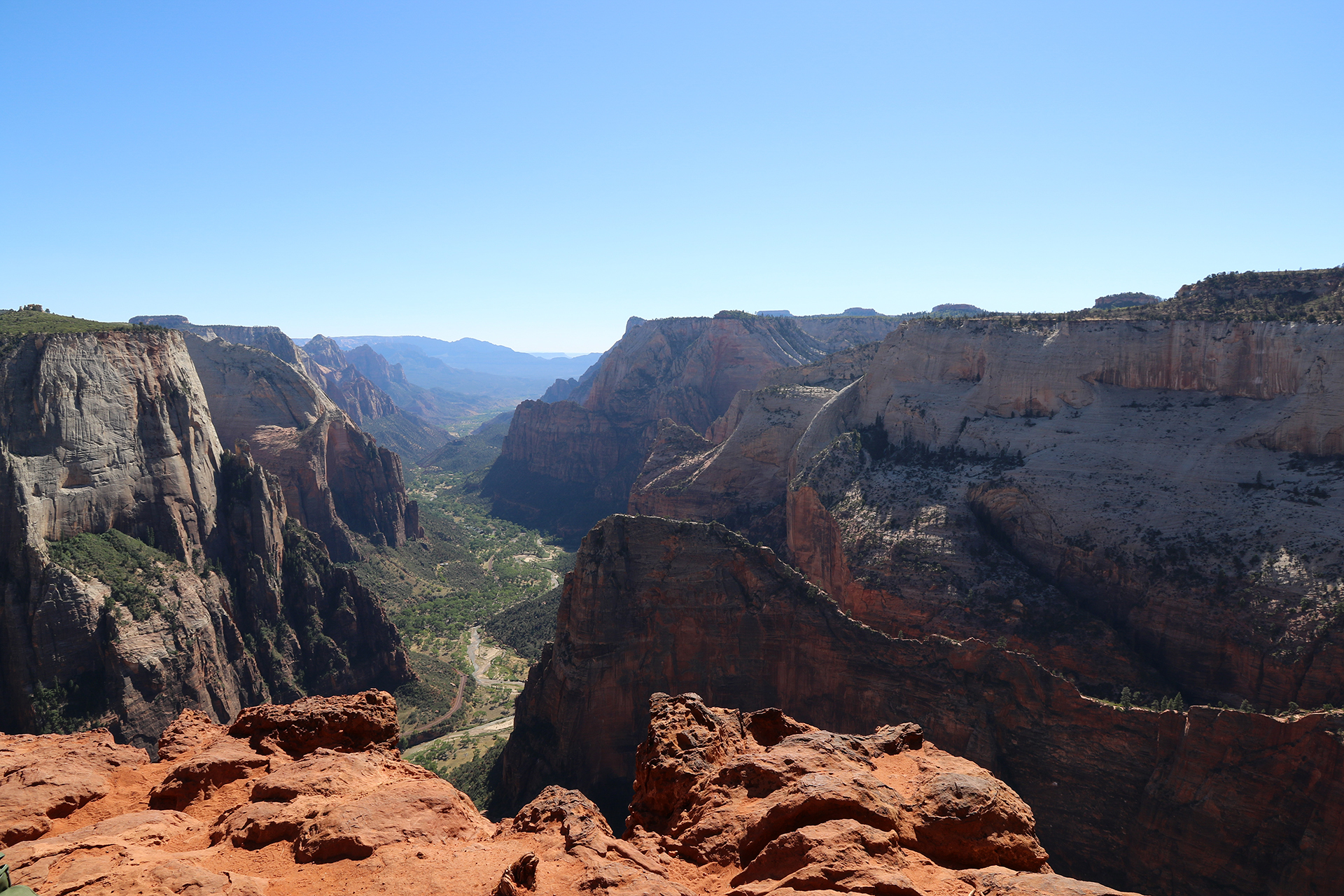 And suddenly we were there, greeted by an epic southerly view down through the heart of Zion Canyon. The Great White Throne was across Echo Canyon on the left. We were less than 250 feet below its summit, so we could see its crewcut of pine forest. The long fin of Angels Landing was over 700 feet below us. 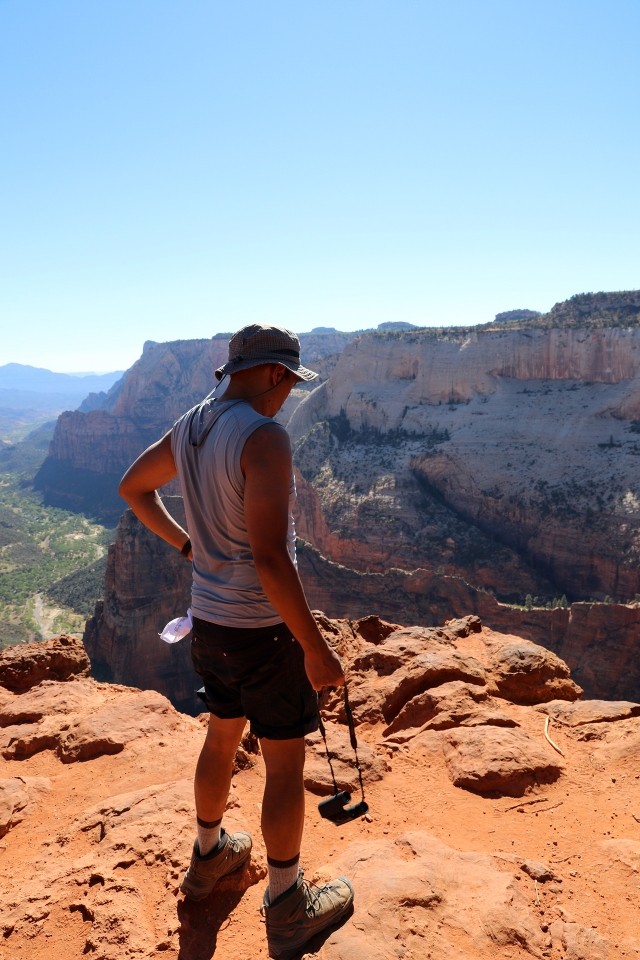 Red Arch Mountain in profile looked completely different, and far more dramatic, than it had from across the canyon near Emerald Pools. 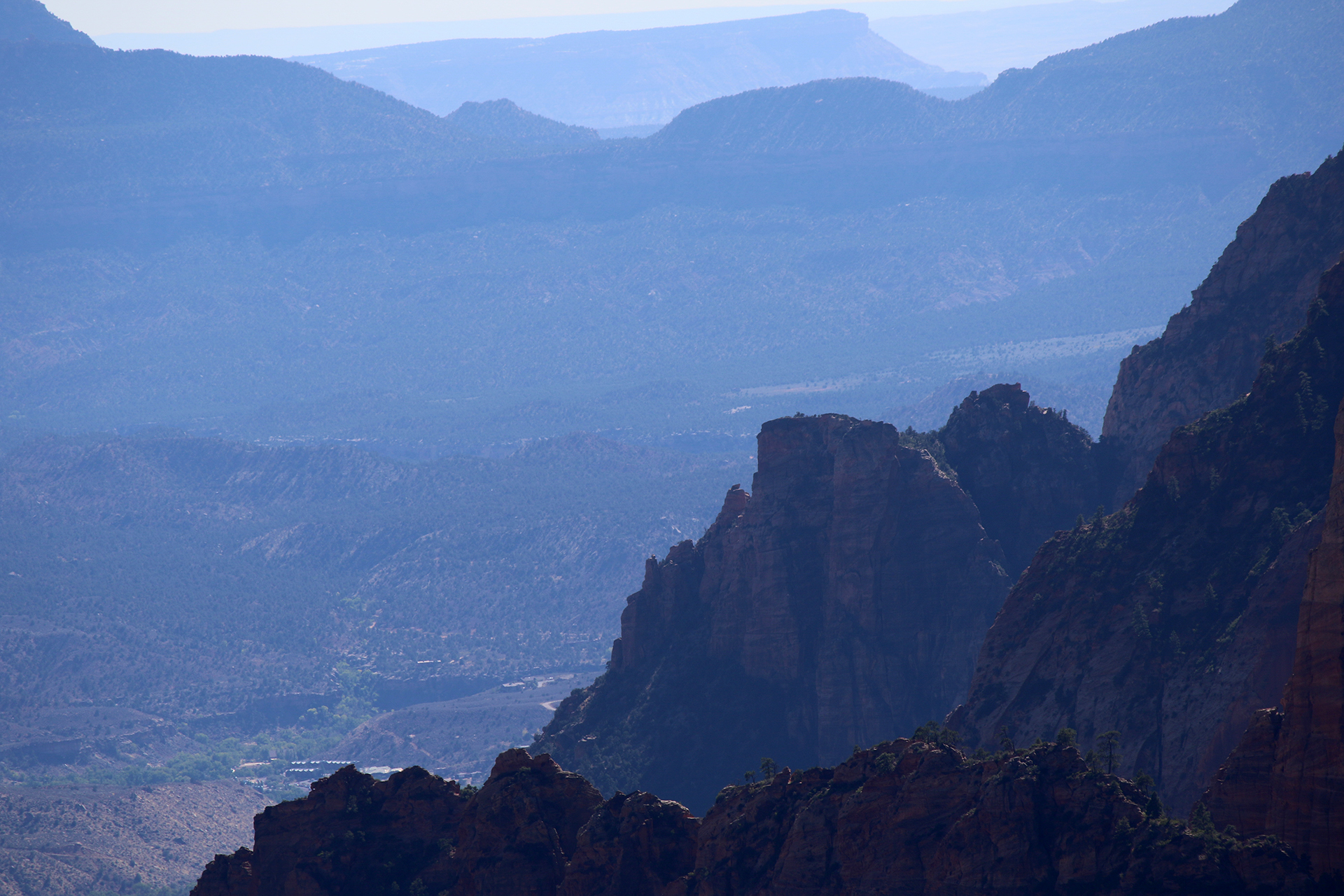 There were several other hikers enjoying the view with us. One woman was telling the story of going up Angels Landing the previous day. She related how the worst part of the hike was the other hikers, some of whom would push around slower going hikers. Her assessment was that if you could do it when there were few others, it was a good hike, but it wasn’t worth doing with a mass of inconsiderate people. Others at the viewpoint were telling stories of hiking and camping adventures or sharing memories of Zion or Alaska or other parts of Utah.

We sat and had a snack, listening and taking in the view. Whether a hiker came up from Weeping Rock or across East Mesa, this view took some time and effort to reach. It’s the sort of view that would be thronged with motorists were there a road to it, but it is all the more special in that there isn’t one. 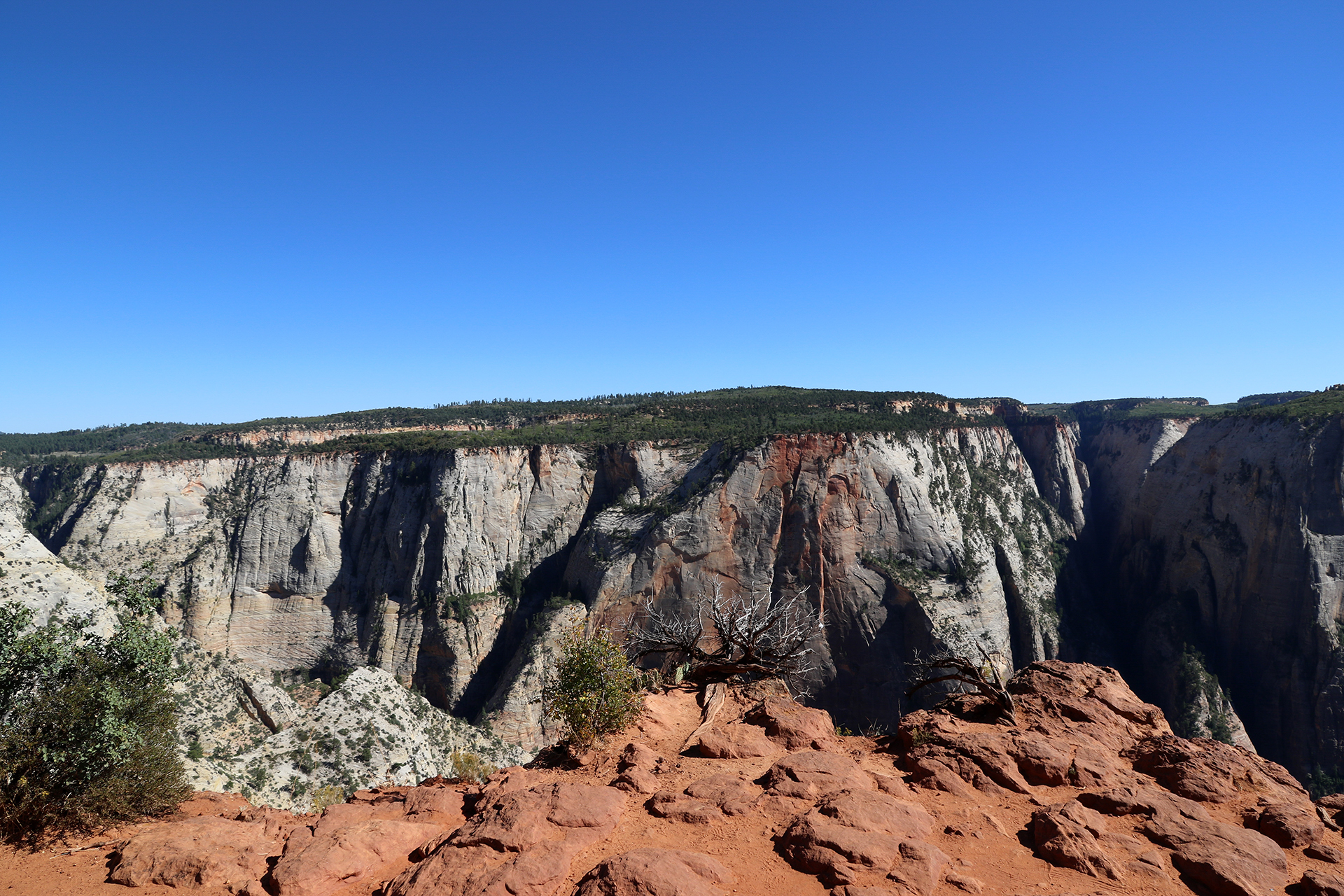 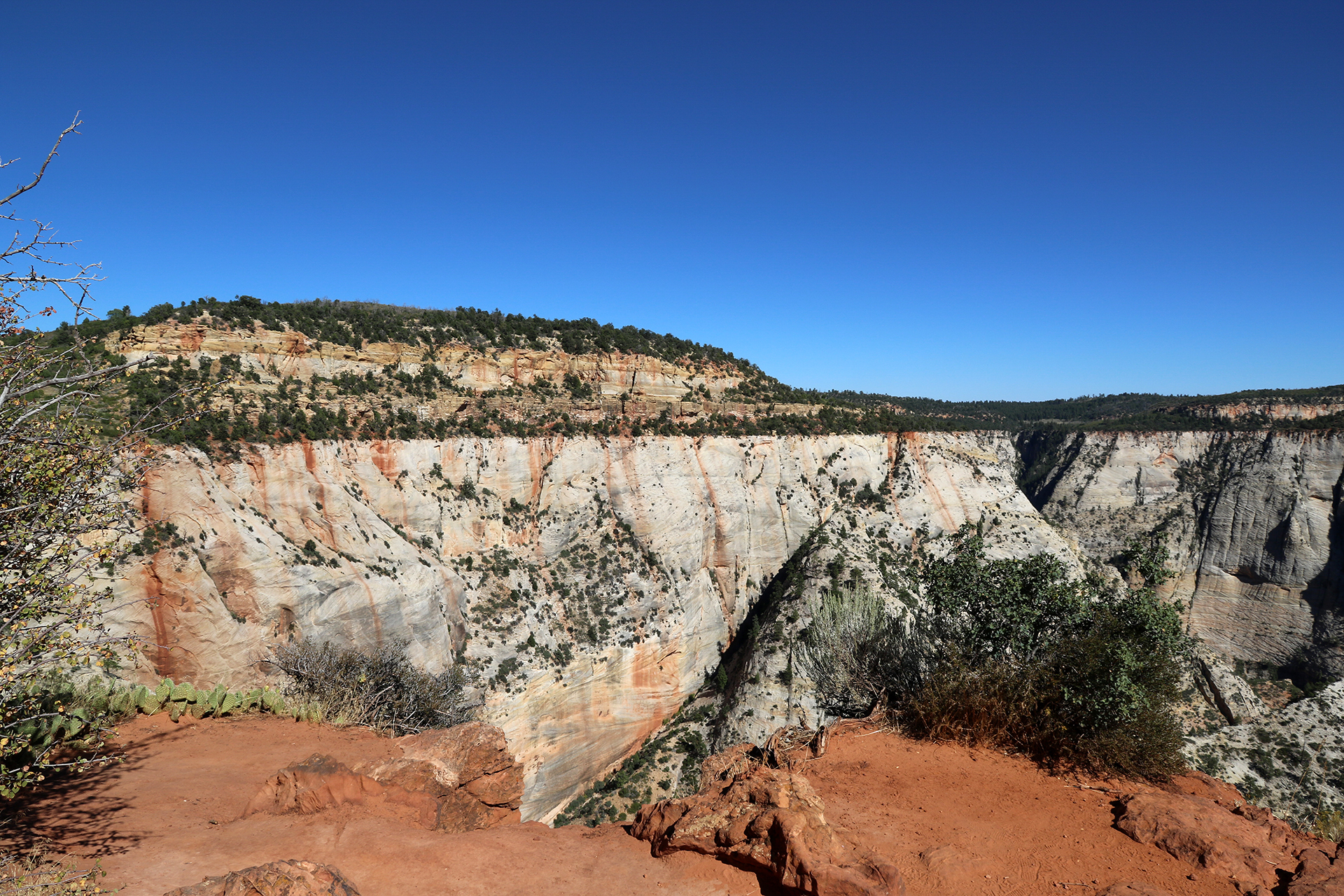 It was glorious to take in all that rock laid down in a vast sea during the Jurassic Period, exposed by a seemingly small river far below.

With binoculars or my telephoto lens, we could pick out hikers on Angels Landing. The sun illuminating the thin edge of the fin of rock emphasized its narrowness. 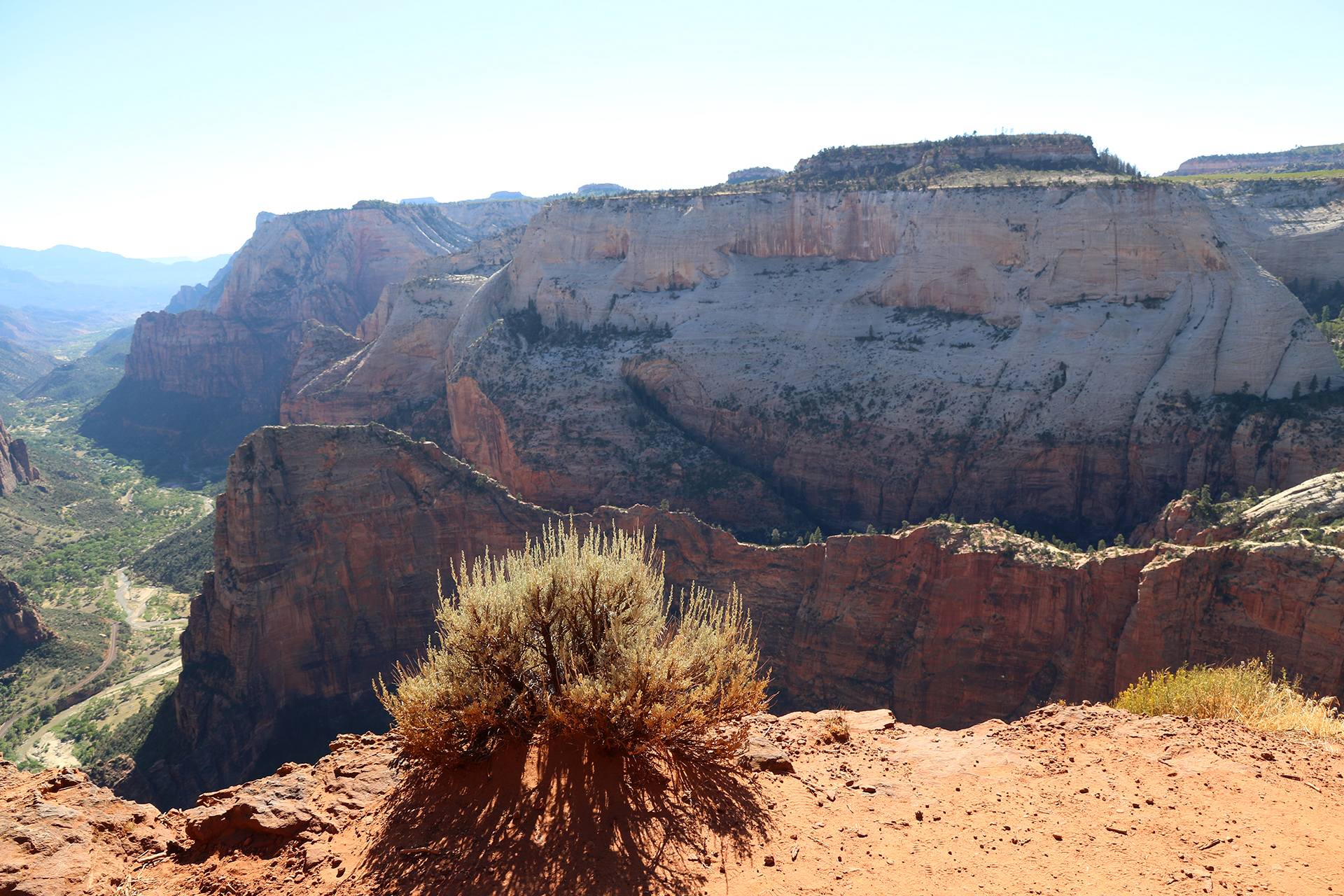 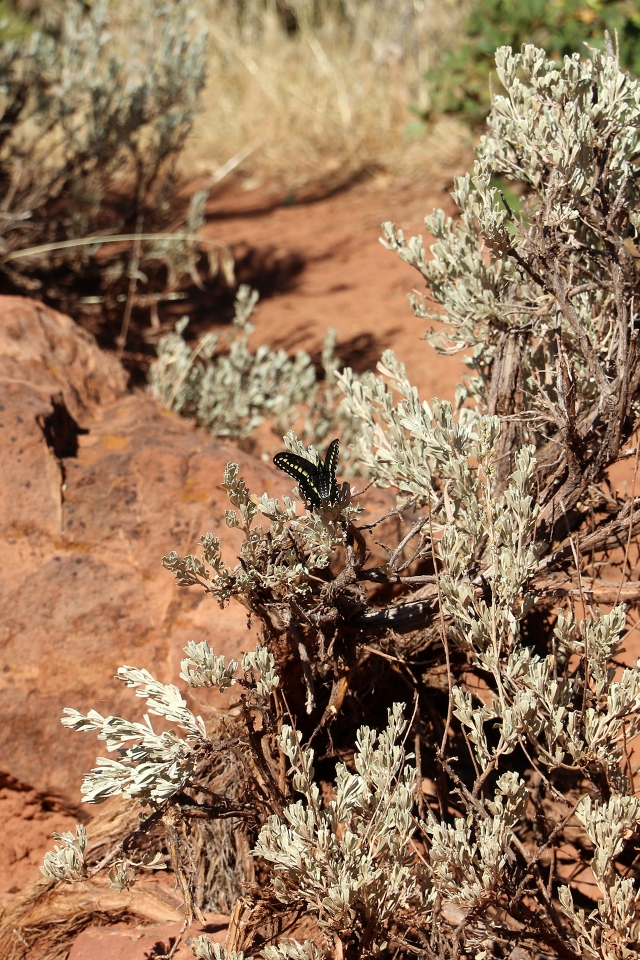 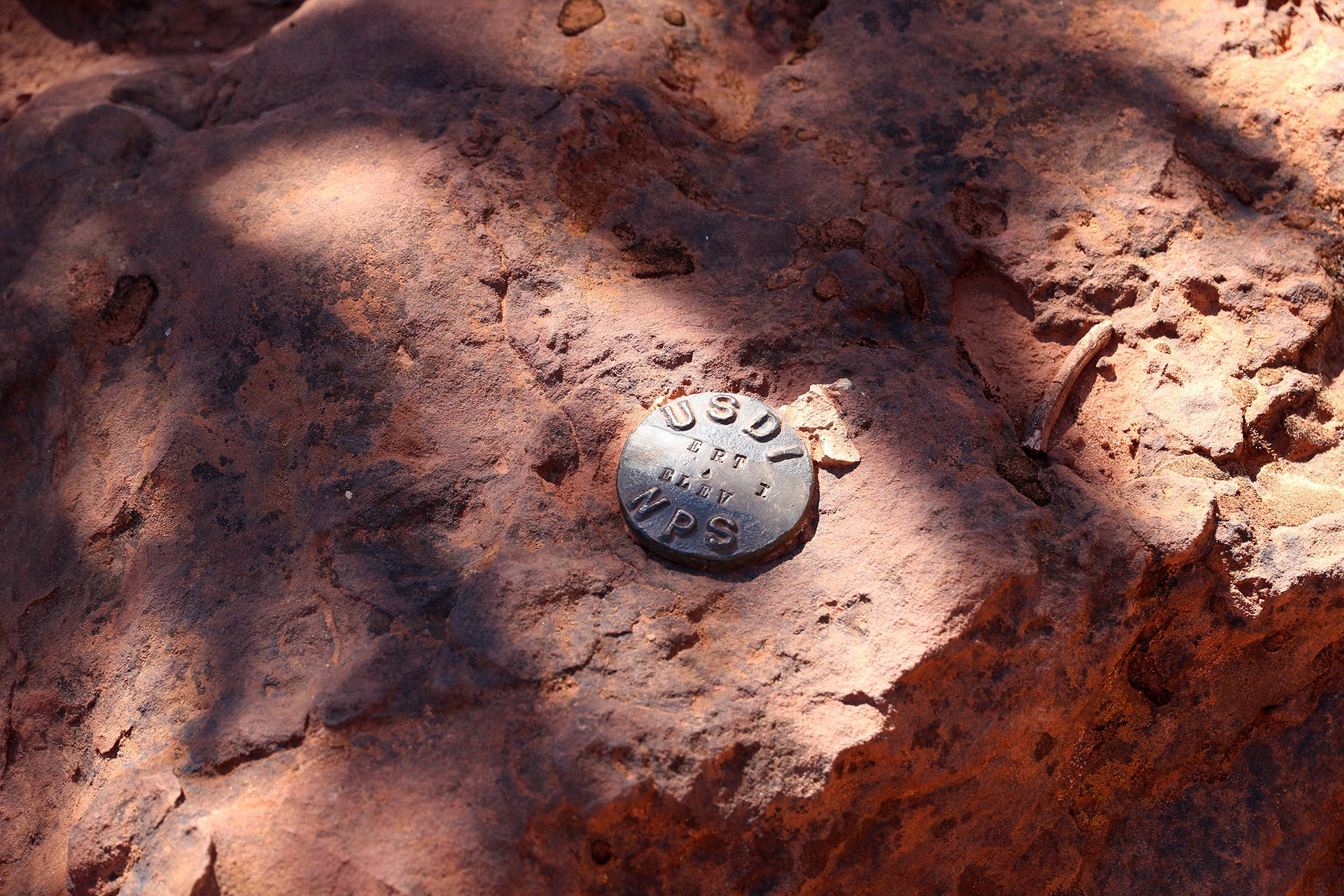 We spent half an hour at Observation Point before we turned our backs to Zion Canyon and began the return hike. 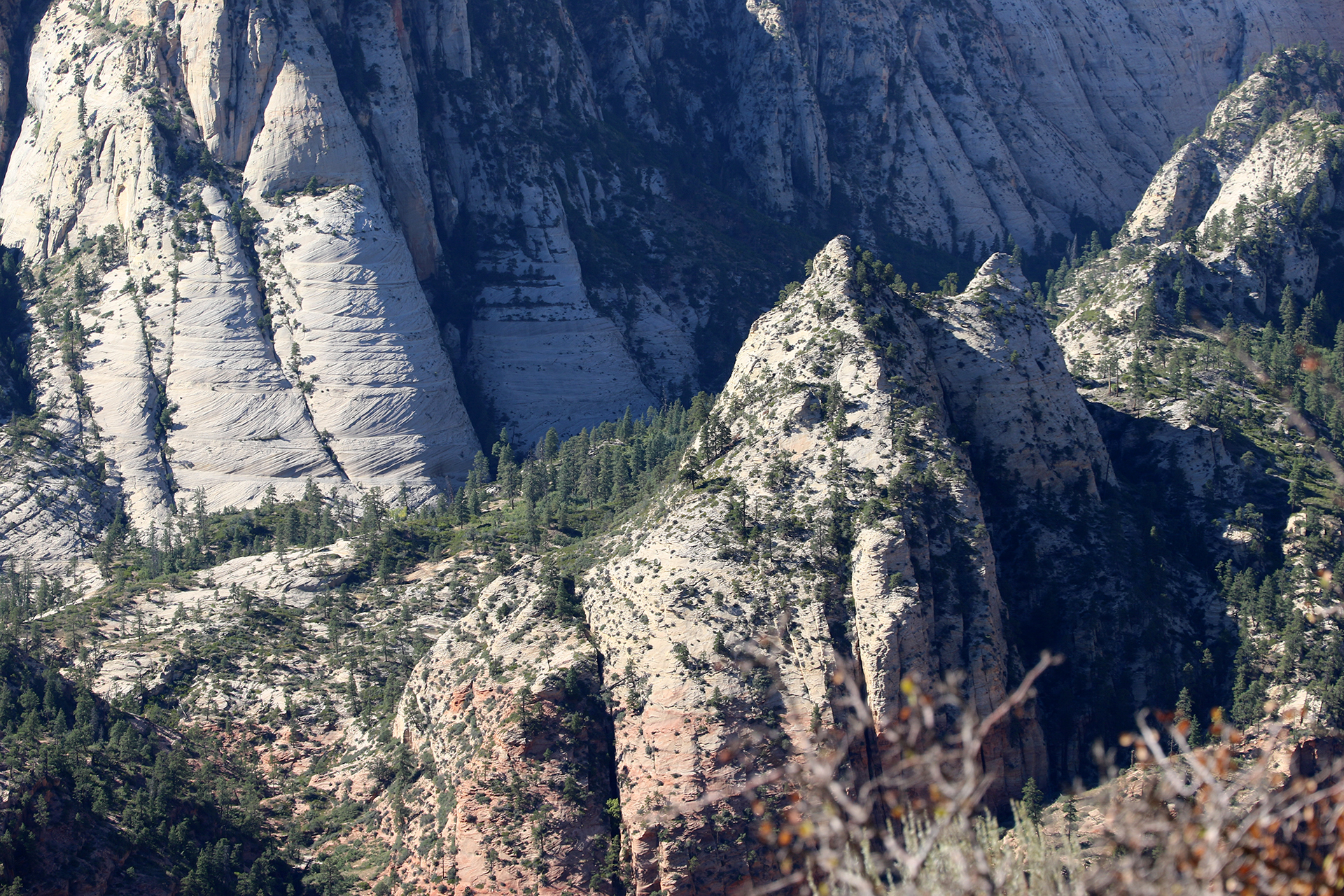 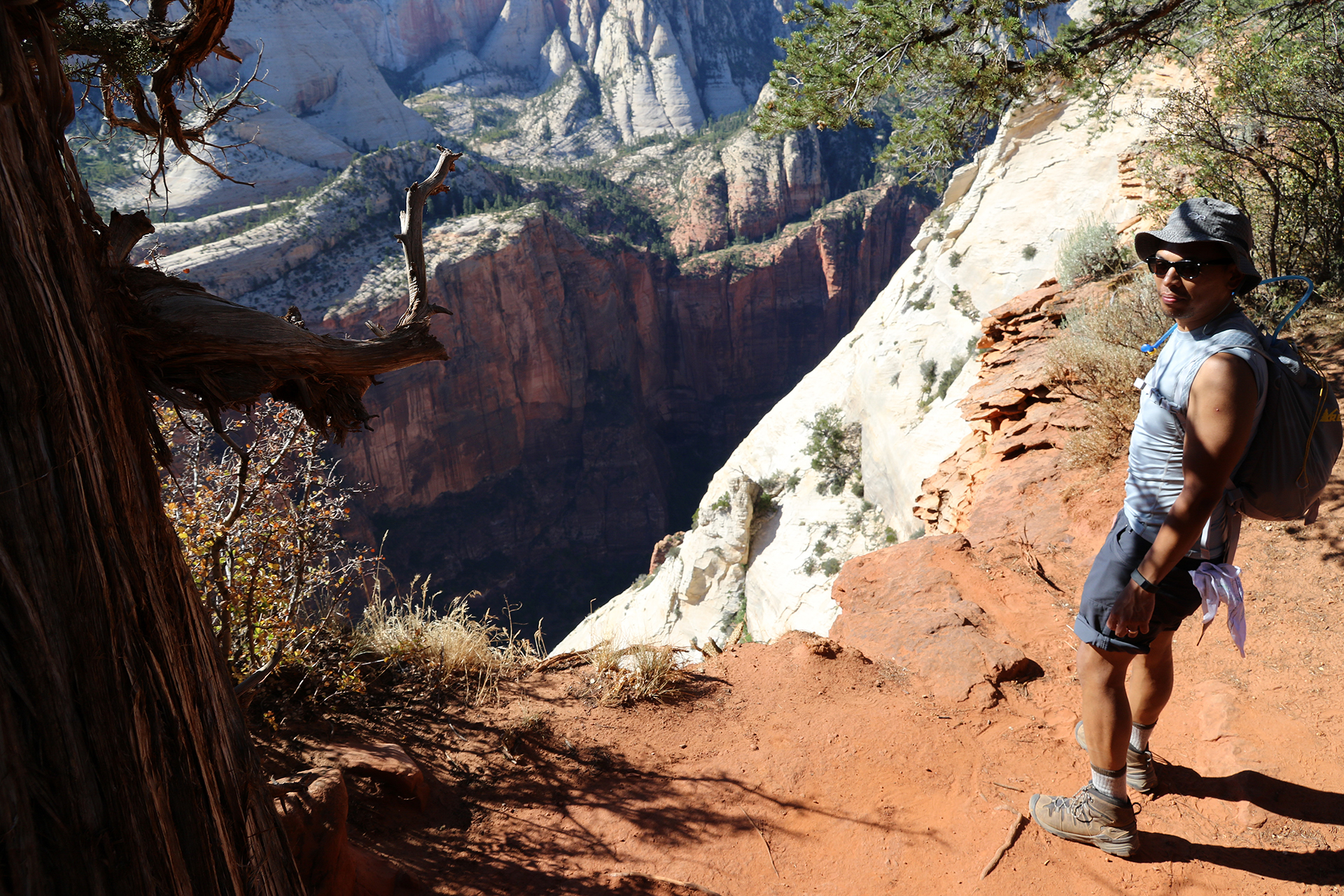 We stopped briefly at an unofficial viewpoint, a sheer drop off at the bottom of a sandy decline. Sean peered down into the Temple of Sinawava. 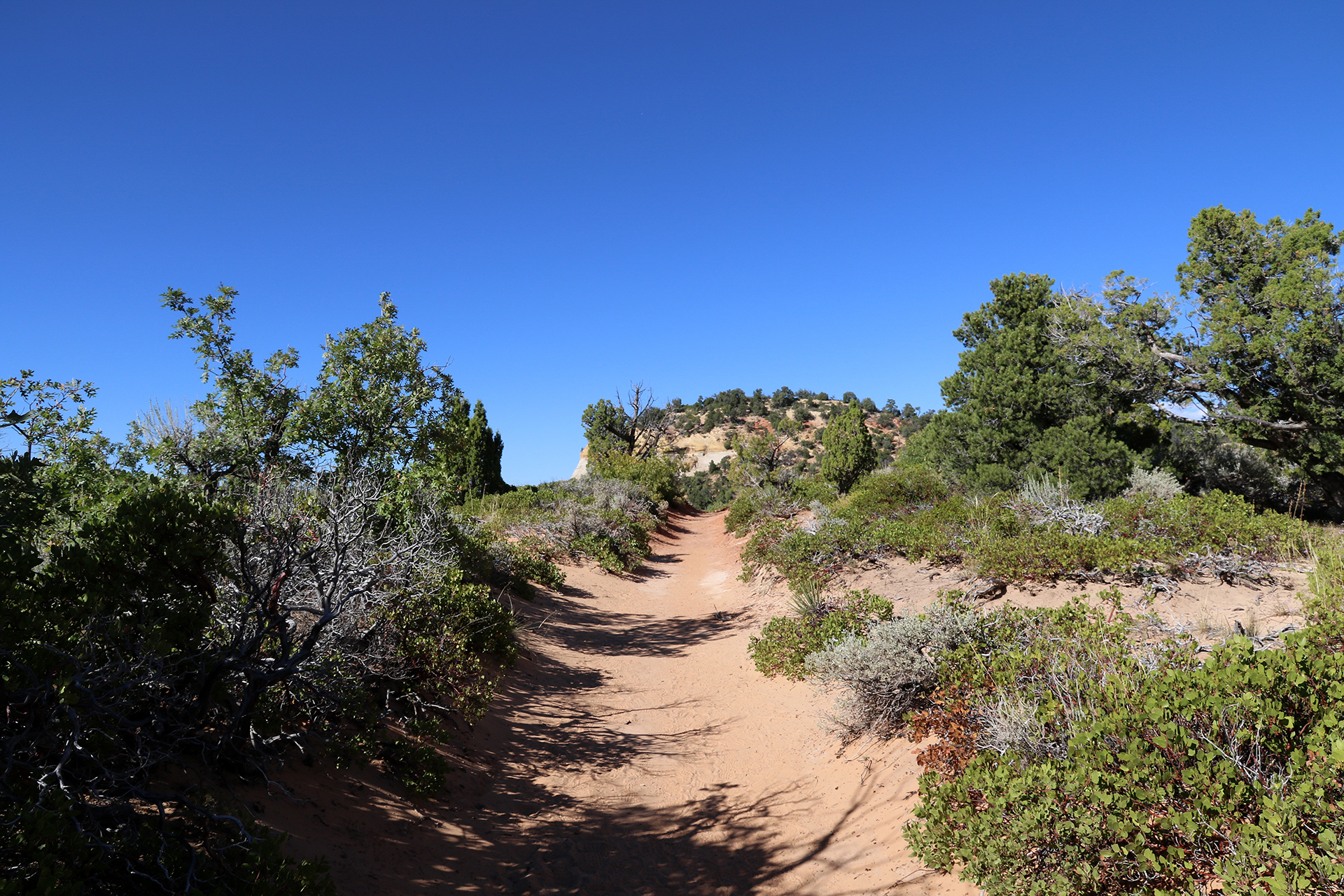 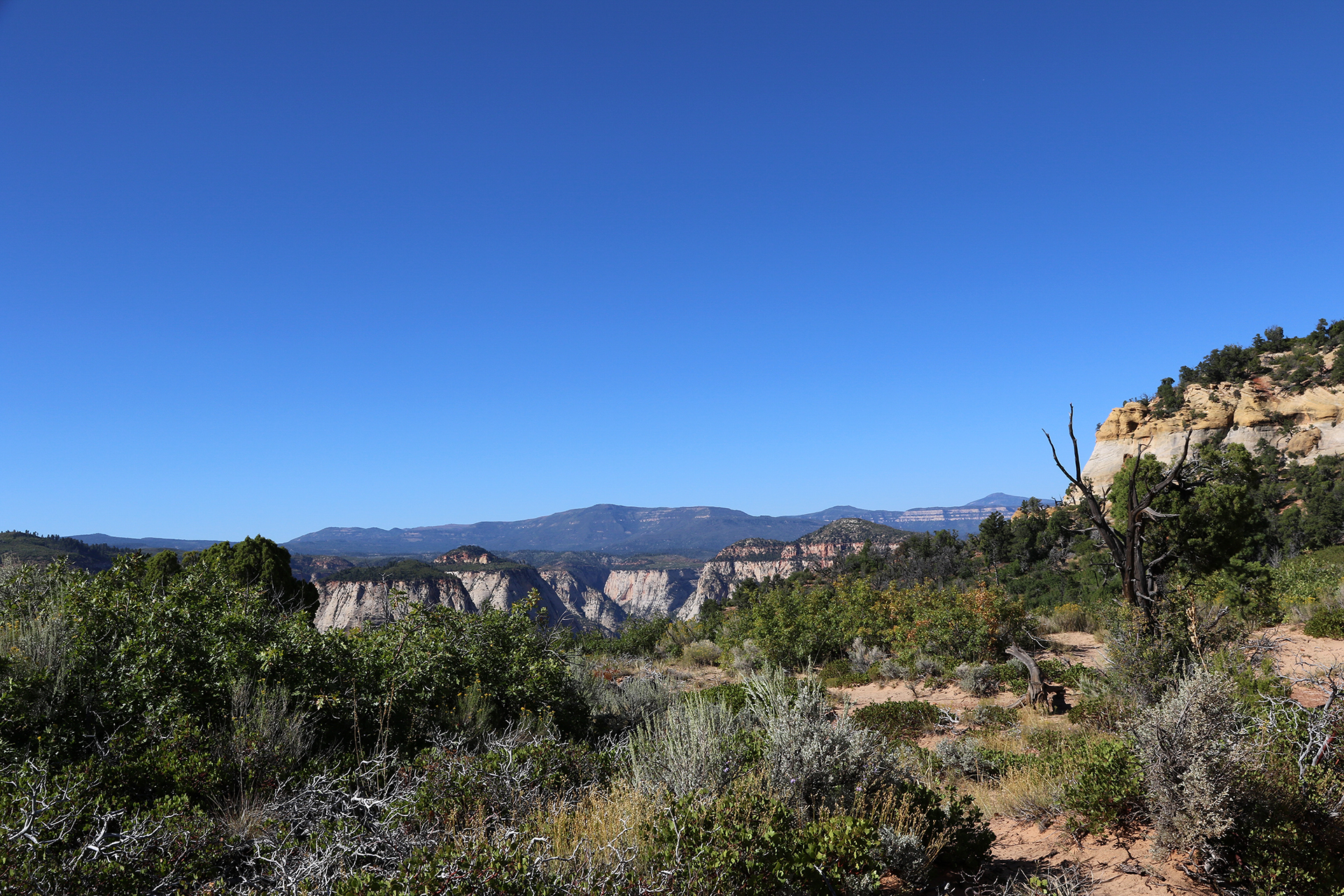 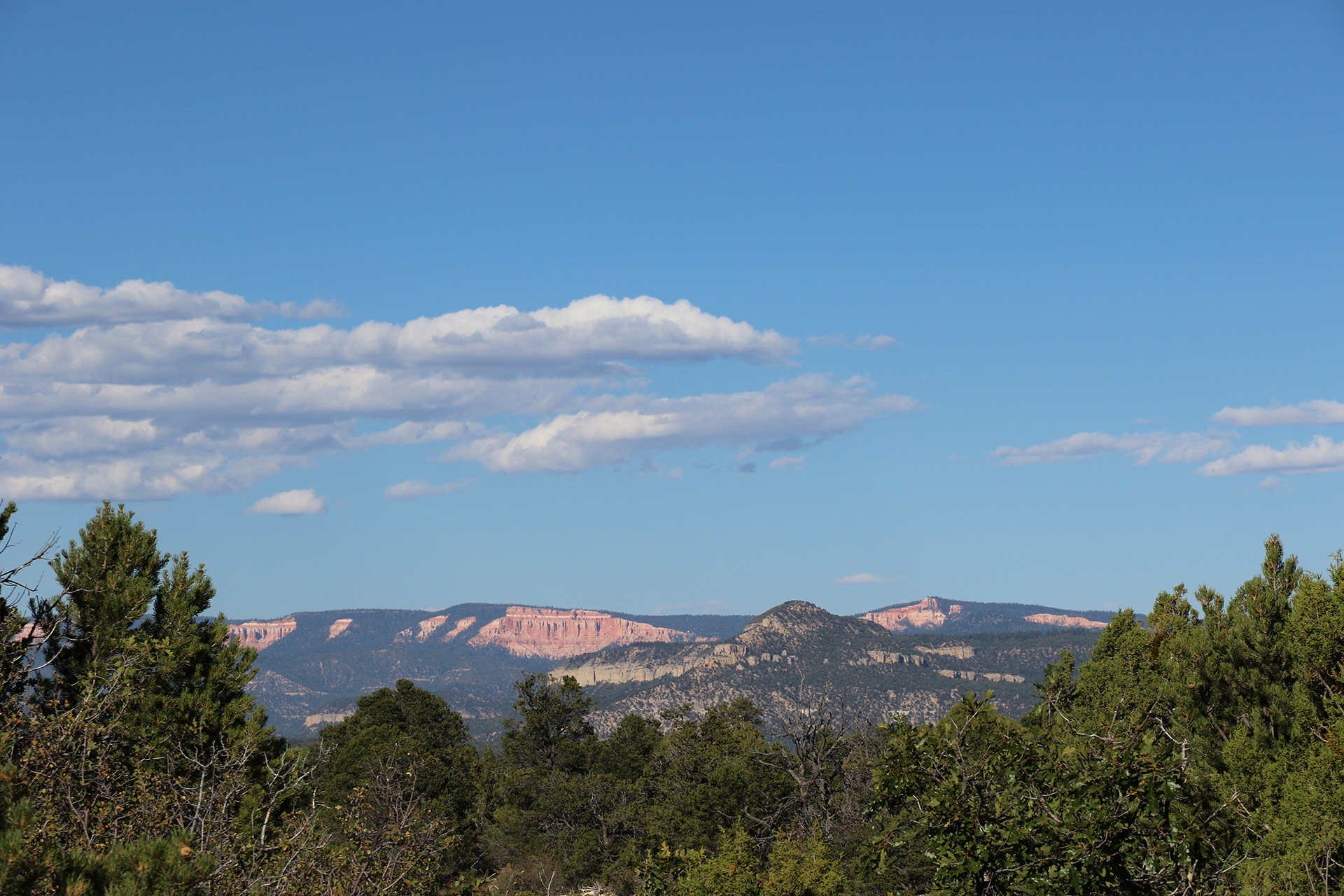 On the return hike, the daypack and poles were gone, so all was well, presumably.

Near that spot, the breeze died down, and we stopped hiking. It was absolutely silent. There was a complete absence of sound: no birds, no wind, no footfalls, no airplanes, no traffic. It was as if all the sound had been sucked out of the world by a giant mute button.

After a couple of minutes, the breeze picked up again, and we resumed our hike. 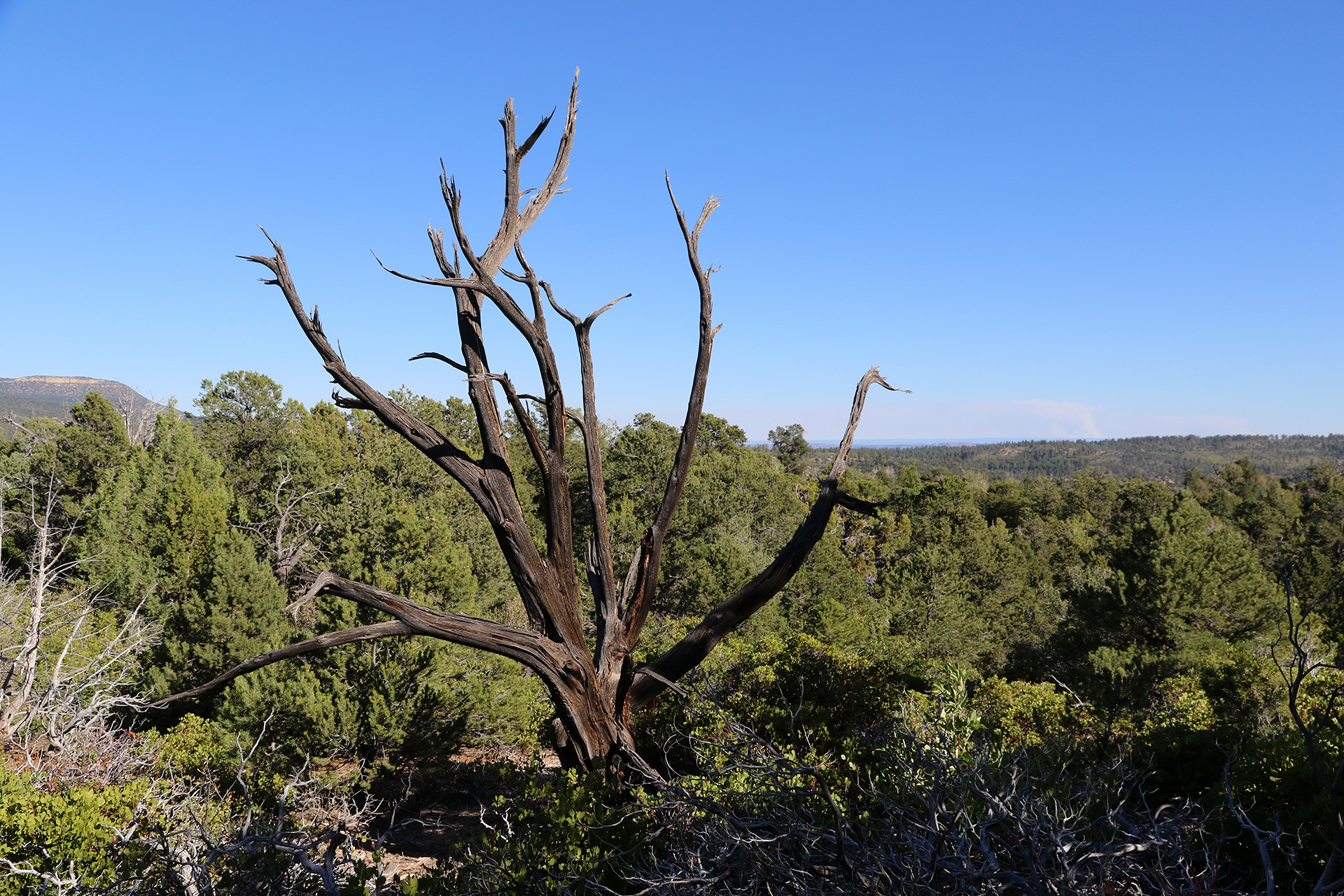 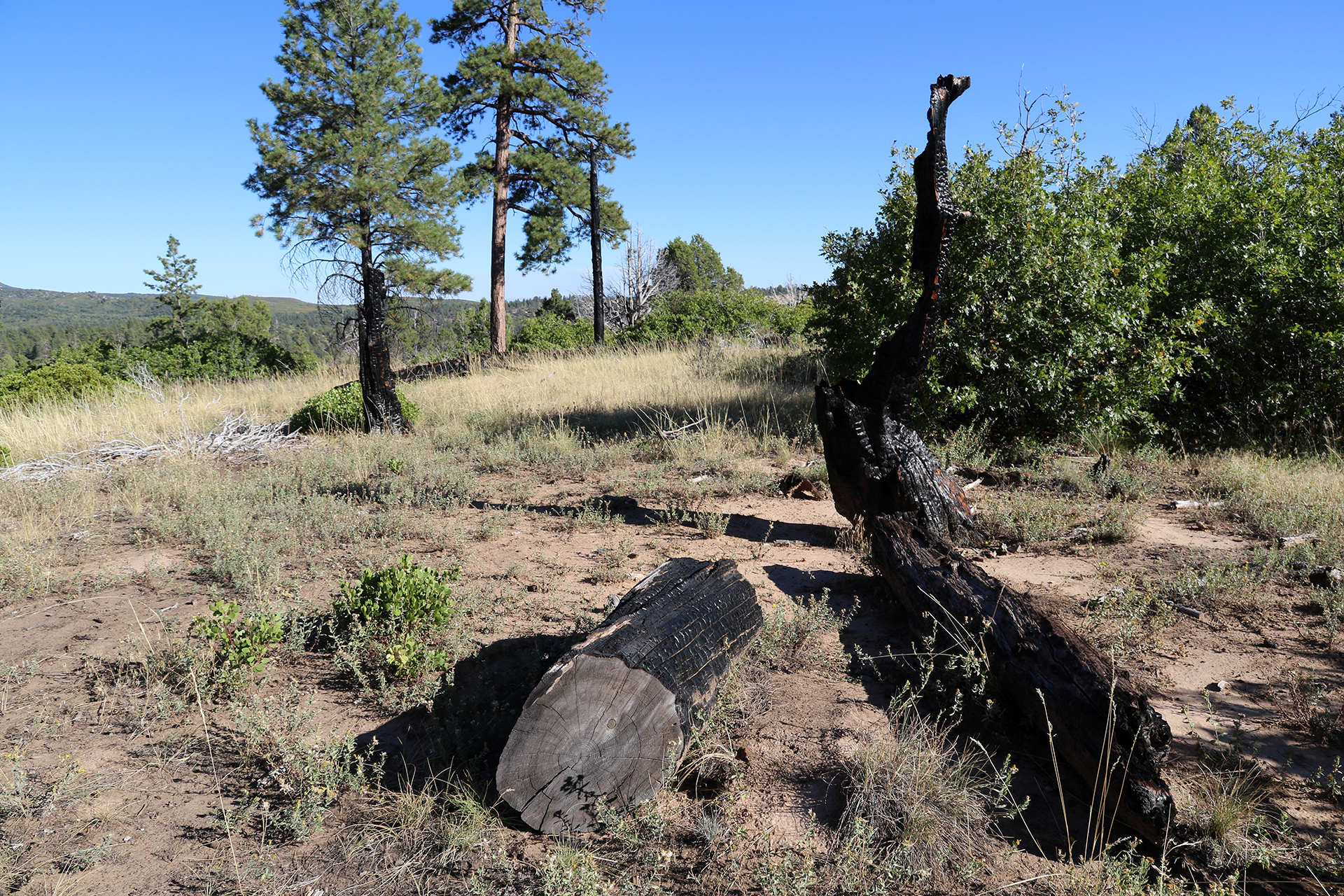 Near the very end of the hike, we passed a little party of six just setting out. Besides five or six people at Observation Point, we’d encountered only eight other hikers in three hours and fifteen minutes of hiking at Zion National Park. As busy as Zion is, it is very possible to get away from people in the Park. Alternatives to Zion Canyon, like Kolob Canyons or the high country trails, offer peace and solitude even if the Canyon itself doesn’t.