Wednesday, August 26 was rainy in the eastern part of Denali National Park. We woke in our tent at Savage River Campground to a steady rain. But unlike our overnight at Savage River on Saturday, the interior of our tent was mostly dry. We’d chosen a better-drained site for the tent than I had that earlier night. This time there was just a little puddle of moisture down near our feet, which wasn’t horrible given the insistence of the rain. 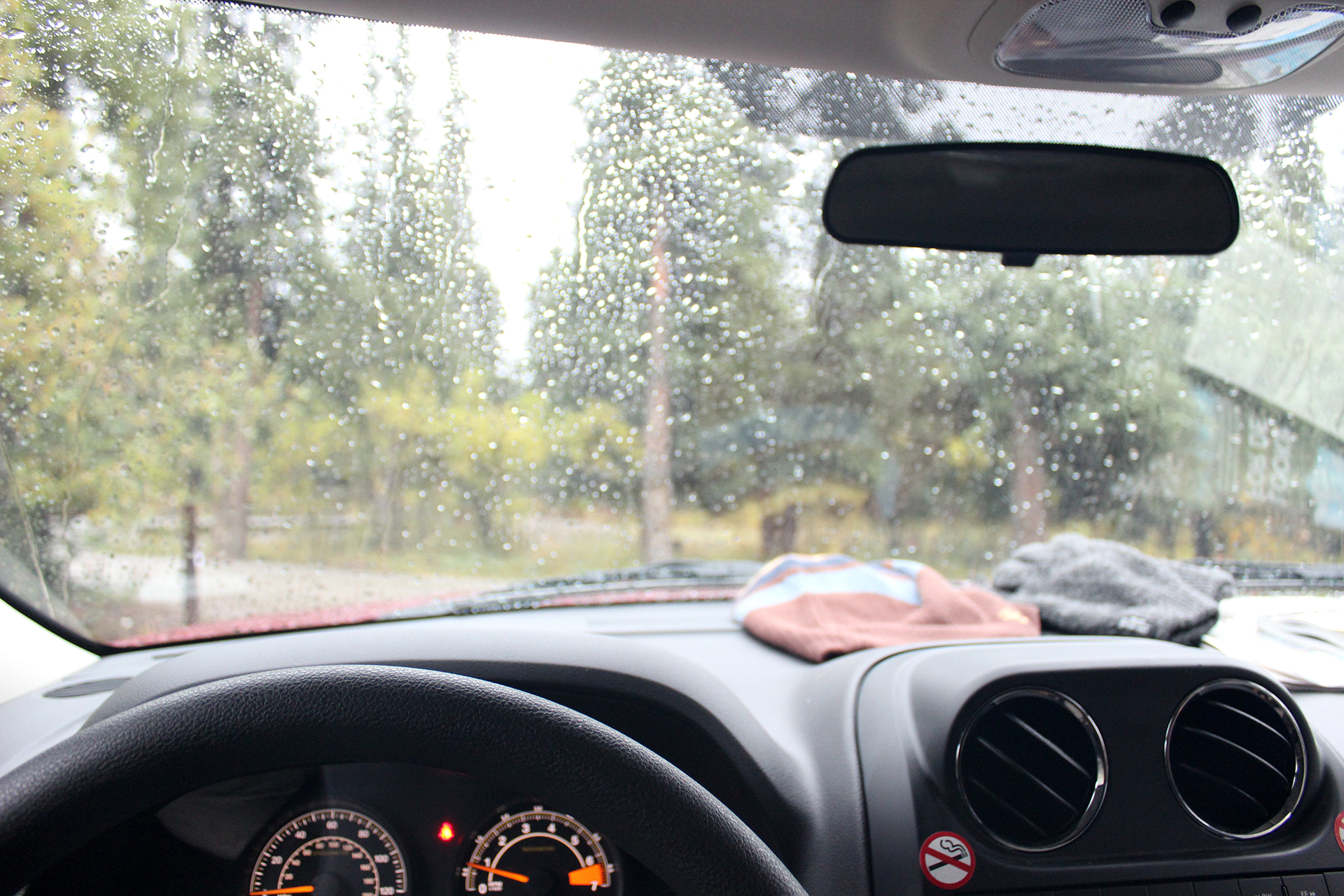 We decided to have breakfast at the Park Grill. So we performed our morning ablutions over strong percolator coffee, assembled our day hiking gear, and headed in the Jeep the ten or so miles to the Visitor Center campus.

Mist rising from the boreal forest met clouds rolling over the outer range of the Alaska Range north of the road. So many of Denali National Park’s moods had been on display for us since we’d arrived Saturday evening.

We stopped at a pullout as we approached the entrance area so that Sean could capture a few images of the magnificent Alaska Railroad trestle spanning Riley Creek just south of McKinley Station. 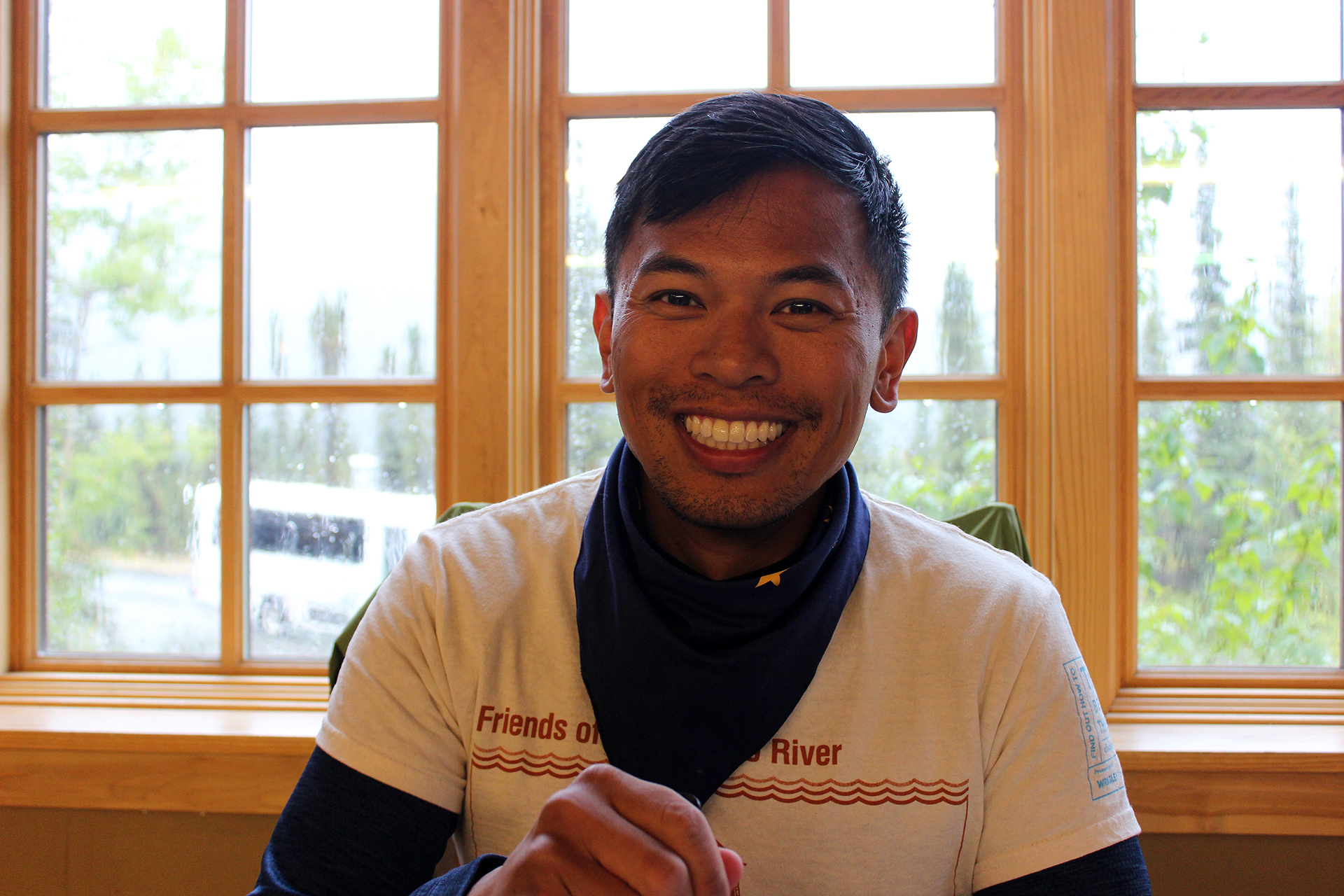 We had a hearty breakfast at the Park Grill. Our plan was to take the one and a half-mile roundtrip hike to Horseshoe Lake after we ate. Then we’d catch the 2pm dogsledding demonstration at the kennels at Park Headquarters. And then maybe we’d do another hike later in the afternoon, maybe one near Savage River.

Moose graffiti in the men’s room at the Park Grill 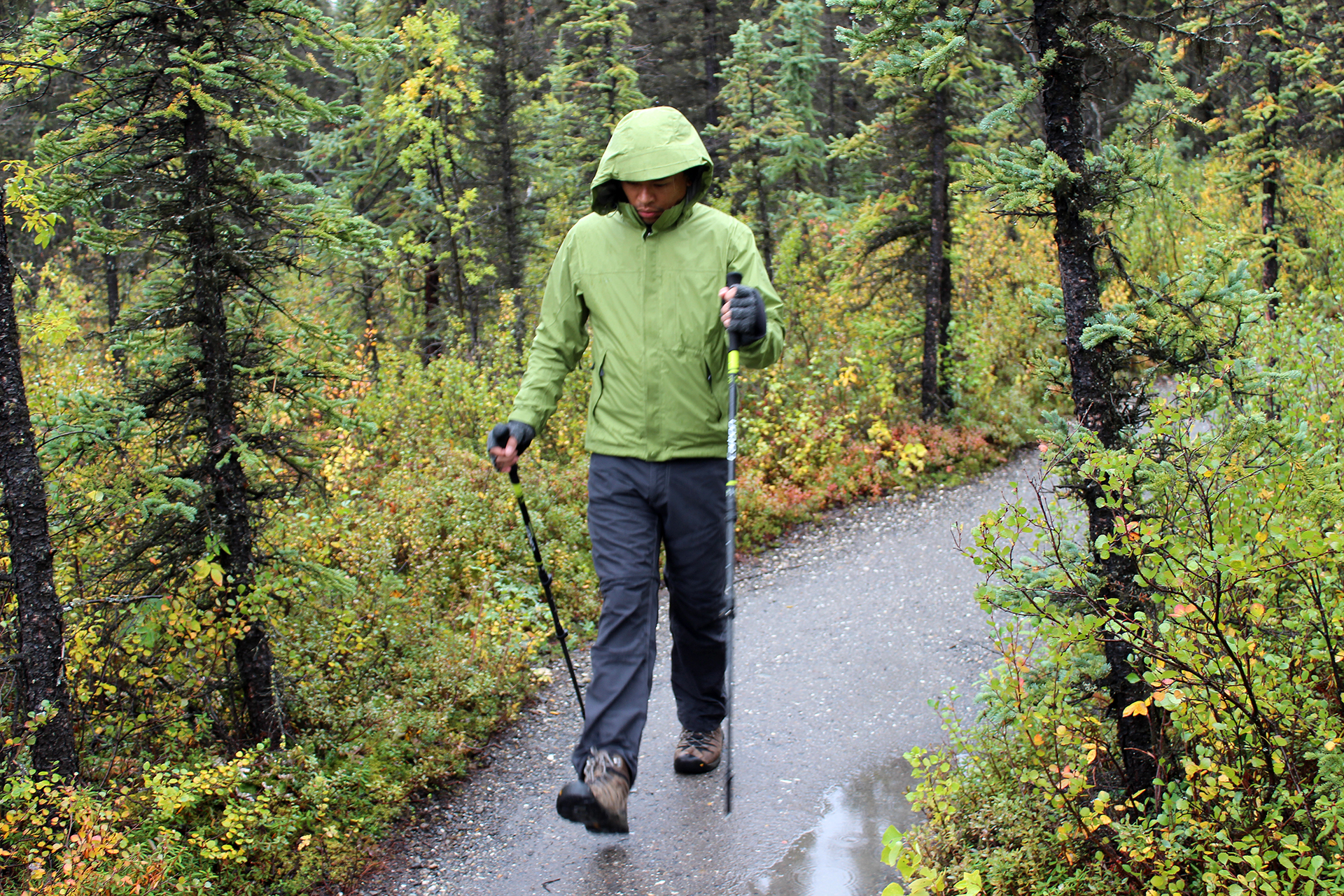 At around 11:15am, we set off from the Visitor Center campus on the Taiga Trail, barely a mile one way, which would take us to the turn off for Horseshoe Lake Trail. 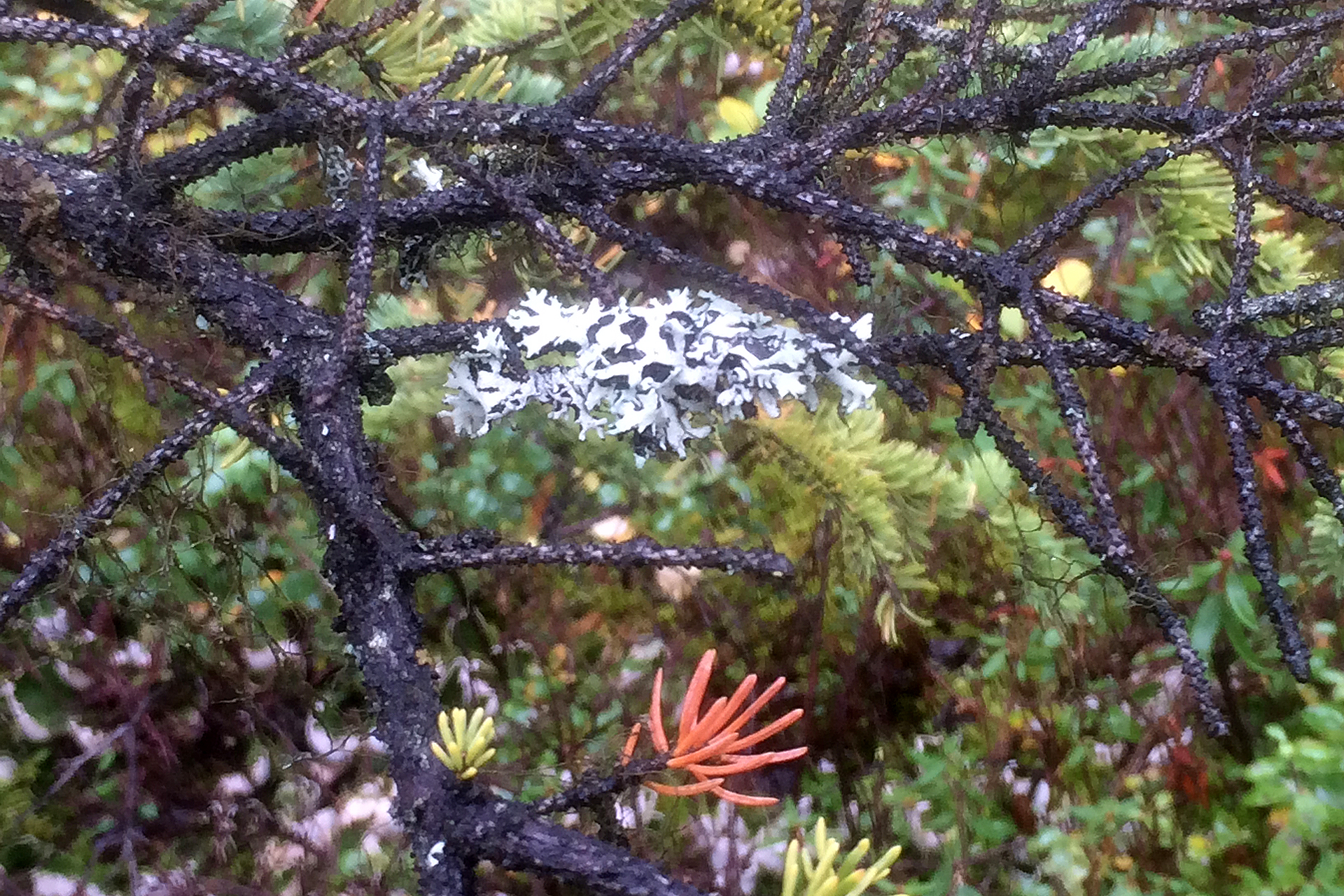 After spending the past several days in the tundra or in the tundra/taiga transition zone, it was delightful to be exploring the boreal forest of White and Black Spruce, Aspen, and a variety of shrubs, mosses, and lichens. 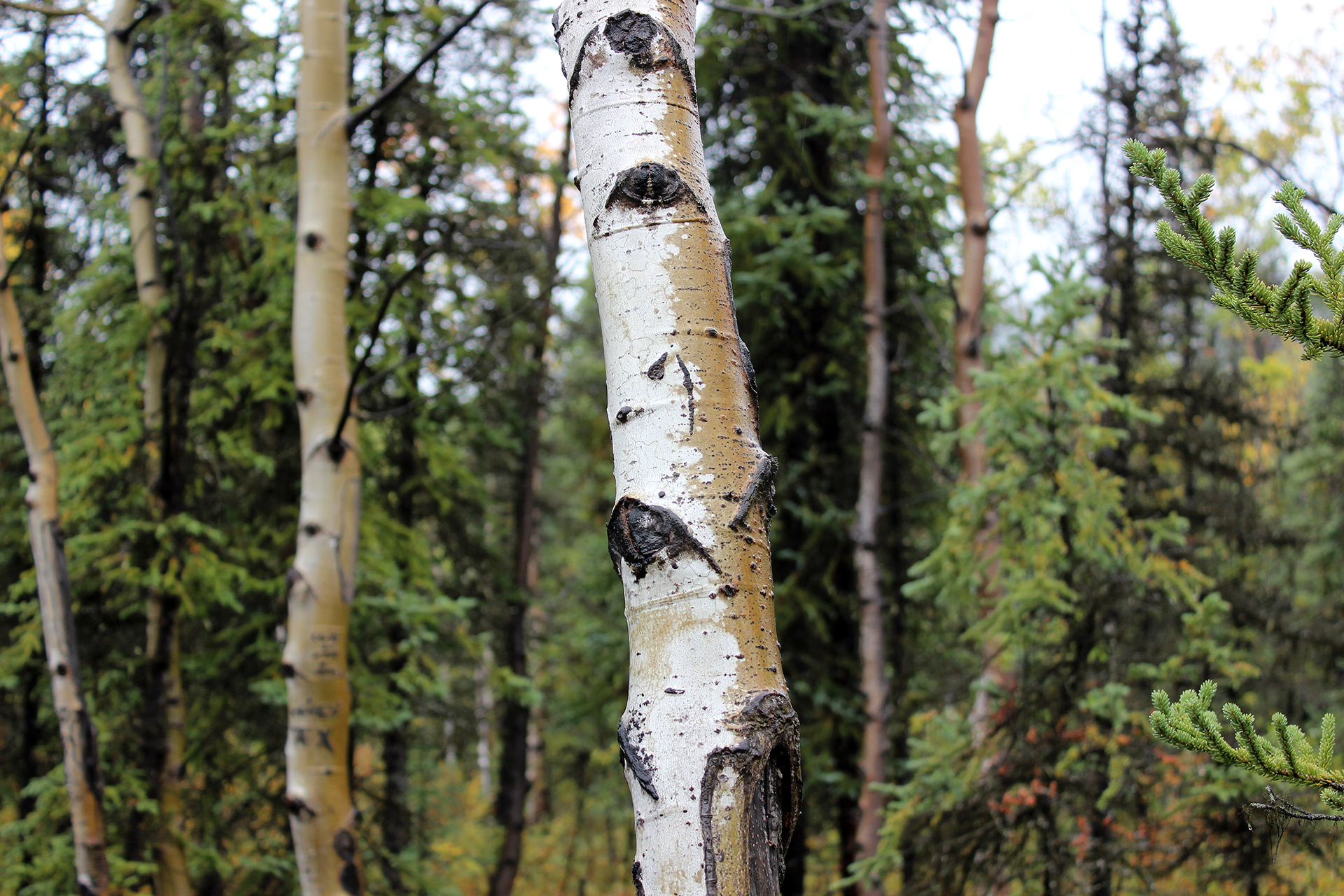 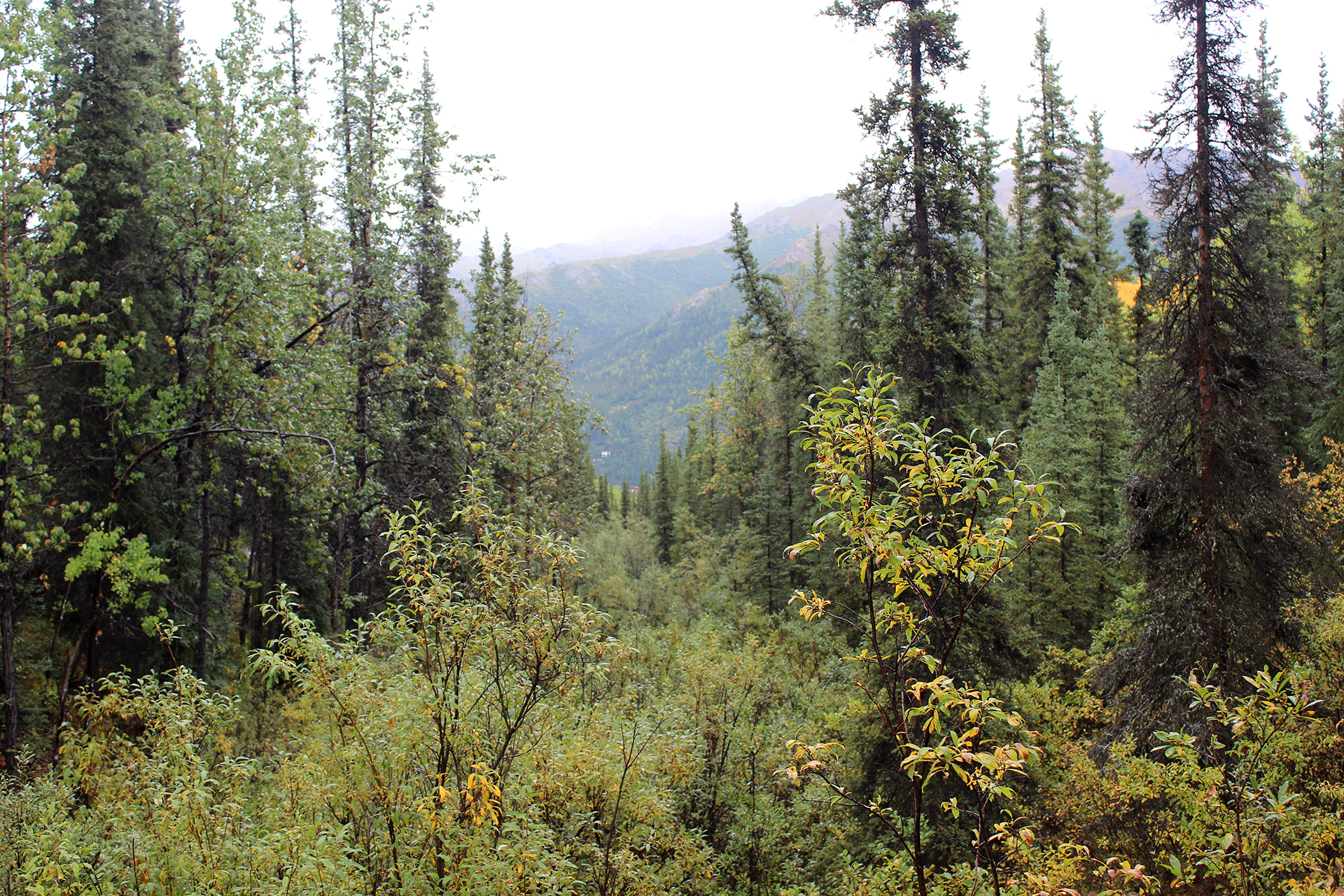 The taiga is so lush in the eastern part of the park that even though we were less than a mile from the visitor center, we were in deep forest. The only evidence of civilization were the well-maintained trail, including a robust footbridge. At a few points, there were signs about ongoing trail maintenance. 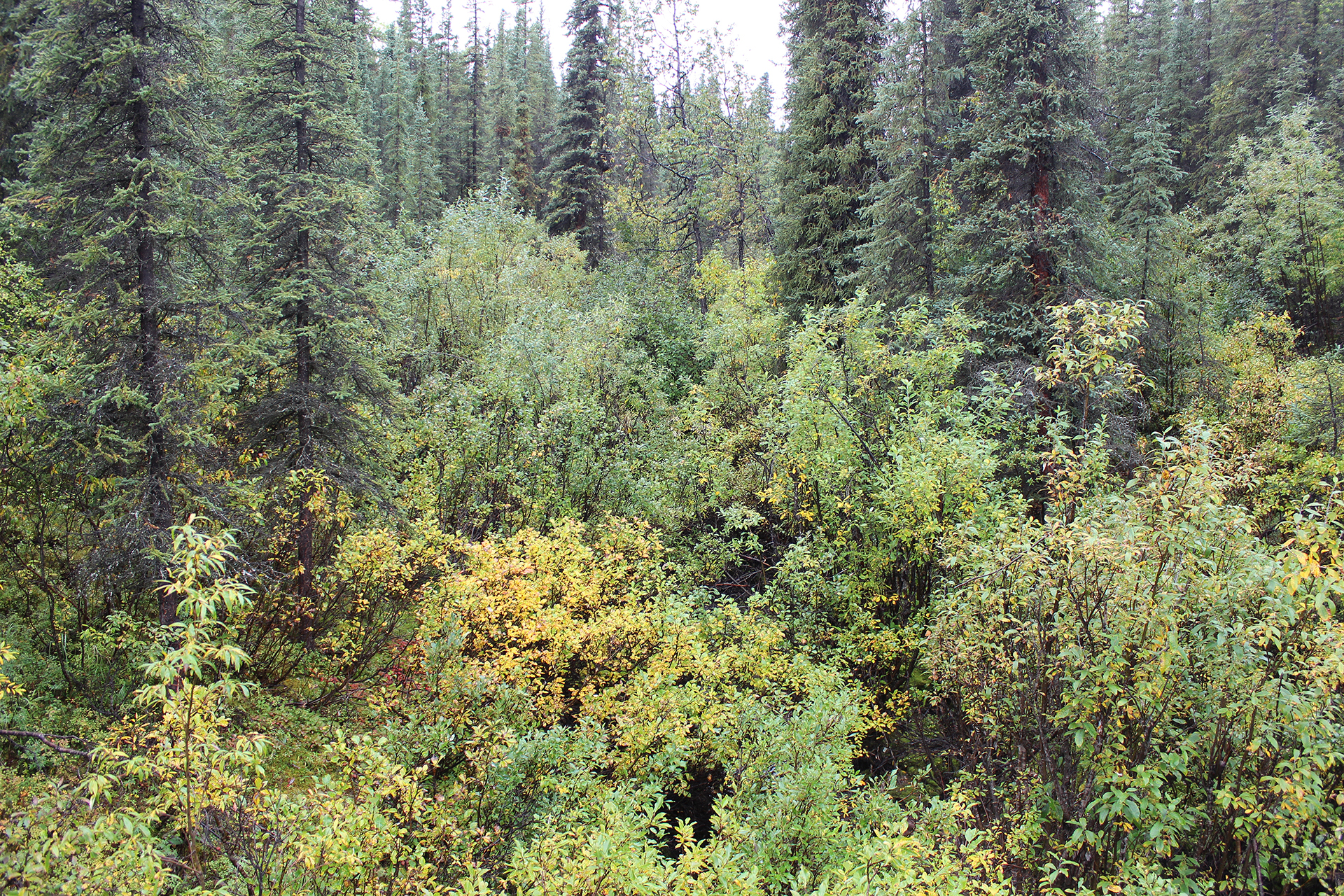 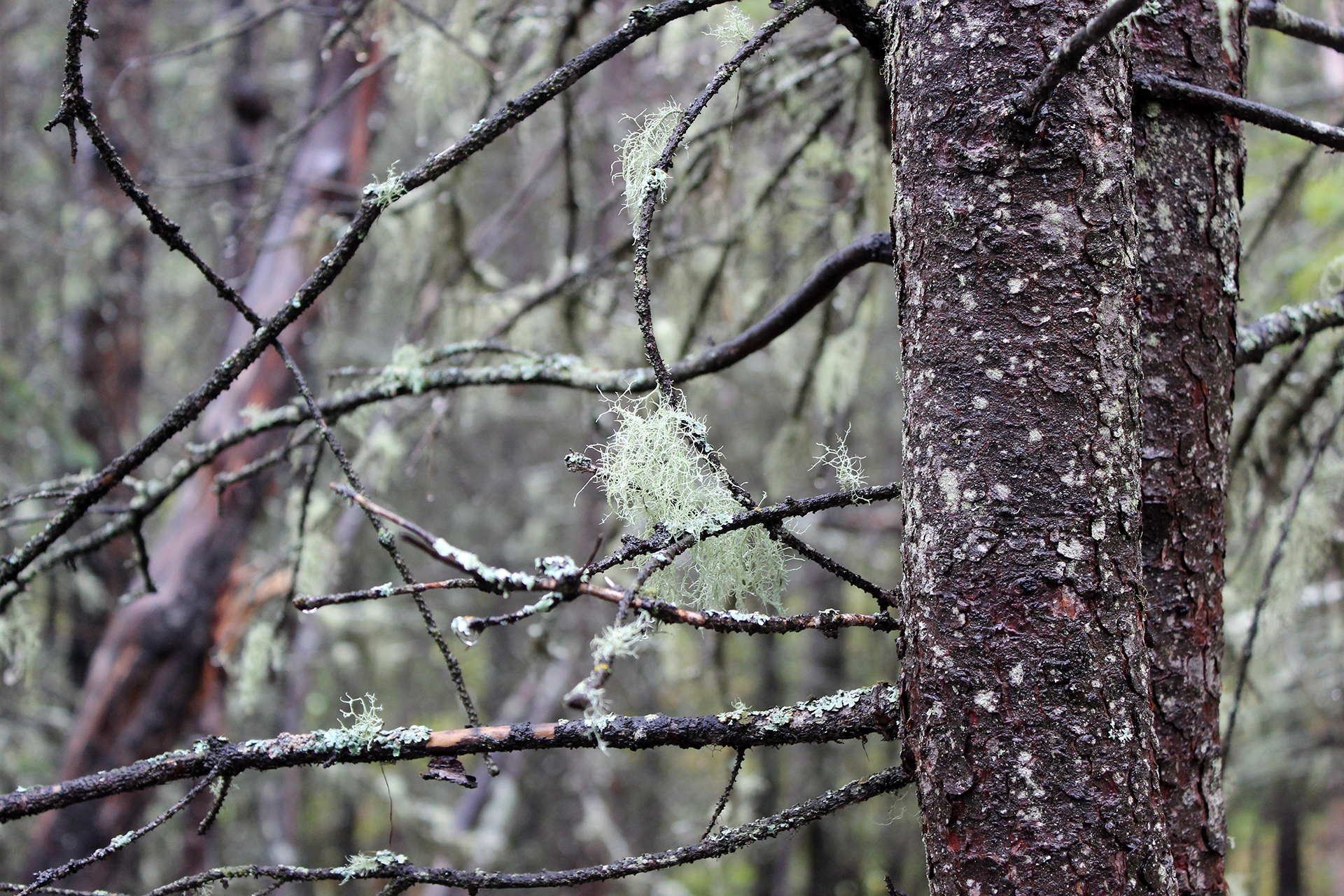 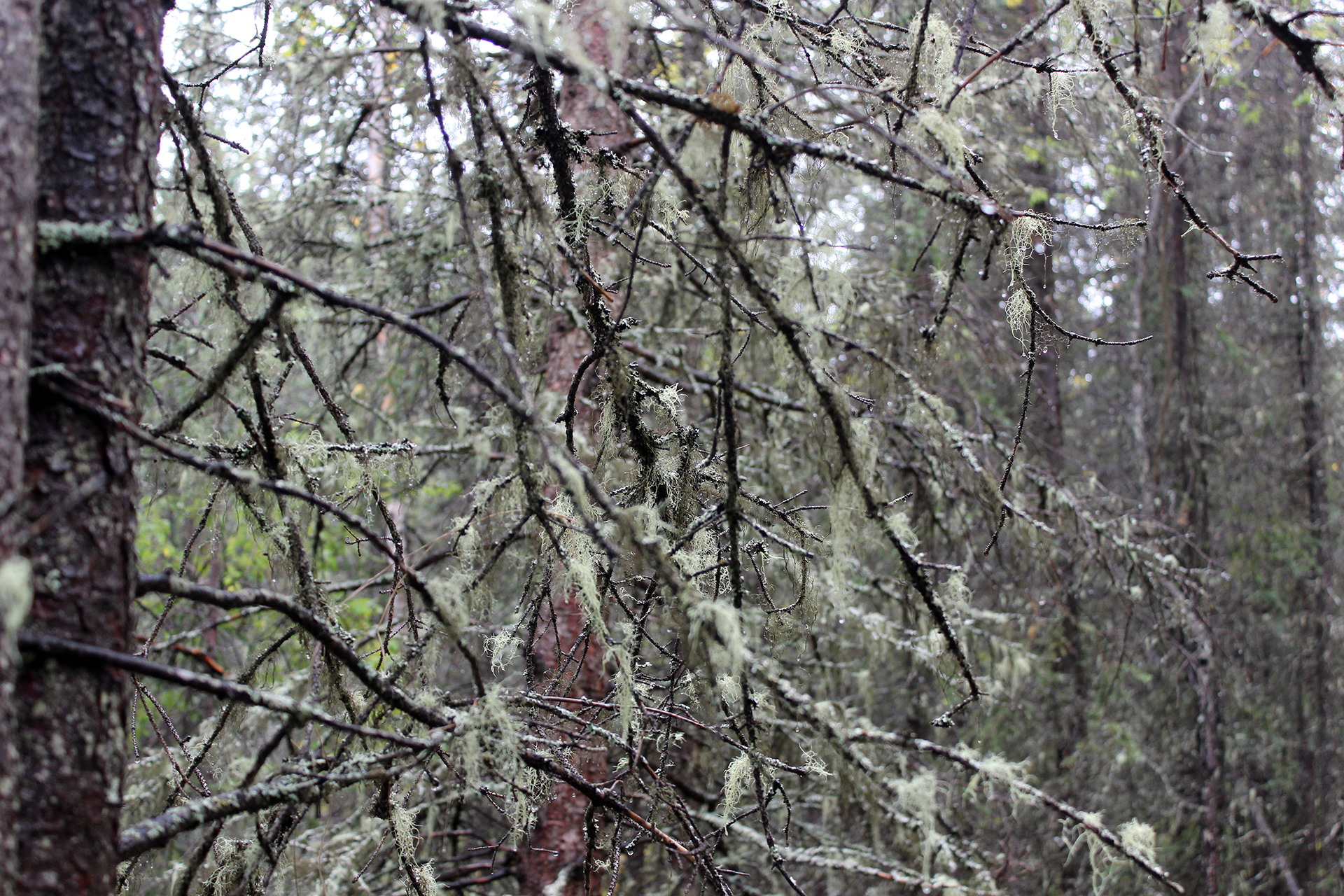 Autumn had arrived in the taiga. On the bus ride from Wonder Lake the day before, multiple passengers had noted that there was more fall color than there had been even that morning. Bus driver Anna had remarked that in late August, autumn came so rapidly that sometimes it was noticeable between morning and evening of the same day.

As we continued our hike, the trail began to rise, sometimes quite steeply. The trail was rated as moderate, so it wasn’t completely surprising, but still it was steeper than I’d expected.

The forest began to thin around the trail. We were no longer under canopy. And throughout it all, it rained. My camera was safely encased in a clear plastic sleeve made to prevent it from getting wet. The sleeve had been working well during our time at Denali. Otherwise, we were drenched from the rain and sweaty from exertion within our rain jackets. 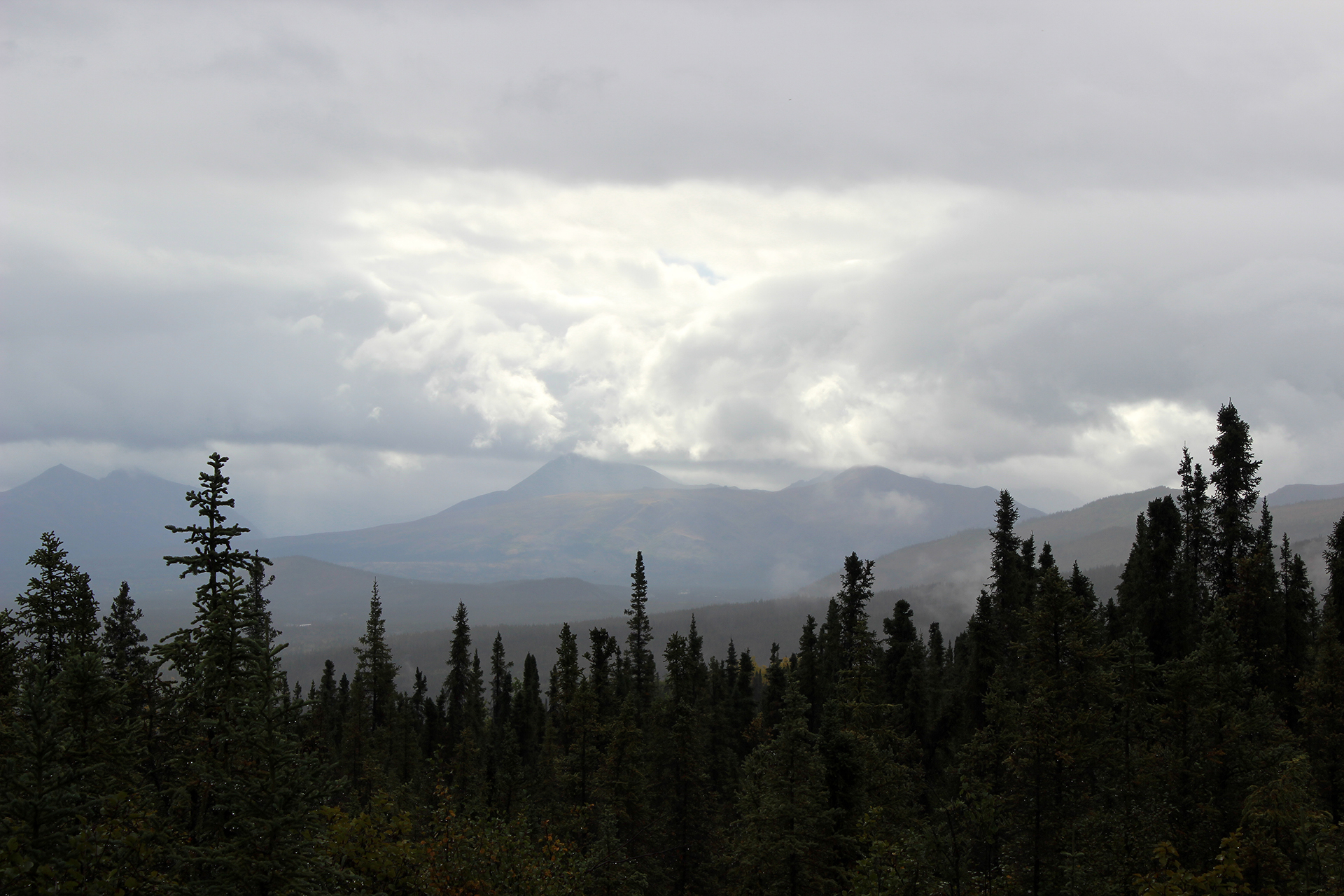 In retrospect, we should have realized we were on the wrong trail long before we began to emerge in earnest above the forest. Clearly, we had somehow gotten ourselves onto the Mount Healy Overlook Trail, a strenuous four-and-a-half-mile out and back. Ugh. We had been hiking for half an hour. Not too long, but it felt too late to go back to Horseshoe Lake Trail if we wanted to make the sled dog demonstration (the shuttle bus from the Visitor Center to the kennels departed at 1:20pm), so we decided to keep going. Hopefully we weren’t too far from the summit of Mount Healy. 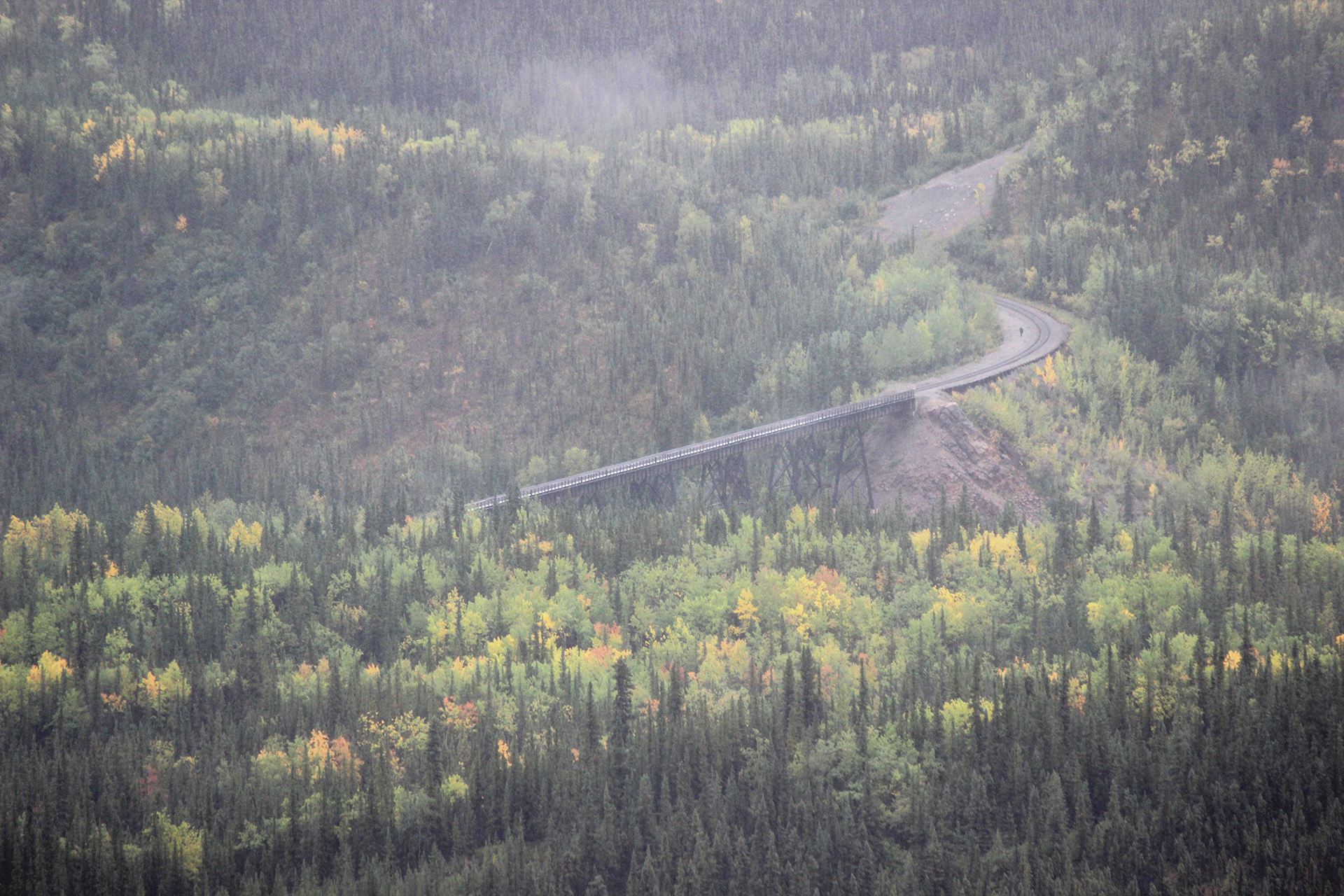 Far below us we heard the southbound Alaska Railroad train blow its whistle in McKinley Station. We paused, waiting for it to proceed across the Riley Creek Trestle. After about six or seven minutes, it seemed clear that it wasn’t about to move. The rain was falling more insistently now, so we continued on.

The trail rose in a series of steep switchbacks. In order not to startle bears, we kept up a conversation. Sean did the heavy conversational lifting, elucidating an exegesis on the complete discography of Beyoncé from Destiny’s Child through the eponymous album.

As we trudged up the trail, I noticed that my camera’s reactions were a touch sluggish. 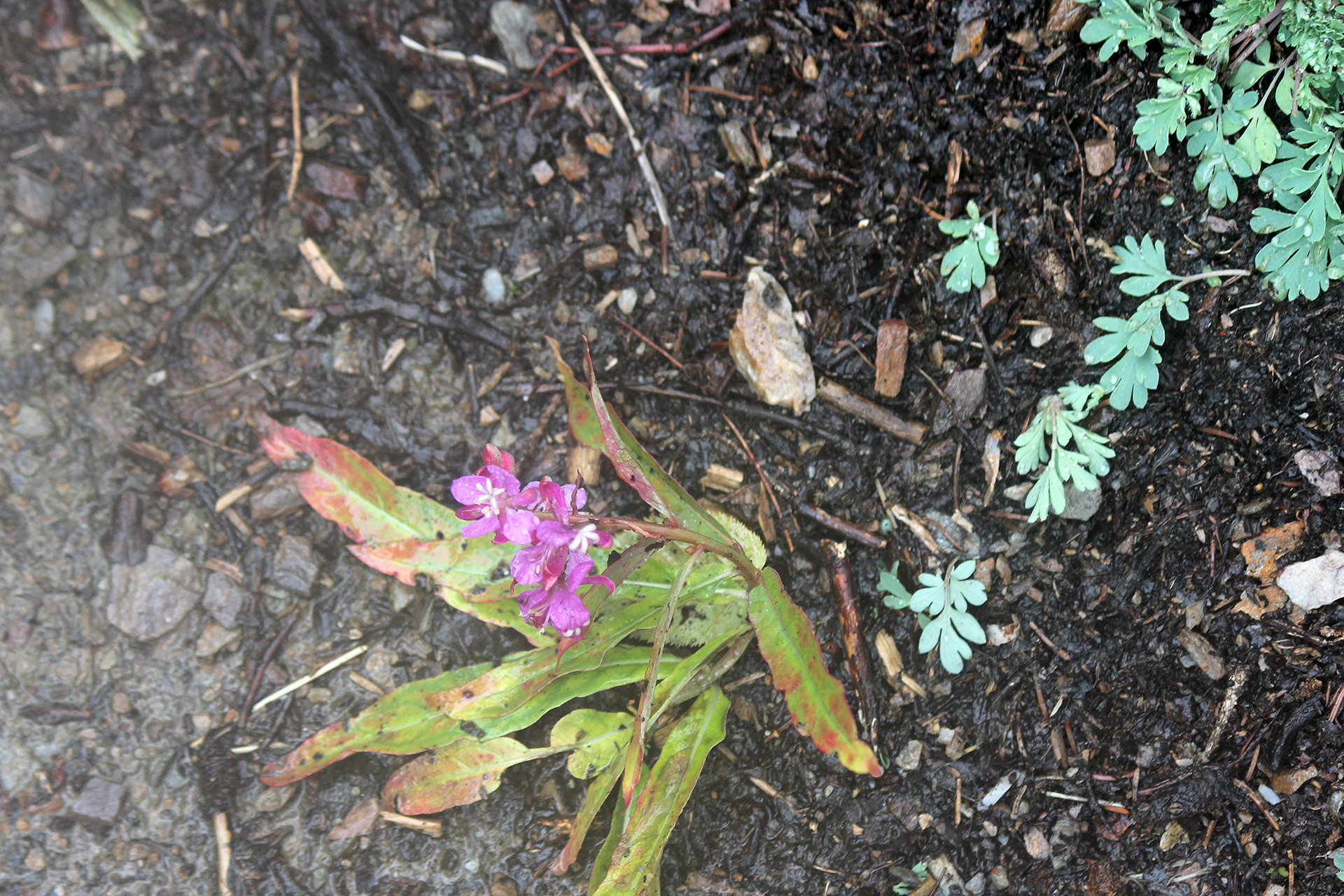 After snapping a quick photo of a tiny Fireweed along the trail, the camera struggled for a long while to record the image. I turned it off and on, and everything seemed ok.

At the next switchback, I paused to capture an image and discovered that my camera was completely dead. It just made a sickening click when I turned it off and on, then nothing. I turned it off again, waited, and tried turning it on.

I examined it a bit more and noticed that it was getting pretty wet inside the plastic sleeve. I felt a bit of panic rise in my throat. I’d often said that this camera, a Canon Rebel T3i, which Sean had given me for my birthday in 2012, was my favorite object I’d ever owned.

My cool-headed husband noted that visibility was so bad at this height (we’d essentially walked up into the rain clouds), that there was little reason to continue to the overlook since there’d be nothing to see.

I wiped the camera off as best as I could and stowed it in my pack. Then we started swiftly back down the trail. We had been hiking for only about an hour at that point. We made it down much more quickly.

Back in the forest and after the footbridge, we noted the trail turn off that we’d missed. It was marked with a temporary sign in the midst of other temporary signs about trail work. So I didn’t feel quite as badly that we’d missed it, but still, we should have been more observant. Mount Healy would be added to our list of unforced hiking errors. Not a big list, truly, but one that reminds us to practice humility in the National Parks.

Back at the car, accessing the Visitor Center wifi, Sean looked up what to do with a wet camera while I removed the lens and the memory card, which was wet as I took it out of its slot. The first thing Sean read was not to try to turn the camera on because that could short the circuit board. Of course that’s exactly what I had tried to do up on the trail. he read advice to open everything and let it dry out. Sometimes it would turn back on and be fine. I did that and set it on the dash so that some warm air could blow into it.

We’d just have to wait and see.