Wind Cave National Park is possibly the most important little-known park in the entire system. It became the seventh National Park in 1903 when Congress passed legislation, subsequently signed by President Theodore Roosevelt, to protect a small, but beautiful cave in the Black Hills of southwestern South Dakota. (Starting here with Wind Cave, all five park units we’d visit would have some connection or indebtedness to Roosevelt.) It was the first National Park to protect a cave, and it also happened to protect an important transition zone between the mixed grass prairie of the South Dakota plains and the Ponderosa Pine forests of the Black Hills.

The quiet importance of the park would grow. What had been assumed to be a small cave is now known to be the fourth longest and among the oldest in the world. On the surface, a reintroduction program for the American Bison, begun in 1913, has yielded one of the most important, purest herds in the United States. It is a herd vital to reintroduction programs across the prairie.

Yet even many of those who have visited the Badlands or Mount Rushmore haven’t necessarily heard of this unassuming, intensely beautiful park. Perhaps that’s for the best.

Before heading from Badlands National Park to the Black Hills, however, we needed to stop for lunch. And, really, there was only one choice: 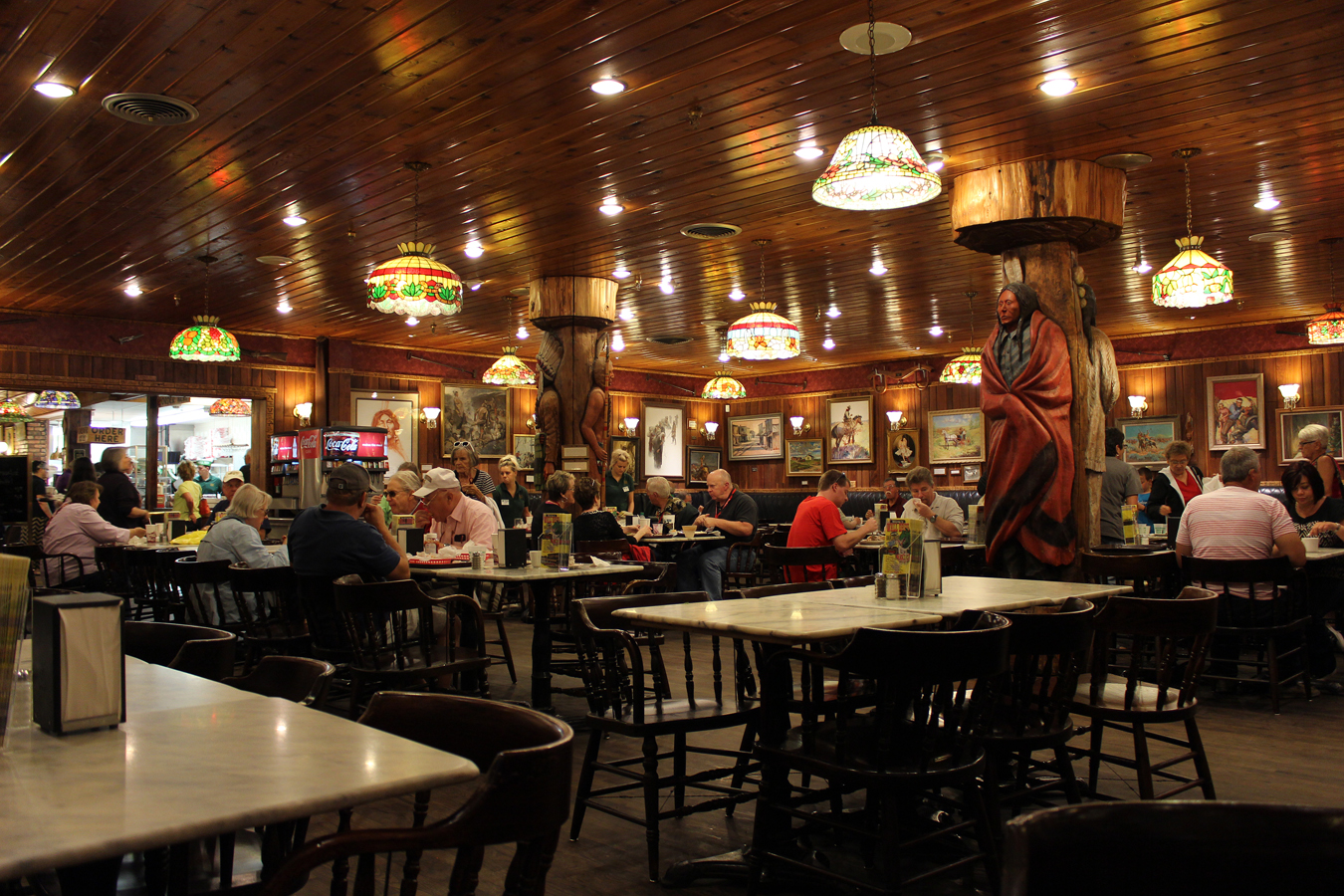 After we’d had our bison burgers, pie, five-cent coffee, donut, and free water…after we’d played in the arcade shooting range…and after we’d seen the Tyrannosaurus do its thing, we were back on the road, heading west on I-90 toward Rapid City and the Black Hills (which are visible and getting closer in the image below).

Rapid City is tucked into the northeast foothills of the hills, but we headed south from there, with rolling plains to our left and the first Ponderosa Pine covered foothills (the Boland Ridge) to our right. We entered the hills near their southeast edge, directly through the Boland Ridge and into the resort town of Hot Springs. We noted the location of a gas station and grocery store, but continued through the park and then north for another twelve miles on SD-385 to the park entrance.

We drove past the visitor center and on to Elk Mountain Campground, tucked in the edge of the Ponderosa Pine forest on the park’s western edge. We paid our fee and looked for a good site. We were overjoyed to find one in the tents-only loop that was secluded and set back and up from the road, surrounded by pines.

The site was immaculate. The comfort stations were clearly cleaned regularly and maintained well. The campground itself was well thought out, shielding tents from RVs and both from the group area. It was, unequivocally, the best campground I’ve yet experienced on public lands. We could have stayed a week or two.

After we set up camp, we headed back to Hot Springs to get some groceries, stopping on the way at the CCC-era visitor center to stamp our passports and pick up some information.

This campsite was our chance on the trip to have a fire ring with a grill grate over it. So instead of dehydrated backpacking food, we’d be feasting around a campfire on italian sausage and mac and cheese. With a bottle of wine for good measure.

On the way back into the park, we paused at several of the interpretive overlooks.

The photo below demonstrates well why this easternmost range of the Rocky Mountains was named the Black Hills by the Native Americans who lived in the area. The higher, cooler hills boast a thick, dark coat of Ponderosa Pine forest, which stands in sharp contrast to the golden Prairie they rise above. 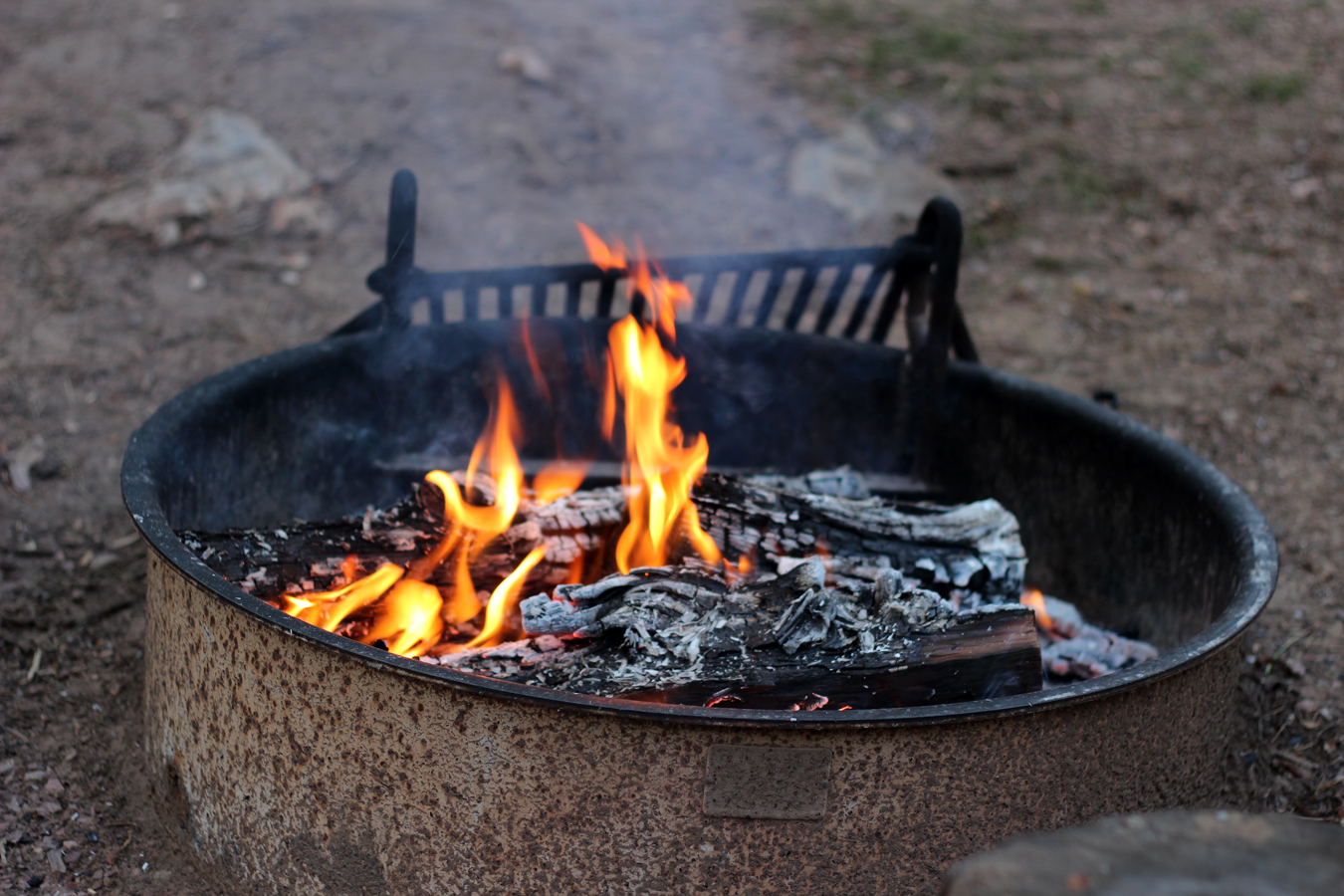 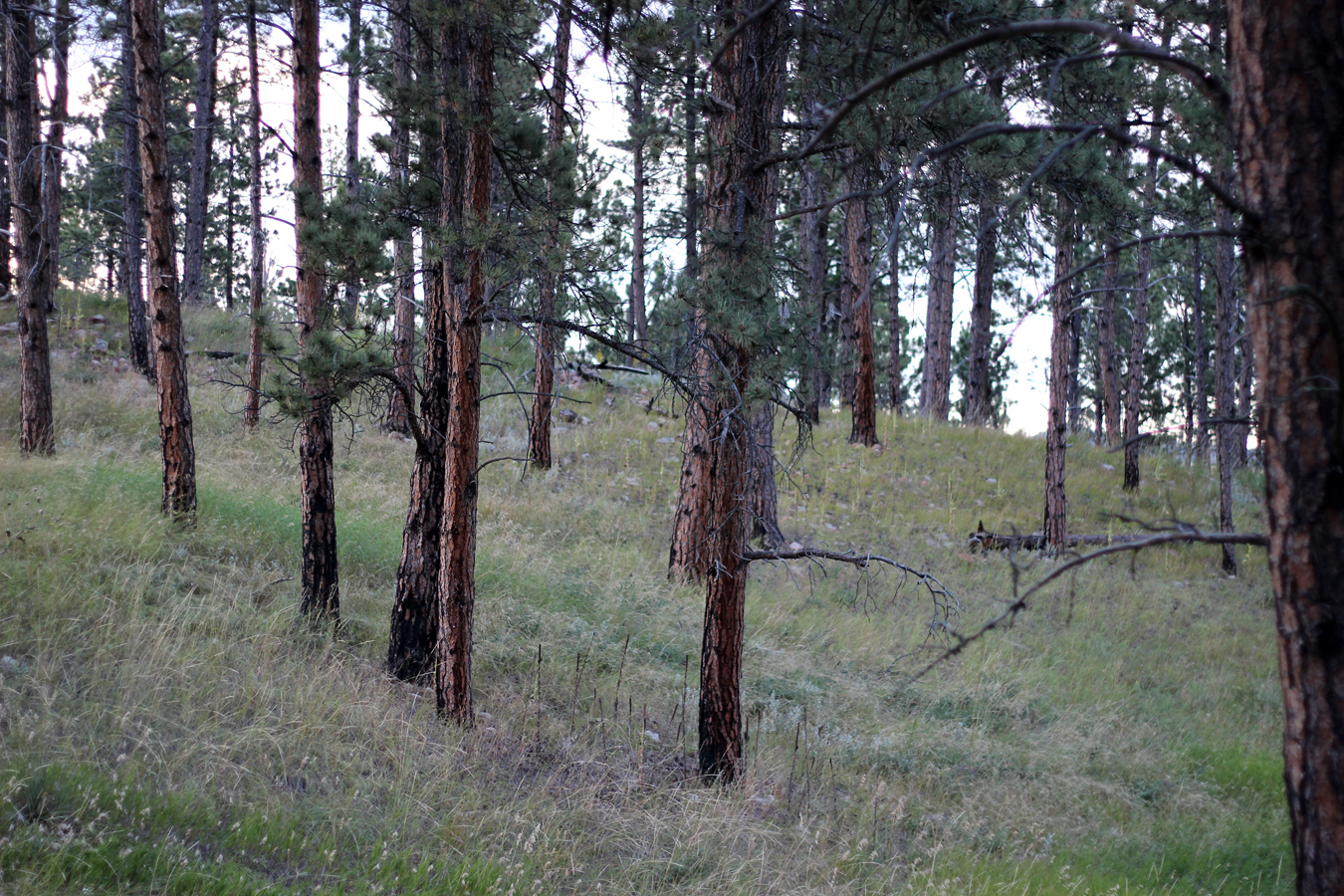 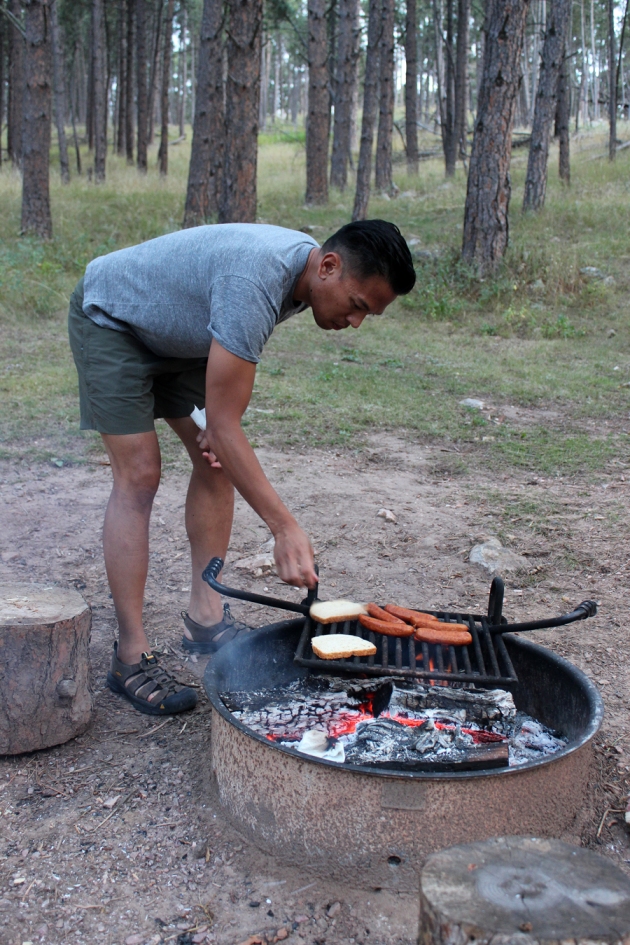 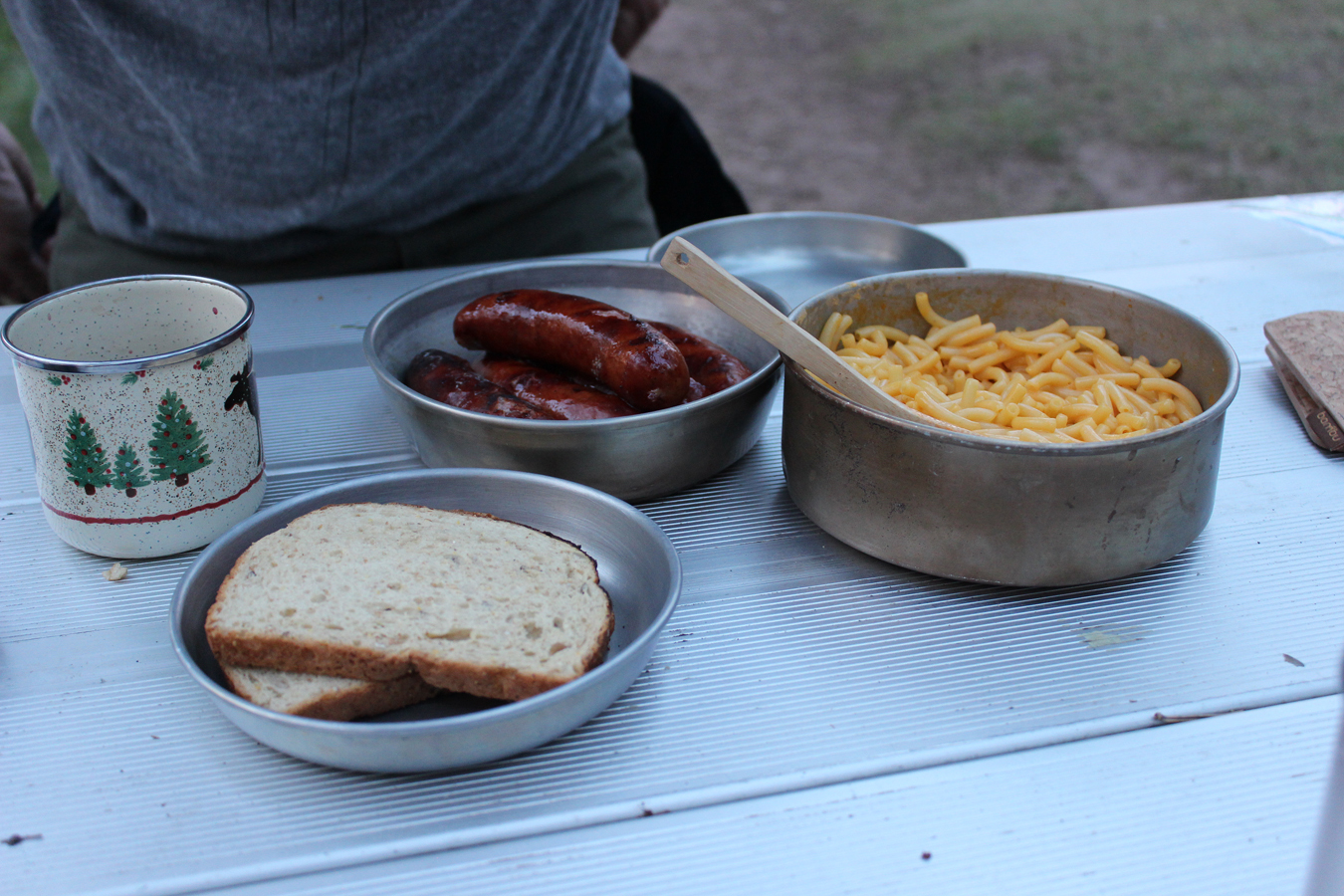 Sean assembles a Lego set, an impulse buy from the Target in Sioux Falls. 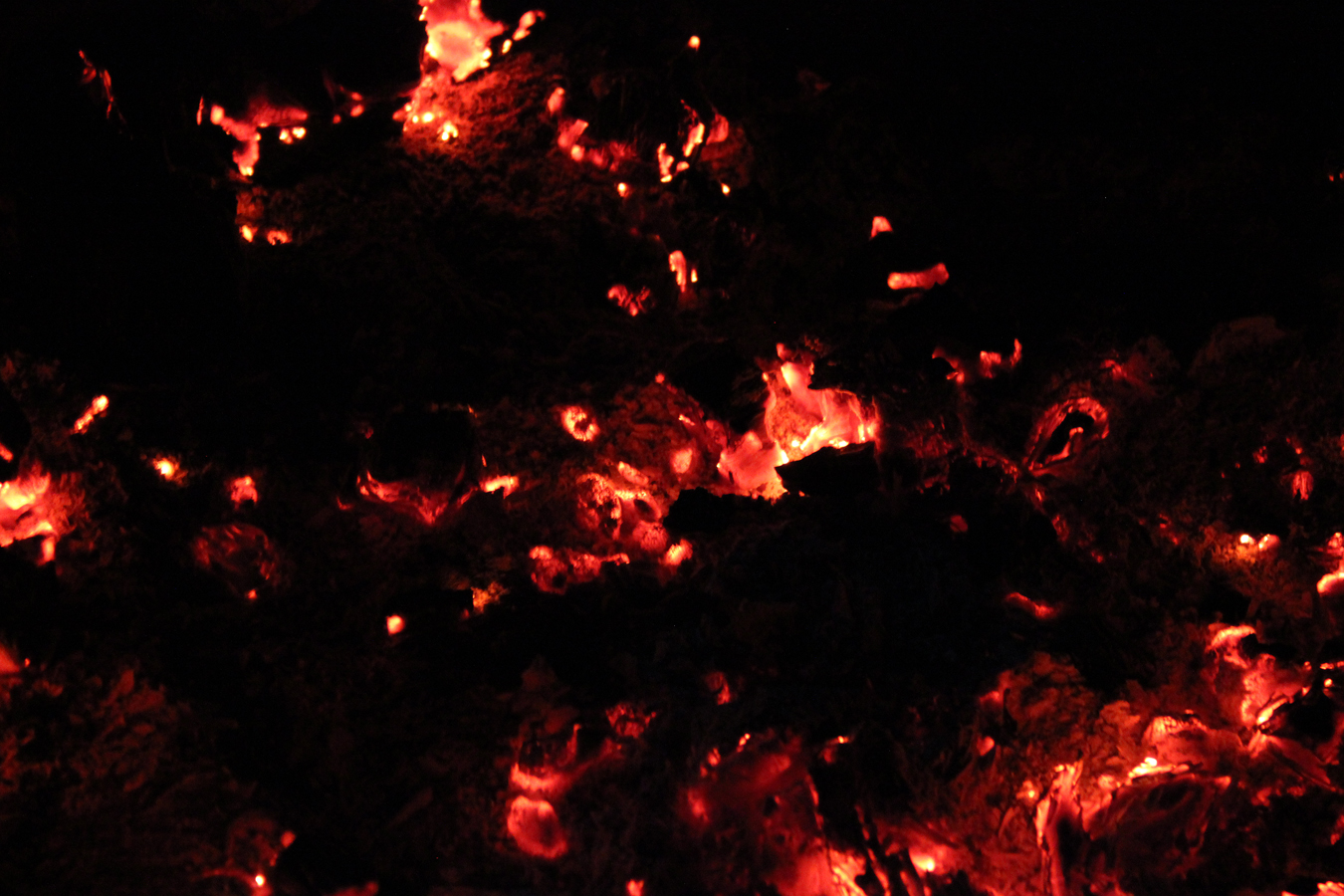 In the dark of the tent, we heard an unusual bird call. I’m pretty good at visual IDs, but abysmal at identifying birdsong:

I very much enjoy that all you can hear are crickets, the bird, and the wind in the pines. Sean remarked that the wind sounded like a distant highway, but that was impossible. Our urban brains kept thinking that’s what it was though.

I awoke just before sunrise and slipped out of the tent, just in time to capture some magical light as the sun rose. 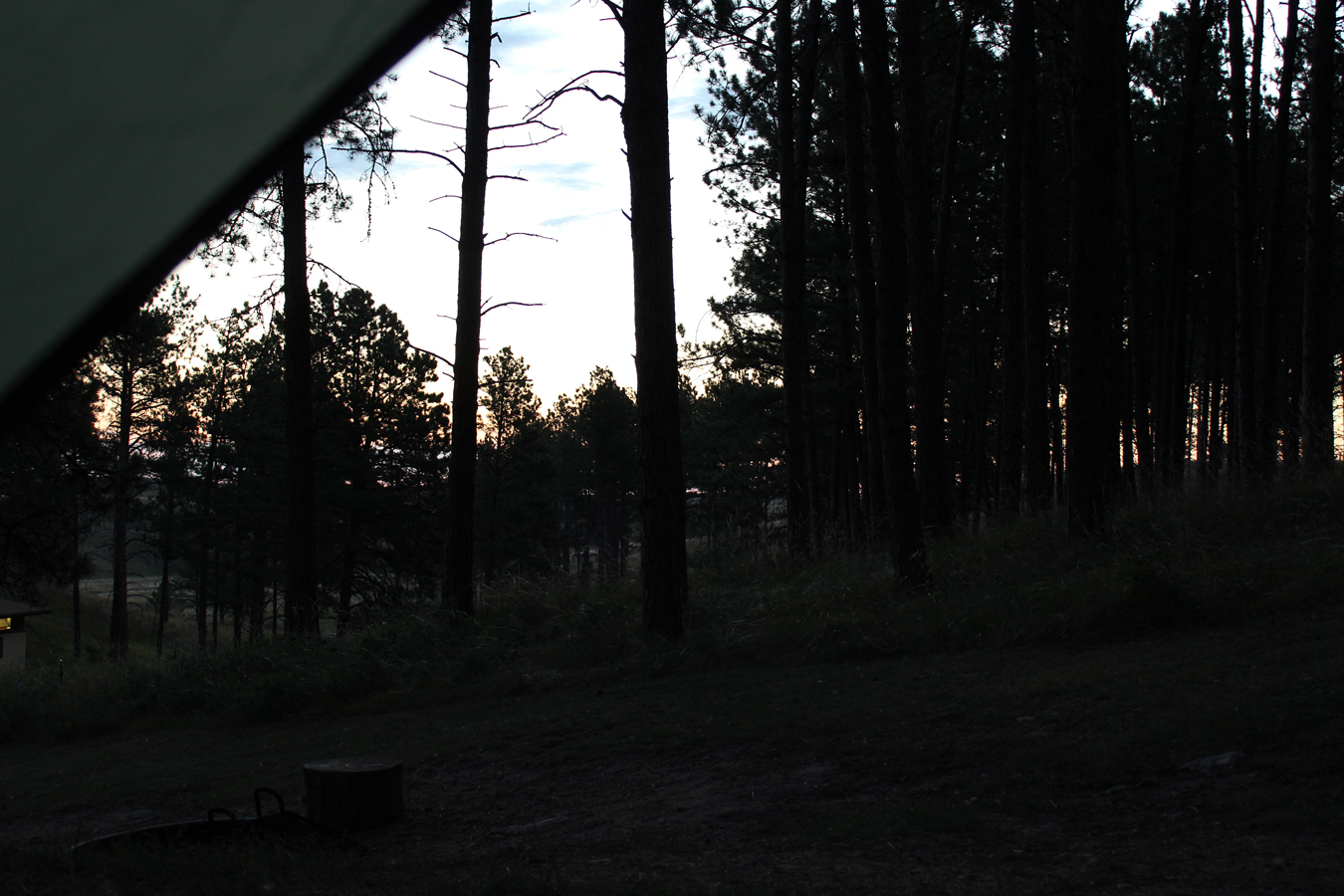 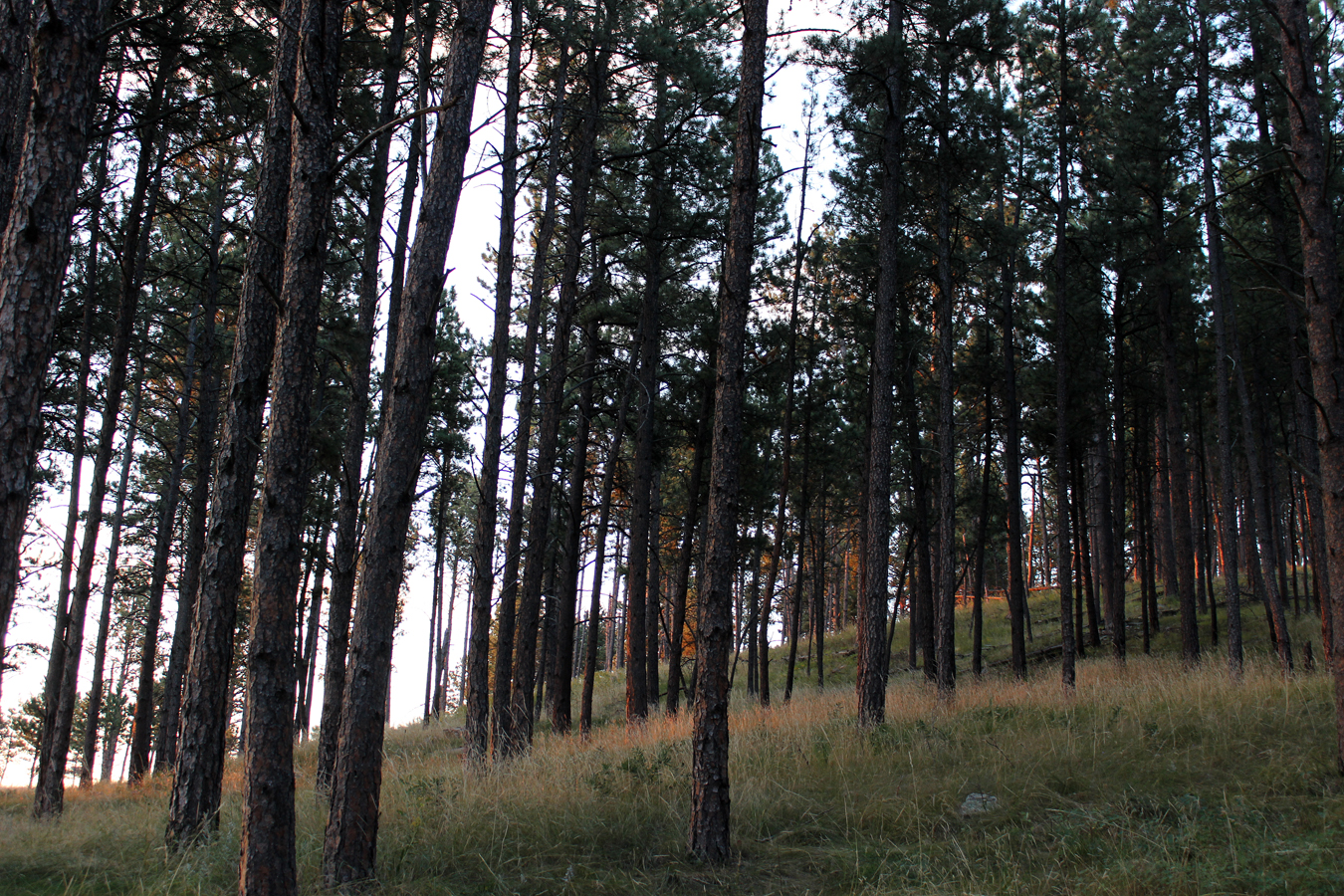 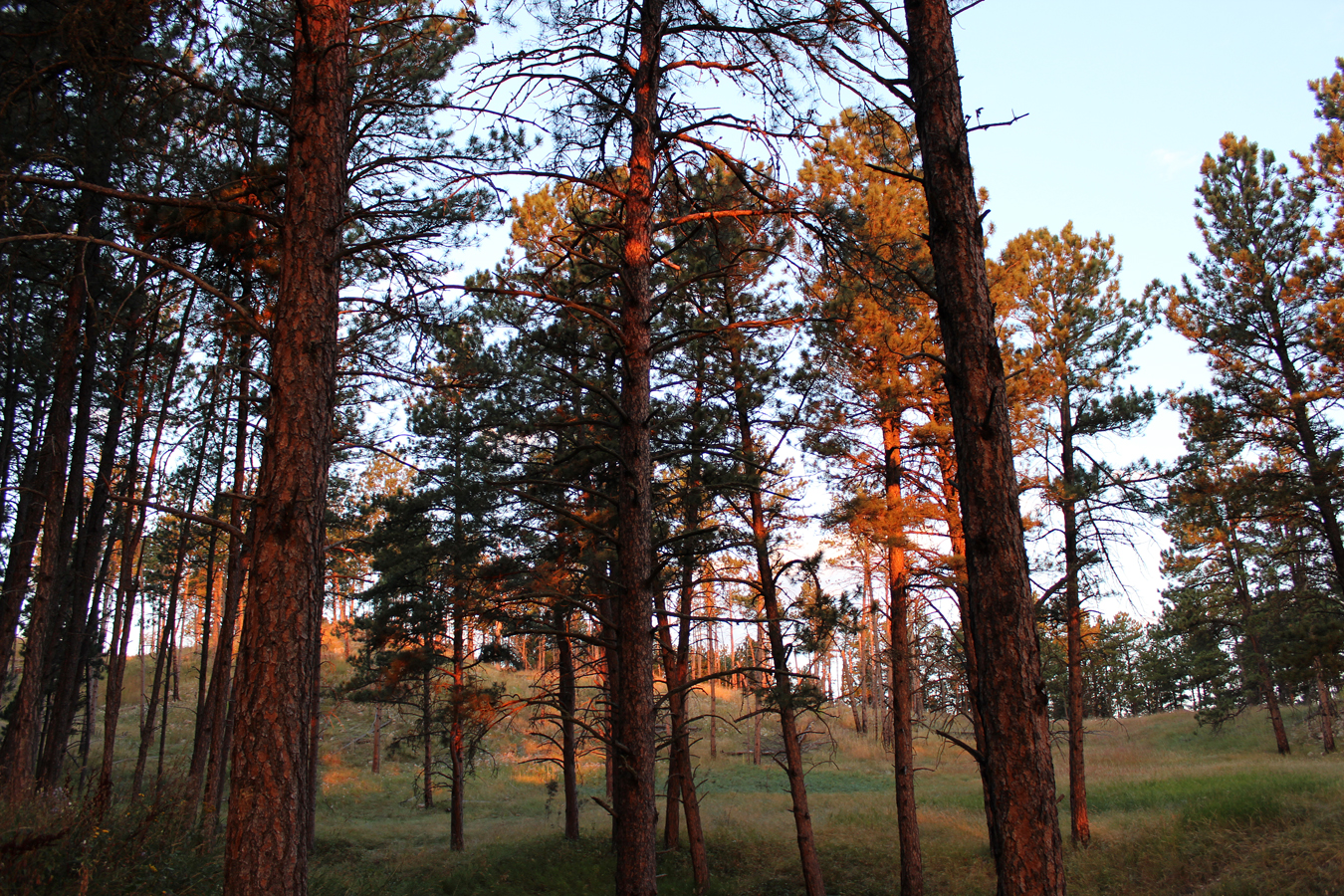 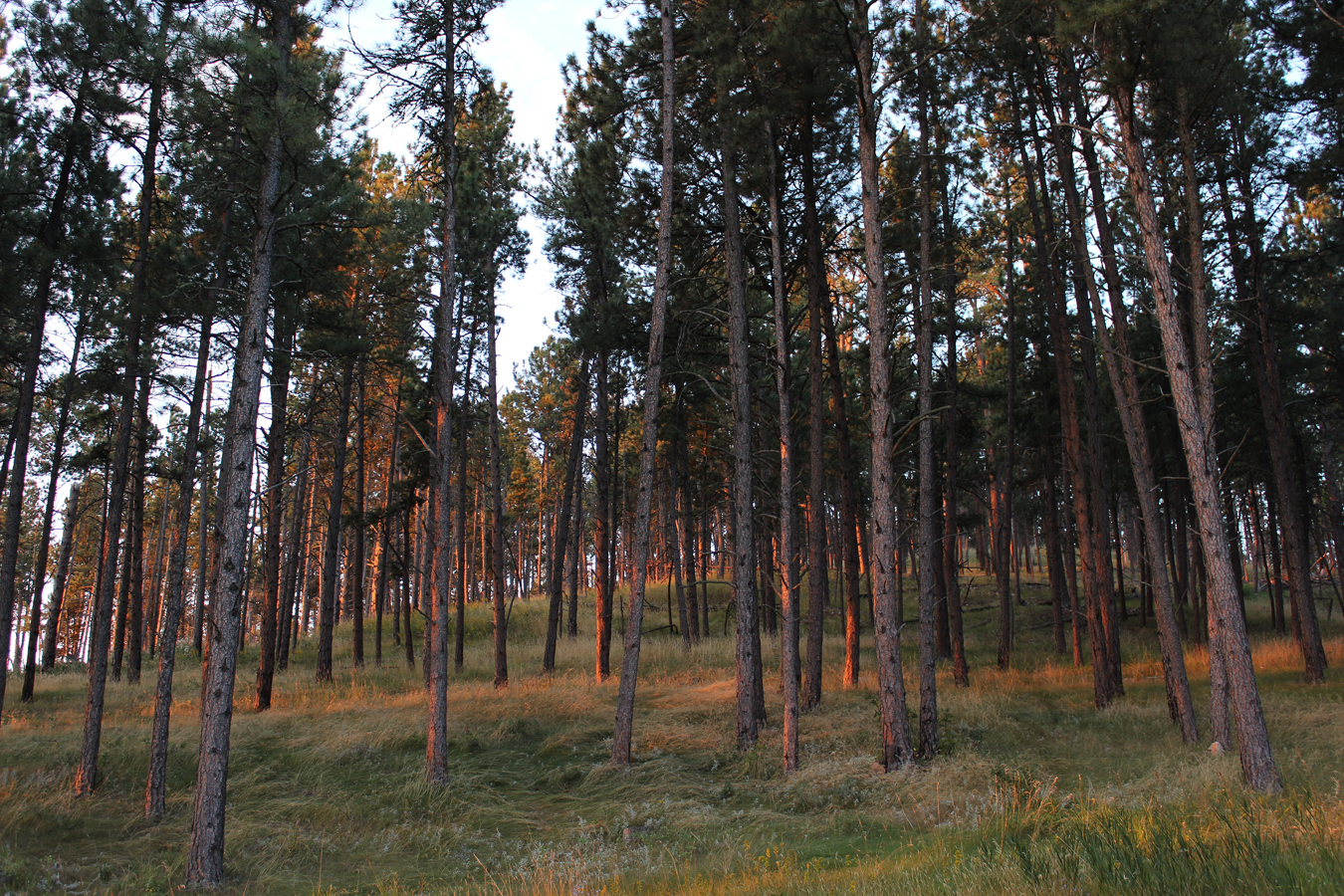 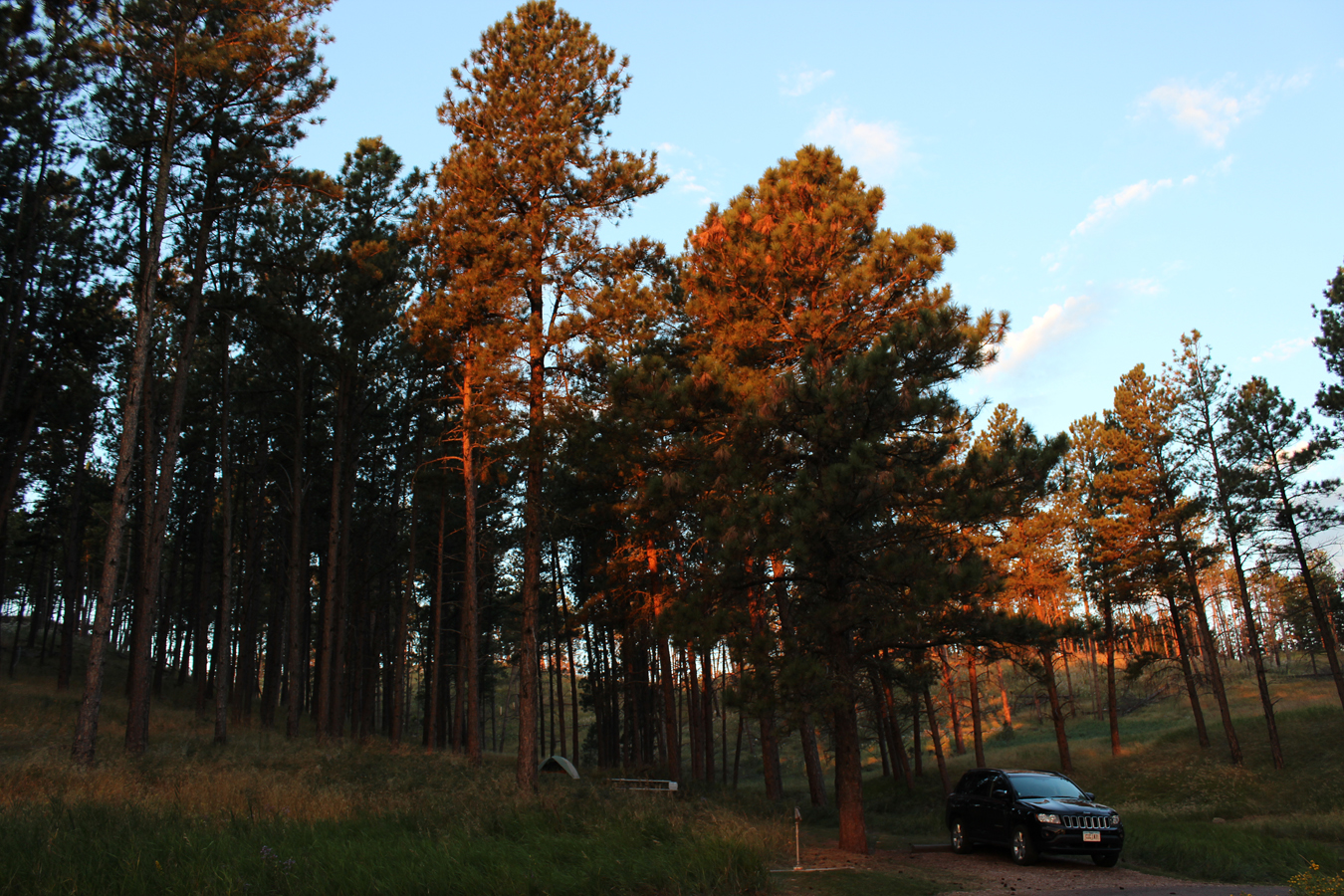 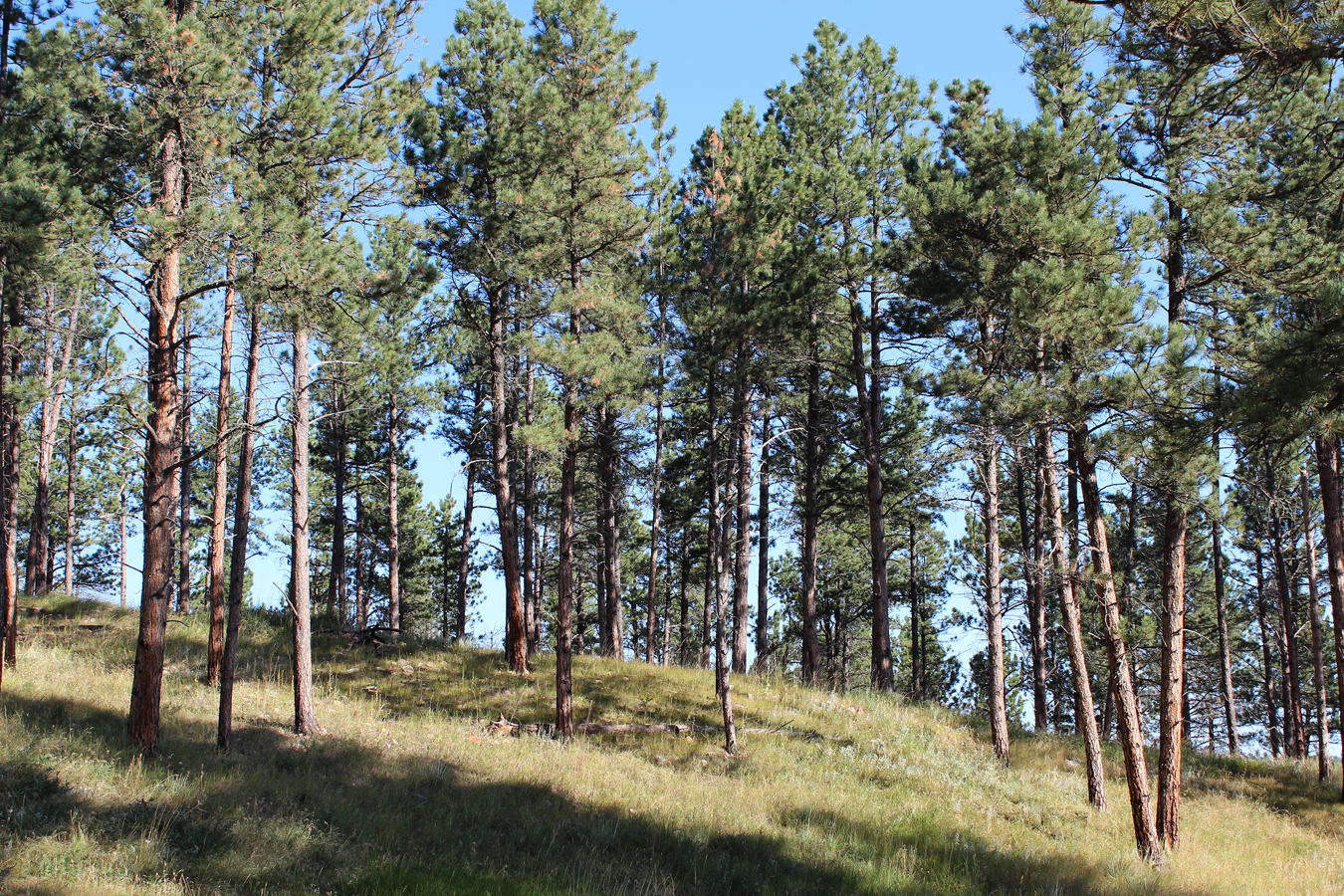 After breakfast in camp, it was time to go underground.