I awoke on Saturday, September 6, before sunrise, to the sound of birdsong echoing from either side of the shallow valley of Sage Creek Campground. Brilliant, hearty, melodic birdsong, which I would later realize came from Western Meadowlarks.

Sean was still sleeping, so I carefully rolled out of the tent, put on my boots, and zipped on my hoodie. The temperature had dropped quite a bit overnight.

Sage Creek Campground is situated as a large oval with pit toilets at the north and south ends and most of the tent sites within the middle of the oval. It is almost completely surrounded by the federally-designated Sage Creek Wilderness.

The bison that we’d seen bed down the previous evening were up and grazing quietly in the growing light. The campground was still quiet, so I settled in at the picnic table, facing outward, east, to catch the sunrise. I practiced and played around with various lenses in the half-light. While I waited, particularly I tested different exposures to capture a huge bull bison that was grazing along toward the south just across the road from our campsite.

Everything was quiet save for the singing of the meadowlarks and the sound of the bison munching prairie grass.

Then the bison I was focusing on, turned suddenly and walked up onto the road.

I thought, Oh, good! He’s going to walk along the road to join some other bison grazing near the southern end of the campground. I can get some good shots of him out of the tall grass.

But then, when he was about even with where I was sitting, he turned suddenly and headed purposefully, calmly, but unmistakably toward me. 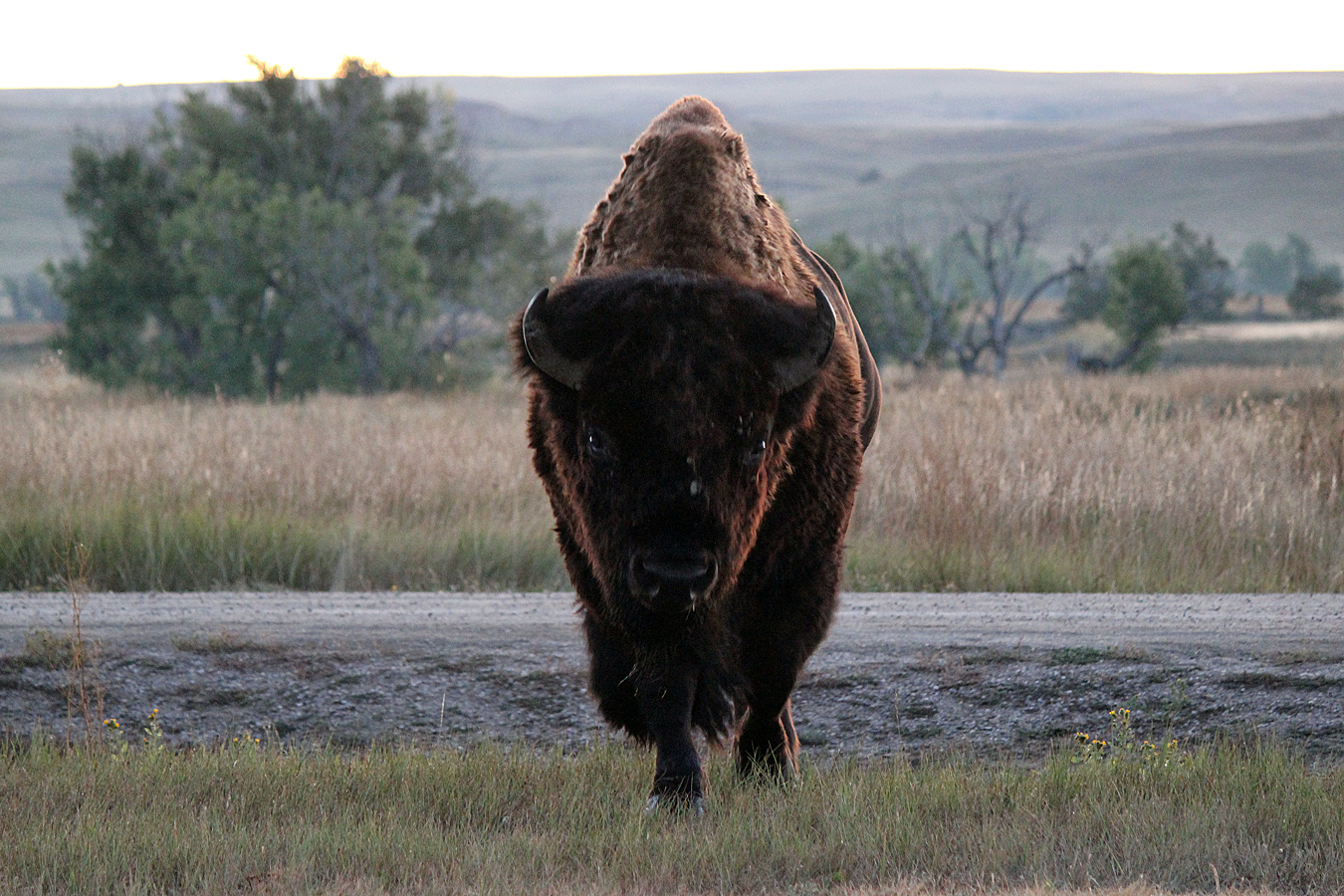 I froze for a moment in disbelief, but then quickly moved to the other side of the picnic table from him. He continued right up and stopped just on the other side of the table, turning his head to look at me. Just quietly assessing me. And occasionally snorting gently. His beard was damp from the morning dew on the grass he’d been eating. And his hot breath clouded in the chill air. 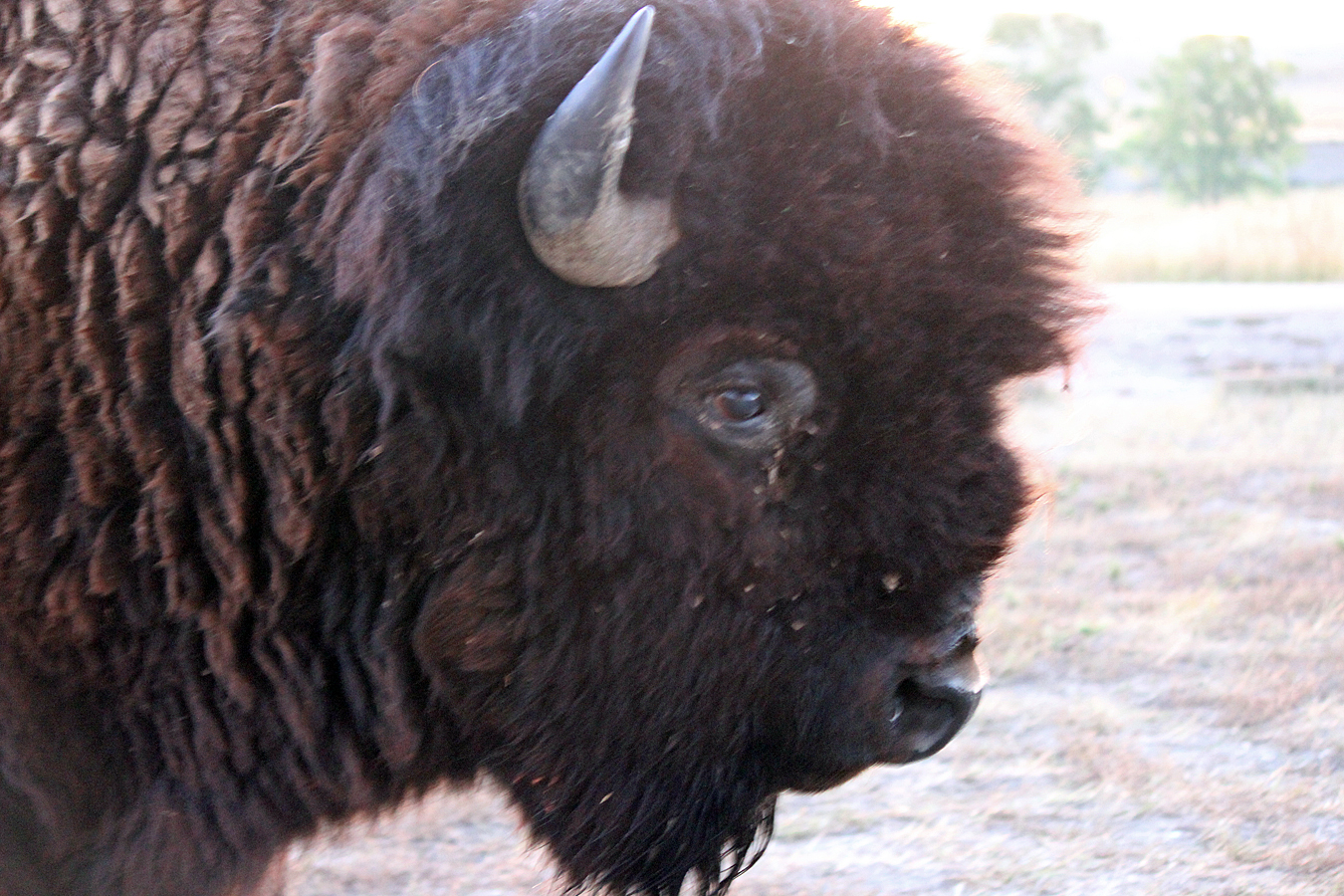 I was thrilled, but my heart was pounding with adrenaline. I did manage to reach out and grab a different lens (the image above was taken with the telephoto lens still on my camera) in order to better capture how close he was standing.

At one point, he burped.

He continued standing there regarding me for several moments. I didn’t want to call for Sean to look out of the tent because I didn’t want to startle the bison. (Sean would say later that he was half awake while this was happening and heard the bison’s snorting, but thought that he was still across the road.) I also didn’t want to just stand there snapping photos, so I set the camera down while we stared at each other.

Then, with another gentle snort, he turned to the southeast and headed back up, over, and across the road to continue grazing.

I snapped the photo below from where the bison had just been standing looking at me across the picnic table. It was my second uncanny encounter with wildlife in a National Park. 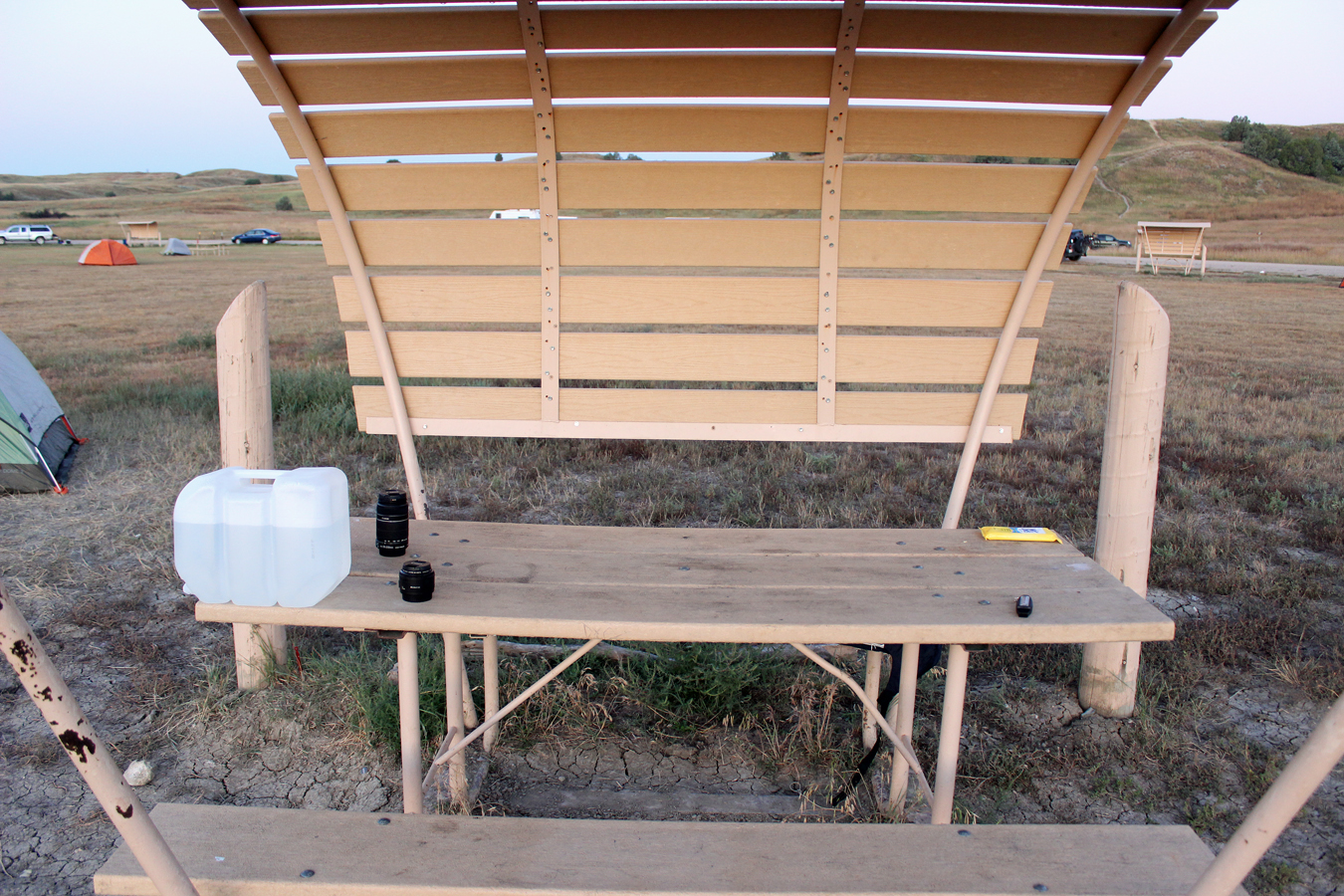 After he’d left and my heart had stopped beating in my ears, I settled back in for the sunrise, which was throwing gorgeous light across the valley.

Once the sun was up, the campground began stirring in earnest. The bison who’d visited me started snorting at another bull who was grazing near him, also just across the road from us. Tails went up, and more earnest snorting began. At this point, I loudly whispered, Sean! Sean! Wake up! because I didn’t want him to miss whatever altercation was about to take place. The second bull began wallowing, which is a sign of deflection in a potential encounter, and soon they both calmed down and continued grazing.

As the coffee was percolating, I finally spotted the source of the birdsong.

While we were breakfasting, another bull bison wandered into the southern end of camp, but this time just to graze the shorter grass, not to regard anyone. 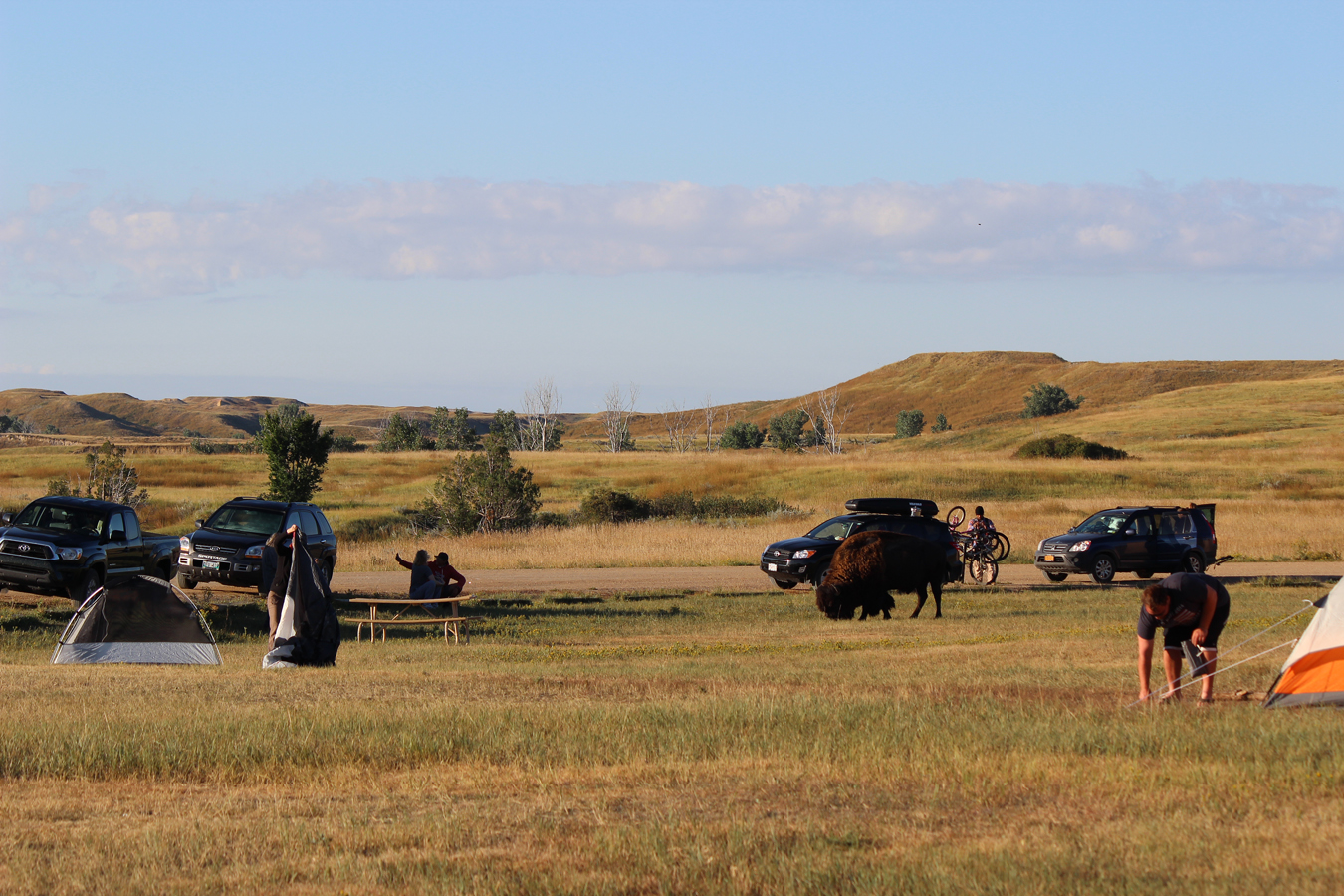 We counted about a dozen bulls strung out along the rolling hills encircling camp that memorable morning.