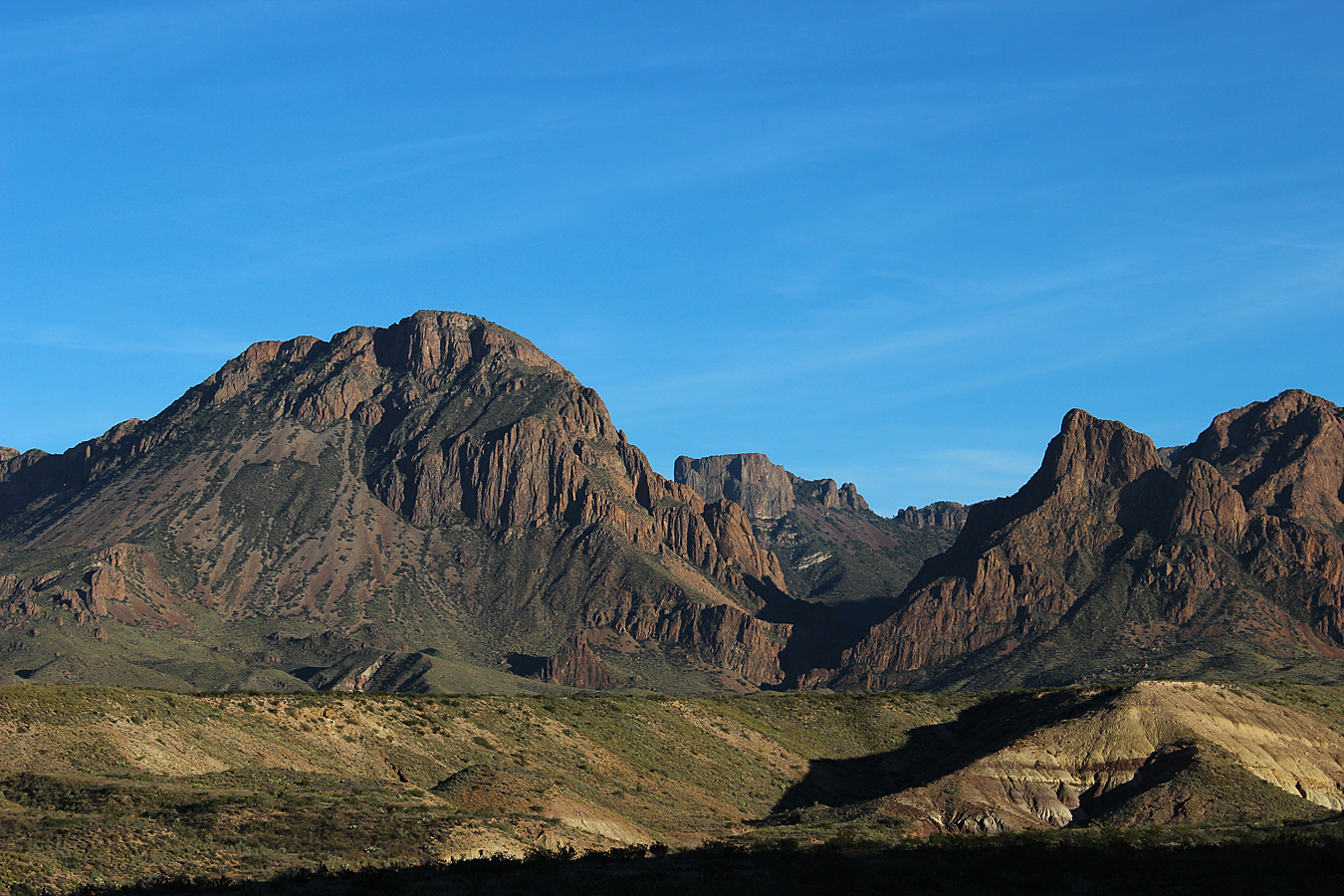 Big Bend National Park is massive. Established in 1944 on 801,163 acres along a great curve of the Rio Grande in far southwest Texas, it is larger than Yosemite. It contains hundreds of thousands of acres of Chihuahuan Desert as well as entire mountain ranges, canyons, mesas, and of course, the US side of the Rio Grande. The best, most famous description of the park is quoted in the Official Handbook, which I actually did not read until we returned from our trip. This poetic description of Big Bend is attributed to a 19th century Mexican cowboy:

Where the rainbows wait for the rain, and the big river is kept in a stone box, and water runs uphill and mountains float in the air, except at night when they go away to play with other mountains…

In the weeks leading up to our trip to Big Bend National Park, I’d quipped, “If you’d ever told me that I’d be excited to spend my 35th birthday in Texas, I’d have told you you were crazy.” My only previous experiences with the state involved sometimes lengthy layovers at Dallas-Fort Worth airport. Not the thing to spark the imagination.

But I’d decided that I wanted to turn 35 in a National Park, and Big Bend was one of two (the other being Capital Reef) that appeared to fit the criteria that a) it not be too cold to visit for a mid-November birthday and b) it not be a park that friends had expressed interest in visiting with us. Big Bend won out because it promised to be warmer and because the flights to and from El Paso were very reasonable.

Suddenly Sean and I were planning a four-day trip to Big Bend. I was also somewhat astonished because I’d always assumed that I’d visit Guadalupe Mountains National Park first, since it is right at the top of my list of most-anticipated parks. But we want to share Guadalupe Mountains and the adjacent Carlsbad Caverns with friends. So Big Bend came first.

In reading and planning for the trip (choosing hikes and sites that we didn’t want to miss) I soon realized four days would be far too short. So I began to rank things loosely based on must-sees or optionals. We knew that Tuesday night, our final night and also my birthday, we wanted to stay at the lodge. We also knew that we wanted to backpack in the Chisos Mountains at the heart of the park for at least one night, likely Monday. And we would then camp in one of the three developed campgrounds Saturday and Sunday nights.

After reading and researching a bit, I decided that we should stay at Cottonwood Campground, along the Rio Grande on the park’s west side, since a) it was the smallest (30 sites versus 100 sites at the other campgrounds), b) it was along the river so it would be good for birding, and c) it was near the end of the Ross Maxwell Scenic Drive, which encompassed many of the day hikes we were interested in.

We packed and prepared through a busy early autumn for both of us at our respective jobs, and for me through the early stages of rehearsal for an opera. And on Friday evening, November 8, we flew to El Paso.