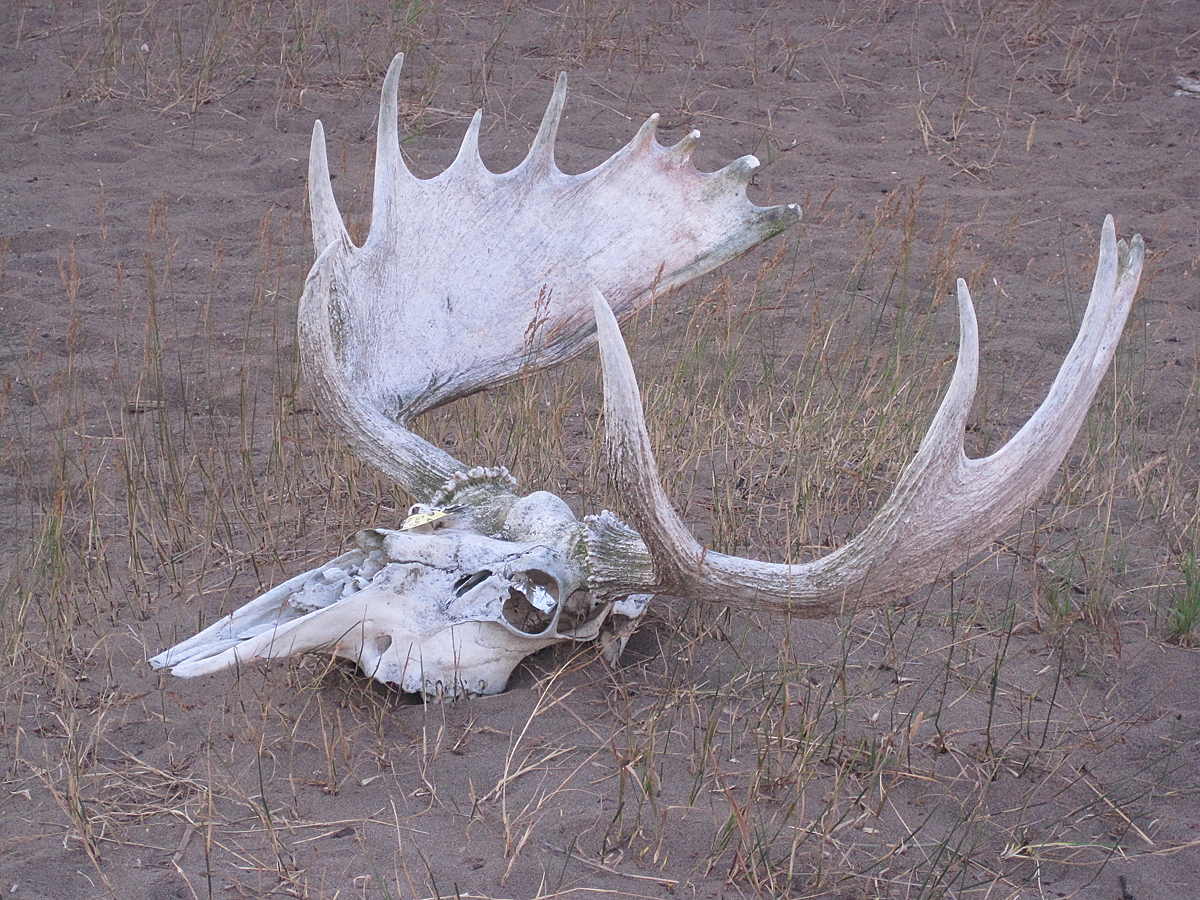 Back in camp, we decided to relax and then have dinner early enough to make sure we were finished in time for Candy’s interpretive program at 8pm.

I tended to my three severe blisters while the other guys filtered water and prepared a buffet of various dehydrated meals. 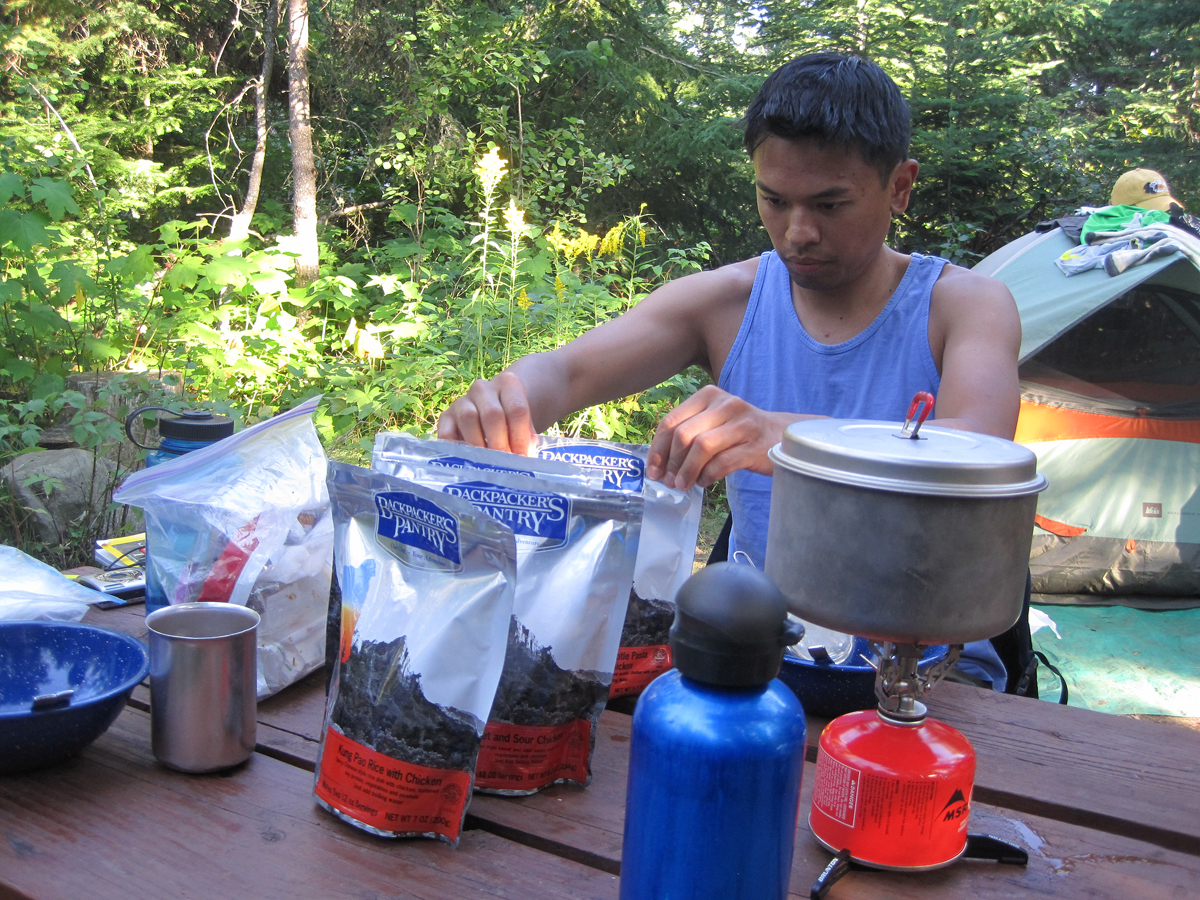 After dinner, we walked down to the dock. Phil, Sean and I took the beach route, and Adam, who was running a bit behind, took the trail. As we approached the dock, we didn’t see anyone, so for a moment we thought maybe there wan’t a program after all, but then we rounded the curve and saw that it had already started.

A group of about forty people were sitting or standing on the dock, while Candy Peterson, standing with a line of animal bones displayed in the sand, was speaking about moose. In her mid-sixties, she was neither the twenty-something nor the park ranger we had been expecting. 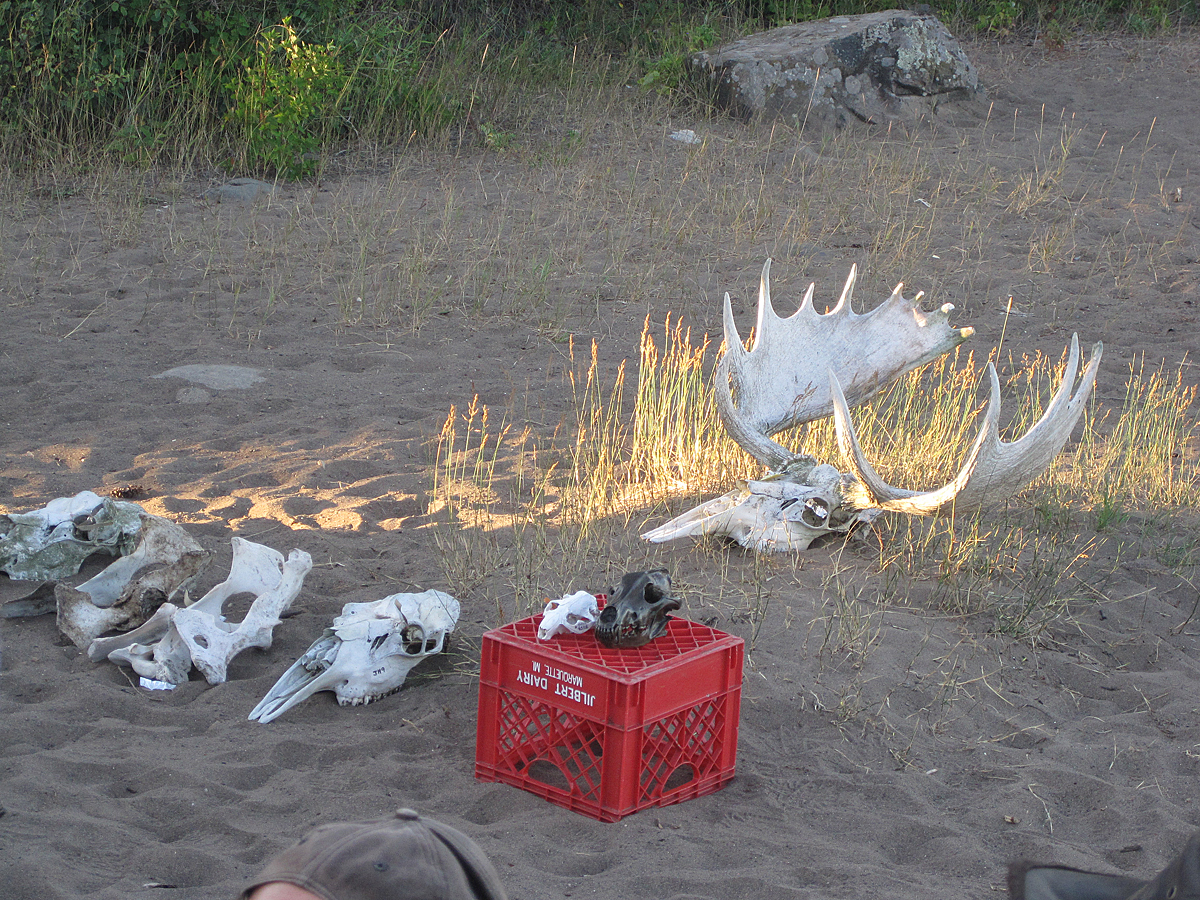 Candy turned out to be the wife of Rolf Peterson, long-time project leader of the Isle Royale wolf-moose study.

Currently there are about 600 moose on Isle Royale, but only twelve wolves, and the researchers fear that all twelve might be male. Candy discussed the huge die off of wolves on the island in the early 1980s, when canine parvovirus, carried by a dog brought illegally to the island on a private boat over 4th of July weekend in 1981, caused the wolf population to plummet from fifty to fourteen.

Although the wolves never fully recovered, they were doing quite well by the late 1990s, but 1996 was an unusually harsh winter, causing a huge die off of moose. There are fewer old moose, perfect prey for wolves, now because of all the calves lost fifteen years ago.

Inbreeding is also a problem for the Isle Royale wolves. Every wolf alive on the island today is descended from one male who crossed an ice bridge from Ontario in 1998, just as the earlier generations were descendants of a single female that first inhabited Isle Royale in the late 1940s. 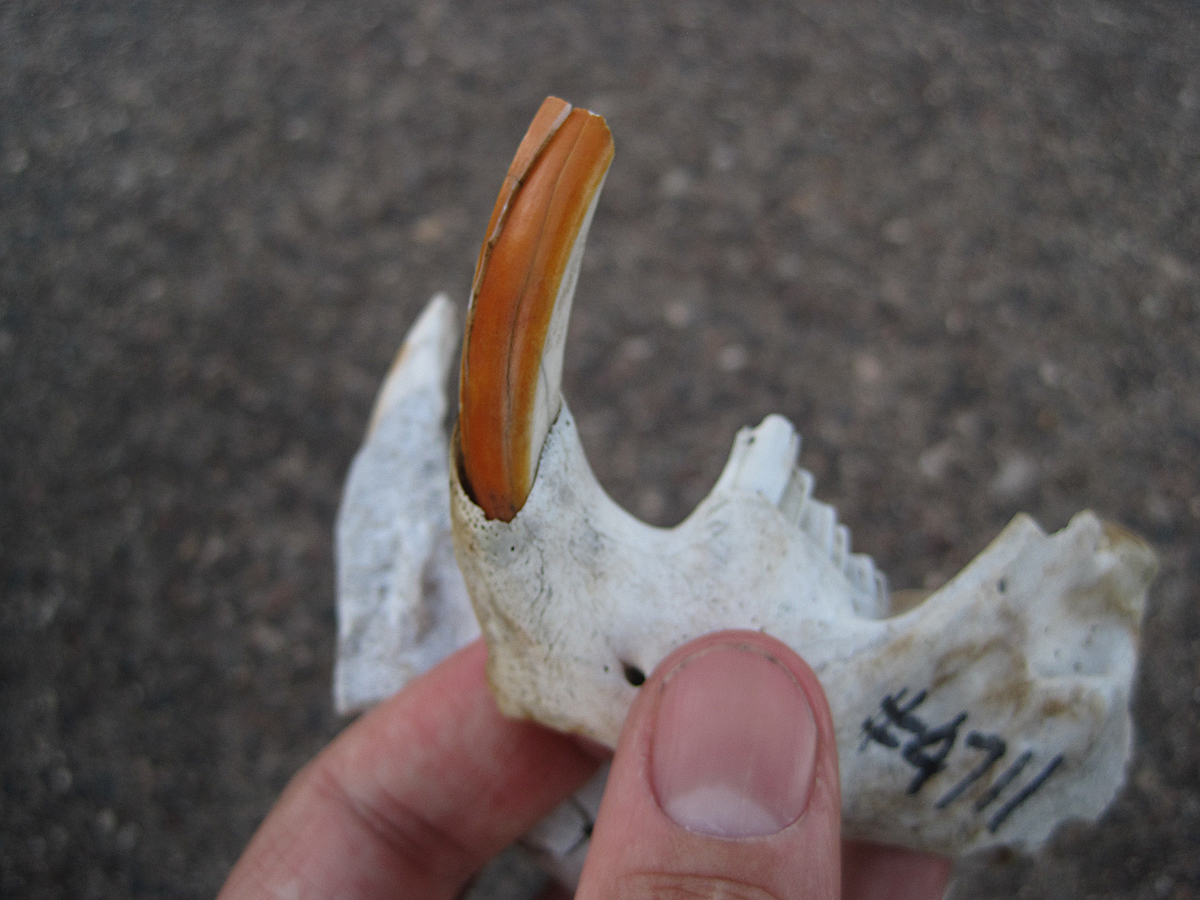 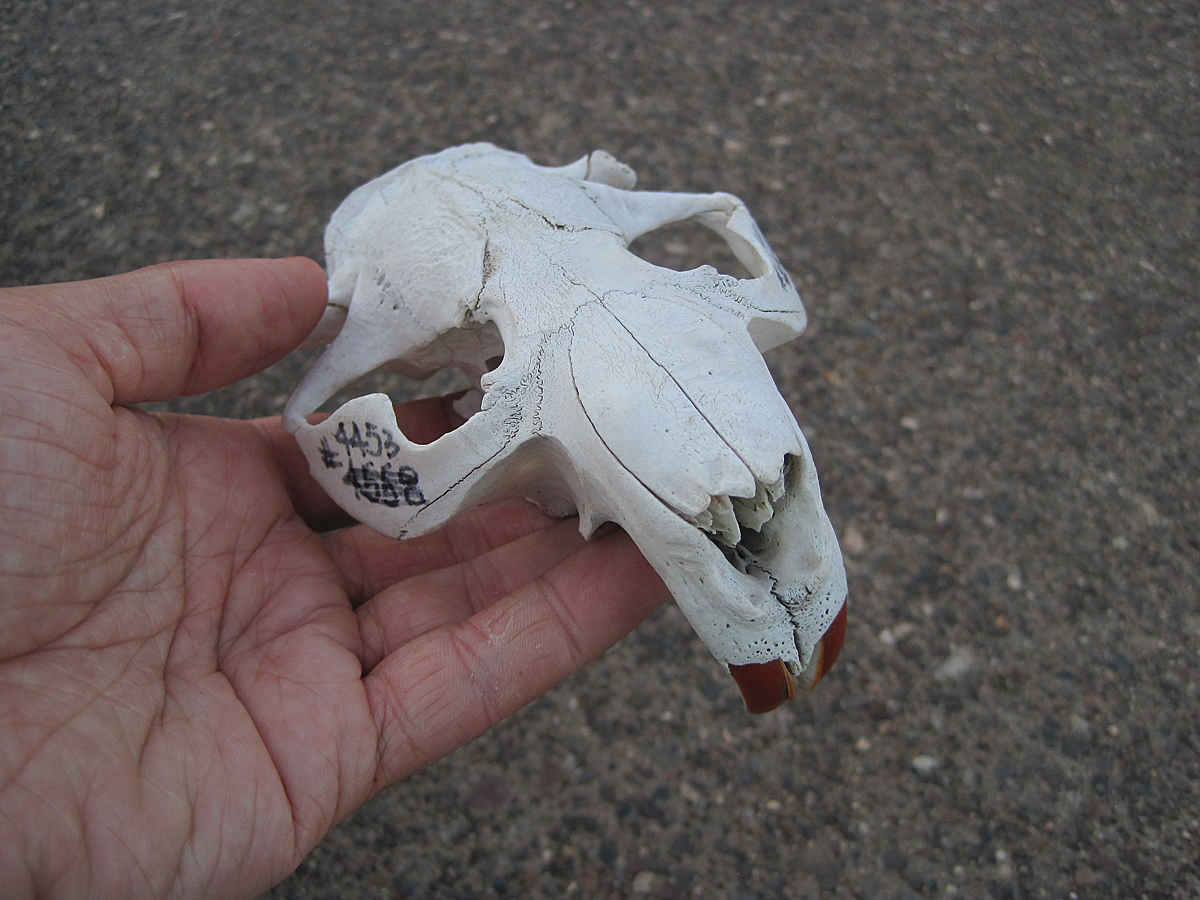 Candy discussed the relationship between moose, wolves, and the other fauna (and flora) of Isle Royale. She talked about how beavers will dam a creek to create lakes to protect their lodges, causing the flooded conifers to die off. This creates room for wetlands, complete with Sandhill Cranes, perfect habitat for moose to feed.

When beavers abandon a lodge, the area reverts back to open land, and the forest begins to take over again as birch and poplar spring up. Often wolves will use abandoned beaver lodges as a place to raise a litter of pups.

Wolves help to cull the old and the infirm from moose populations. Candy showed us infirm and healthy moose bones, some with abscessed teeth, others with severe arthritis. 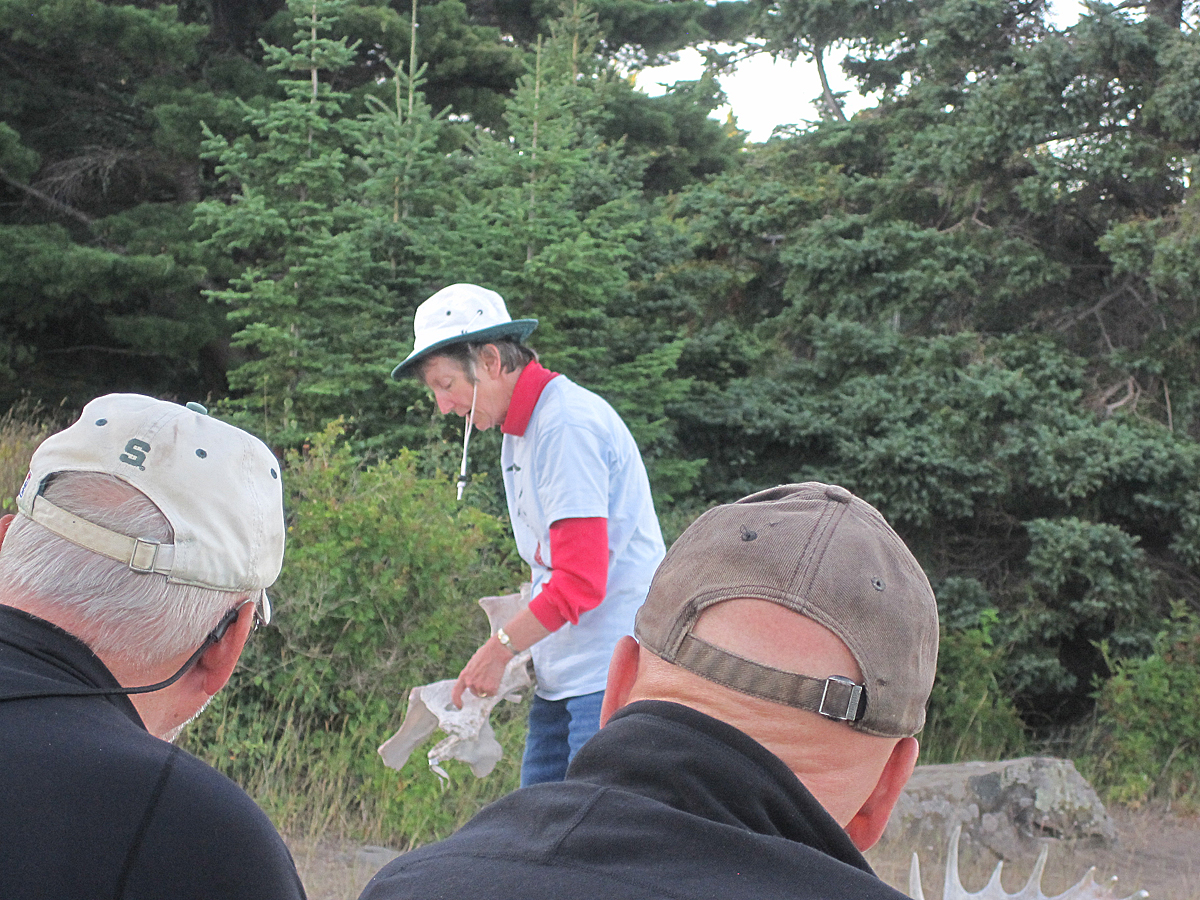 A question, first raised after the parvovirus die off but almost more pertinent now, is what the park service should do if wolves become extinct on Isle Royale. Reintroduction of wolves would violate the “leave nature alone” directives that the NPS currently operates under. However, the extinction of wolves would leave the island without a top predator, and the moose would likely exhaust their food supply. It’s estimated that in the early 1930s, before a devastating wildfire in 1936 and the arrival of wolves a decade later, the moose population was as high as 3,000.

It’s a complex question. It’s possible that wolves could cross from Ontario again, like the male who came over in 1998. As recently as 2007, an ice bridge connected Isle Royale to the mainland for several weeks. Unfortunately at that time, a male and a female left the island. And it’s difficult not to consider that the initial major population decline was caused by humans. 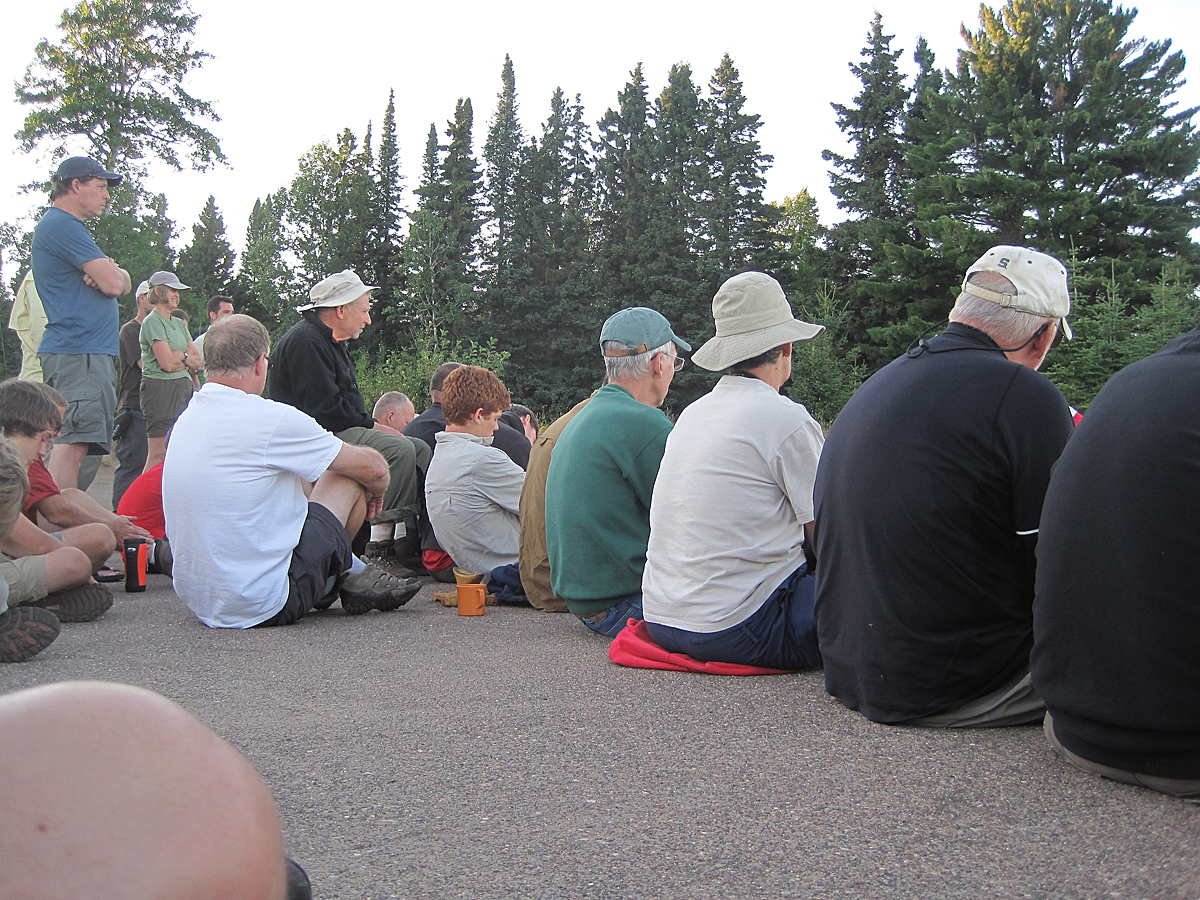 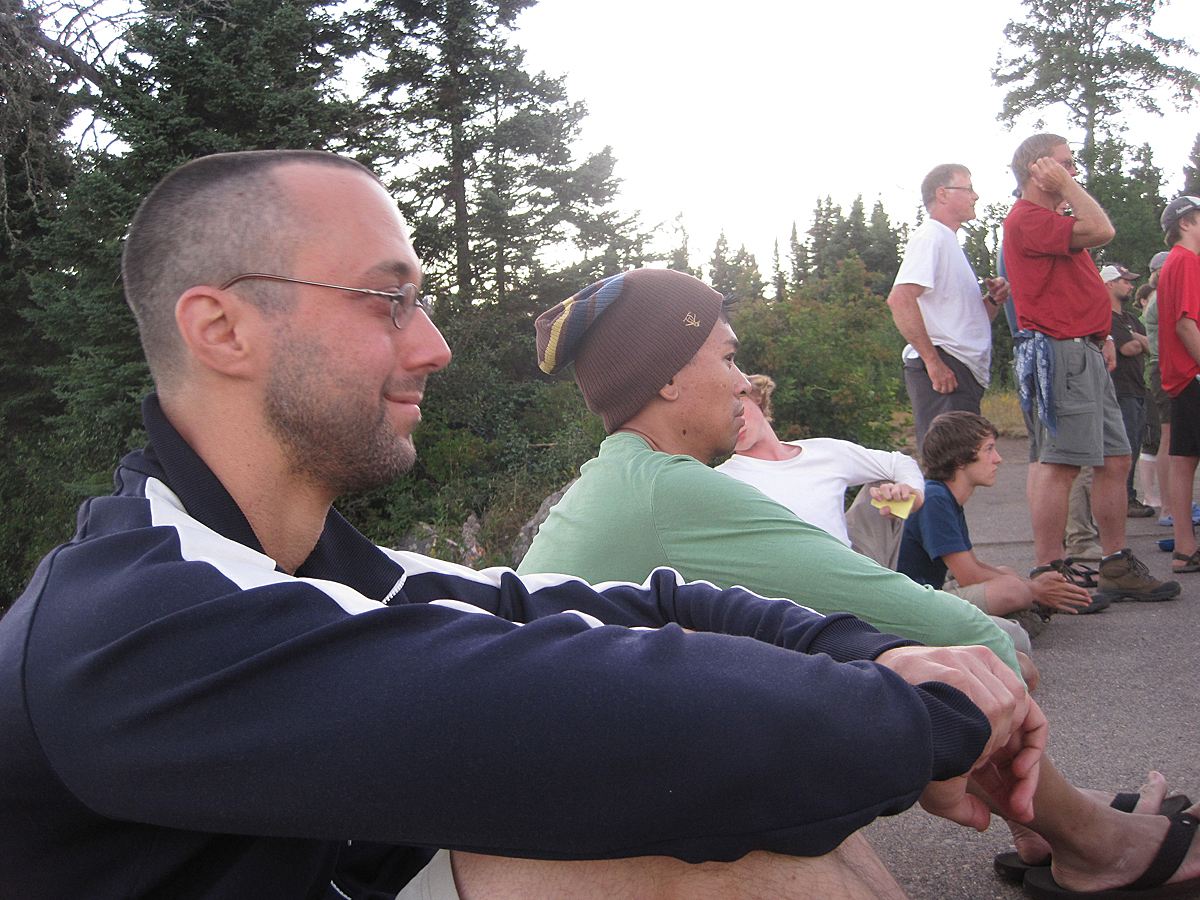 Over the decades that the Petersons, along with their fellow researchers and volunteers, have lived in the summers in Bagslund Cabin, immediately across Rock Harbor from Daisy Farm, they’ve collected hundreds of bones of moose, wolves, and other Isle Royale animals. She spoke of the importance or remembering that life, like all things, comes to an end, and that we are all part of the cycles of nature. 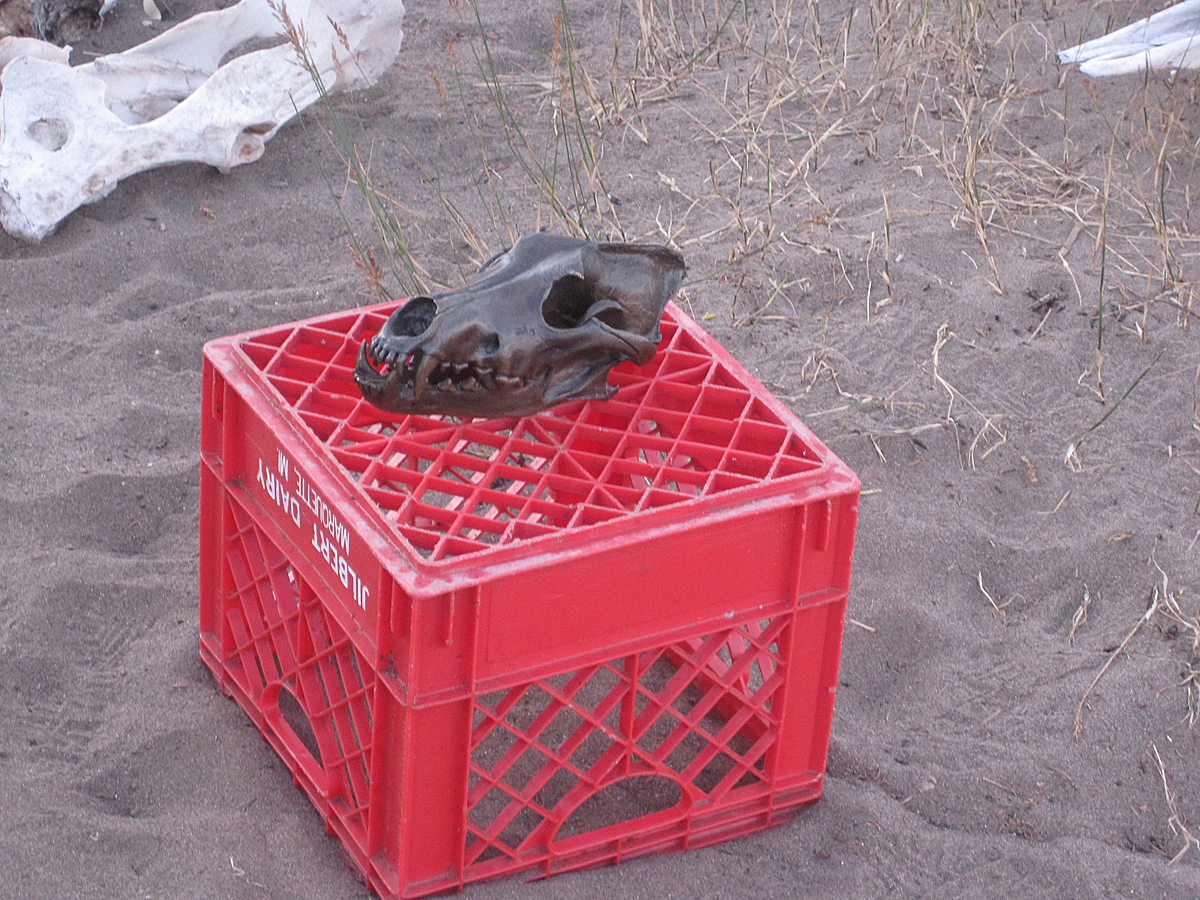 Candy mentioned that the gorgeous weather we were enjoying (sunny with a high of 77 degrees that day) was just awful for moose. It was too hot for them to do the active feeding (forty pounds a day) to build up fat reserves for the severe Isle Royale winters. “Forget the polar bear, if you want a poster-animal for climate change, look at the moose!” 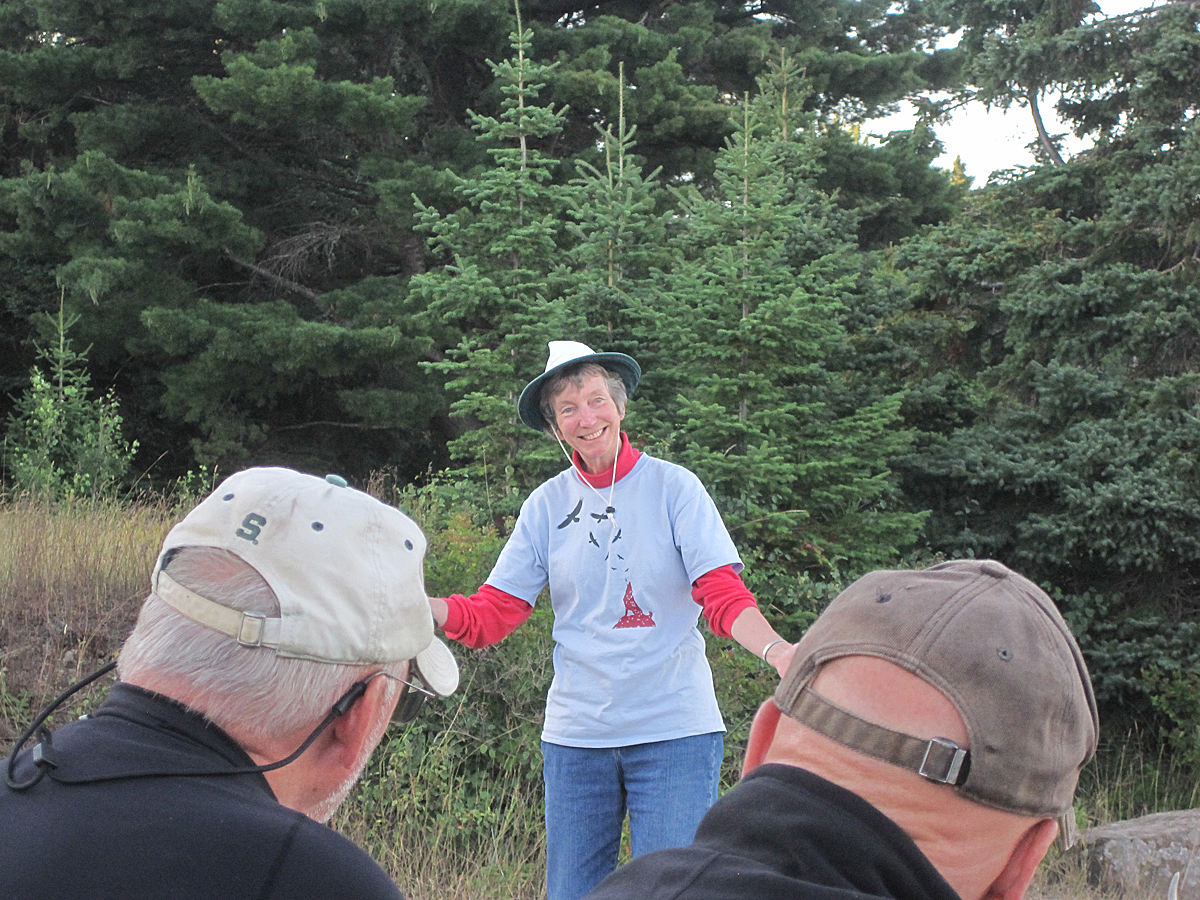 After a great question and answer session, Candy talked about how it was a tradition at wolf conferences to howl at the end of a meeting or session. She thought that was silly because humans don’t really know what the howls mean. She said that the closest we come to a group vocalization is singing. So she asked for two strong singers to help her lead a three-part round.

We all stood in a circle on the beach, and Candy passed out hand-written copies of the words and music of the traditional German song, “Music Alone Shall Live,” which neither Sean, nor Adam, nor Phil, nor I had ever heard. Candy led us in a few practices, and then we sang the song in a round three times. 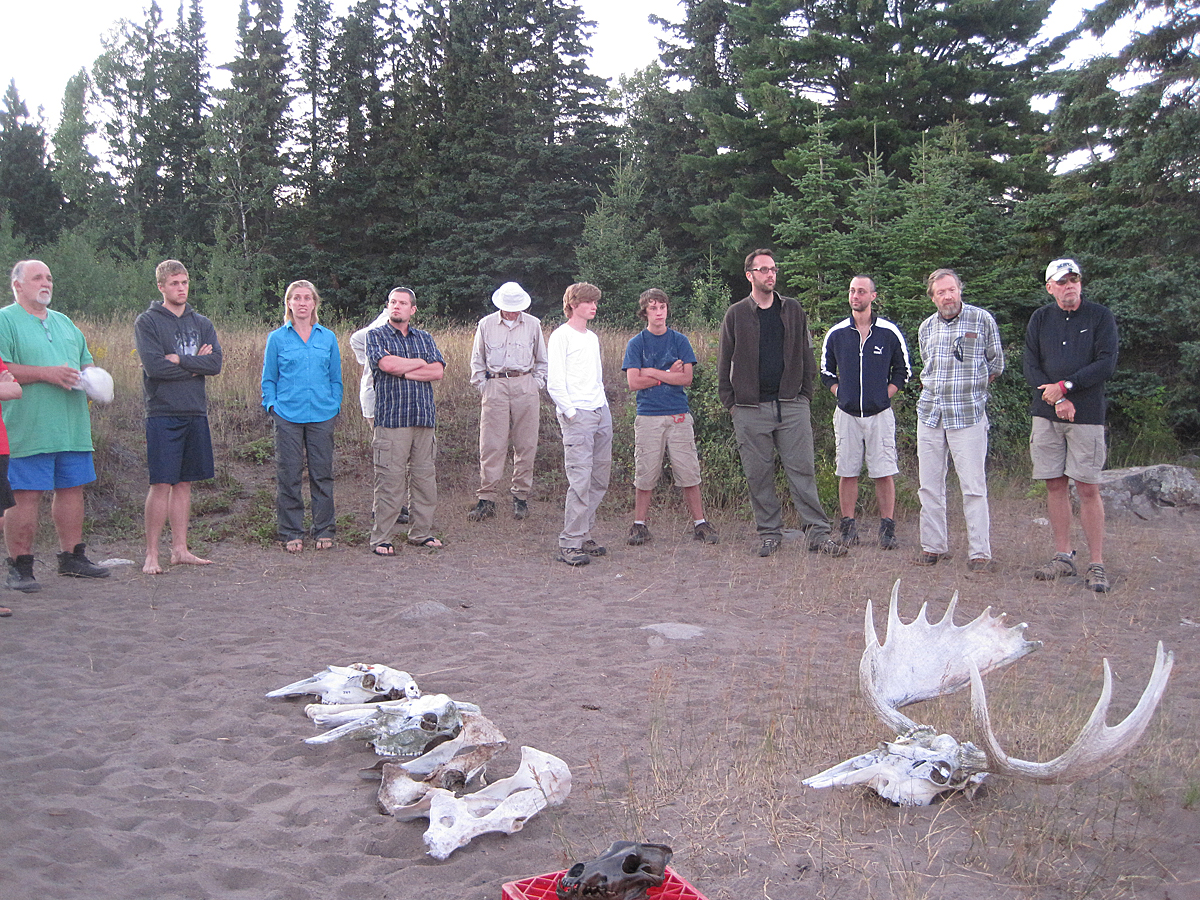 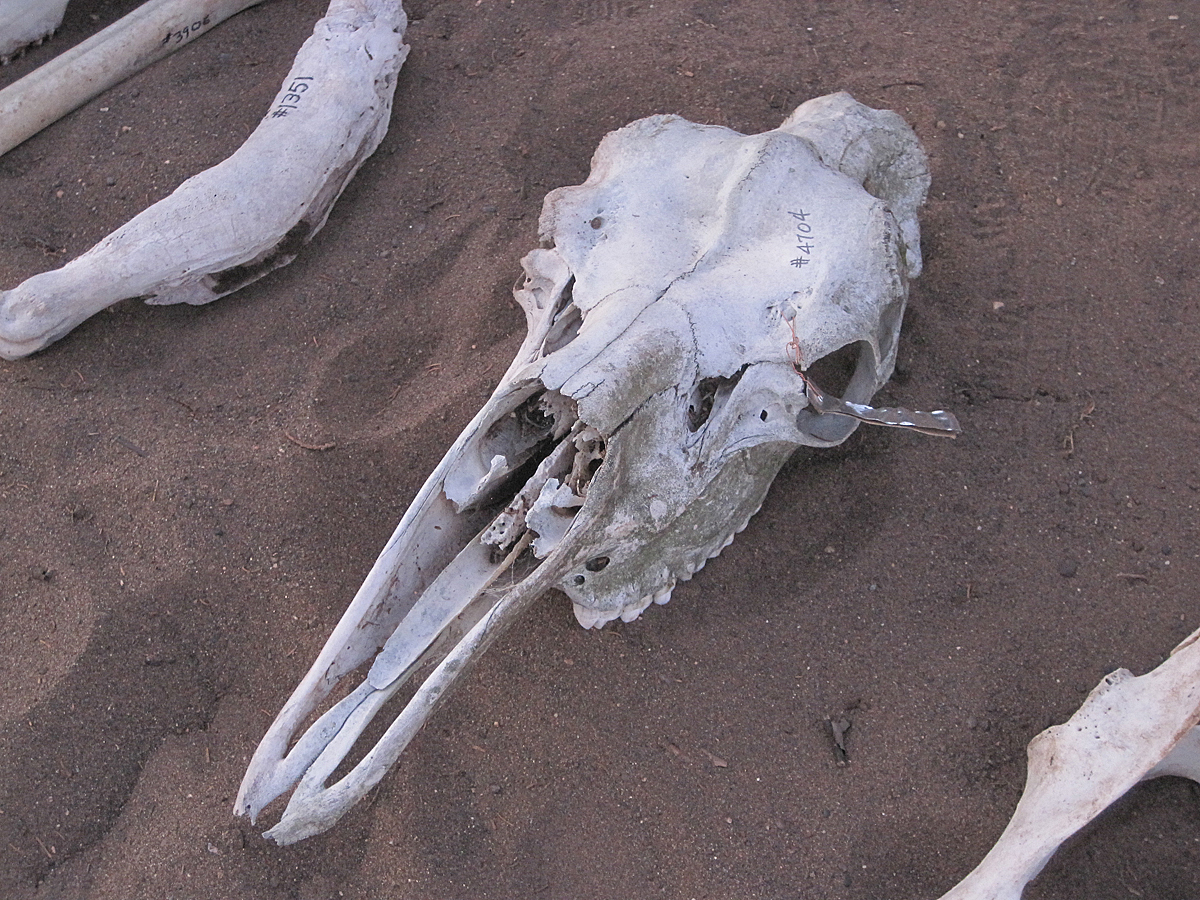 Afterward, attendees wandered back to their campsites or shelters, or stood chatting in small groups on the beach or on the dock. Some, including Adam, chatted with Rolf (pictured above, second from right) and Candy, asking questions about possible howls they’d heard, or about tracks or scat on the trails. Candy and Rolf stayed at Daisy Farm until it was almost too dark to motor their boat across the harbor to home.

We watched the twilight deepen from Daisy Farm dock, and then stayed to star gaze in the completely cloudless sky. Vega greeted us first, almost directly overhead, followed by the familiar summer constellations: the swan, the eagle, the dragon, and even Scorpio, huge with his tail dipping below the forest opposite us.

The Milky Way made its appearance just before the newly waning moon rose above Cemetery Island across the Harbor. 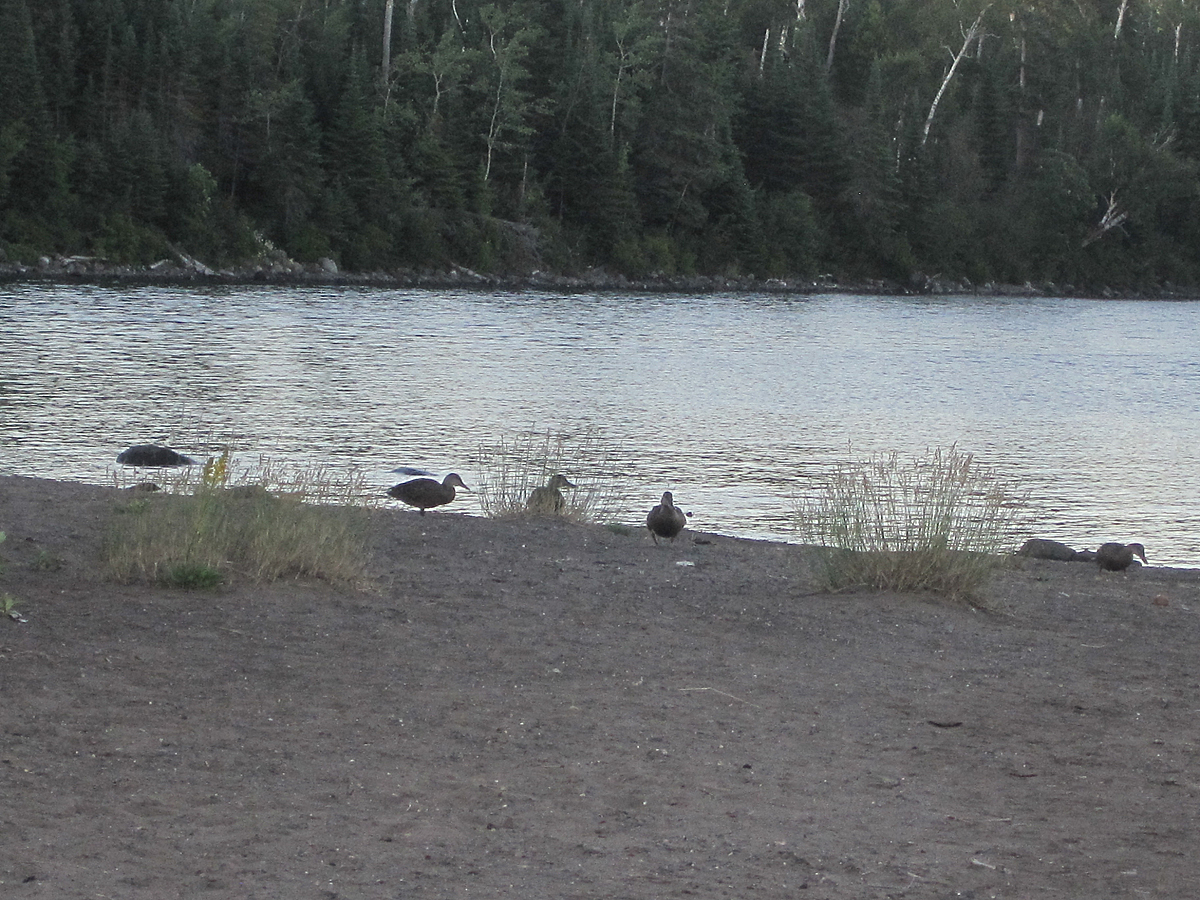 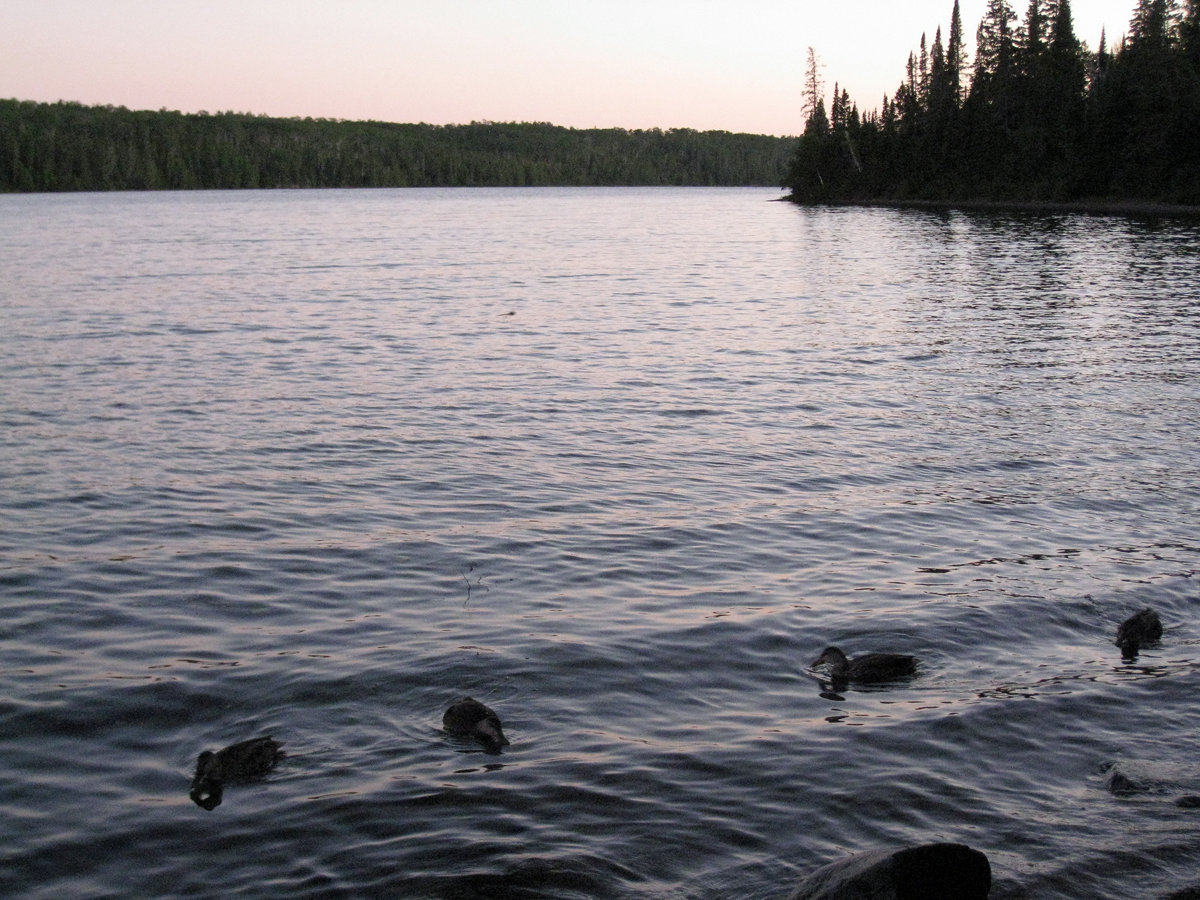 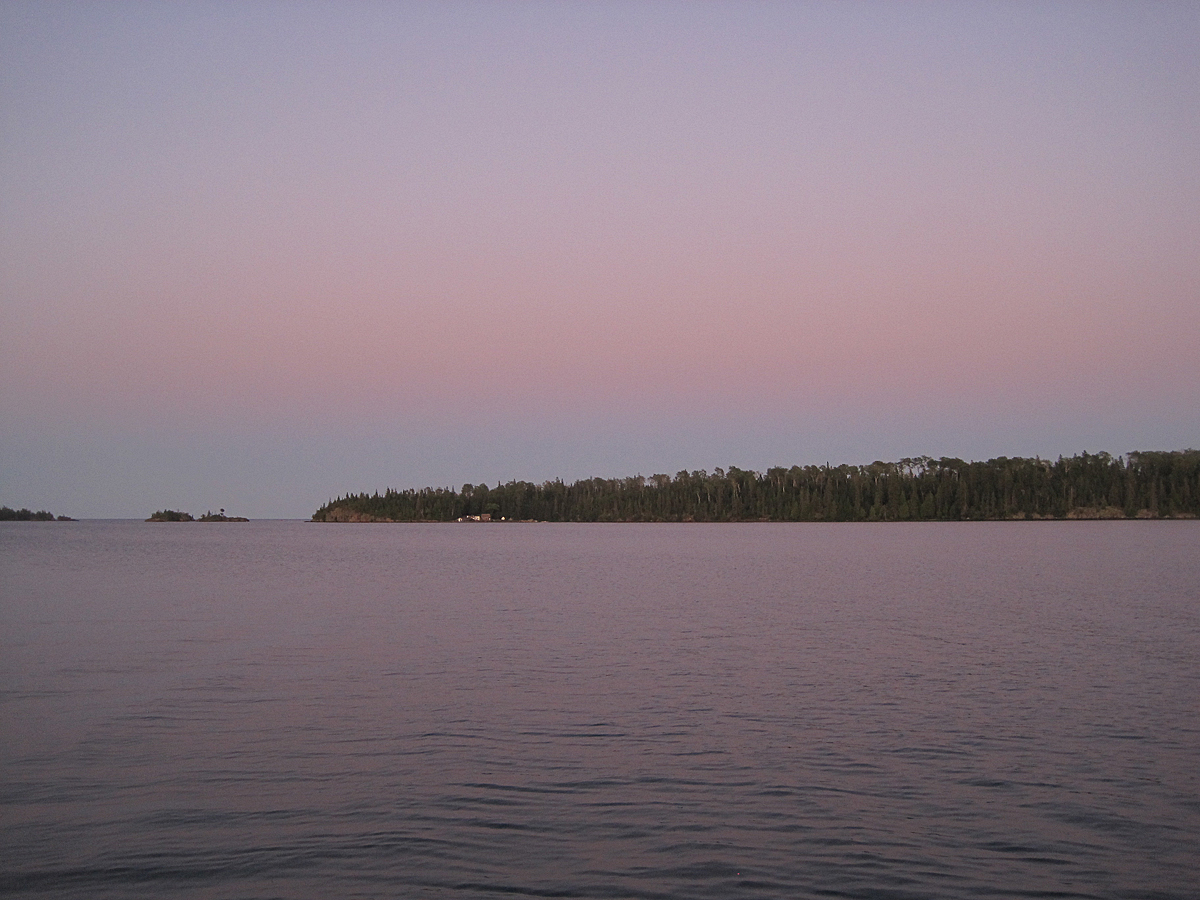 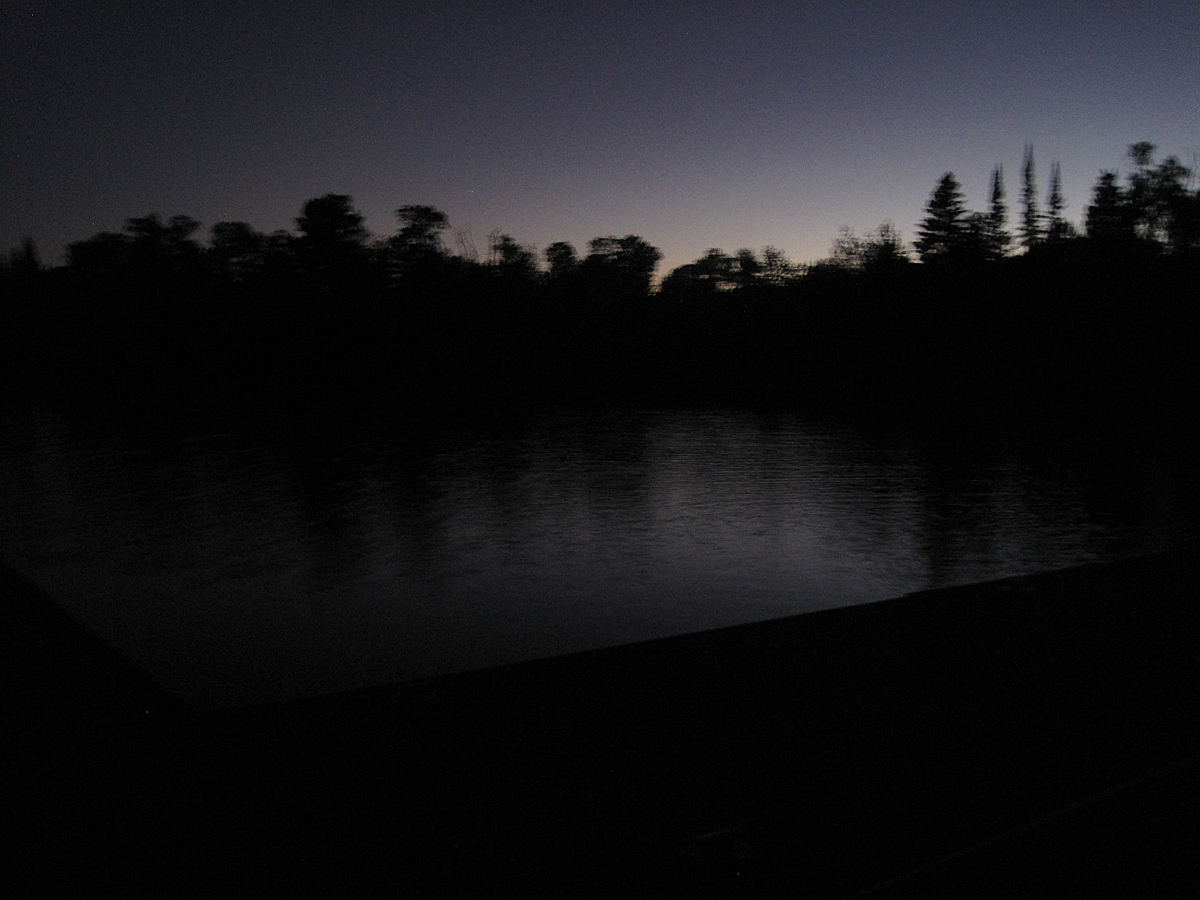 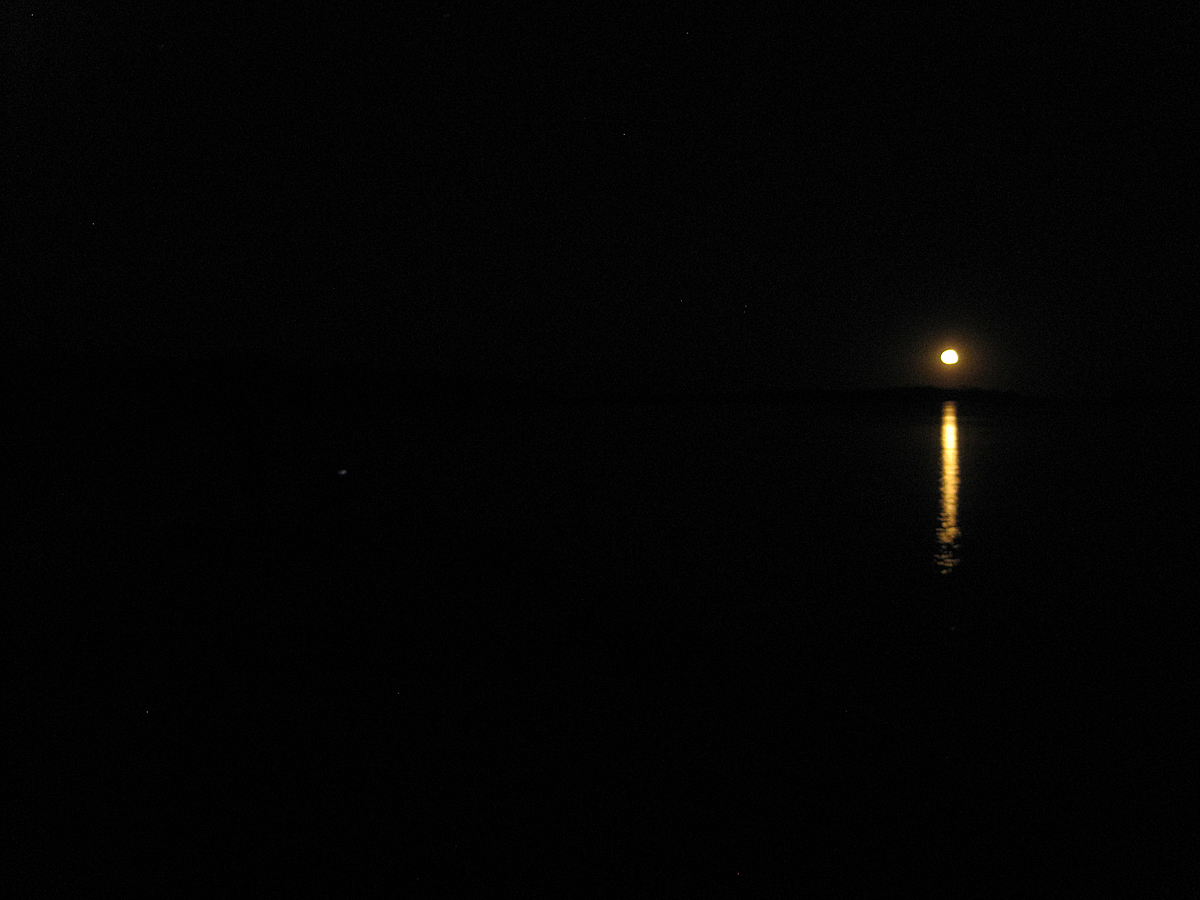