Our ferry would be leaving Santa Cruz Island at 4pm on Sunday, May 29, 2016, and all too soon it was time to board. And the next day we would return to Chicago, concluding a ten-day trip to California that had included visiting Patrick, going to Disneyland, and camping at Yosemite National Park.

END_OF_DOCUMENT_TOKEN_TO_BE_REPLACED 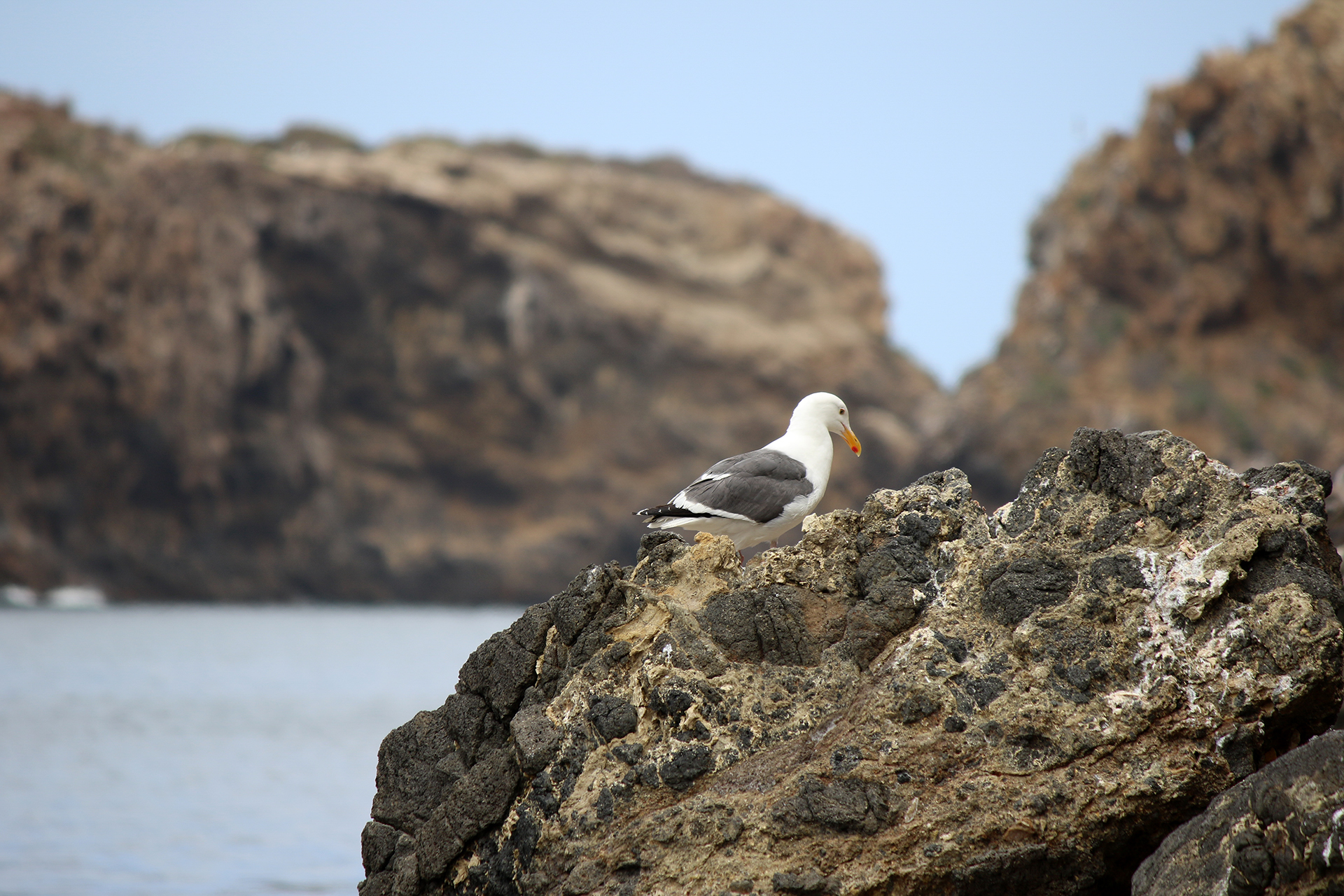 It was about 2:45pm on on Sunday, May 29, and we had about 45 minutes to an hour left on Santa Cruz Island before Patrick, Sean, and I would have to board the ferry that would take us back across the Santa Barbara Channel to Ventura. So we decided to stay close to the beach at Scorpion Anchorage from which passengers were being ferried in dinghies to the actual ferry because the pier had been damaged in a storm.

We explored the rocky shoreline east toward Scorpion Rock.

END_OF_DOCUMENT_TOKEN_TO_BE_REPLACED

Back at Scorpion Ranch on the afternoon of May 29, 2016, Sean and Patrick and I went in search of more little foxes like those we’d seen in the morning before we’d set off on our hike.

The Santa Cruz Island Fox is one of six subspecies endemic to the Channel Islands of southern California. Although they are descended from the Gray Fox on the mainland, over thousands of years of isolation on the islands, the foxes have grown much smaller. They measure only about two feet from nose to tail, about the size of a house cat, and they weigh only three to six pounds. The six subspecies also differ from each other in terms of tail length, muzzle shape, and coloration.

END_OF_DOCUMENT_TOKEN_TO_BE_REPLACED

It was the afternoon of May 29, 2016, and our hike on the eastern end of Santa Cruz Island continued. Sean, Patrick, and I had already hiked from Scorpion Canyon out to the Potato Harbor Overlook. Now after picnicking there, we continued on our five-mile loop hike that would lead us to the top of Cavern Point and then back to Scorpion Canyon via a different route. Along the way we were afforded great views from the island’s three hundred foot high cliffs against the backdrop of a persistent marine layer over the Santa Barbara Channel.

END_OF_DOCUMENT_TOKEN_TO_BE_REPLACED

After our first encounter with the Santa Cruz Island Fox (on May 29, 2016), Patrick, Sean, and I set off on a hike to the cliffs above Potato Harbor. We would combine this hike with a return past Cavern Point, creating a pleasant, five-mile loop hike on the eastern edge of Santa Cruz Island, where the undulating landscape is slowly recovering from over a century of intensive ranching, including acres in crops and pastureland.

The plant species of eastern Santa Cruz Island are a mixture of common southern California coastal species, endemic species found only on Santa Cruz Island or some combination of the Channel Islands, common wild invasive species from the mainland, and purposefully cultivated invasive species leftover from the island’s ranching history The animal species tend toward the native, since the wild hogs and sheep and other domesticated animals have been removed. The removal of these farm animals has allowed the island flora to begin to recover after a century of grazing.

END_OF_DOCUMENT_TOKEN_TO_BE_REPLACED

Channel Islands National Park was established in 1980 by President Jimmy Carter. The National Park upgraded and expanded the earlier Channel Islands National Monument established in 1938 by President Franklin Roosevelt. The Park protects five of the eight islands in the California Archipelago off the coast of southern California: Anacapa and Santa Barbara (which comprised the original National Monument), Santa Cruz, Santa Rosa, and San Miguel. The Channel Islands, which were never connected to the mainland and are separated from the North American coast by deep underwater trenches, are called the American Galapagos because of their wealth of endemic species (at least 145 species of plants and animals found nowhere else on the planet).

During the last Ice Age, when sea levels were much lower, the four northernmost islands (San Miguel, Santa Rosa, Santa Cruz, and Anacapa) were connected as one huge island south of what is now the city of Santa Barbara. At that time, the distance from the mainland was much shorter, allowing mammals as big as mammoths and as small as mice to cross to the island. Birds, currents, and winds carried seeds to the island. After sea levels rose with the melting of the huge ice sheets, many of the species on the islands were cut off from both the mainland and the other islands, evolving into distinct species and subspecies.

END_OF_DOCUMENT_TOKEN_TO_BE_REPLACED

Our friend Patrick’s year in Los Angeles on a Getty Fellowship was the ideal opportunity to visit Channel Islands National Park, particularly since the ferry dock was less than an hour from his apartment and (even more importantly) he was keen to join us for a day trip. Our voyage across the Santa Barbara Channel would be the conclusion of a larger eleven-day trip visiting Patrick, Disneyland, and Yosemite National Park.

Logistically, we knew that we wanted to avoid either Disneyland or Yosemite on weekends, and going over to one of the Channel Islands on a Saturday or Sunday worked best for Patrick. As planning for the larger trip solidified, the Sunday of Memorial Day weekend, our final full day in California, became the best option.

The only remaining question was which of the Islands we would visit.